A MUM missing from her family and found in the sea has recalled seeing sharks' fins pass her before she was miraculously rescued.

Angelica Gaitan, 46, was found unconscious and suffering from hypothermia off the coast of Colombia after being in the sea for eight hours. 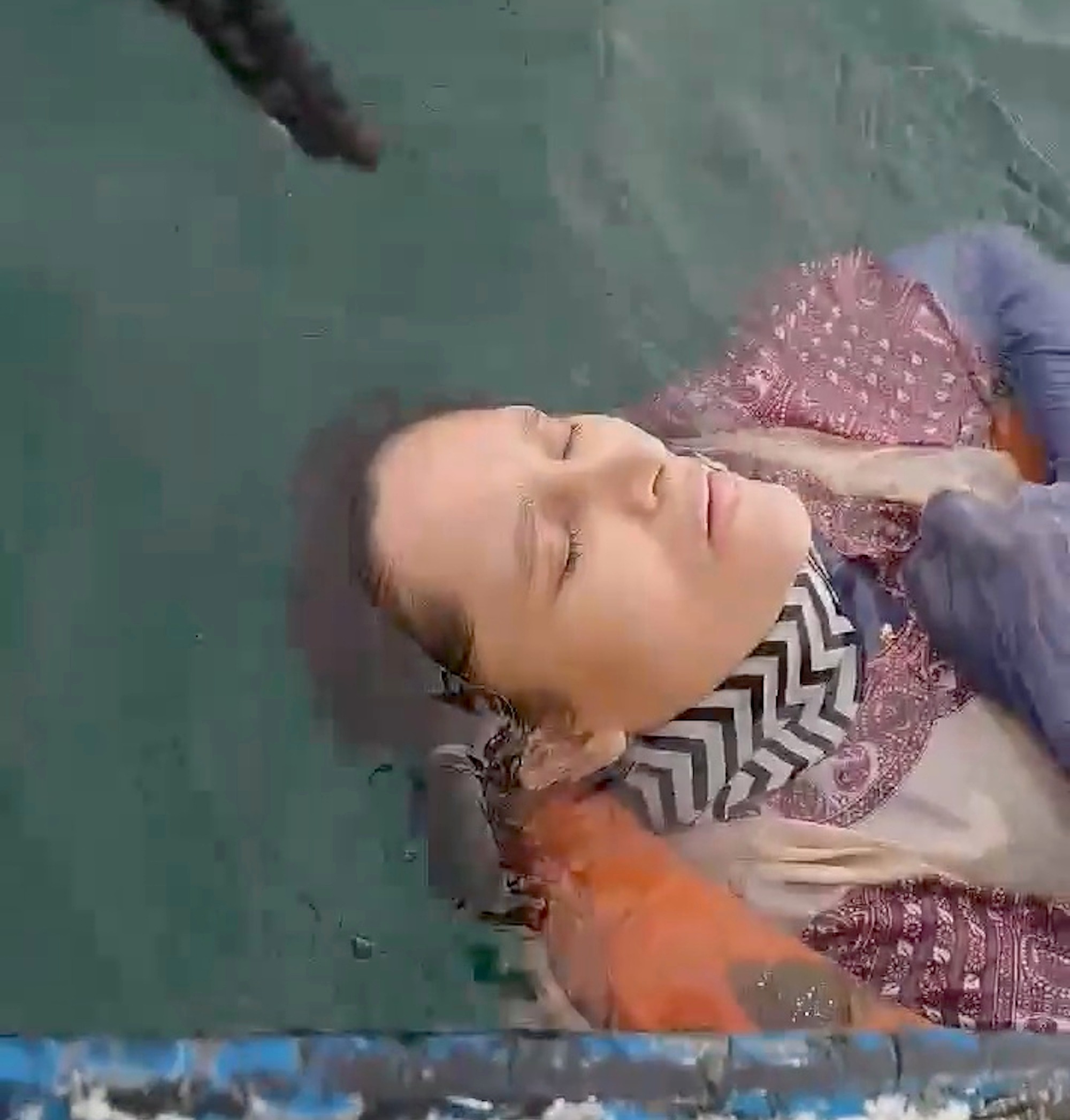 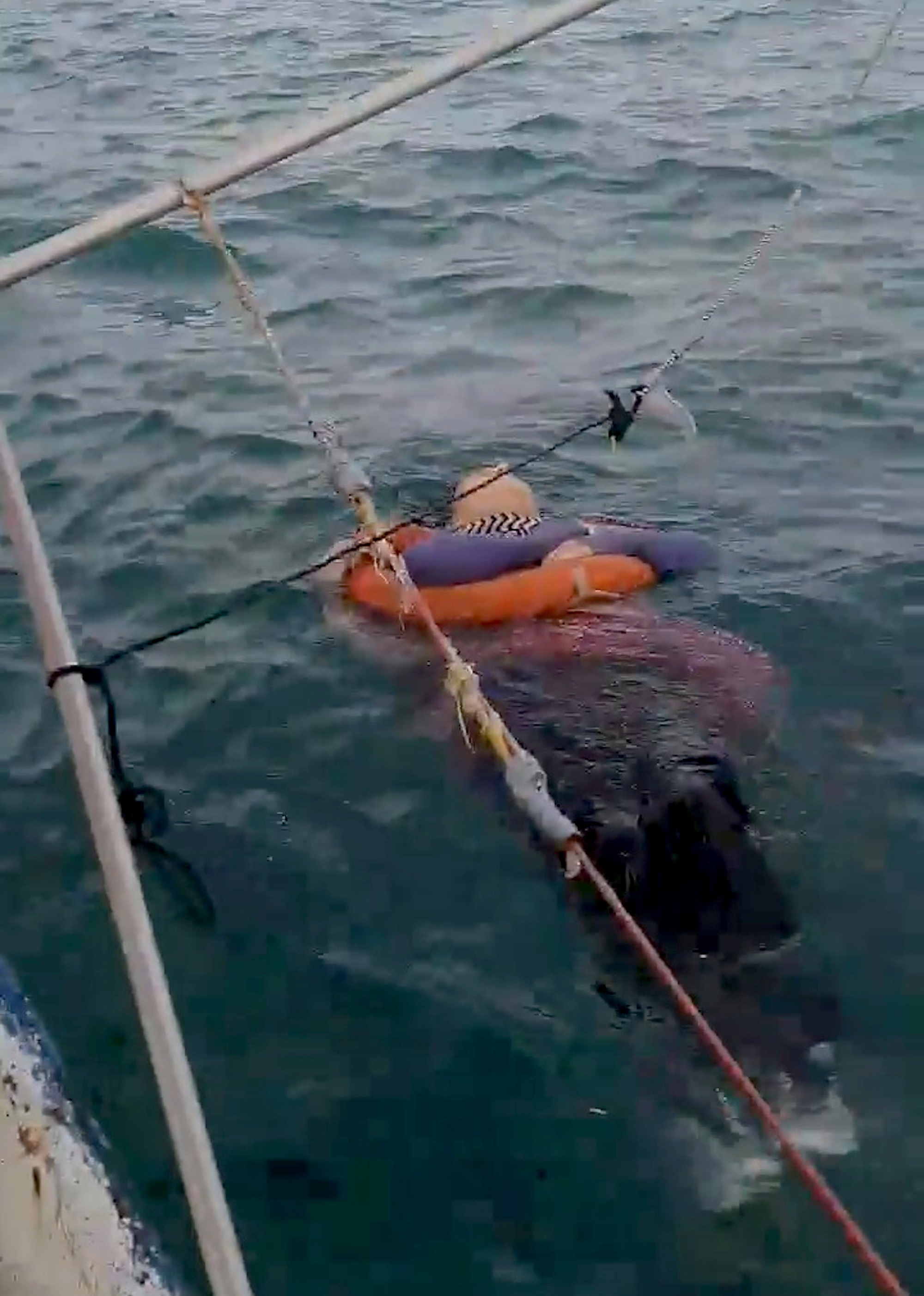 She was discovered by fisherman Rolando Visbal and a pal floating 1.2 miles off the town of Puerto Colombia on the Atlantic side of the country at around 6am on Saturday.

It reported her first words after being rescued were "I was born again, God did not want me to die" after she had jumped into the sea following mental health problems.

She was brought ashore where locals tended to her before she was taken to hospital.

Angelica was then reunited with her family as she told investigators what had happened to her since disappearing two years ago.

The Carribean sea where she was in is home to dangerous sharks, including tiger sharks and bull sharks.

During her time in the sea she said the creatures circled her as she drifted in and out of consciousness.

"I knew there are many sharks in that area and, I don't know if in a hallucination I felt that a fin passed very close to me, but it didn't stop," she said.

But then with time beginning to run out, she had a miraculous stroke of luck when she was spotted by the fisherman, who initially thought she was a log until she waved her hand to summon help.

Dramatic video shows the moment Rolando and a friend known only as Gustavo came across Angelica, who appears to be completely unresponsive. 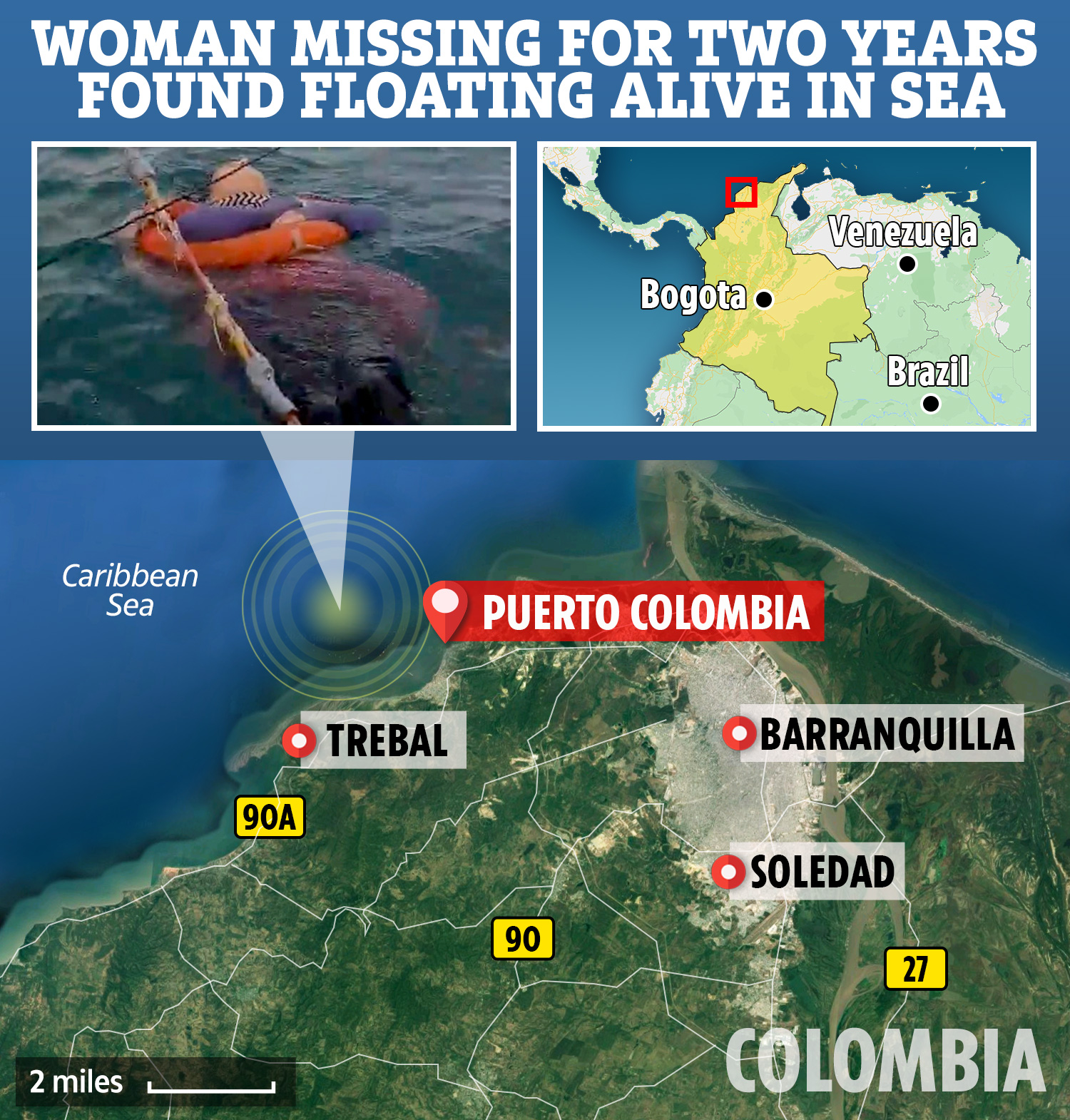 Rolando told Colombia’s Caracol Radio that they nearly didn’t go out fishing that day after problems with his boat's engine delayed an earlier trip.

“If we hadn’t had the problem with the spark plug on Friday, we would have gone fishing that day and the woman would be dead at sea,” he said.

“Gustavo warned me to be careful with the trunk and I began to turn about 15 degrees to the right, then to my surprise the trunk moved. I thought it was something supernatural.”

The video shows Angelica being dragged towards the boat in a lifebuoy the pair had thrown to her and which she had used her last ounce of energy to put on.

The pair attempt to have a conversation with her and give her water but Angelica begins to cry as the video comes to an end.

Rolando said Angelica didn’t say anything when they hauled her on to deck and was so weak he believed she would have drowned if she had spent any longer in the sea.

“So it turns out that I didn’t catch any fish that day either, but I fished a life. I think this was God’s purpose.”

Mystery continues to surround exactly what happened during the time her family lost contact with her, with her account of fleeing domestic abuse at the hands of her partner disputed by her daughter. 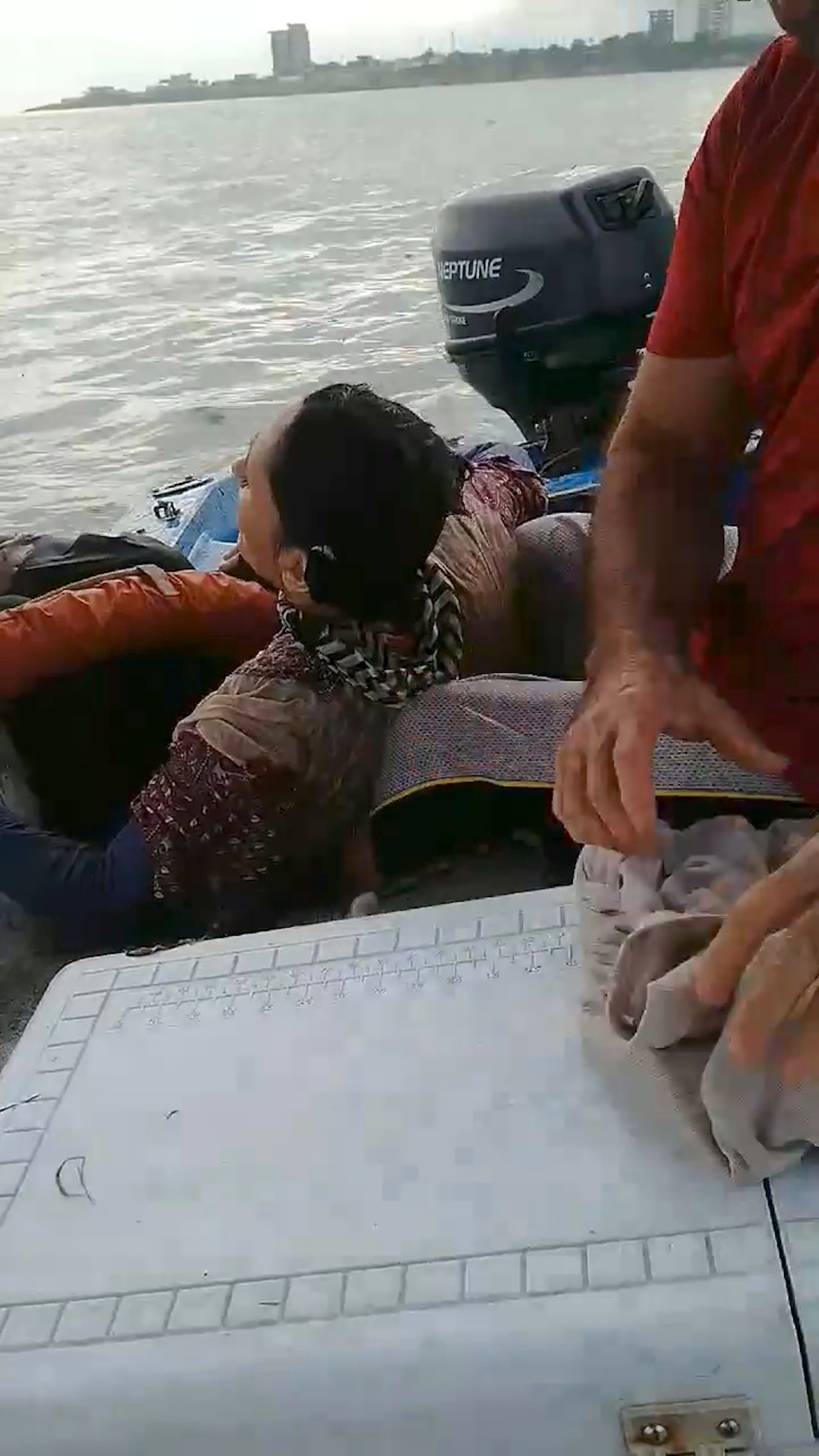 Angelica says that after living rough then being forced to leave a refuge, she decided to take her own life and threw herself into the sea.

"For 20 years I had a toxic relationship,” she told RCN radio.

“The abuse began in the first pregnancy, he beat me, he violently abused me.

“In my second pregnancy the abuse continued and I could not get away from him because the girls were small.

“Many times I reported it but the police took him away for 24 hours and when he was in the house again, the assaults returned.

“The day I decided to leave the house was after a brutal assault. In September 2018 he broke my face and tried to kill me. Thank God I managed to escape.”

She told local media she lived rough in the city of Barranquilla for six months before she sought help and was housed in a shelter.

But she was reportedly forced to leave because her partner was no longer living in the city, which sent her into a deep depression.

"I did not want to continue with my life. A lady lent me money for the tickets and I took a bus directly to the sea," she said. 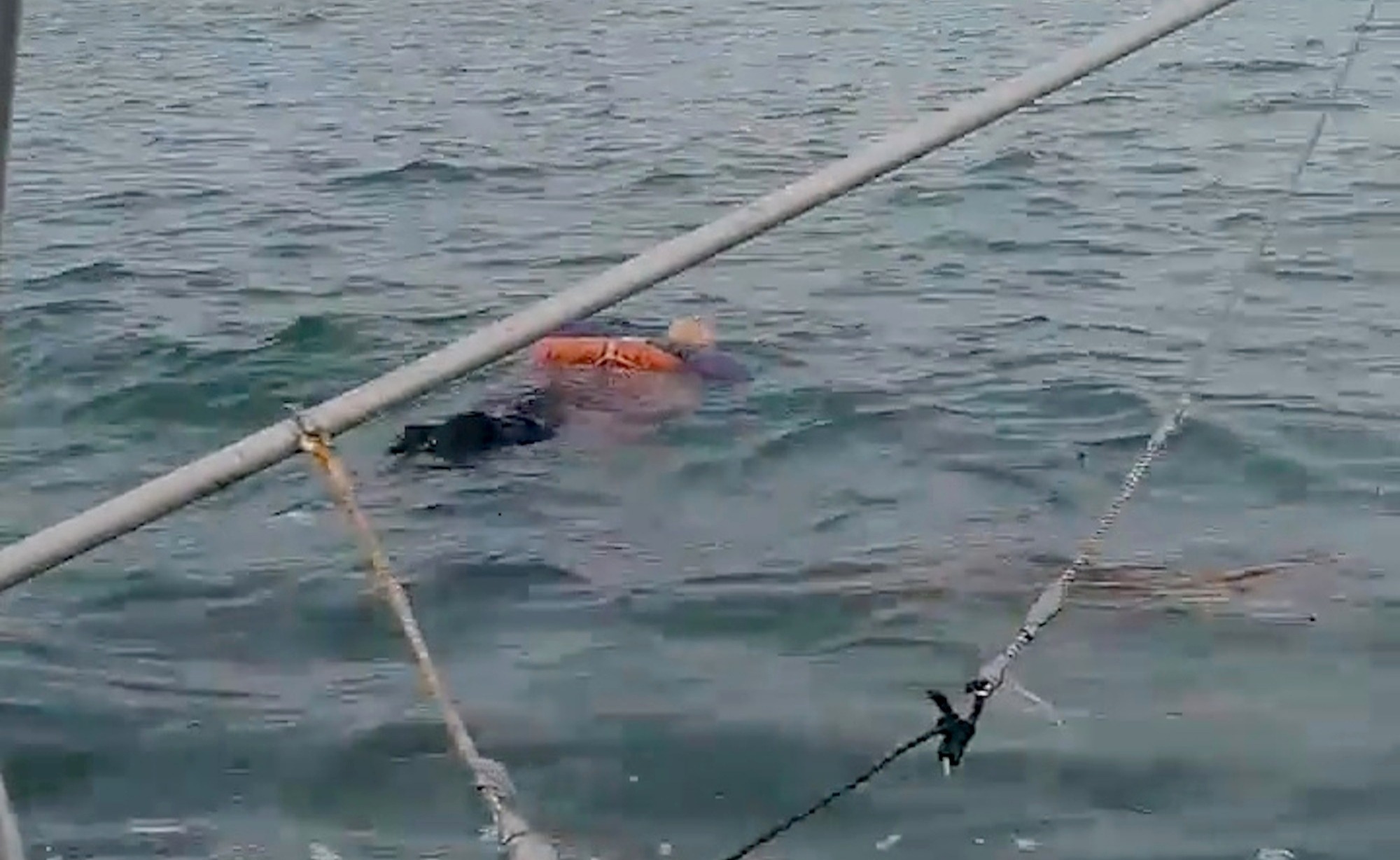 “I wanted to end everything, I had no help from anywhere not even from my family, because this man kept me away from my social circle, that's why I didn't want to continue living."

Angelica recalls "being on the seashore" and finding herself "in solitude", before she decided to jump into the sea.

"I let it take me and hoped that this nightmare would soon end," she said.

During her time at sea, she recalled the terrifying moment a shark passed by her as she drifted in and out of consciousness.

"The man who rescued me in the middle of the sea told me that I was unconscious, floating. Thank God I was alive, and he threw me a life preserver."

According to La Libertad, her family say they last heard from her in 2018 when she left to go to Ecuador to live with her brother.

The paper also reports that Angelica claims she was abandoned by her family after suffering domestic violence. 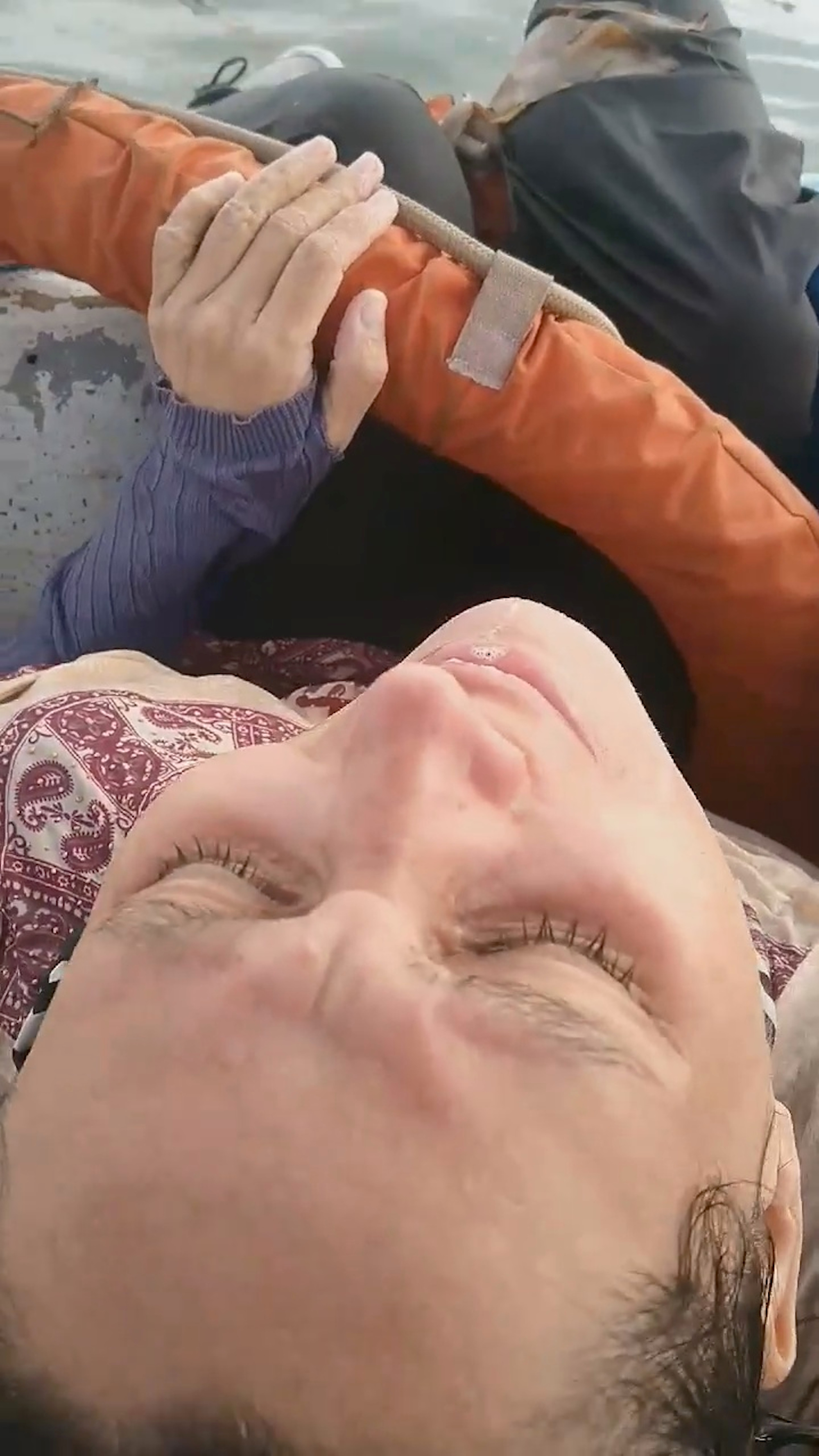 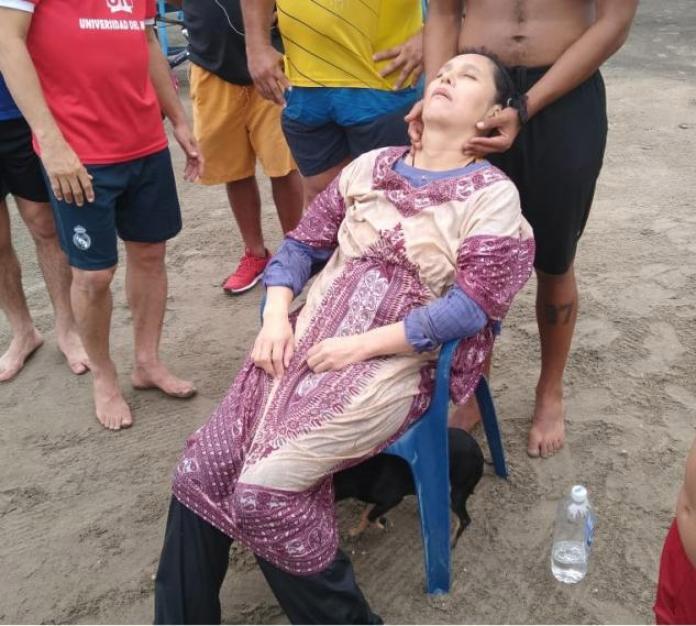 But her daughter Alejandra Castiblanco said she had not known about her mum’s whereabouts for the past two years.

She appeared to contradict Angelica's story, saying her father had never been abusive to her and that he has never lived in Barranquilla.

"We don’t know who attacked her, or how she ended up in the sea," said Alejandra.

She said that her mother suffered from heart problems for years, and that after a heart attack her mental health had deteriorated.

Alejandra also revealed her mother has a bizarre phobia of high-end cars that cause her to scream and panic, El Heraldo reports.

"Every time she saw a high-end car she would scream and say that they were coming for her , that we should not let her get on those cars," said Alejandra.

Castiblanco and her sister are currently raising money to bring their mum to the capital Bogota where they live and hope she will now be “taken care of by family”.

Seven men have been arrested on suspicion of ‘seizing or exercising control’ of a ship after an oil tanker was ‘hijacked’ yesterday. Hampshire Police says…