With meals often sold out in minutes, United We Eat @Home is transforming how local residents eat and how refugees support themselves.

Ghalia Ahmad Fayez AlMasri, a Syrian refugee, is one of 18 chefs who prepare meals for a United We Eat program in Missoula, Mont.Credit…Janie Osborne for The New York Times

MISSOULA, Mont. — Wearing a crisp gray chef’s coat over a pink sweater, Ghalia Ahmad Fayez AlMasri doled out instructions to her kitchen team as Egyptian and Lebanese dance music thumped from a cellphone’s speakers. On this Tuesday evening in March, Mrs. AlMasri’s crew of eight had 150 meals to prepare — a total sellout.

Around Missoula, a college town of 75,000, Mrs. AlMasri, 33, has become something of a minor celebrity chef. Customers in jeans and hefty boots had lined up outside in below-freezing temperatures to sample her baba ghanouj and halawa bi smeed, a pistachio-topped semolina pudding.

The kitchen she works out of, one of the city’s most popular, is housed in the nondescript basement of the First United Methodist Church on East Main Street. The dinners are part of a weekly program called United We Eat @Home, where refugees and other immigrants living in Missoula cook takeout meals to supplement their income. 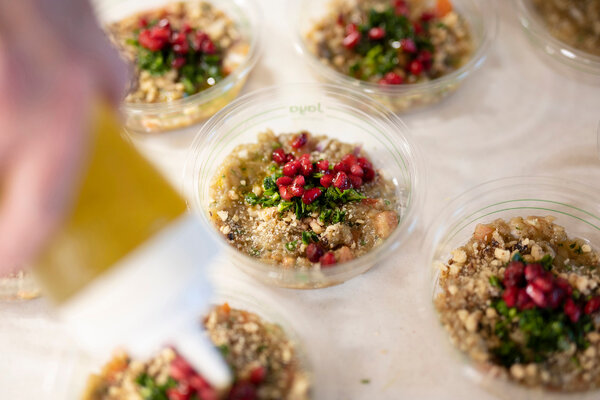 Started during the pandemic by Soft Landing Missoula, a nonprofit group that supports refugees and immigrants from around the world, the to-go meals have been exceedingly popular — more than 2,200 people receive the weekly menu by email on Thursdays at 9 a.m. When these notices hit inboxes, it’s a race against the clock: The meals have sold out every week, often in less than 30 minutes.

Their success prompted United We Eat to hire its first refugee staff member, Rozan Shbib, as a kitchen assistant last year. The program has also helped refugees apply for farmers’ market permits, and made it possible for Masala, a curry restaurant in downtown Missoula, to hire a staff almost entirely made up of refugees.

Mrs. AlMasri, who fled the conflict in Damascus, Syria, arrived in Missoula in 2017 with her husband and two sons, then ages 6 and 8. She is one of 431 refugees and nearly 100 Afghan evacuees who have been resettled in Missoula by the International Rescue Committee since 2016, and one of 18 home cooks participating in the United We Eat program.

Those cooks — from Syria, Afghanistan, Eritrea, Iraq, Pakistan, the Democratic Republic of Congo and elsewhere — face many of the same challenges as restaurant chefs. They plan their menus a month in advance to ensure enough time to order specific ingredients, such as halal meat, teff flour and Aahu Barah brand basmati rice. They consider how spicy a sauce can be without offending sensitive palates. They fret over whether their food will still look appetizing when diners get it home.

Facing a cluster of customers, Mrs. AlMasri gingerly nestled her meals inside the canvas tote bags they had brought. She arranged boxes filled with shakriya, a dish of tender chicken robed in a rich yogurt sauce over vermicelli pilaf; and zahrah, an intensely savory cauliflower stew. She stacked eight-ounce deli containers filled with baba ghanouj, explaining that the phrase means “spoiled daddy” in Arabic. Meat dishes are her best sellers — this is Montana, after all.

A few customers thanked her with the Arabic word “shukran.” The translation was written alongside a few other phrases in English and in Arabic script on a whiteboard near the serving table, encouraging Missoulians to communicate in Mrs. AlMasri’s native language and nudging them out of their comfort zones. “Bindura” means tomato; chicken is “dajaj.”

“It’s about shifting those power dynamics and making sure that in this space, this is the refugee chef’s sphere,” said Beth Baker, the program’s manager.

The cooks each earn an average profit of $850 per meal service. Selling meals of beef kofta, potato pakura and rote enabled Farida Abdul Aziz, 51, to send money to her son, Sohil, in Afghanistan. Cooking, she said, earns her “a lot of money,” which supplements the wages she makes working in deli department at a local Walmart.

“But not just the money is important,” Ms. Adbul Aziz said. “I’m enjoying the people.”

Ms. Abdul Aziz sought asylum in the United States in 2014, leaving her five children — including Sohil, her youngest, who was 12 — in Afghanistan. In early March, Sohil was granted entry under a U.S. Citizenship and Immigration Services program that reunifies families of refugees and asylum seekers. After eight years apart, mother and son embraced in a long hug at the Missoula Montana Airport. United We Eat shared the news in a subsequent newsletter, an effort to deepen customers’ familiarity with Ms. Abdul Aziz and her family.

Most customers recognize familiar chefs’ faces and look forward to specific cuisines. Their sole complaint: The meals sell out too quickly.

Jim Streeter, 72, a retired accounting and finance professional in Missoula, waits at his home computer for the Thursday morning emails. One week in February, even that didn’t work. Mr. Streeter walked downstairs to relay the coming week’s menu to his wife, Sara, but by the time he returned to the computer, it had sold out.

Customers say the meals offer culinary diversity they can’t find elsewhere. The Census Bureau estimated Missoula County’s population to be 91.7 percent white in 2021. If not for the United We Eat program, there would be no place for Missoulians to order Congolese, Pakistani or Guinean food.

Tri Pham, 49, a high school counselor who has ordered from United We Eat nearly every week since last fall, says his wife and daughters look forward to the variety. Slips of paper included with each order explain the dishes, their ingredients and the chef’s background. The biography included with Mrs. AlMasri’s meal mentioned her arrival in Missoula during a record-setting cold snap, and described how eggplants for baba ghanouj are typically roasted over an open flame for a slightly smoky flavor.

“We like exposing our girls to it so they have a broader worldview,” Mr. Pham said, “that it’s not just hamburgers and French fries.”

Soft Landing’s culinary program mirrors those in other states, like the New Arrival Supper Club in Los Angeles; Welcome Neighbor STL in St. Louis; Break Bread, Break Borders in Dallas; and Sanctuary Kitchen in New Haven, Conn. But given that Montana was one of only two states not accepting refugees when Soft Landing Missoula began in 2015, it’s been a particularly significant tool for cultural exchange.

“There’s so much more to the culture of these countries than just what people see on the news,” said Dave Erickson, 40, a staff writer at The Missoulian. “You hear that there are refugees here. But when you actually meet someone from the Democratic Republic of Congo, you realize ‘Oh, Missoula is home to an entire community of people from that country.’”

Mary Poole, the executive director of Soft Landing Missoula, wants Missoulians to see refugees and other immigrants as assets. Many of the newcomers aspire to open businesses, which the program supports through a Business 101 class at Missoula’s Lifelong Learning Center.

Owning a Syrian restaurant is Mrs. AlMasri’s goal. She is encouraged by the reputation she has earned for her to-go meals, and would like to serve a broader menu of kebab hindi, freekeh salad and khafeh.

“Some of them don’t know me, but they try my food, and next time they will know me,” Mrs. AlMasri said. “They’ll know my food.”