Moment smiling, relieved Ukrainians beam as they hug the soldiers who saw off Russian forces near Kharkiv – as world celebrates counter-offensive

Joyful footage showing women embracing Ukrainian soldiers in Kharkiv has been shared online as the counter-offensive continues to push forward.

In the clip, which has been viewed more than 34,000 times, a woman in a blue shirt can be seen running up to a solider, while another, in a lighter shirt, does the same.

The second woman approaches a solider sat on a wall wearing his uniform, a black vest and helmet, giving him a hug before she turns and approaches another soldier.

As the war in Ukraine marks 200 days, the country has reclaimed broad swathes of the south and east in a long-anticipated counter-offensive that has dealt a heavy blow to Russia.

Filmed approximately two days ago, the joyous women could be seen embracing the fighters warmly in Balakliia, a city in Izium Raion, in the province of Kharkiv. 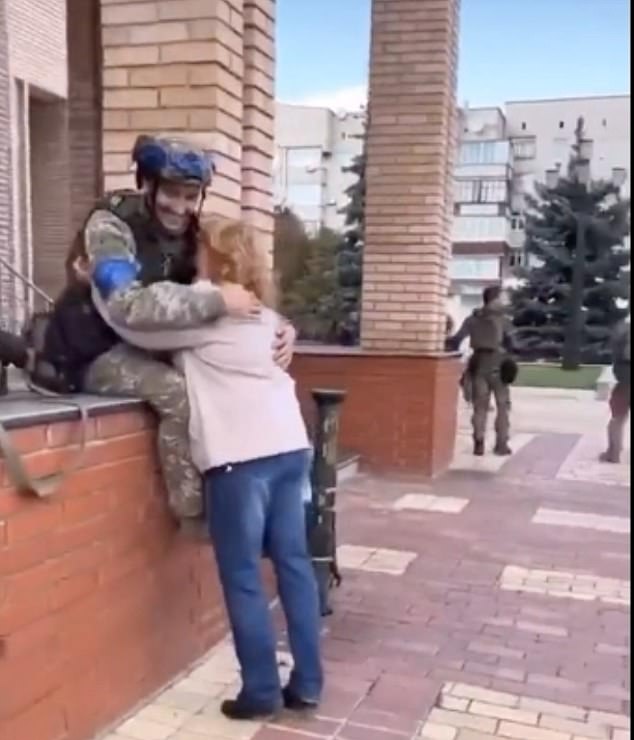 A woman approaches a solider sat on a wall wearing his uniform, a black vest and helmet, giving him a hug before she turns and approaches another soldier 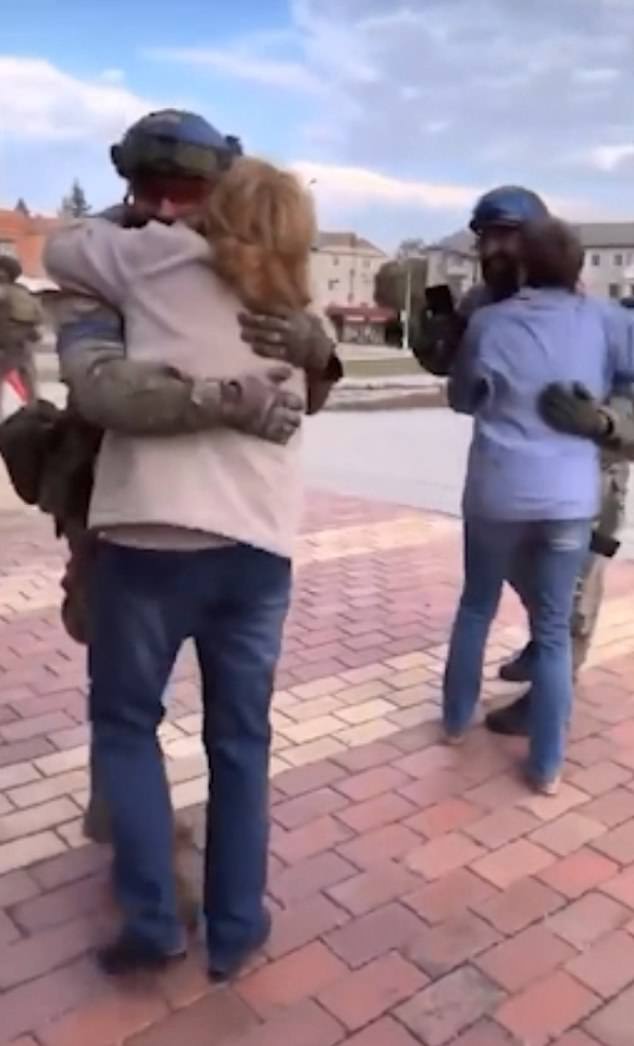 The two women warmly embraced the soldiers in Balakliia, a city in the province of Kharkiv 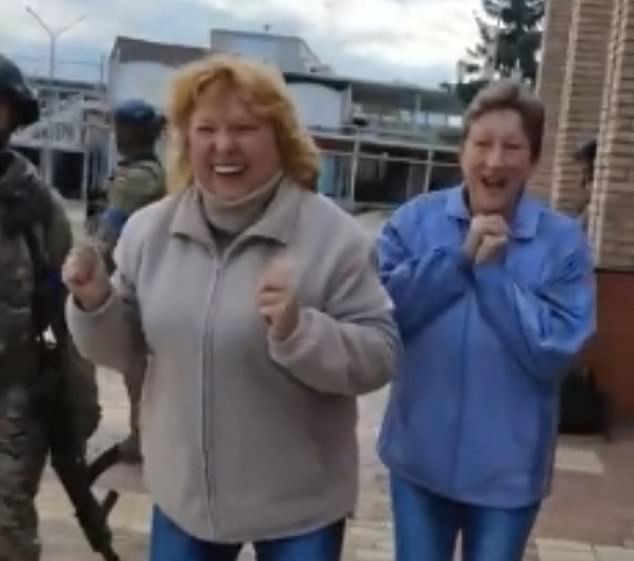 The women smiled broadly as they spotted the soldiers, following their counter-offensive

The clip was shared by Walter Report, which distributes live updates on Ukraine.

The counter-attack began in the final days of August and at first focused on the southern region of Kherson, which was swept by Russian forces in the opening days of the invasion.

But, just as Moscow redirected attention and troops there, Ukraine launched another, highly effective offensive in the north-eastern region of Kharkiv.

Facing the prospect of a large group of its forces becoming surrounded, Moscow ordered a troop pullback from Kharkiv, in a dramatic change of the state of play that posed the biggest challenge to the Kremlin since it launched the invasion on February 24. 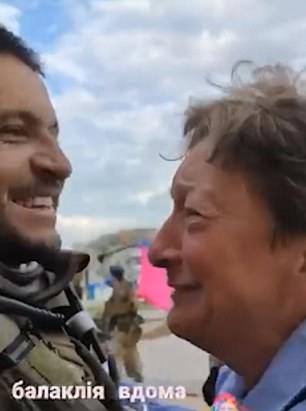 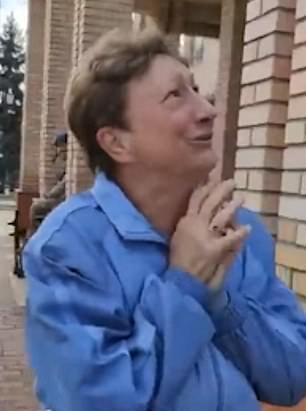 A woman smiles and hugs a soldier, clasping her hands in joy following the Ukrainian counter-offensive 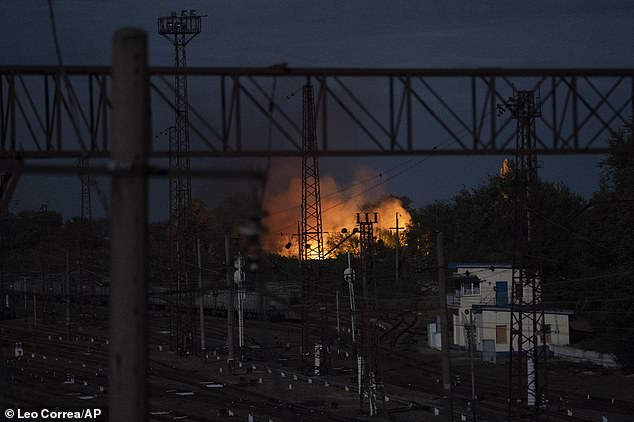 Flames rise from a fire following a Russian attack in Pokrovsk, Ukraine

Mykola Sunhurovskyi, a military expert with the Razumkov Centre, a Kyiv-based think tank, said: ‘The Ukrainian army has taken advantage of the relocation of the bulk of the Russian forces to the south and is trying to direct the course of the war, excelling in manoeuvre and showing great ingenuity.’

Ukraine’s quick gains, he added, are ‘important both for seizing initiative and raising troops’ spirit’.

Ukrainian President Volodymyr Zelensky commended the military in a video address late on Saturday, saying it has reclaimed more than 770 square miles (2,000 square km) of territory so far this month.

He also taunted Moscow over its withdrawal, saying the Russian army is ‘demonstrating the best it can do – showing its back’ and ‘they made a good choice to run’.

Both sides have suffered heavy losses in Europe’s largest conflict since the Second World War. 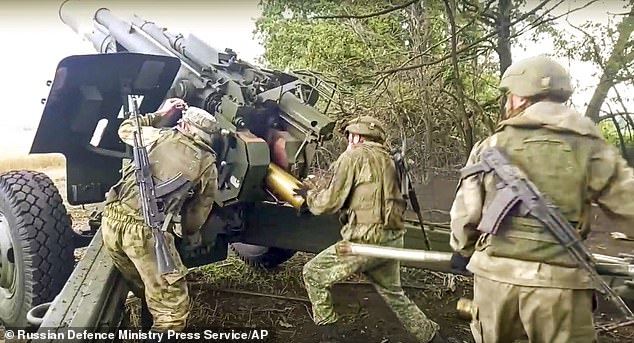 Ukraine’s military chief said last month that nearly 9,000 of the country’s soldiers have been killed in action.

While Moscow has not reported its own losses since March, Western estimates put the toll as high as 25,000 dead, with the wounded, captured and deserters taking the overall Russian losses to more than 80,000.

Ukraine has sought to mobilise the population to reach an active military of one million people, while Russia, in contrast, has continued to rely on a limited contingent of volunteers for fear that a mass mobilisation could fuel discontent and upset internal stability.

As the war slogs on, a growing flow of Western weapons over the summer is now playing a key role in the counter-offensive, helping Ukraine significantly boost its precision strike capability.

Since the counter-offensive began, Ukraine said, its forces have reclaimed more than 30 settlements in the Kharkiv region.

In the Kherson region, troops sought to drive Russian forces from their foothold on the west bank of the Dnieper River, a potential vantage point for a push deeper into Ukraine by Moscow.

The city of Kherson, an economic hub at the confluence of the Dnieper and the Black Sea with a pre-war population of about 300,000, was the first major population centre to fall in the war.

Russian forces also have made inroads into the Zaporizhzhia region farther north, where they seized Europe’s largest nuclear power plant. The last of its six reactors was shut down on Sunday after operating in a risky ‘island mode’ for several days to generate electricity for the plant’s crucial cooling systems after one of the power lines was restored.

Moscow has installed puppet administrations in occupied areas, introduced its currency, handed out Russian passports and prepared for local plebiscites to pave the way for annexation. But the counter-offensive has derailed those plans, with a top Moscow-backed official in Kherson saying the vote there needs to be put off.

Ukrainian forces have used American-supplied Himars multiple rocket launchers to pound the two bridges across the Dnieper, forcing Russian troops in the Kherson region to rely on pontoon crossings that also have faced daily strikes. 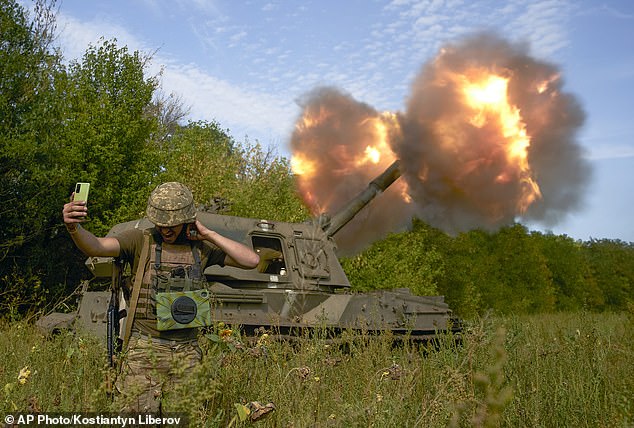 A Ukrainian soldier takes a selfie as an artillery system fires in the front line in Donetsk region, eastern Ukraine, on Saturday, September 3

Last month, a series of explosions also hit air bases and a munitions depot in Crimea, underlining the vulnerability of the peninsula that was annexed by Russia in 2014 and has been crucial for its southern operations.

Ukrainian authorities initially refrained from claiming responsibility, but the country’s military chief, General Valerii Zaluzhnyy, acknowledged in recent days that his forces hit them with rockets.

Ukrainian military analyst Oleh Zhdanov said: ‘Ukraine has used the tactics of methodically exhausting the Russian army, weakening it and depriving it of a possibility to regularly beef up its forces.’

Unlike in the south, where Ukraine’s counter-offensive proceeded more slowly on the barren steppes of Kherson that left troops vulnerable to Russian artillery, the Kharkiv region’s forests offered natural cover that allowed for lightning-fast surprise attacks from multiple directions.

‘Swiftness and surprise have become key components of the Ukrainian army action in the Kharkiv region after Russian forces deployed there had been relocated to the south,’ Mr Zhdanov said.

Michael Kofman, an expert on the Russian military at the Virginia-based think tank CNA, said the counter-offensive ‘has proven a very significant victory for Ukraine’.

‘Russian forces appear to have been spread thinly, and military leadership unprepared despite earlier evidence of Ukrainian build-up,’ he wrote. ‘I think it’s fair to assess that Russia was caught by surprise with little in the way of reserves locally available.’ 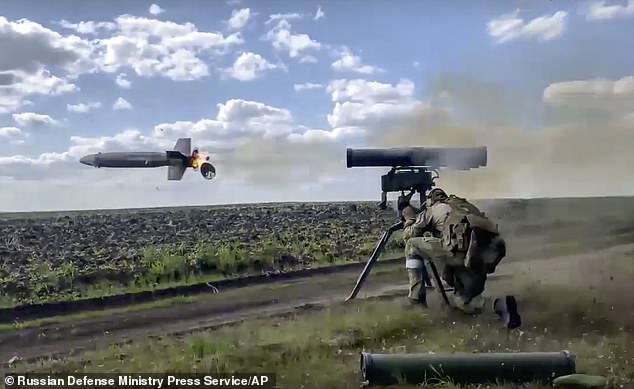 After capturing the town of Balakliia, about 34 miles (55km) south-east of Kharkiv, Ukrainian forces quickly pressed their offensive further east to Kupiansk, a rail hub vital for sustaining Russian operations in the region.

They claimed control of the strategic city on Saturday, cutting supply lines to a big group of Russian forces around Izyum to the south.

To prevent their complete encirclement, Moscow ordered the hasty retreat, claiming that they were relocating to focus on the neighbouring Donetsk region.

Mr Zhdanov noted that a successful counter-offensive is key to persuading allies to further increase supplies of weapons to Ukraine, something that was discussed at a Nato meeting in Germany on Thursday.

‘The events in the south and in the Kharkiv region must show to the West that the Ukrainian military know to handle the weapons and need to develop their success,’ he said.