This is the moment Spanish police seized 2.9 tonnes of cocaine after intercepting a fishing trawler off the Canary Islands with the substance hidden in one of its fuel tanks.

The 65-foot AKT 1 was stopped on April 13 by a Spanish coastguard patrol about 300 nautical miles south of the Spanish archipelago as it tried to pass itself off as another fishing boat.

It is estimated that the confiscated cocaine would sell on the street for 72 million euros (£60million). 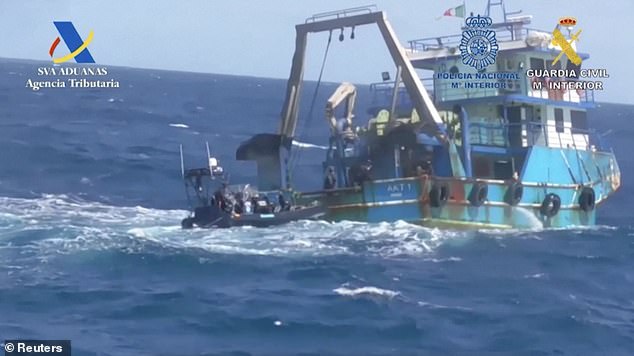 The boat was returned to Gran Canaria on Saturday and the five detainees were escorted to Port of Las Palmas and remanded in custody.

A spokesperson for the Spanish civil guard said: ‘When we boarded, (officers) observed the fishing boat was transporting a significant number of bundles usually used for cocaine trafficking.

‘The five crew members of the boat – four of Turkish nationality and a Georgian citizen – were immediately arrested.’

Police released footage of the operation on Sunday 17 April, showing customs officers speeding after the rusted out fishing trawler before boarding the vessel and discovering blocks of the illicit substance hidden in fuel tanks. 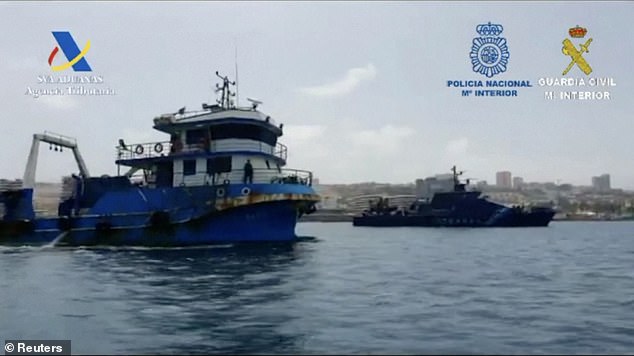 The 65-foot AKT 1 (pictured) was operated by four Turks and a Georgian and had 2.9 tonnes of cocaine hidden in one of its fuel tanks 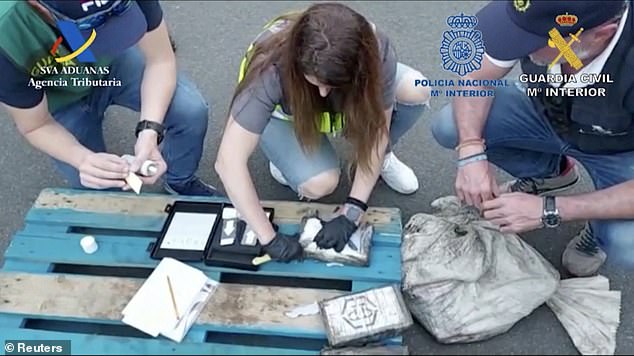 Back on terra firma, three agents crouch over the white blocks, unwrapping one and rubbing a small square of paper over the contents.

A spray on the paper immediately turns it blue – a quick indication that the substance is positive for cocaine.