Shocking video shows the moment a woman was struck by a car that then sped off with her clinging to the hood during a protest over an alleged attack on a Black man in Indiana.

Police say they are searching for the hit-and-run driver of the red Toyota Corolla that plowed into the woman on a street in Bloomington on Monday night.

Witness Rodney Root posted a brief clip of the incident on Twitter which shows the woman on the hood and a man holding onto the driver’s-side mirror while the car drives away.

‘This was right after the Black Lives Matter protest had broken up,’ Root told CNN.

‘There was a man attempting to hold traffic with an electric scooter and the passenger of the car got out, slammed the scooter to the ground and got back in.

‘A lady ran up to confront the car and the car struck her and sped off at full speed. I was so shocked I started chasing and stopped the video.’ 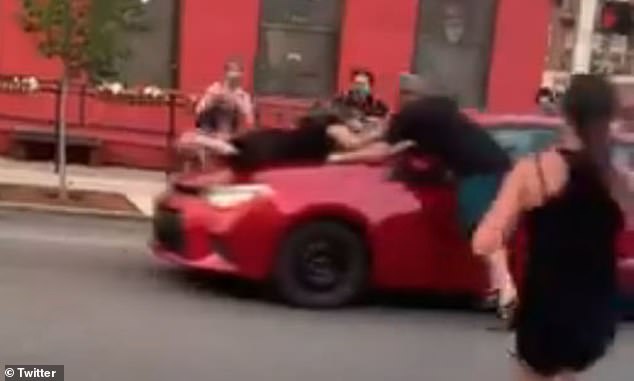 Shocking video shows the moment a woman was struck by a car that then sped off with her on the hood during a protest over an alleged attack on a Black man in Bloomington, Indiana 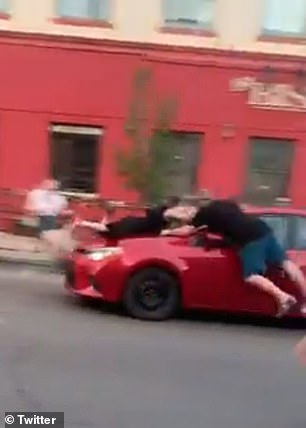 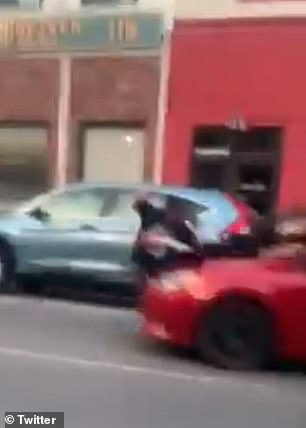 A man named Rodney Root posted a brief clip of the incident on Twitter which shows the woman on the hood and a man holding onto the driver’s-side mirror while the car drives away. Witnesses said the protesters had tried to block the car on the street

A second video shared on Facebook by Jaren Vaught shows more of what Root described.

A man is seen stepping out of the car with a furious expression before throwing the electric scooter to the side as onlookers say: ‘Hey, come on man,’ and ‘What are you doing?’

The person filming points the camera at the ground and appears to walk toward the car before people are heard shouting in alarm.

Shrieks ring out as the camera pans up to the car driving off. The woman on the hood is not visible from behind, but the footage does show the leg of the man hanging onto the side mirror.

About a dozen people, some of them holding signs with Black Lives Matter slogans, are seen chasing the car down the street before the video cuts off. 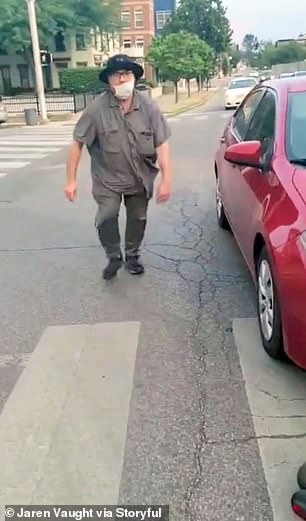 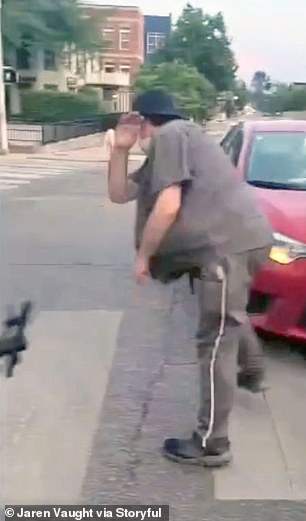 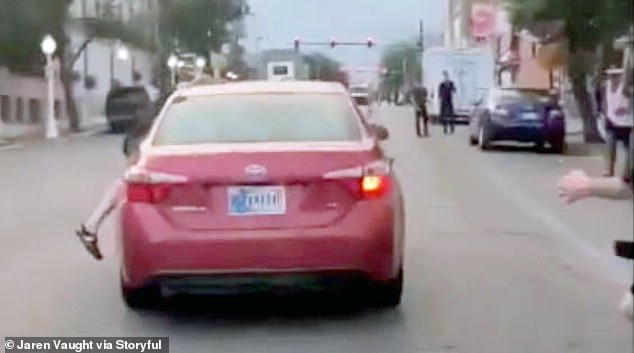 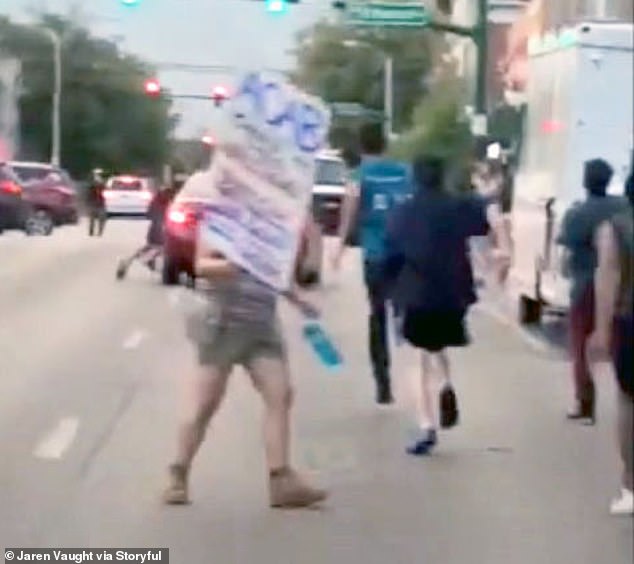 A livestream from WRTV shows the woman being place in an ambulance minutes later. The extent of her injuries is unclear.

The man who was hit, Geoff Stewart, later explained the incident to the news outlet.

‘A woman driving the vehicle came up to the stop and had started revving her engine toward us and we tried to stop her and let her know that the crowd is clearing up just wait a second,’ Stewart said.

‘But, she and her passenger both wanted to go right away – so, they started to push, they pushed into the woman that was with me and when she pushed again both of us went on the vehicle.’

Stewart said once the car started moving down the street he tried to block the driver’s vision so she would slow down.

‘I tried to pull myself as far in her way to kind of obstruct her view. She drove through red lights and made her turn up here that threw both of us off the car,’ he said.

The protest that preceded the hit-and-run was organized in response to a Black man’s claims that he was attacked by a group of white men who accused him and his friends of trespassing on private property at a lake in Bloomington on Saturday. 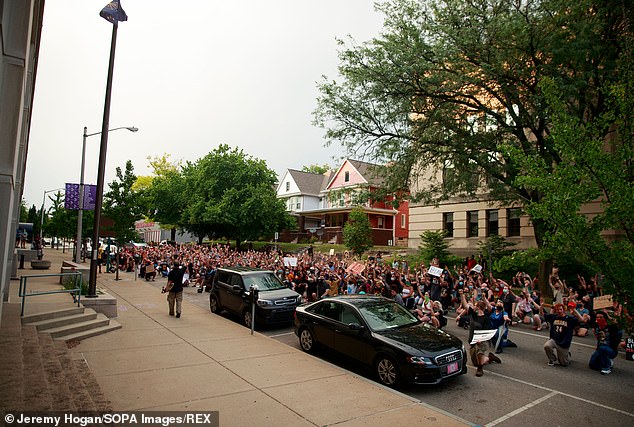 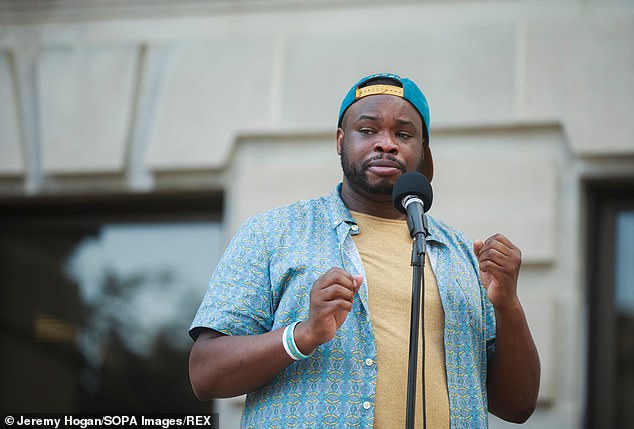 Vauhxx Booker, a local civil rights activist and member of the Monroe County Human Rights Commission, posted about the alleged attack on Facebook. He is seen speaking at the protest on Monday night

Vauhxx Booker, a local civil rights activist and member of the Monroe County Human Rights Commission, posted cellphone video on Facebook that shows part of the altercation at Lake Monroe.

Booker called the attack an ‘attempted lynching’ and claimed that the men threatened to kill him, although the video does not show any death threats.

One video clip shows a white man holding Booker up against a tree. Another depicts a different man calling someone off-camera a ‘nappy headed b***h.’

In third clip the same man yells: ‘You invaded us!’ and calls someone in Booker’s group a ‘stupid f**king liberal f**ks.’

As Booker’s friends leave, one of the men follows them shouting: ‘Those Black boys want to start it all.’

In his Facebook post, Booker said that he apologized after the men told him they were trespassing, but that five white men then attacked him.

Booker wrote that the men threatened to break his arms and said: ‘Get a noose,’ while telling his friends to leave the area.

He also said one of the men had a hat with a Confederate flag on it and that the men made statements about ‘white power’.

The videos do not depict anyone saying: ‘Get a noose’ or mentioning ‘white power’. 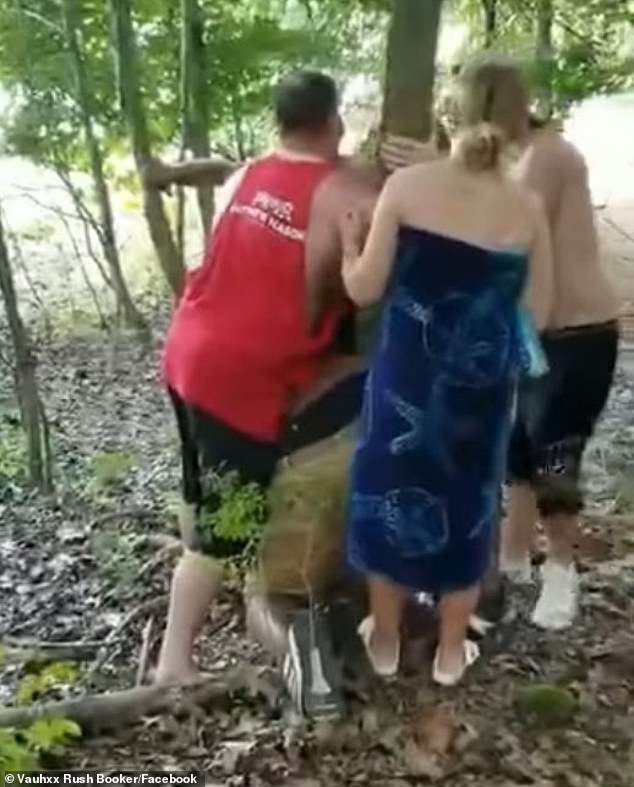 Booker posted cellphone video on Facebook that shows part of the altercation at Lake Monroe, including a clip where the white men appear to pin him to a tree 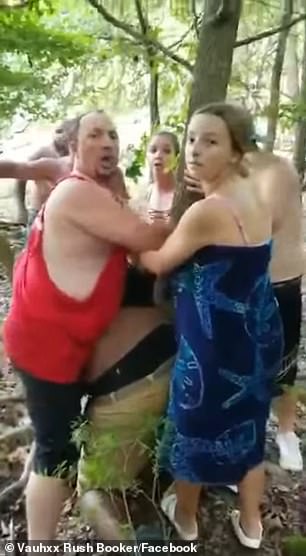 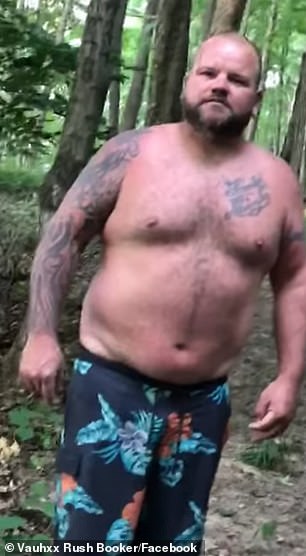 Booker claims he was attacked after the group accused him and his friends of trespassing. In one clip a man (right) is heard calling  someone off-camera a ‘nappy headed b***h’

Booker said he called 911 after the altercation and law enforcement officers with the Indiana Department of Natural Resources responded to the scene.

Capt Jet Quillen said that the department is still conducting an investigation and will send its final report to the Monroe County Prosecutor’s Office.

Quillen declined to offer additional details about what happened or whether any arrests have been made.

Booker, who attended Monday’s protest, said he suffered a minor concussion, cuts, bruises and had patches of his hair pulled out.

‘We were calm and polite, but looking back now, it’s apparent that these individuals began targeting our group the moment they saw myself, a Black man and were looking to provoke a conflict,’ he wrote in his Facebook post.

Bloomington Mayor John Hamilton and Bloomington City Clerk Nicole Bolden issued a statement Monday expressing their ‘outrage and grief’ over what they said was a racially motivated attack.

State Sen Mark Stoops, a Bloomington Democrat, said he was ‘horrified by the racist attack’ and called on Republican  Eric Holcomb to suspend and investigate the Department of Natural Resources officers who responded to the scene for failing to make any arrests.

‘This is not just an issue of violence,’ Stoops said in a statement Monday. ‘This is clearly a hate crime and must be treated as such.’

In 2018, Booker spoke out after a Bloomington Transit employee accused Booker of stealing a bus pass shortly after he bought a ticket.

Booker said the employee sold him the pass, then could not find proof of the transaction and called the police.