Australia has experienced the most deaths from drowning in 25 years, with the latest data showing 339 people perished in floods, rivers, pools, dams and seas.

Men continued to be overrepresented in drownings, with 278 men and boys dying in the year to June 2022, reports by the Royal Life Saving Society and Surf Life Saving found.

Chief executive of Royal Life Saving Australia Justin Scarr said he was deeply saddened by another tragic increase in drowning caused by the “pandemic and the wet, hot weather combining to create a terrible year for drowning on waterways”.

Injuries – including drownings, road crashes and falls – result in 13,400 deaths and 520,000 hospitalisations in Australia every year, and are the top cause of death for people aged one to 44.

This week, the Bureau of Infrastructure and Transport Research Economics reported that deaths on the roads had also risen, up 4.1 per cent to 1172 in the year to August 31. That included a 4.4 per cent rise in NSW and a 19 per cent increase in Victoria.

The drowning statistics, released on Friday, found nearly a third of fatalities were among older Australians; 94 people over 65 died, a 34 per cent increase on the previous year. Coastal drownings rose 13 per to 141 fatalities, and 43 people (or 14 per cent) drowned in flood-related incidents. 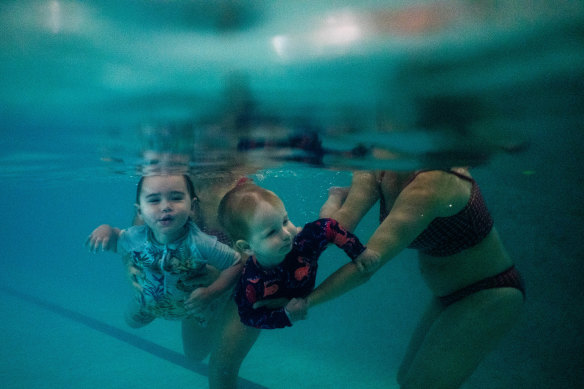 Swimming lessons have declined during the pandemic, but here Tomas De Foxa Ducat and James Radman are seen during their water safety lessons at Speedo Swim Centre in Bondi in February this year. Credit:Janie Barrett

After trending down for years, drownings rose during the pandemic. But this year was the worst since 1996 when 342 fatally drowned, Scarr said.

Drowning rates were as bad on the coast as they were inland. Surf Life Saving’s general manager of coastal safety Shane Daw said the 141 coastal drowning deaths were the most reported since the organisation started collecting this data 18 years ago.

Considering that during COVID beach visits were down, international visitors were absent and the weather over summer had been terrible, the result was even worse than it appeared, Daw said.

Surf Life Saving performed 8600 rescues – fewer than the usual 11,000 a year – because swimmers were often visiting unfamiliar and more remote beaches that were not patrolled.

“Because of COVID, people were looking for more remote beaches where services won’t be alerted until it is potentially too late,” Daw said.

The toll included 39 people who drowned in floodwaters, a trend expected to increase with continuing floods forecast. As well as those who died, 686 non-fatal drownings were reported. These can result in lifelong injuries.

Scarr was shocked by the number of drownings in older people. “On the one hand, it is fantastic that people are out and about on waterways. Older people, particularly men, need to take precautions before pursuing their love of water.”

The cancellation of swimming lessons during COVID was reflected in a 7 per cent increase to 15 drowning deaths among children aged five to 14.

In 1996, the deaths of 68 children aged zero to four from drowning was described as a national tragedy. In the past year, 17 children of that age drowned.

Scarr said the fall in drownings reflected laws that mandated pool fencing and the wearing of lifejackets.

“We can’t put fences around lakes and rivers,” he said. Nor could they fence the coastline, Daw said.

Scarr and Daw said their organisations were increasingly using customised campaigns to target groups at risk, including men and boys.

Royal Life Saving, for example, was getting involved in social media pages dedicated to fishing.

“Funnily, [members] might accuse us of being the fun police,” said Scarr. “But in many ways that is the best place to have a conversation about safety. There is something in male DNA that likes to take risks, and combines that with mateship, drinking and alcohol. And we need to target the sensible males in the group.”

Daw said Surf Life Saving was looking for water safety champions, and other ways to reach men at risk of drowning. He said a campaign targeting fathers would have to be very different from those designed for young men. It might feature children asking their father to wear a lifejacket, so they can come home safely.

Daw said their campaigns tended to talk about how to do something without getting in trouble. “Nobody likes being told what to do,” he said.