Shocking moment girl, 10, is mowed down on her way home from school by mother-of-three who had been banned from driving – as victim’s family slam decision to SPARE her jail over hit-and-run 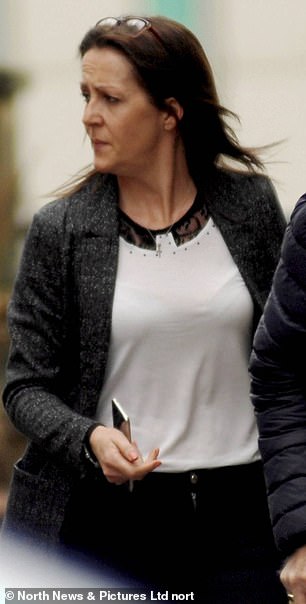 This is the shocking moment a mother banned from driving mowed down a 10-year-old girl before driving off and leaving her unconscious in the road.

Bobbie Tighe was making her way home from school as she crossed Redcar Road in Sunderland on November 6 last year when Joanne Beven’s car hit her.

The 41-year-old mother-of-three was driving despite having been banned from the roads a year earlier and her brakes not working properly.

After crashing into the young girl she drove off but later handed herself in to police.

Newcastle Crown Court heard how little Bobbie was left in a wheelchair and needing counselling after her traumatic ordeal.

But her family were horrified when the judge gave Beven a suspended sentence.

CCTV footage shows the youngster being knocked sideways and thrown into the air before horrified passersby come to her aid.

Mr Perks said: ‘She doesn’t stop in what clearly was an obvious impact on a young child.

‘The child was still unconscious when her mother arrived. She was in a great deal of pain.

‘She was attended to immediately after the accident by a member of the public.’ 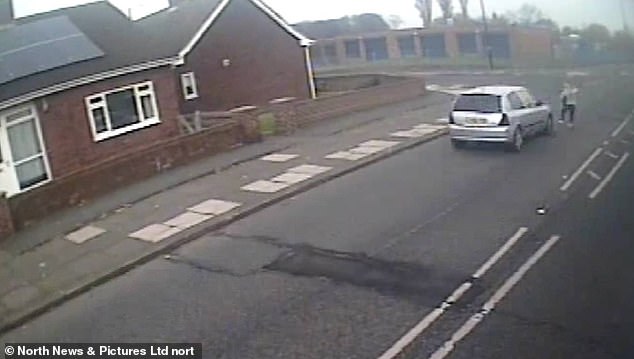 Mr Perks told the court how Bobbie’s mother Samantha said the family have had to make several visits to the hospital and that the injures have had a devastating impact on her daughter.

Mr Perks said: ‘She’s had a period of time where she’s had to be in a wheelchair unable to walk.’

He told the court how an investigation was made by the child’s mother and the vehicle Beven had been driving was found on a driveway.

It was missing a wing mirror, which had been left at the scene, and the number plates had been removed.

Mr Perks said Beven then took it upon herself to tell the police what had happened and agreed to be interviewed by officers.

He told the court how the vehicle was in a dangerous condition and the brakes were damaged. 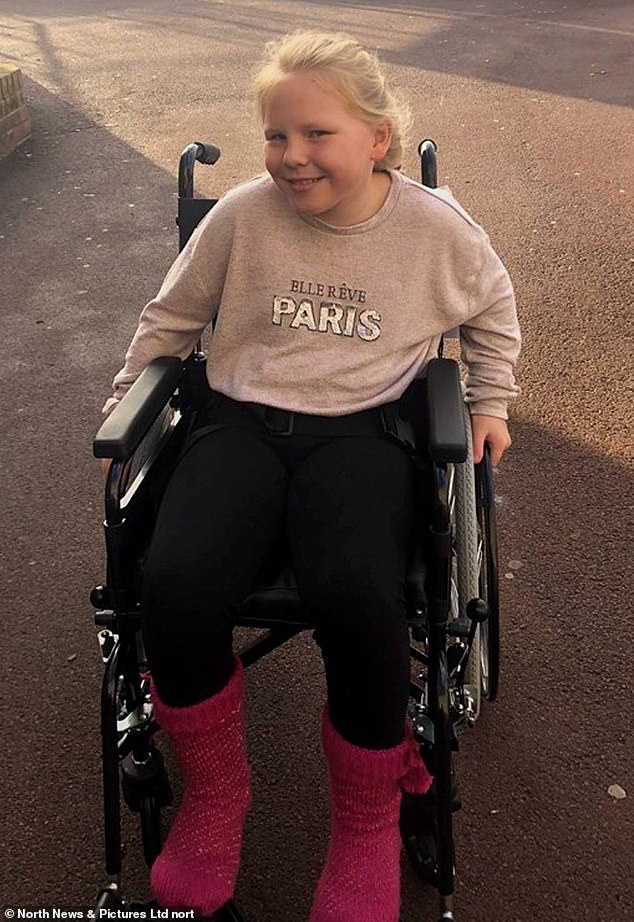 Mr Perks told the court how Beven was banned from driving at the time of the collision after being disqualified by a court for 18 months in October 2017.

Vic Laffey, defending, told the court: ‘I think what has to be said from the outset is Joanne Beven does deeply regret what has happened to this young girl.

‘She’s 41-years of age and she has three children of her own and one is virtually the same age as this little girl.

‘Clearly she has made two very serious errors. The most obvious one being driving at all when one is disqualified, and driving the vehicle in the condition that this one was.

‘She had the good sense to contact the police and go into the police station and admit her guilt.’ 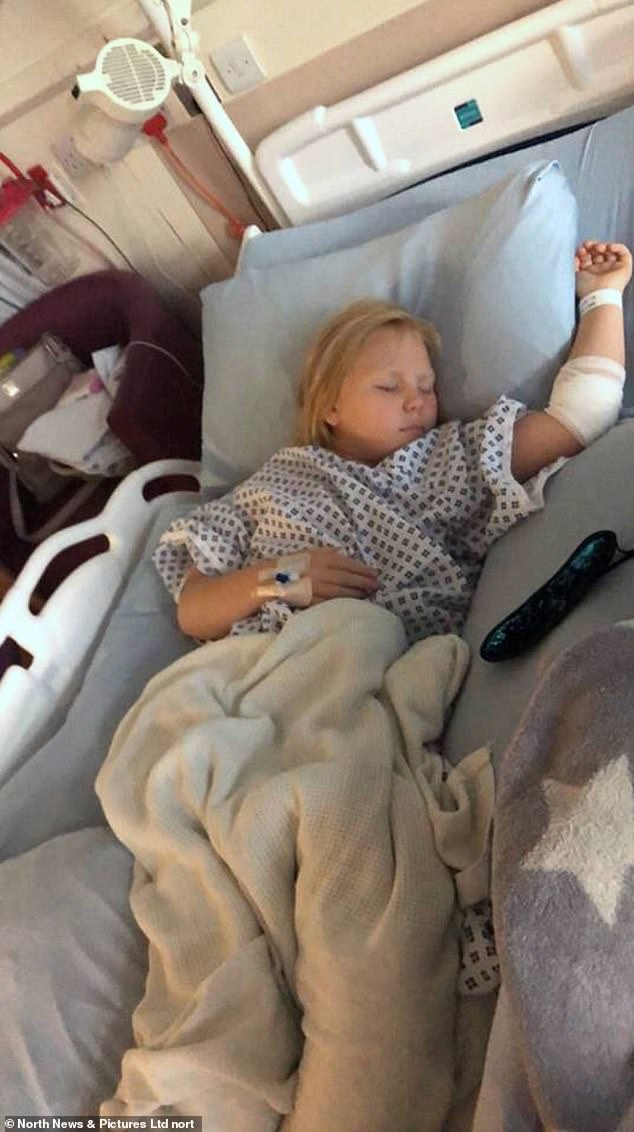 Bobbie, 10, is pictured recovering from the crash in hospital. She still needs counselling

Mr Laffey told the court how Beven had been suffering from mental health problems and personal problems.

He said she did not want to rely on her 71-year-old father or eldest daughter to look after her two young children if she was handed a prison sentence.

Mr Laffey told the court how they both lived ‘some distance’ from where the children were settled.

He said: ‘It will also punish her children. They will be punished for what she has done.’

The judge, Recorder John Aitken, told Beven: ‘You mowed down a 10-year-old girl happy to be going home after a day at school.

‘You then compounded what had happened by simply driving off. Nothing noble comes out of this at that stage.

‘Her mother was there when she woke up screaming in pain, knowing that your car had just drove off.’

Mr Aitken said a major factor he had to take into consideration was that Bobbie will fully recover. 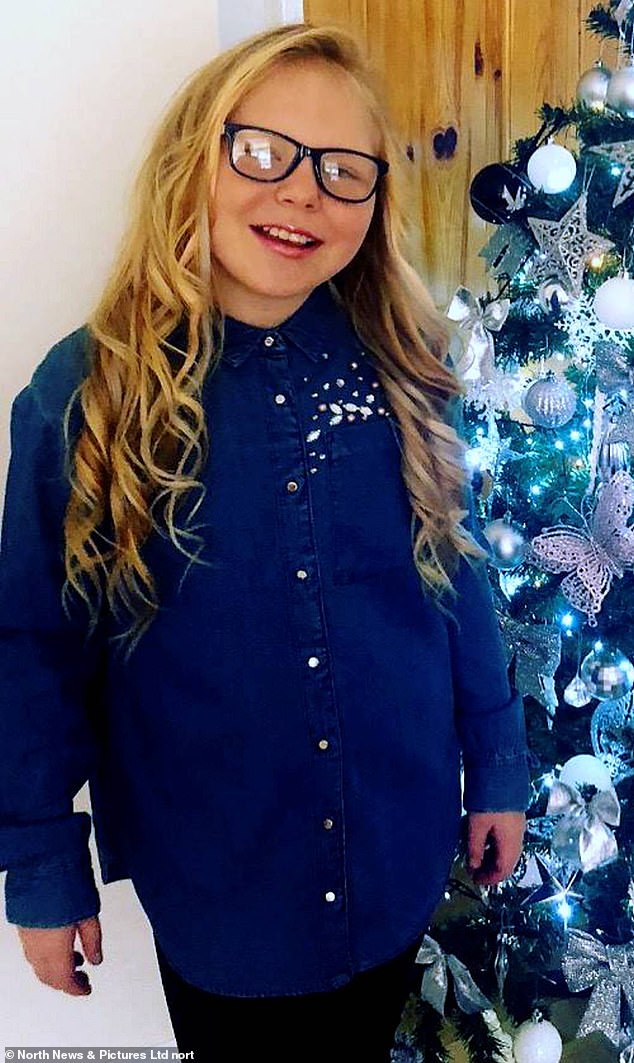 Her grandmother Kathryn Cook, 52, a civil servant, said after the hearing: ‘I’m devastated. Bobbie (pictured at Christmas) is healing medically but she’s having nightmares.’

‘You have yourself two children, you have had time to think about this and are remorseful, I accept that.

‘I do take into account your mental health and personal difficulties.’

After the hearing Bobbie’s mother Samantha, a 28-year-old support worker, said: ‘I ran up to Bobbie she was just lying on the floor, people were screaming and crying.

‘There was blood on her face. When she came round in the ambulance she was screaming. She kept saying, ‘Mummy, mummy, mummy’, it was horrific.

‘We wanted a prison sentence. I wanted her to learn her lesson. We were devastated by the suspended sentence.

‘She has never showed any remorse. She is not human. If you run a child over you stop. It isn’t normal behaviour.’

‘She’s started counselling and a couple of times she actually froze when she’s tried to cross the road.’