A mother has claimed she and her children suffered from stomach pains after going for a paddle at the seaside and encountering sewage.

Biologist Emma Oldham, 33, and her husband took their three children on a camping holiday in Lincolnshire and decided to spend one of the days at the beach in Huttoft, East Lindsey.

She said she noticed something was wrong after her twin three-year-olds and five-year-old ran into the sea.

‘As a conservation biologist, I know why the sea can be muddy sometimes. But with there being heavy rains the night before, I was trying to process what was going on,’ she said.

Despite being only ankle-deep in the water, Ms Oldham said she smelt an overwhelming smell of human waste.

‘The water was filled with these grainy bits and they were sticking to my skin, at that point my daughter came up to me and said “there’s brown everywhere”,’ she added.

The mother posted a video on Twitter purporting to show the sewage washing up on the beach. She was heard saying ‘it literally stinks of poo’.

However, local water firm Anglian Water and the Environment Agency said no sewage was found in the water or on the beaches and instead said Ms Oldham’s video and pictures showed sea algae.

Anglian Water said the algae is ‘a natural phenomenon, completely unrelated to sewage’, whilst the Environment Agency added that it is ‘easy to mistake’ it for sewage because both have an ‘unpleasant smell’. 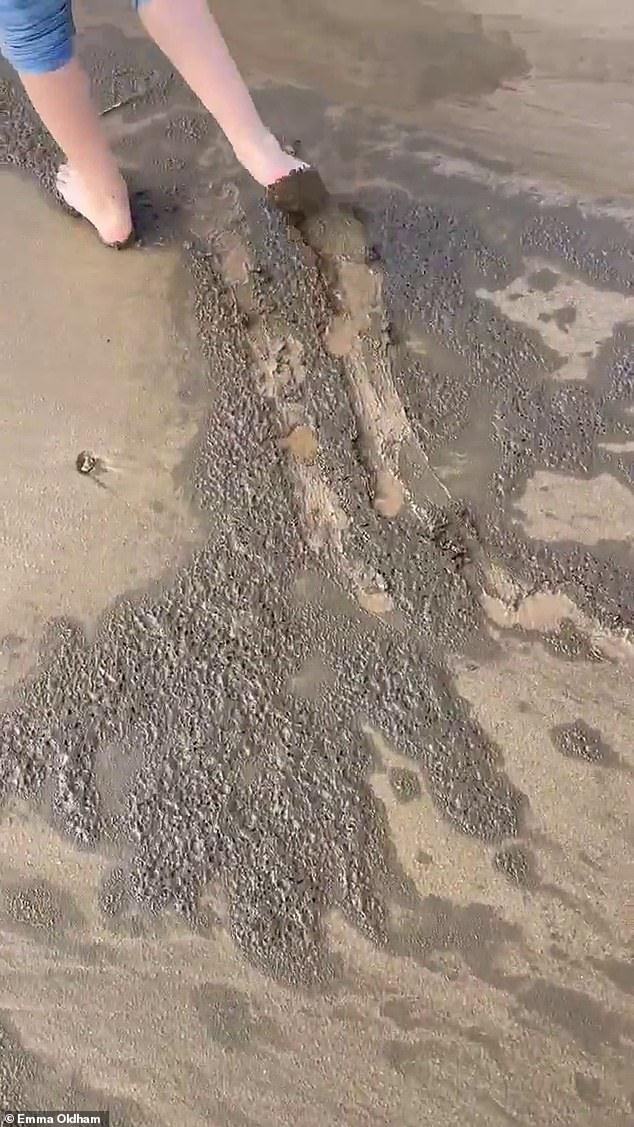 A mother has claimed she and her children suffered from stomach pains after going for a paddle at the seaside – but the waves were full of sewage. Emma Oldham, 33, and her husband took their three children on a camping holiday in Lincolnshire and decided to spend one of the days at the beach in Huttoft, East Lindsey. Above: Ms Oldham’s video allegedly showing sewage 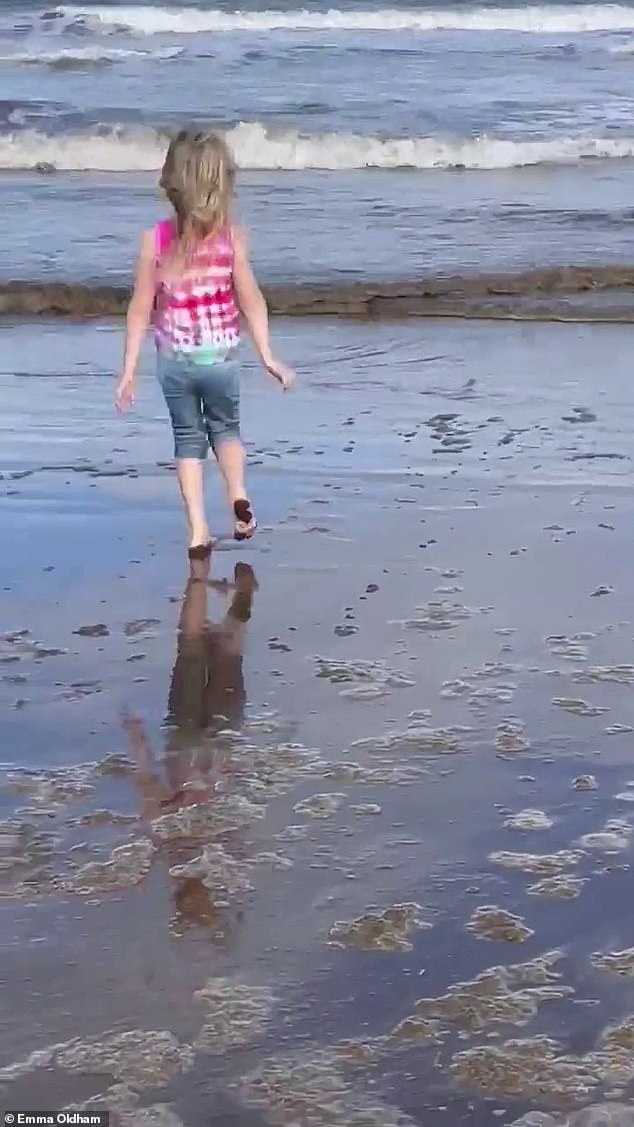 Mrs. Oldham had several good memories of the tourist spot because she’s been going there for most of her life and even decided to bring along two other families.

‘I love it as the beach is really lovely and it’s great to take the kids to,’ she said. ‘It’s just a really safe environment and you can park cars right on the beach.’

But after seeing what appeared to be sewage, the family spent just three minutes in the water before rushing to the showers of the nearby campsite they were staying at.

Ms Oldham said she suffered from chronic stomach pains for days afterwards and was forced to miss work, while her twins also had be off school due to feeling unwell.

‘After looking back on that video, I realised I’m not in a rush to go back to the sea, which is heartbreaking,’ she said,.

‘I’m really disappointed as I know there’s been a huge campaign against sewage in the water, it’s such a detriment to local tourism as well as the local wildlife.

Kirsty Nizinkiewicz, 33, another mother who took her children to the beach, said: ‘Over the weekend, I went on a final holiday of the year with some friends, all of whom have young children.

‘So it was natural for us to want to go to the beach on our last day and enjoy jumping in the waves as so many children love to do. 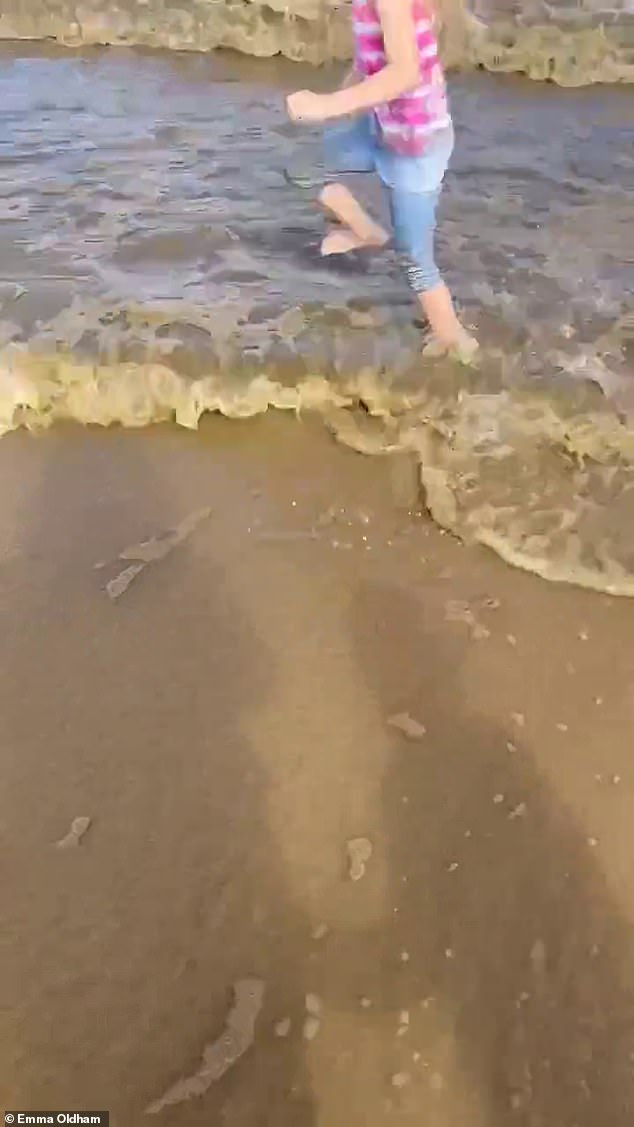 Despite being only ankle deep in the water, Ms Oldham said she smelt an overwhelming smell of human waste

‘I have never seen sea water looking so brown and smelly and hate to think what sort of impact this is having on the wildlife local to the area.’

Anglian Water said no sewage was found in the water or on the beaches after an inspection.

How can you tell whether it’s sea algae or sewage?

Sea algae is a microscopic plant that forms the base of the food chain for marine life.

There are several different types of algae with only a few being toxic.

The most common type of algae in British waters is called Phaeocystis which can end up looking like ‘frog spawn’ or be mistaken for oil drops.

When the algae die, it breaks down and sometimes creates a light brown-coloured foam which can be mistaken for sewage.

It also has a harsh odour which can smell like rotten eggs or gone off vegetables.

The advice published by South West Water has said there are a few ways that people can tell the difference between decaying algae and sewage.

Algae blooms generally appear between April and August so foam from the decaying plant is expected between those months.

Sewage overflows, caused by storms, usually create a grey discolouration of water and often have an identifiable source.

Sewage does not usually cause foaming, however, foam can be created if washing powder or detergent has been leaked from pipes.

A spokesperson said: ‘We have thoroughly inspected the area, both at Huttoft and the surrounding beaches. There is no sewage in the water or on the beaches.

‘The picture in her post on social media is of sea algae, which is a natural phenomenon, completely unrelated to sewage.’

The Environment Agency has echoed Anglian Water’s comment, saying: ‘We have not been notified of any pollution incidents at Huttoft beach over the weekend.

‘The Environment Agency assesses all reports received, and anyone wishing to report suspected pollution should phone the 24-hour incident hotline 0800 807060.

‘The Environment Agency receives many reports of suspected sewage pollution every year, at coastal waters in particular, that are in fact the breakdown of algal blooms.

‘It is easy to mistake algae for sewage, particularly as both have an unpleasant smell. If people notice brown foam on the water’s surface or on the beach it is more likely to be the result of an algal bloom breaking down.’

Last week, water companies were given a two-week deadline by government to outline how they will be preventing sewage from being dumped into open water – as Labour called for ‘tougher sanctions’.

New Environment Secretary Ranil Jayawardena asked for water company chiefs to set out ‘significant improvements’ to the problem in the next fortnight.

His demands came as he faced calls from Labour for ‘tougher sanctions’ – including prison sentences – for water bosses responsible for pumping sewage into the UK’s rivers and beaches.

Mr Jayawardena told the Commons: ‘The volume of sewage spewed out by water companies is completely unacceptable and the public have rightly shown their outrage.

‘Yesterday, in my first day in office, I told water chief executives that it is not good enough and I have instructed them to write to me formally by September 21 with a plan on how they are going to make significant improvements.’

It comes after it was revealed last month that water companies have spent more than nine million hours pumping raw sewage into Britain’s seas and rivers since 2016. 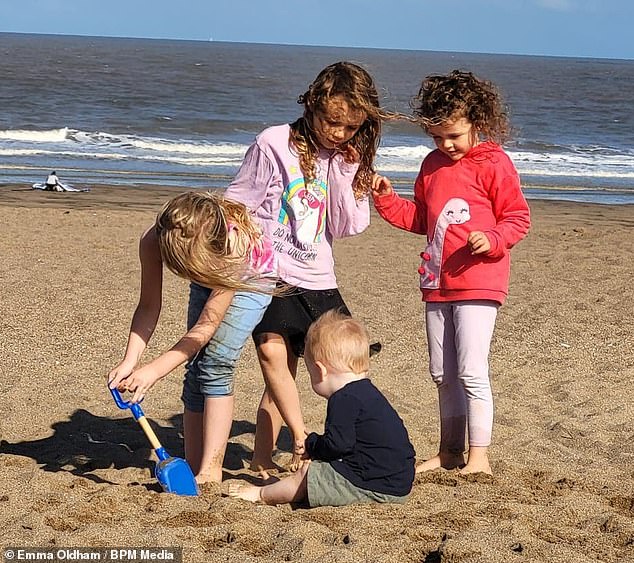 Ms Oldham’s three children are seen with another child on the beach in Huttoft, Lincolnshire

The Labour Party, which obtained the data under Freedom of Information laws, warned that the full scale of pollution could be much worse.

It also shows that there has been a 2,553 per cent increase in the number of monitored discharge hours between 2016 and 2021, with the party arguing that the situation is ‘drastically worsening’ under the Conservatives.