A ‘struggling’ mother-of-five was moved to tears after a kind-hearted stranger left free meals on her doorstep for her children.

Emma Frost from Blacon, Cheshire, was not expecting any deliveries, so it came as quite a shock when her eldest child found two large bags of shopping and five children’s lunch bags sitting on the step.

A note had been left alongside the shopping, with the words ‘a gift from our family to yours’ written on it.

The letter also explained that the free meals were left after Emma’s name was put forward to a person doing food drops in the area. 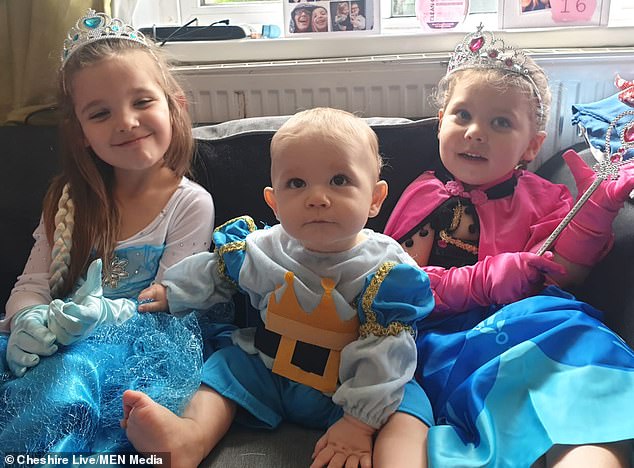 Emma Frost, from Blacon, Cheshire, was moved to tears after two large bags of shopping and five free meals for her children were left on her doorstep (pictured: three of Emma’s children) 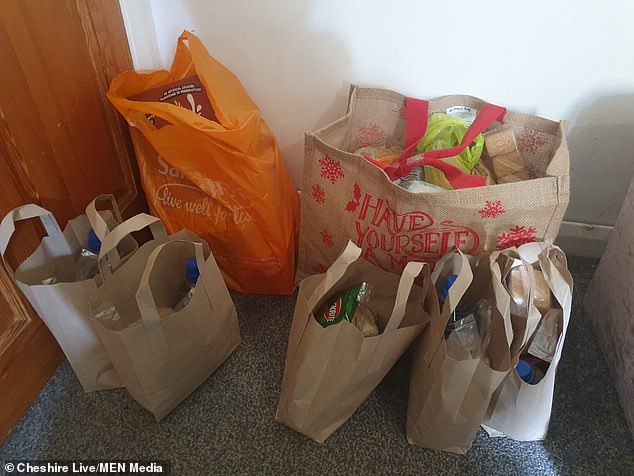 The shopping, above, was found by Emma’s eldest child. It comes after a Labour motion to extend a scheme providing free school meals for children in half term was rejected by MPs

Emma said: ‘My eldest went to the door as we were not expecting anyone and found the bags of shopping and five children’s lunch bags.

‘When she came in, she told me that someone had left the shopping with a note. When I read the note I teared up. I was shocked. It was totally unexpected.’

The heartwarming note read: ‘Hi Emma, I’m doing food drops in the community, and someone has put your name forward to receive one. I’m also doing kids packed lunches Mon-Fri.

‘If you don’t want to receive the kids lunches, just send me a message. Otherwise I’ll drop them between 10:30 and 12pm.

‘No need to come to the door, I will knock, drop and leave. A gift from our family to yours.’

The act of kindness comes after a Labour motion to extend a scheme providing free school meals for children during half term was rejected by MPs last week by 322 votes to 261 – a majority of 61.

Emma said: ‘I think the Government have made the wrong decision as there are more families in a worse situation than we are, and they could really do with the help.

‘This will be amazing support to us this week as we are self-isolating due to my partners’ brother having a positive case of coronavirus.’ 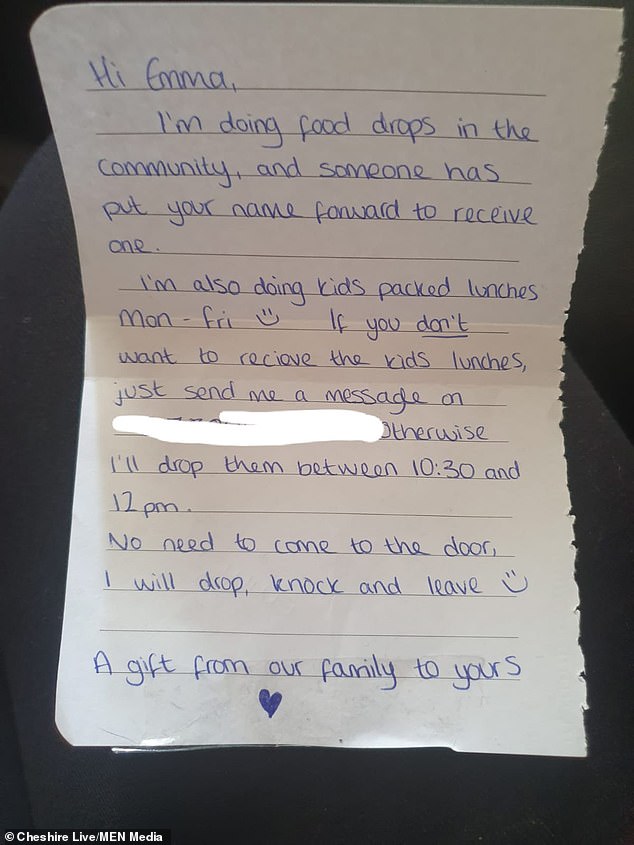 A touching note, pictured above, was left alongside the shopping, reading: ‘Hi Emma, I’m doing food drops in the community, and someone has put your name forward to receive one’

The unexpected surprise prompted mixed reactions from her children, aged between 11 months and 16-years-old.

She said: ‘My 16-year-old was shocked and my five-year-old and four-year-old were both very excited. My 11-month old just wanted the biscuits he had spotted at the top of the bag.’

Emma wanted to thank the stranger for ‘brightening her day up.’

She said: ‘I would like to say thank you from the bottom of my heart. On a day where I was struggling mentally, you brightened it up. It is very much appreciated and it shows there are still some people sharing their humanity around.’