Mother shames son, 14, by forcing him to spend a day picking up litter before uploading the photos onto social media after he was exposed in a ‘crimewatch’ chat group for throwing food on the ground outside a cafe

A mother has shamed her 14-year-old son by forcing him to spend a day picking up litter after he was exposed in a ‘crimewatch’ Facebook group for chucking food outside a cafe.

Stacey Robertson, from the Wirral, spotted Louie’s photo in a post accusing him and other children of littering and ‘giving a load of mouth’.

The post, shared with Crimewatch Wirral’s 65,000 members, accused Louie and his friends of ‘throwing food and rubbish all over the floor’ outside a café in West Kirby.

Mrs Robertson, rather than come to her son’s defence, told the group she would have Louie spend a day picking up rubbish and later proved it with photos. 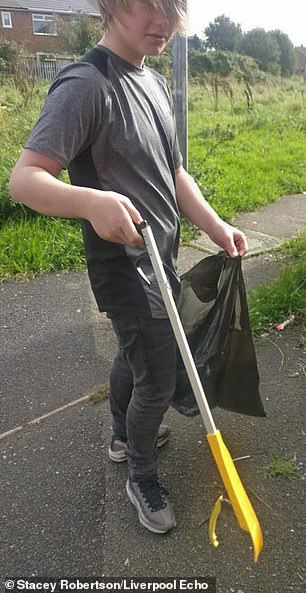 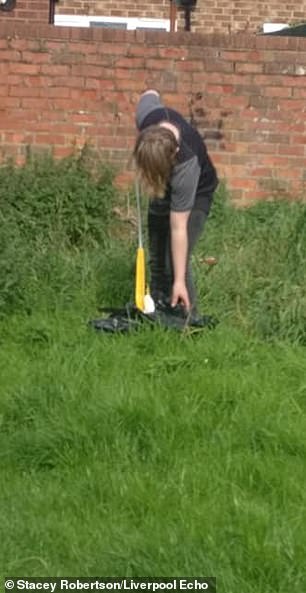 Mrs Robertson, rather than come to her son’s defence, told the group she would have Louie spend a day picking up rubbish and later proved it with photos (left and right) 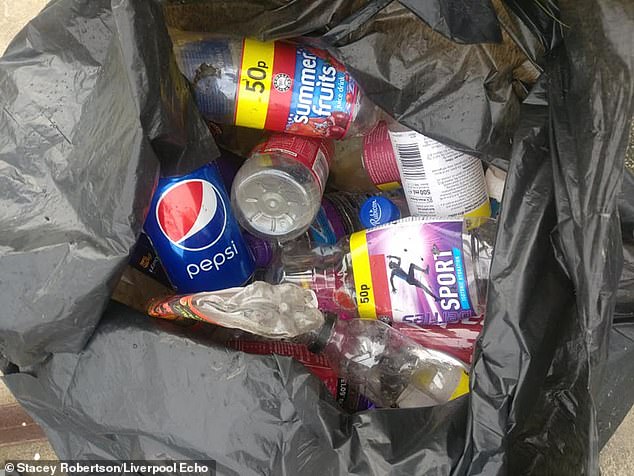 Posting on Facebook, Mrs Robertson wrote: ‘The one in pink is my son Louie – he is 14 and was not brought up like this. He is off school tomorrow and will be doing a day’s litter picking come rain or shine.

‘I will upload pictures of him and he will be apologising to anyone he has upset and if there is a member of staff from the café who wants to message me and arrange a Saturday or Sunday were we can come in.

‘Louie can do a day cleaning washing dishes brushing the floor whatever is needed – I will stay and fully supervise him.

‘Every time I look at this picture I cringe because this is not the lad I brought up.’

True to her word, Mrs Robertson took her teenage son out for a day of litter picking today around their local community centre in Leasowe.

Speaking to the Liverpool Echo, Louie wanted to make clear that he felt the bad behaviour he was accused of was taken out of context – and that it wasn’t exactly how it looked. 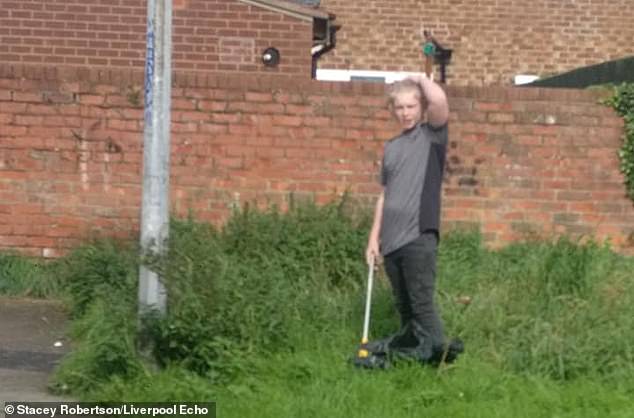 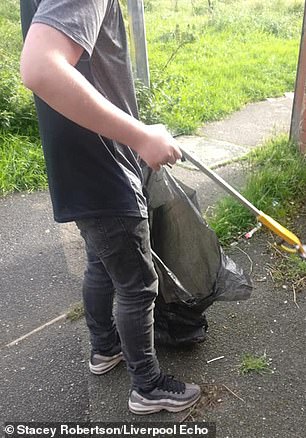 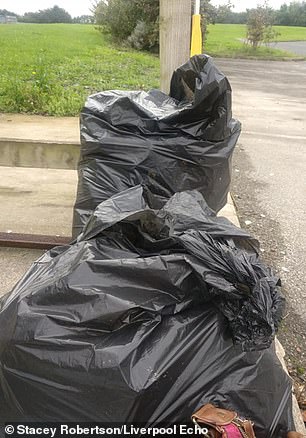 Louie said he and his friends had two cones of chips and he was dared to drink the vinegar from the bottom.

Mrs Robertson, 39, said: ‘Him being a div (sic) he did and his reaction was to throw the cone and the chips on the floor- he then told his friends he was going to the Post Office to buy a drink because all he could taste for vinegar, which is why he wasn’t in the second picture.’

Louie claims the lady who shared the pictures and post in Crimewatch Wirral only spoke to another boy while he was in the chip shop and that he was not rude to her.

Regardless of whether he felt the post shaming him was legitimate or not, Louie still spent his day off school picking up rubbish on his mum’s orders.