This is the moment two mother-in-laws hilariously misfire their smoke flares at a gender reveal event.

Austin Schmidt, 25, and Katie Howe, 24, were hosting a party at their home in Wisconsin, to announce the gender of their baby.

Katie’s mother, Jessie, and Austin’s mother, Shannon, were given small smoke cannons to set off at the crucial moment. 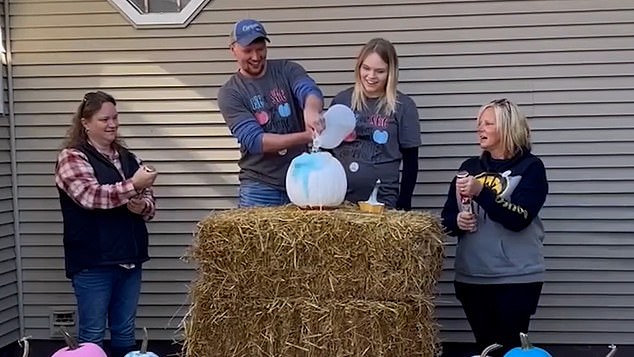 Austin Schmidt, 25, and Katie Howe, 24, were hosting a party at their home in Wisconsin, to announce the gender of their baby 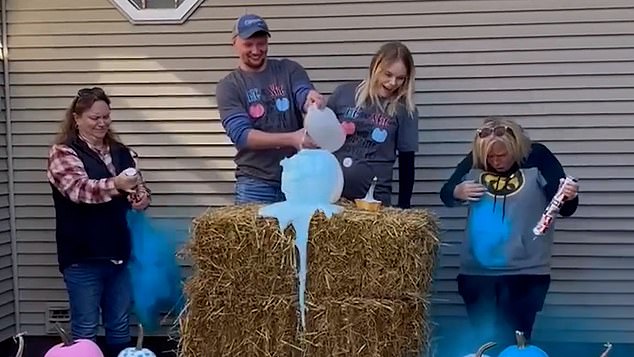 Mother-in-laws Jessie and Shannon activated their flares, not realising they were holding them upside down in the gender reveal mishap

The father Austin was certainly surprised by the reveal, but perhaps not for the reasons you might expect.

As Austin and Katie poured a liquid to reveal the colour blue erupting from a pumpkin, indicating they were having a boy, Jessie and Shannon activated their flares, not realising they were holding them upside down.

Instead of projecting the blue smoke into the air as intended, both grandparents-to-be fired the flare into their stomachs, staining their tops in the process.

Gender reveal parties can be a fun way to announce exciting news to loved ones, but as the trend becomes ever more popular, some of the outlandish celebrations have caused one or two mishaps.

In September 2020, a dad-to-be accidentally set off a gender reveal flare straight into his crotch – leaving one friend to joke ‘no need for that vasectomy’.

Kristen Cressotti, 36, and husband Tom, 43, hosted the gender reveal party at their home in East Longmeadow, Massachusetts, with an unexpectedly painful outcome.

The cannons were facing the wrong way, leaving Tom’s groin to take the full brunt of the blast, which was meant to shoot powder 30 feet away.