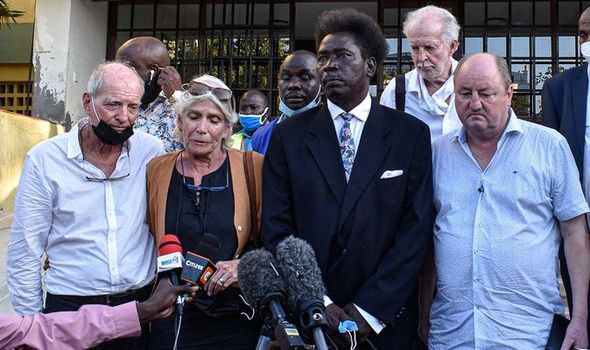 Alexander Monson was tortured and had cannabis planted on him after his death in 2012, a court heard. His mother Hilary said after the men were sentenced to up to 15 years each in prison: “I am grateful that after this long wait, justice has been done for my late son.

“I just feel like, after waiting for 10 years, the sentence given to the accused persons isn’t enough for a mother who lost her child in such a brutal manner. But this should still send strong messages to the Kenyan police force to respect human life.” Kenyan security forces have often been accused of brutality.

Human rights groups blame them for hundreds of killings in recent years, most of which have gone uninvestigated.

Judge Eric Ogola told a court in the East African country’s second city of Mombasa yesterday that Mr Monson was “brutally tortured” after being arrested for allegedly smoking cannabis in the beach resort of Diani.

The four officers hung their heads as they were convicted of manslaughter, watched by Mr Monson’s mother, father and other relatives. Mr Monson, 28, was the son of Lord Nicholas Monson and heir to a family estate in Lincolnshire. He moved to Kenya in 2008.

After he was arrested, a friend found him unconscious under a desk at the police station.

The officers agreed to take him to hospital, where he was handcuffed to a bed, but doctors failed to spot a large wound on the back of his skull.

Police said a drugs overdose killed him but a 2018 inquest found he had died from the head injury. He was in good health before his arrest. A toxicology report noted there were no drugs in his body.

Judge Ogola said: “The drugs were planted on the deceased after his death as a coverup. The death of the deceased was caused through unlawful omission on the part of the accused persons for failing to seek medical care.”

Naftali Chege was given 15 years in jail, five of them suspended; Charles Wangombe Munyiri was sentenced to 12 years, six suspended; Baraka Buluma received nine years, five suspended, and John Pamba was given 12 years with six suspended.

Judge Ogola said the four knew who had tortured Mr Monson but “the code of silence in the police force” had kept their names secret.