MPs would only face being banned from the Parliamentary estate if they are CHARGED with sexual or violent offences, under new proposals

MPs would only face the possibility of being banned from the Parliamentary estate if they are charged with violent or sexual offences, under new proposals.

A consultation launched by the ruling Commons Commission has rejected the idea of a lower threshold – citing the ‘constitutional’ importance of politicians being able to work.

The cross-party body highlighted the length of time it can take for someone who is arrested to be charged, and the ‘potential for vexatious complaints’.

It also suggested that MPs who are charged could still be allowed to continue working at Westminster with decisions taken on a ‘case-by-case basis, informed by a risk assessment’.

The commission is seeking views on whether anyone barred should get a proxy vote, but the plan would mean they are still able to ‘take part in any virtual activity’.

There have been long-running questions about how to treat MPs who are accused of violent or sexual offences. Because politicians are office-holders they are not technically employees of the Commons.

Several cases recently have seen individuals voluntarily commit to staying away from Parliament, but unions have insisted there should be ‘compulsory exclusion’ for MPs under investigation for unacceptable behaviour.

The consultation notes that such promises have ‘not always been honoured’. 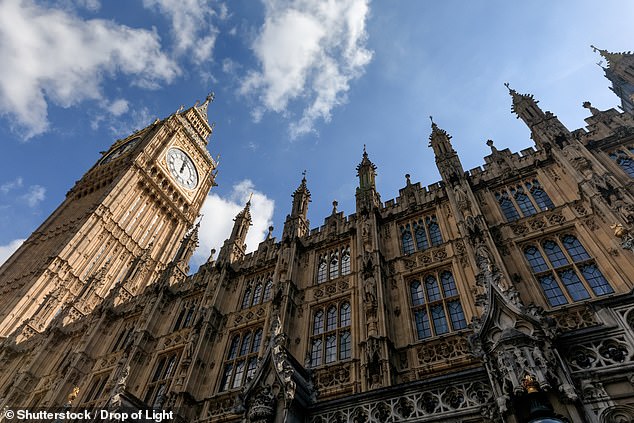 MPs would only face the possibility of being banned from the Parliamentary estate if they are charged with violent or sexual offences, under new proposals 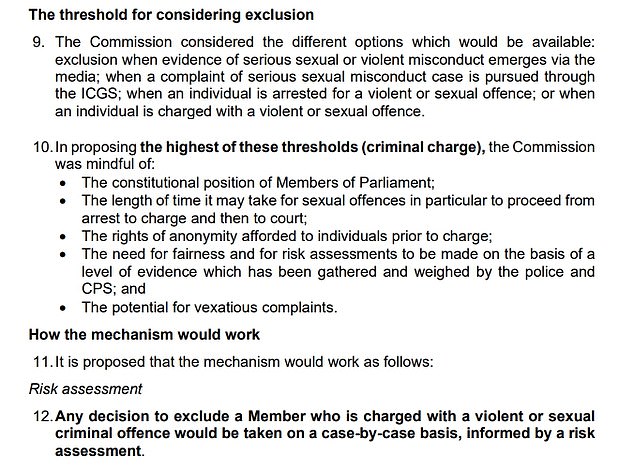 The document says: ‘The Commission considered the different options which would be available: exclusion when evidence of serious sexual or violent misconduct emerges via the media; when a complaint of serious sexual misconduct case is pursued through the ICGS; when an individual is arrested for a violent or sexual offence; or when an individual is charged with a violent or sexual offence.’

The consultation listed a series of factors to justify the Commission proposing the ‘highest of these thresholds’ – a criminal charge.

They were the ‘constitutional position of Members of Parliament’, the ‘length of time it may take for sexual offences in particular to proceed from arrest to charge and then to court’, the ‘rights of anonymity afforded to individuals prior to charge’, the ‘need for fairness and for risk assessments to be made on the basis of a level of evidence which has been gathered and weighed by the police and CPS’, and the ‘potential for vexatious complaints’.

The change to Parliament’s rules would need to be approved by MPs and peers but would not require legislation.

When the police inform the House authorities of a relevant charge it would trigger a risk assessment.

‘Any decision to exclude a Member who is charged with a violent or sexual criminal offence would be taken on a case-by-case basis, informed by a risk assessment, the document said.

The assessment would be carried out by a small group of senior officials, and then passed to an ‘adjudication panel’. Speaker Lindsay Hoyle is suggesting that would be made up of two of his deputies and a non-executive member of the Commission.

Any MP banned would also be prevented from going on trips with Parliamentary committees – but the Commons cannot stop them from using constituency offices.

The Commission asked for views on whether excluded MPs should ‘be given a proxy vote, to enable their constituents to be represented in the House in this way’.

A House of Commons spokesman said: ‘The Commission has agreed to launch a consultation on excluding Members charged with violent or sexual offences from the Parliamentary estate until any such cases are concluded.

‘Ultimately it will be for the whole House to decide on any such power.’