One of Australia’s most respected anti-corruption lawyers says Attorney-General Christian Porter should not have responsibility for establishing a Commonwealth Integrity Commission while he is facing an unresolved rape allegation.

Former Queensland Criminal Justice Commission director Mark Le Grand, QC, said the flaws inherent in the proposed Commonwealth anti-corruption body, particularly the special protections it offers politicians, created a conflict for Mr Porter, who is challenging historical rape allegations against him in a defamation proceeding against the ABC. 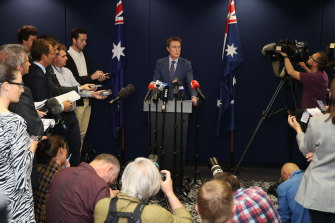 Attorney-General Christian Porter has been on leave since identifying himself three weeks ago as the cabinet minister at the centre of historical rape allegations which he denies. Credit:Trevor Collens

“Isn’t it a matter of public perception, public faith in the process that the person who is sponsoring this legislation through the Parliament is beyond reproach and doesn’t have an interest in the provisions of the legislation?” Mr Le Grand said.

“A person who is the subject of serious allegations which are the subject of litigation in the Federal Court muddies the waters and brings into question whether he is truly an independent agent in taking this legislation through parliament.

A 347-page exposure draft of legislation to establish a Commonwealth Integrity Commission, intended to be the nation’s peak anti-corruption agency was released last November and has been savaged by integrity experts and legal groups for the shield it provides to MPs, their advisers and public servants.

‘I have rarely in the 30 years I have been researching anti-corruption commissions come across one that is deficient is so many areas.’

Whereas Australian Federal Police and border officials could be investigated for corruption of any kind on the basis of a whistleblower complaint, the Integrity Commissioner would not be able to launch an “own motion” investigation into a serving MP or public servant.

Instead, the commissioner would need to be armed with a referral from another specified agency, including the Attorney-General, and evidence to “reasonably suspect” a crime within a prescribed range of offences had been committed.

Mr Porter strongly denies the rape allegations against him, which date back 30 years to when he was a 17-year-old high school debater. The woman who made the claim against him died last year without providing a statement to police. 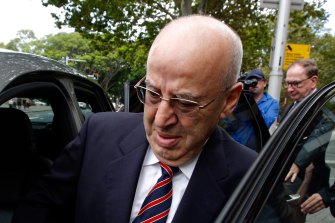 Mr Le Grand said the inability under Mr Porter’s proposed law for the Integrity Commissioner to investigate a parliamentarian on the basis of a whistleblower complaint or tip-off means the body, unlike the NSW ICAC, would have been unable to investigate corrupt Labor powerbroker Eddie Obeid.

Stephen Charles QC, a former judge of the Victorian of Appeal and director of The Centre for Public Integrity, described the proposed regime as a “parliamentarians’ protection racket”.

Dr Colleen Lewis, an honorary professor of Australian studies at ANU, said she was unable to support most key aspects of the exposure bill.

“I have rarely in the 30 years I have been researching anti-corruption commissions come across one that is deficient is so many areas as the proposed model,” she wrote in a submission to the Attorney-General’s Department.

The federal government promised in 2018 to introduce a national anti-corruption agency within two years. Assistant Minister to the Attorney-General Amanda Stoker told Senate estimates on Tuesday that more than 300 submissions about the proposed commission had been received during a three-month consultation period over the summer.

“I think it’s fair to say having gone through the consultation process recently, we’ve identified some ways in which it can be improved,” Senator Stoker said. “And we are quite sincere in our desire to reflect that feedback in the next version.”

Most of the published submissions decry the unequal treatment proposed for law enforcement officers and other public servants including parliamentarians. Provisions that would give the Attorney-General power to refer matters to the commission and determine whether classified and other sensitive information could be provided has also raised the ire of anti-corruption campaigners.

Law Council of Australia president Jacoba Brasch said the exposure draft had “significant shortcomings” and needed to be “substantially revised and amended.” The LCA believes all hearings should be held in camera.

“This may restrict the CIC’s intended function to detect corrupt conduct by parliamentarians,” Dr Brasch said.

A group of retired Supreme and High Court judges known as the National Integrity Committee said the proposed commission fell “disastrously short” of what was required.

“Especially in relation to the examination of corruption in the public sector, this model will rightly be seen by the community as a sham and as a deliberate political diversion designed to shield the public sector, and in particular politicians and their staff, from proper scrutiny and accountability,″⁣ their submission read.

The retired judges said there was no basis for arguing that an anti-corruption body needed lesser powers to deal with public servants than police. “If anything, the argument runs the other way.”

Senator Stoker, when asked in the estimates hearing whether Mr Porter would keep responsibility for the legislation, said that would depend on Solicitor General advice currently before Prime Minister.

Shadow Attorney-General Mark Dreyfus questioned how Mr Porter could have carriage of the legislation.