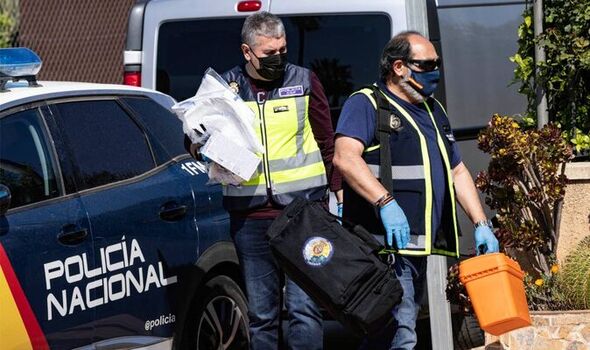 A stunned neighbour, shocked at the killing of such a frail elderly woman, said: “I can’t imagine what happened.

“You could knock her over with a feather.”

A Spanish woman, 46, and her 16-year-old boy were arrested by detectives after witnesses contacted them.

A plumber was said to have alerted police on Wednesday after he was called to her house for an emergency repair.

He said he saw two people leave the property and speed away as he arrived.

Detectives are said to have ruled out fears the shooting may have taken place in a bungled burglary and believe the victim and the suspects knew each other.

They are investigating a theory that the female suspect, who is said to have practised target shooting, blasted the widow before asking her son to move the body and help her dispose of evidence.

Police arrested the pair on Thursday after discovering her car had been gutted in a fire hours after the killing.

It was said the 81-year-old had lived in the property near Elche for 20 years, having retired from London with her husband John, who later died.

Alan Benson, 70, paid tribute to his neighbour. He said: “We have no idea what happened. It’s so tragic. She was incredibly thin. You could knock her over with a feather. I just don’t understand why they did it.”

Detectives have until tomorrow to hold the pair before handing them over to a judge for further questioning.