Rome: Thousands of refugees and migrants left homeless on the Greek island of Lesbos by huge fires that destroyed their camp will not be evacuated from the island because the blazes were started deliberately, the government said yesterday.

Greek officials and senior firefighters claim the fires started in several places at the same time and were deliberately lit by migrants protesting against the implementation of quarantine measures after around 35 of them tested positive for COVID-19. 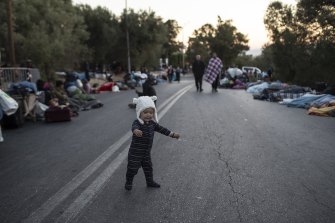 A boy tries to stand as migrants sleep on the road near the Moria refugee camp on the island of Lesbos, Greece, on Thursday.Credit:AP

Government spokesman Stelios Petsas said the asylum seekers "set the fires" "because they considered that if they torch Moria, they will indiscriminately leave the island. We tell them they did not understand. They will not leave because of the fire. Some people do not respect the country that is hosting them".

The announcement appeared to dash the hopes of charities and NGOs who are calling for the closure of the devastated Moria camp and the immediate transfer of all 12,500 asylum seekers to the Greek mainland and eventual settlement in EU countries.

Humanitarian organisations say that with the camp burnt to the ground, and islanders fiercely opposed to the building of a new facility, the only option is to move the migrants and refugees off Lesbos. 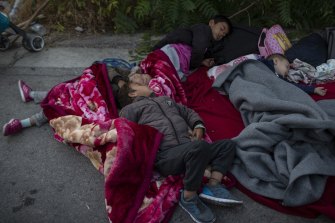 Migrants sleep on the road in Lesbos, Greece, after the Moria refugee camp was destroyed by fire.Credit:AP

Medecins Sans Frontieres called on the Greek authorities to "evacuate all these people to a safe place on the mainland or to other European countries." Refugees International said the Greek government should transfer people to the mainland, after which "EU member states must step up to relocate the asylum seekers".

After big blazes on Tuesday and Wednesday nights destroyed about 90 per cent of the camp, a third fire broke out on Thursday, burning what was left of the sprawling facility. Some migrants blamed authorities for setting the fires. Neither side offered proof. 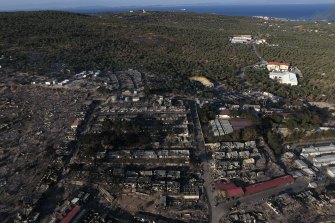 The burnt Moria refugee camp is seen from above. A third fire burnt what was left from the camp on Thursday.Credit:AP

But Petsas said no other migrants would be allowed to leave apart from the 400 unaccompanied children and teenagers who have been flown to Thessaloniki in northern Greece.

France and Germany put forward a proposal for the minors to be shared around EU member states. "We want to show solidarity with Greece that lives up to European values," said French President Emmanuel Macron. But so far there appears to be little appetite among EU member states to take in the newly homeless migrants.

The Netherlands and Austria have ruled out taking any of those affected, and their plight is threatening to create a new divide within the bloc.

Thousands were expected to sleep out in the open air for a third night, lying on the bare ground or pitching tents they had managed to salvage.

The government said it would take days to find them new accommodation.

"Our home burnt, my shoes burnt, we don't have food, no water," Valencia, an eight-year-old Congolese girl, told reporters.

Both she and her mother Natzy Malala, 30, who has a newborn infant, slept on the side of the road. "There is no food, no milk for the baby," Malala said.

Chancellor Angela Merkel was facing a split within her government even as she sought to negotiate an EU solution.