Singer Naomi Judd died by suicide on Saturday just a day before the 76-year-old was set to be inducted into the Country Music Hall of Fame, reports say.

Daughters Ashley and Wynonna, who performed with her mother for years as the duo ‘The Judds,’ previously said their mother succumbed to the ‘disease of mental illness.’

In a follow-up statement, Naomi’s husband of 32 years and Ashley’s father Larry Strickland said: ‘Naomi Judd’s family request privacy during this heartbreaking time. No additional information will be released at this time.’

Naomi had written extensively about her struggles with depression, and even referenced suicide in an open letter published in People magazine in 2018.

‘For everyone mourning the death of someone who committed suicide, an inevitable question arises: Why did this happen? Unfortunately, we don’t have very good answers,’ she wrote.

‘We do know that suicidal behavior accompanies many behavioral brain disorders such as schizophrenia, bipolar disorder, and depression. Suicide is actually one of the leading causes of preventable death among these mental illnesses.’

Sources now say the singer took her own life, People reports. ‘The Judds’ scored 14 No. 1 songs in a career that spanned nearly three decades.

On Sunday, her daughters broke down in tears during a ceremony to induct their late mother into the Country Music Hall of Fame as part of The Judds – just 24 hours after her passing. 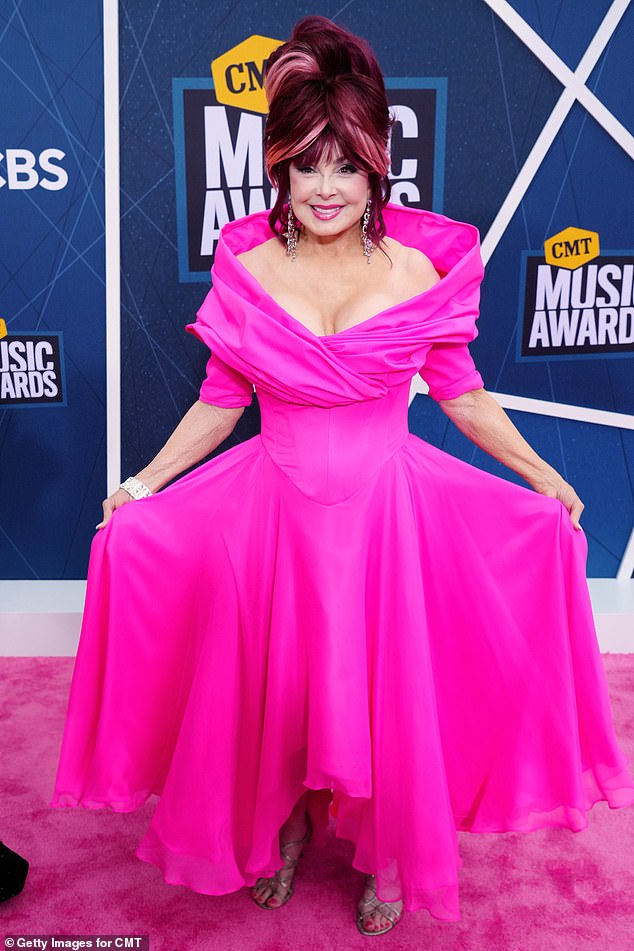 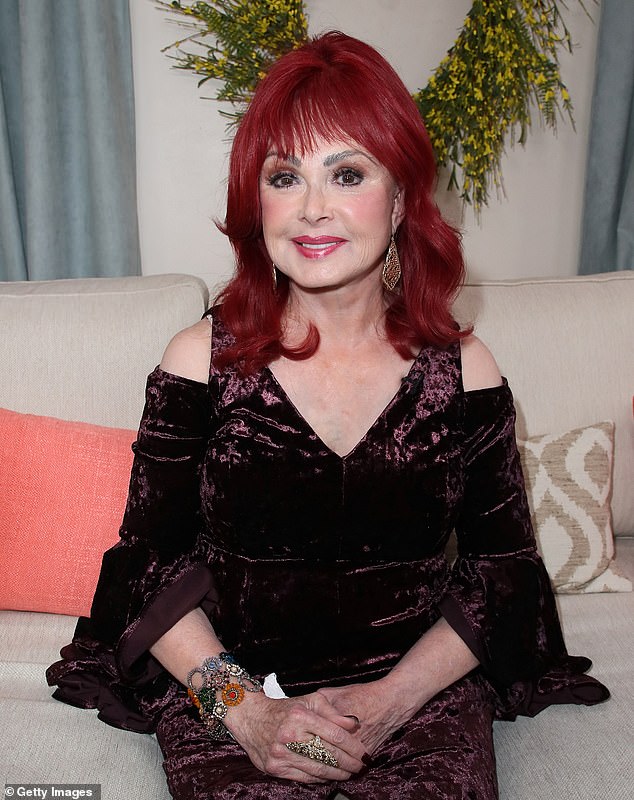 Her death came just one day before she was set to be inducted into the Country Music Hall of Fame. Above, Naomi Judd in March 2018 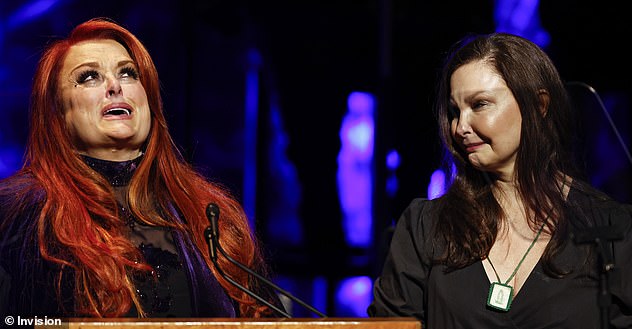 The singer’s daughters Wynonna (left) and Ashley (right) previously said she succumbed to the disease of ‘mental illness. Above, Wynonna looks to the sky holding back tears as sister Ashley Judd watches during the Country Music Hall of Fame ceremony on Sunday 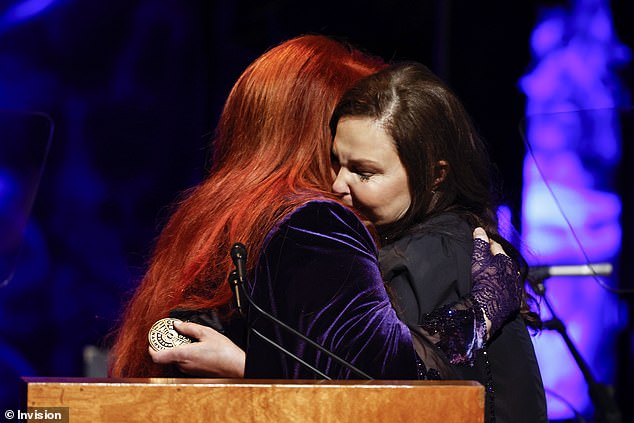 The Judds, the duo consisting of Wynonna and her mother Naomi, were set to be inducted on Sunday. The ceremony went on as planned even after Naomi’s unexpected death

‘My mama loved you so much,’ Ashley said to the crowd gathered. ‘And I’m sorry that she couldn’t hang on until today,’ she said through tears.

In her 2018 essay, Naomi Judd advocated for more research into the nature of suicide.

‘To understand this issue better, we have to bring the study of suicide into mainstream neuroscience and treat the condition like every other brain disorder,’ she wrote.

‘People who commit suicide are experiencing problems with mood, impulse control and aggression, all of which involve discrete circuits in the brain that regulate these aspects of human experience, but we still don’t understand how these circuits go haywire in the brains of suicide victims.’

She described what depression feels like to her in an interview with People magazine while promoting her 2016 book.

‘Nobody can understand it unless you’ve been there,’ she said.

‘Think of your very worst day of your whole life – someone passed away, you lost your job, you found out you were being betrayed, that your child had a rare disease – you can take all of those at once and put them together and that’s what depression feels like.’ 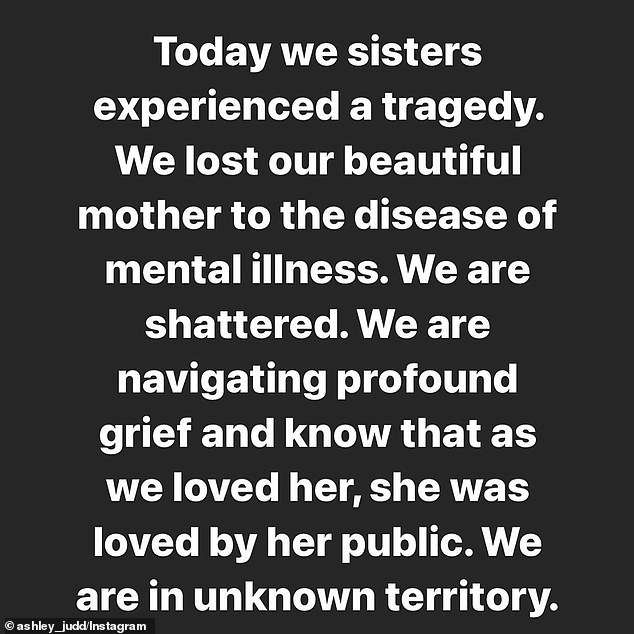 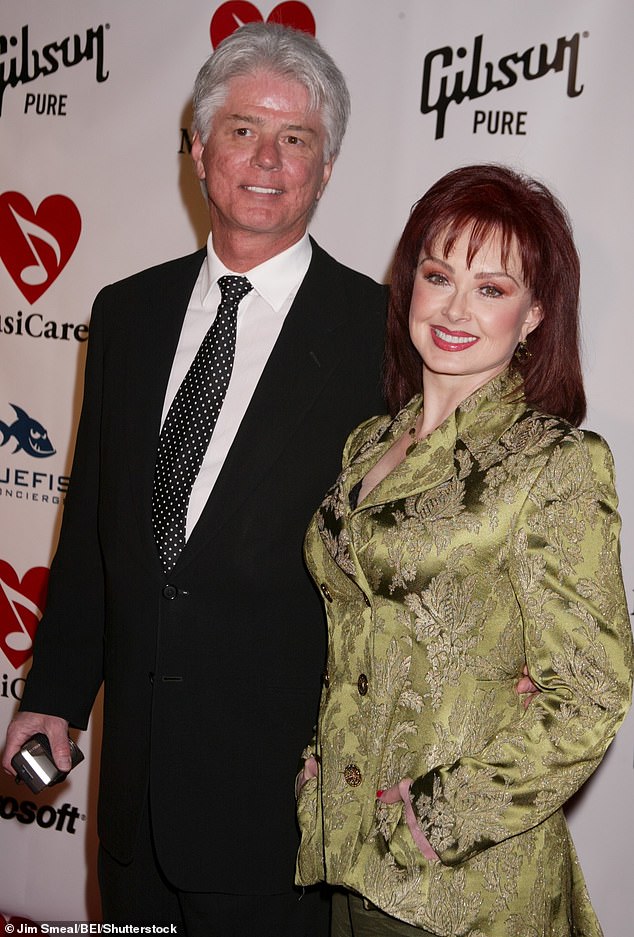 Naomi Judd’s daughters, Wynonna and Ashley, both broke down in tears at the ceremony on Sunday.

The pair cited a bible verse and lamented that Naomi hadn’t lived to receive the honor herself.

‘Your esteem for her and your regard for her really penetrated her heart and it was your affection for her that did keep her going in the last years and please come see Pop,’ Ashley said, referencing her father and Naomi’s husband, Larry Strickland.

Ashley also paid tribute to sister Wynonna, who was also inducted alongside her mother as part of the country music duo ‘The Judds.’

‘While this is so much about The Judds as a duo, I want to take a moment to recognize my sister, a GOAT,’ she said, meaning ‘Greatest of All Time.’

Wynonna Judd talked about the family gathering as they said goodbye to her and she and Ashley Judd recited Psalm 23.

‘Though my heart is broken I will continue to sing,’ Wynonna Judd said.

The daughters kept their sense of humor amid the sadness, as Wynonna said: ‘I didn’t prepare much to say, because I assumed mama would be doing all the talking.’

‘Newspapers don’t get a lot right these days but when they said you were Elvis-like, they got it.’

The Hall of Fame medallion ceremony was held at the CMA Theatre in Nashville, Tennessee on Sunday.

In addition to The Judds, Eddie Bayers, who played on many of the duo’s records, Ray Charles and Pete Drake were also inducted into the Hall of Fame. 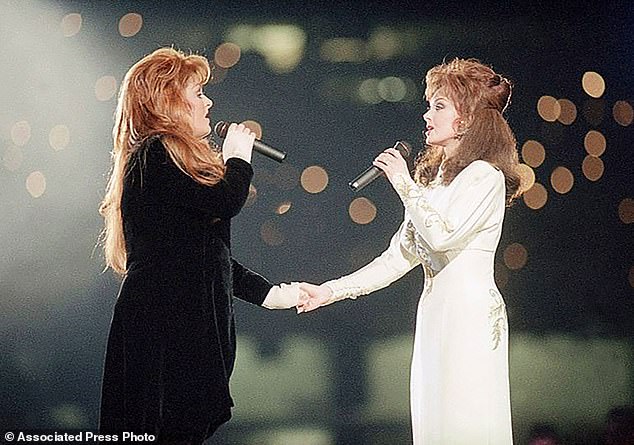 Wynonna Judd, left, and her mother, Naomi Judd, of The Judds, perform during the halftime show at Super Bowl XXVIII in Atlanta on Jan. 30, 1994 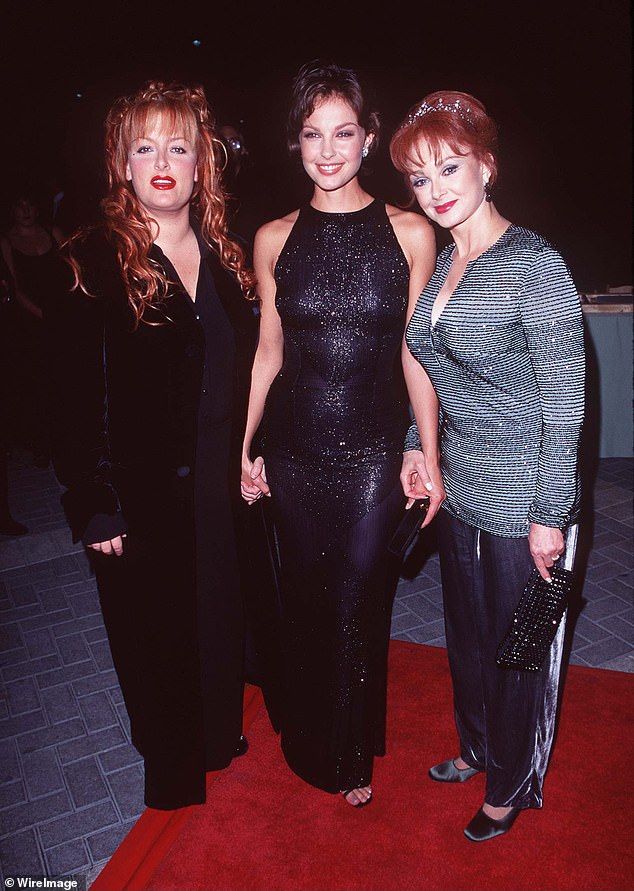 Naomi’s death was confirmed by her daughters, Wynonna Judd and Ashley Judd. Wynonna, Ashley and Naomi Judd (left to right) are pictured at the ‘Kiss The Girls’ Premiere at Paramount Theatre in Hollywood, California in October 1997 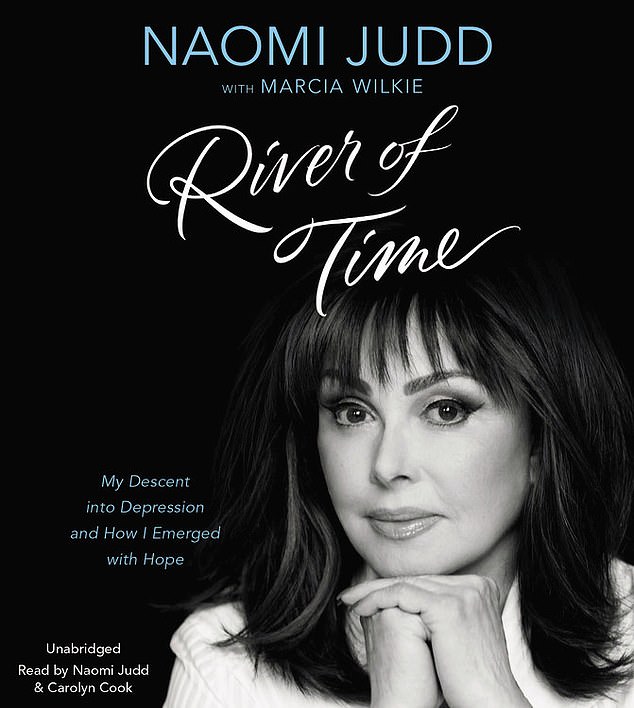 While promoting her book, ‘River of Time,’ Judd said of depression: ‘Nobody can understand it unless you’ve been there’

Public red carpet arrivals ahead of the event were canceled, according to the Associated Press.

She told the Today Show in 2017 that after The Judds stopped touring, she didn’t get off the couch for two years, falling into ‘extreme’ and ‘severe’ depression.

‘[Fans] see me in rhinestones, you know, with glitter in my hair, that really is who I am,’ she said. ‘But then I would come home and not leave the house for three weeks, and not get out of my pajamas, and not practice normal hygiene. It was really bad. 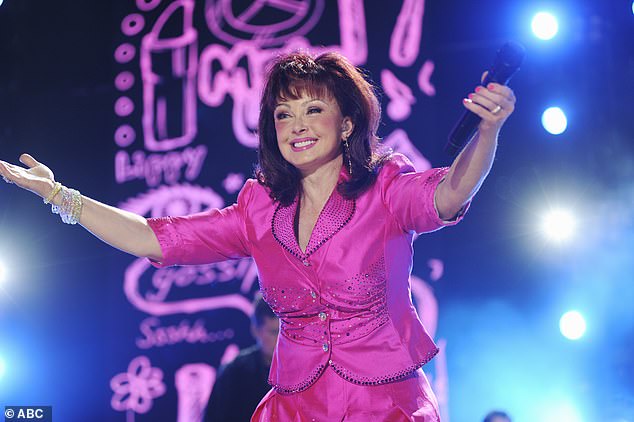 Naomi Judd said she became severely depressed after she stopped touring. ‘When I came off the tour I went into this deep, dark absolutely terrifying hole and I couldn’t get out,’ she said. ‘I spent two years on my couch’

‘When I came off the tour I went into this deep, dark absolutely terrifying hole and I couldn’t get out,’ she added. ‘I spent two years on my couch.’

She said she even scouted out a bridge near her family’s farm to jump from.

‘That’s how bad it can get,’ she said. ‘It’s hard to describe. You go down in this deep, dark hole of depression and you don’t think that there’s another minute.’

She said that one night, her husband and daughter Ashley called 911 and she entered therapy, eventually undergoing ECT (electroshock therapy) to ‘jump start’ the chemicals in her brain.

‘We are shattered. We are navigating profound grief and know that as we loved her, she was loved by her public. We are in unknown territory,’ the statement from the Judd sisters said.

She claimed to have put herself through nursing school to support her daughters before pursuing her Nashville dreams with Wynonna, becoming The Judds.

Born Diana Ellen Judd in Ashland, Kentucky, Naomi was working as a nurse in Nashville, when she and Wynonna started singing together professionally. Their unique harmonies, together with elements of acoustic music, bluegrass and blues, made them stand out in the genre at the time.

‘We had a such a stamp of originality on what we were trying to do,’ Naomi told The AP after it was announced that they would be joining the Country Music Hall of Fame.

In her book ‘River of Time: My Descent into Depression and How I Emerged with Hope’ she writes about struggles a single mother and a survivor of domestic abuse and sexual assault.

At the height of their popularity, Naomi lived through the previously incurable Hepatitis C virus, having been pronounced cured five years after the diagnosis.

The mother-daughter performers scored 14 No. 1 songs in a career that spanned nearly three decades.  After rising to the top of country music, they called it quits in 1991 after doctors diagnosed Naomi with hepatitis.

The duo last performed together at the CMT Music Awards of April 11, singing Love Can Build a Bridge. They were accompanied by a gospel choir.

The Judds had also recently announced a farewell tour, the first by Naomi and Wynonna in more than a decade.

The short, 10-date tour, which was being produced by Sandbox Live and Live Nation, was to start on September 30 in Grand Rapids, Michigan and wrap up October 28 at Nashville’s Bridgestone Arena. 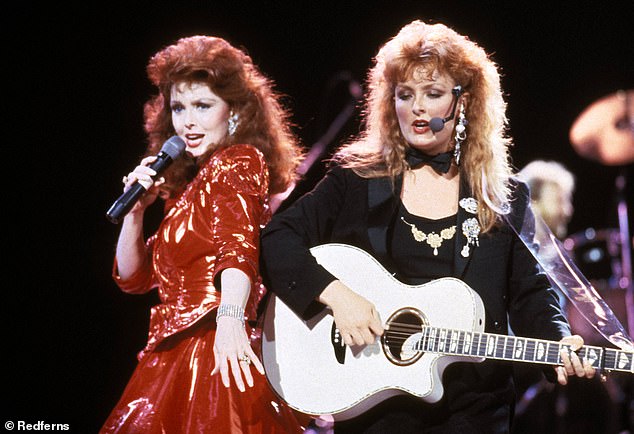 The Judds were to be inducted into the Country Music Hall of Fame on Sunday. The duo is pictured performing in 1988 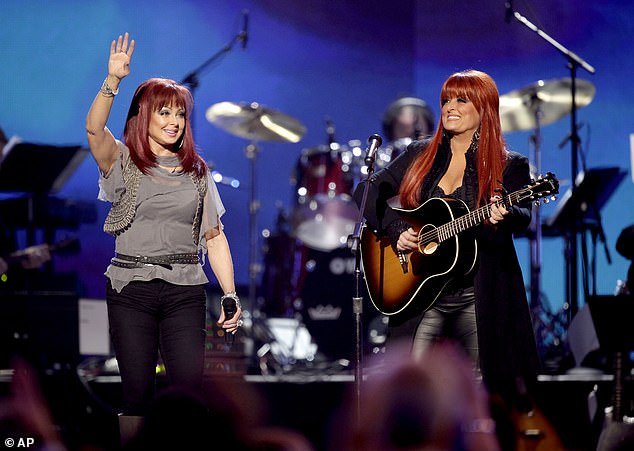 Naomi Judd (left) and Wynonna Judd (right), of The Judds, perform at the Girls’ Night Out: Superstar Women of Country in Las Vegas in April 2011

They first got attention singing on Ralph Emery’s morning show in early 1980, where the host named them the ‘Soap Sisters’ because Naomi said she used to make her own soap.

After the success of ‘Mama He’s Crazy,’ they won the Horizon Award at the 1984 CMA Awards. Naomi started her speech by saying, ‘Slap the dog and spit in the fire!’

Daughter Ashley Judd is an actress known for her roles in such movies as ‘Kiss the Girls,’ ‘Double Jeopardy’ and ‘Heat.’

Larry Strickland, who was a backup singer for Elvis Presley, was married to Naomi Judd for 32 years.