China could claim the moon as its own territory and BAN US astronauts from touching down, NASA boss warns – as the two countries battle in new space race to land on the lunar surface again

A chief at NASA is raising red flags over China’s ambitions to get to the moon.

In a new interview, NASA Administrator Bill Nelson says he and others within the scientific agency are growing increasingly concerned over what the country plans to do when they make it to the moon.

Nelson believes China could attempt to corner the market on resource-rich locations on the moon’s surface and try to block out the U.S. and other countries looking to make it to the lunar object.

‘There is potentially mischief China can do on the moon,’ said one other official monitoring the ‘space race.’ 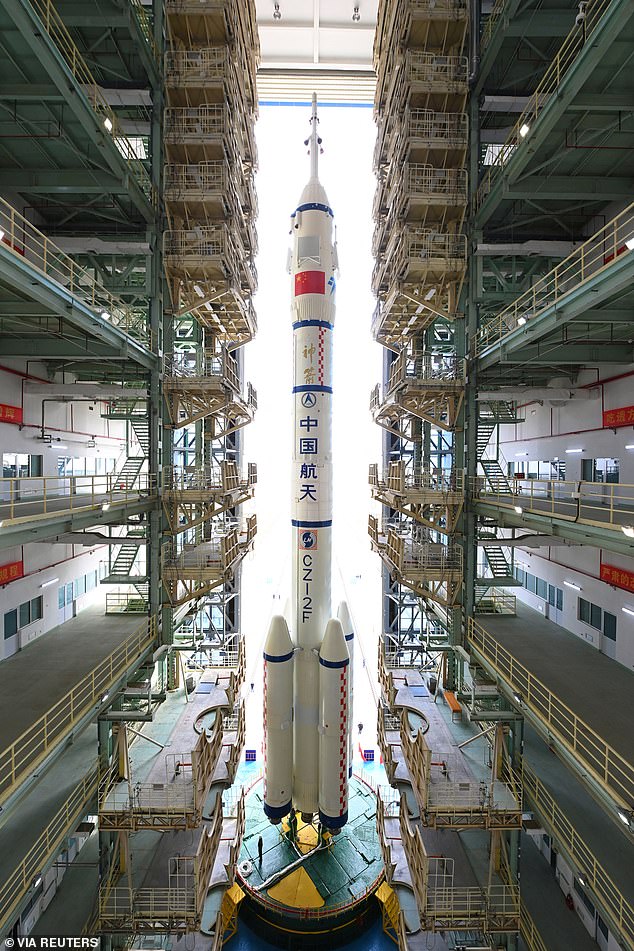 ‘There is potentially mischief China can do on the moon,’ said one other official monitoring the ‘space race’ 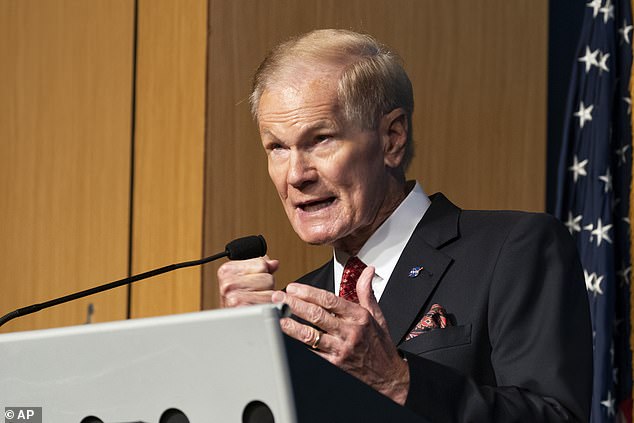 The concerns come less than one month after three Chinese astronauts returned from a six month trip in which they helped to build and open a new space station.

In an interview with Politico, Nelson said he and others are concerned the Communist nation will attempt to claim territory over the moon upon their arrival.

‘It is a fact: we’re in a space race,’ said the NASA administrator who was appointed by U.S. President Joe Biden in 2021.

‘And it is true that we better watch out that they don’t get to a place on the moon under the guise of scientific research. And it is not beyond the realm of possibility that they say, “Keep out, we’re here, this is our territory,”‘ Nelson continued.

The NASA boss said he fears China will mimic their strategy when it came to claiming land- and water- in the South China Sea.

‘If you doubt that, look at what they did with the Spratly Islands,’ Nelson said.

China has taken claim over the hotly contented Spratly Islands and have used the islands to house weaponry and other structures possibly large enough to store ballistic missile launchers. 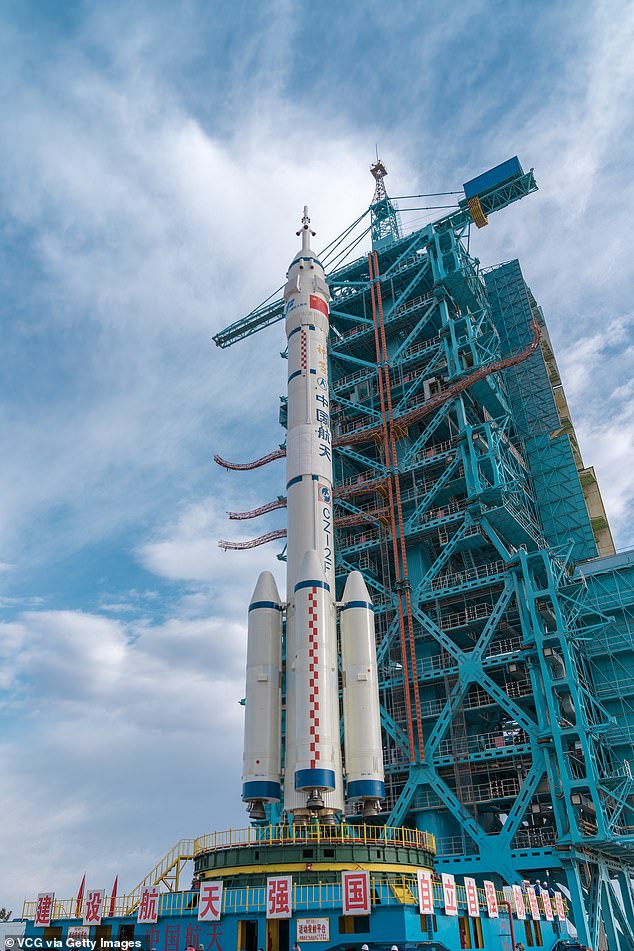 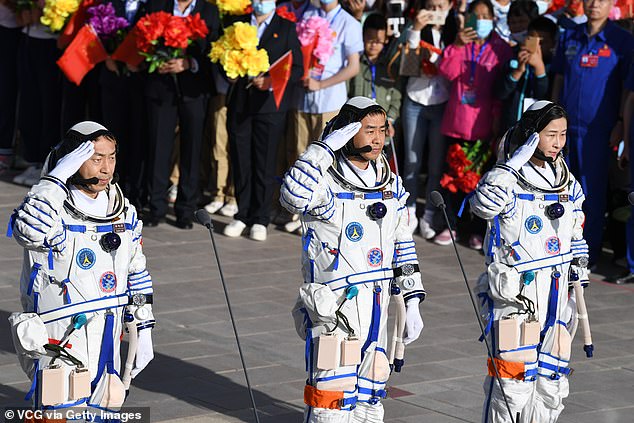 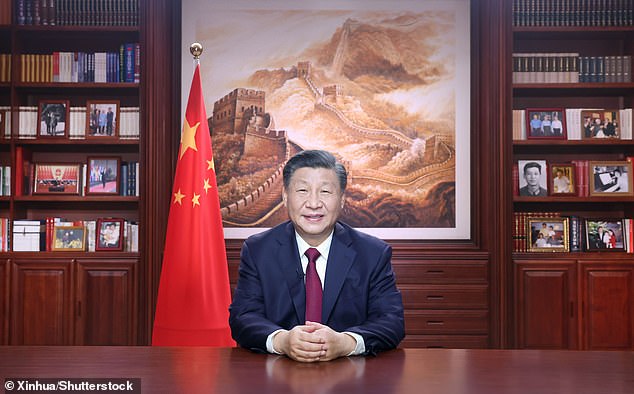 Security officials worry China could attempt to block the U.S. and other countries from the moon

NASA and China’s space program are both working overtime to make it to the moon in the coming years and have spent recent months working towards the goal.

The 26-day Artemis I mission from November to December was considered a success as an Orion capsule orbited the moon, moving NASA one step closer to its goal of building a human presence on the moon.

Estimates say NASA could see success in their mission as early as 2025.

Nelson’s concerns could be exasperated by Congress’ passage of a budget that did not include the full funding the agency requested.

Despite the agency not receiving the full budget, Nelson said they will still fund all of their most important assets, including the upcoming Artemis II and Artemis III moon missions. 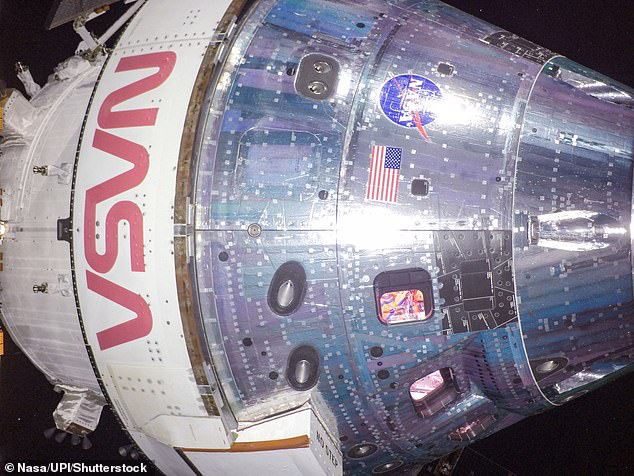 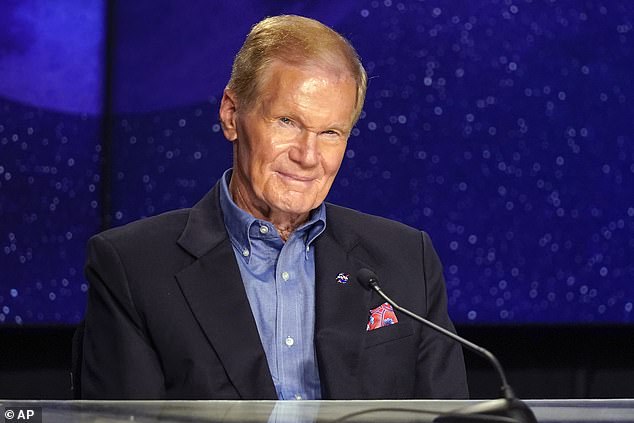 The primary concern is that delays in any of NASA’s programs in the coming years could put the U.S. behind china.

‘The progress they’ve made has been stunning — stunningly fast,’ Armagno said.

China in the last few years alone has launched orbiters, landers, and rovers that have reached the moon and Mars.

‘China within the last decade has had enormous success and advances,’ echoed Nelson. ‘It is also true that their date for landing on the moon keeps getting closer and closer.’

Another key concern for security experts is that China’s broader space goals could include interfering with space systems operated by the United States. 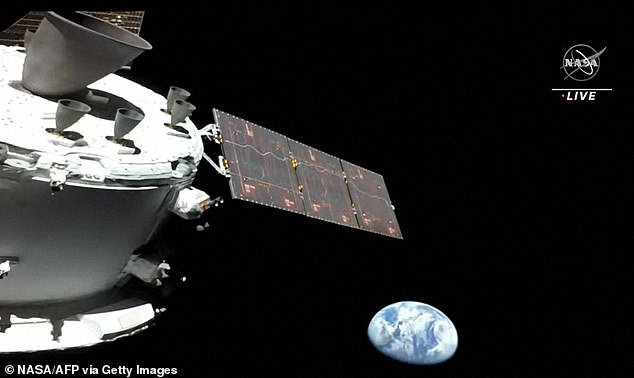 One former commander of the International Space Station said they believe the country who comes out on top in the has much to gain from the ‘space race.’

‘On one level, it is a political competition to show whose system works better,’ said Terry Virts, the former commander of the International Space Station.

‘What they really want is respect as the world’s top country. They want to be the dominant power on Earth, so going to the moon is a way to show their system is working. If they beat us back to the moon it shows they are better than us,’ Virts said.

Virts believes the Chinese government could work swiftly to dominate space if given the chance. 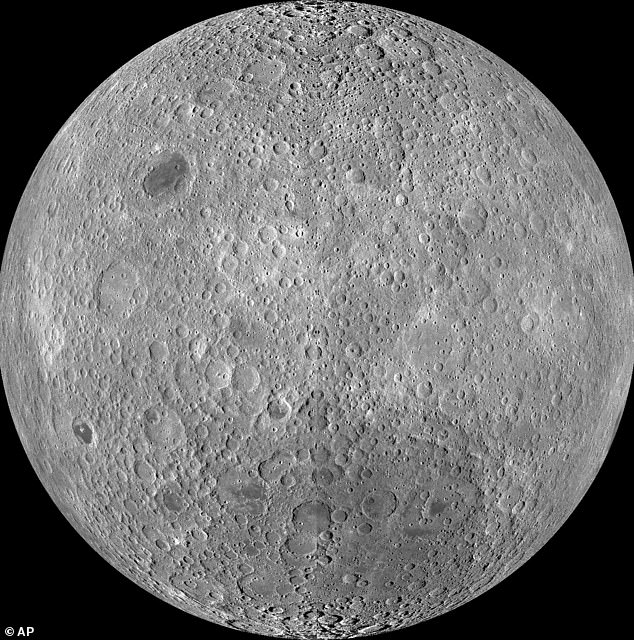 ‘If they set up infrastructure there they could potentially deny communications, for example,’ said the former commander for the International Space Station

‘There is potentially mischief China can do on the moon,’ Virts said.

‘If they set up infrastructure there they could potentially deny communications, for example. Having them there doesn’t make things easier. There is real concern about Chinese meddling,’ Virts continued.

Chinese officials deny any assertions made by U.S. space and security experts.

‘Some U.S. officials have spoken irresponsibly to misrepresent the normal and legitimate space endeavors of China,’ said Liu Pengyu, spokesperson for the Chinese Embassy. ‘China firmly rejects such remarks.’ 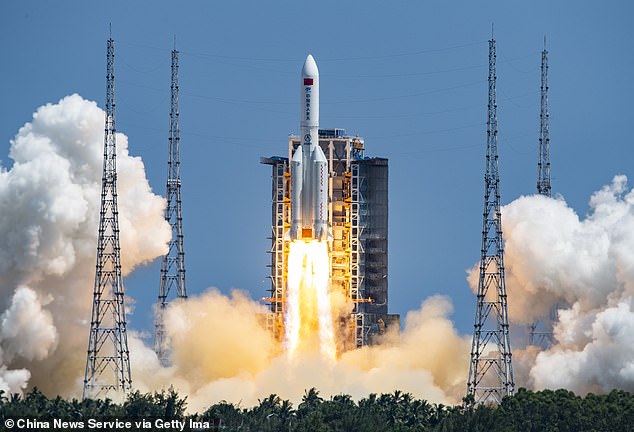 One Chinese official vehemently denied the assertation that China could work to block the U.S. from the moon of meddle in other space relations

Nelson said with the approval of $24.5 billion for 2023, a five percent increase over 2022, he believes NASA will have enough to cover the ‘essentials.’

The goal for the next Artemis mission is to have it operational ‘within two years,’ according to Nelson.

‘Hopefully we can speed that up,’ he said, sharing that the agency hopes to send a crew into the moon’s orbit by 2024.

That goal may be ambitious, however, as Nelson told Politico. 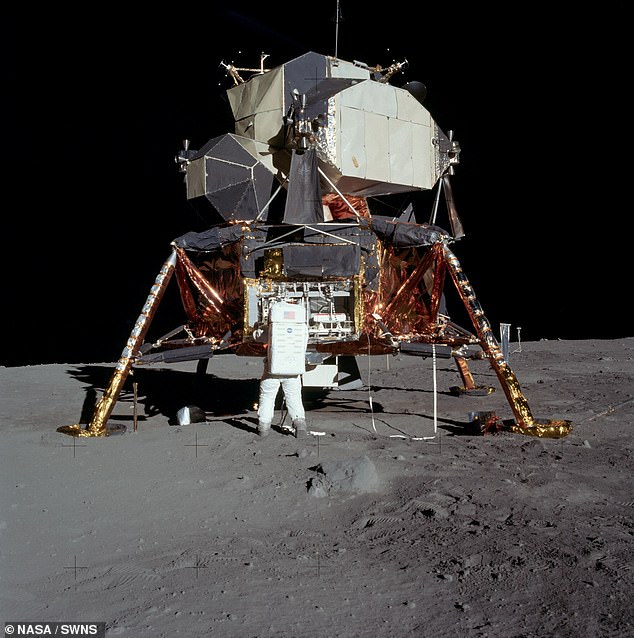 The U.S. is hopeful they can put astronauts back on the moon by 2025

‘They tell me they can’t [speed it up,] that they need that time to redo them and recertify and all that,’ of the process to use the avionics from the Artemis I in a cost-saving move.

The eventual goal is to get astronauts back on the moon by 2025.

‘All of that is going to depend on two things,’ Nelson told Politico.

‘The space suits, are they ready? And is SpaceX ready? And I ask the question every day: ‘How is SpaceX’s progress? And all of our managers are telling me they are meeting all of their milestones.’

‘The good Lord willing,’ said Nelson when asked if the U.S. will make it back to the moon before China. 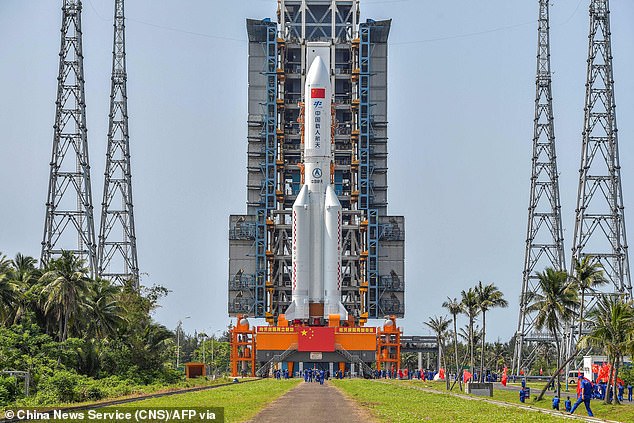 China has made major strides when it comes to space in recent years, sending multiple rovers and orbiters into space 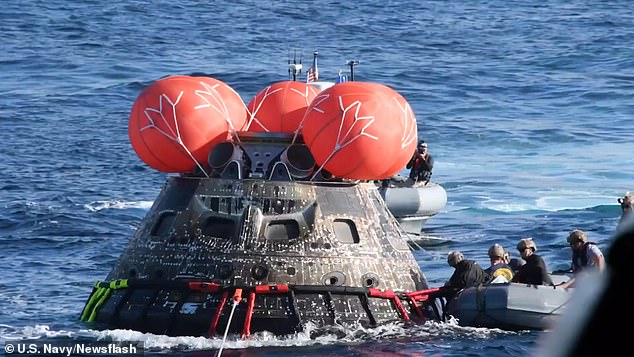 Not all are entirely concerned that the U.S. may find itself in a full-blown ‘space race,’ however.

Samson pointed to the Outer Space Treaty and states that countries who signed, including the U.S. and China, are unable to make claims on the moon.

She did however agree the two countries could fight for limited resources.

‘That’s where we have made the argument that there is a need to engage with China,’ Samson said. 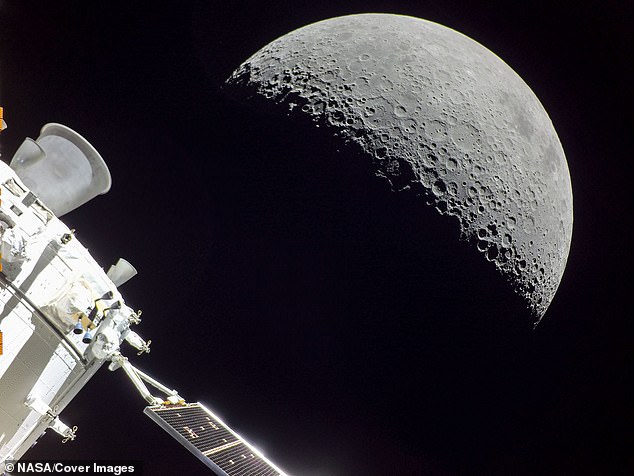 One space expert says they are not concerned over China blocking the U.S. from the moon or meddling in relations, but that the nation could claim valuable and limited resources