Dog poo bins have been removed from a popular National Trust-run beauty spot because they keep overflowing.

Park rangers at Ludshott Common in Hampshire say they have been able to keep up with the amount of poo bags being left at the 735 acre site.

Unable to dump their poo bags, dog walkers have turned to stacking them on top of the red waste bins.

Less considerate dog walkers have been hanging their bags on trees leaving the area in a ‘sad and sorry state’, National Trust staff say.

Now bosses of the charity have decided to remove the bins and are instead urging visitors to take their poo bags home.

Matt Bramich, Head Ranger for Ludshott Common, said: ‘Due to the huge increase in dog walkers using Ludshott Common in the past year, we have really struggled to keep up with the disposal of dog waste left in our bins, on top of all our other duties. 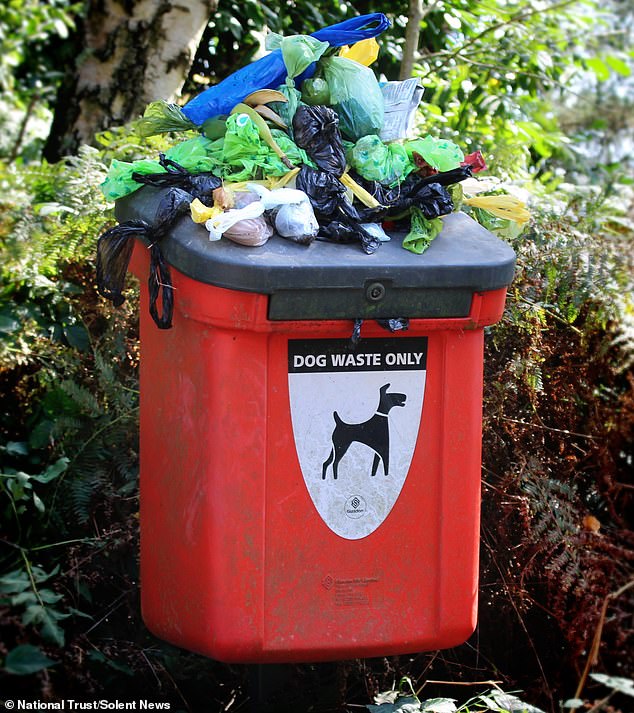 Dog poo bins have been removed from a popular National Trust-run beauty spot because they keep overflowing. Pictured: An overflowing dog poo bin at Ludshott Common in east Hampshire 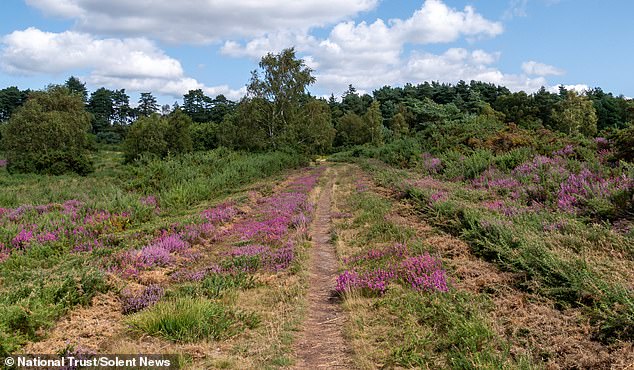 ‘Emptying them costs the charity a lot of money, and we’re still unable to keep on top of the problem – they fill up more quickly than we can empty them.

‘It’s a sad and sorry way to treat a beautiful place like this, and it causes a health and safety risk to other visitors and to our staff.

‘As a charity, we have limited funds for waste disposal, so as a result, we have made the difficult decision that the dog waste bins on Ludshott Common will be removed.

‘We want people to visit the common, to enjoy this beautiful landscape and its wildlife, but we need dog owners to help us look after it by picking up after their dog and taking their dog waste home with them.’

Ludshott Common, which is one of the largest remaining areas of heathland in east Hampshire, had seen a rise in visitors over the pandemic.

As a result, the rangers came across more issues impacting the park, including littering, fly tipping, destruction of pathways due to increased footfall, altercations between livestock and dogs, as well as the dog poo problem.

Meanwhile, pet ownership is on the rise, with millions of Britons purchasing animal companions during last year’s Covid lockdowns.

According to Pet Food Manufacturers’ Association, an estimated 3.2 million UK households welcomed a new pet into their family during lockdown, with dogs and cats being the most popular animals.

Many pets were bought to help people cope with loneliness during lockdown, while an increase in working from home during the pandemic has allowed those worried about leaving their pets home alone to make the move. 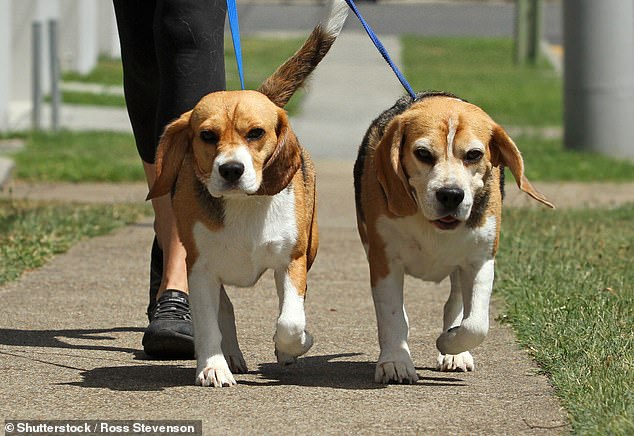 According to Pet Food Manufacturers’ Association, an estimated 3.2 million UK households welcomed a new pet into their family during lockdown, with dogs and cats being the most popular animals. Library image.

Londoners were the most likely to have added a pet to their family with almost one in five (18 per cent) having picked up a pet. Over one third (35 per cent) of millennials said they bought – or were likely to buy – a pet during the pandemic.

Tenants are also increasingly looking for pet-friendly homes with interest in such properties online soaring 120 per cent, according to figures from Rightmove.

But the increase in dog ownership may have led to more dog waste on the street.

Research has suggested a 200 per cent rise in dog waste on UK streets since the pandemic began – even though the majority of pet owners were found to clean up after their animals.

The research was carried out by Divert.co.uk, who provide dog poo litter removal for councils and private landowners.

Spokesperson Mark Hall said: ‘It is disgusting to see that some dog owners are failing to pick up after their pets, when it’s an offence and the waste can lead to serious illnesses.’