SAN FRANCISCO — A backdoor pass is intercepted. A crosscourt pass is picked off. A simple dribble handoff is fumbled, and a lob is robbed.

These are the giveaways that have become routine for the Boston Celtics, and one of the central stumbling blocks causing them to be on the brink of giving away this NBA Finals after being up 2-1.

Game 5 on Monday was no different — as they lost to the Golden State Warriors 104-94 to fall down 3-2 — and it involved the usual suspects.

“I don’t know if it was fatigue affecting the decision-making a little bit there, or just physically don’t have the burst to finish it off,” said Celtics head coach Ime Udoka. “That has been a problem for us obviously at times in this series, quarters specifically where we’ve gotten a little stagnant. When we do it well, it works, it looks good, we get shots we want. We slow it down, play in the crowd, those turnovers pop up in the bad offense.”

Boston is now 1-7 in these playoffs when turning the ball over on 16 or more occasions.

That is an understatement.

Tatum has committed 95 turnovers in these playoffs, a record-high for a player in any single playoff run. At this point, there’s no stopping him from reaching the century mark. 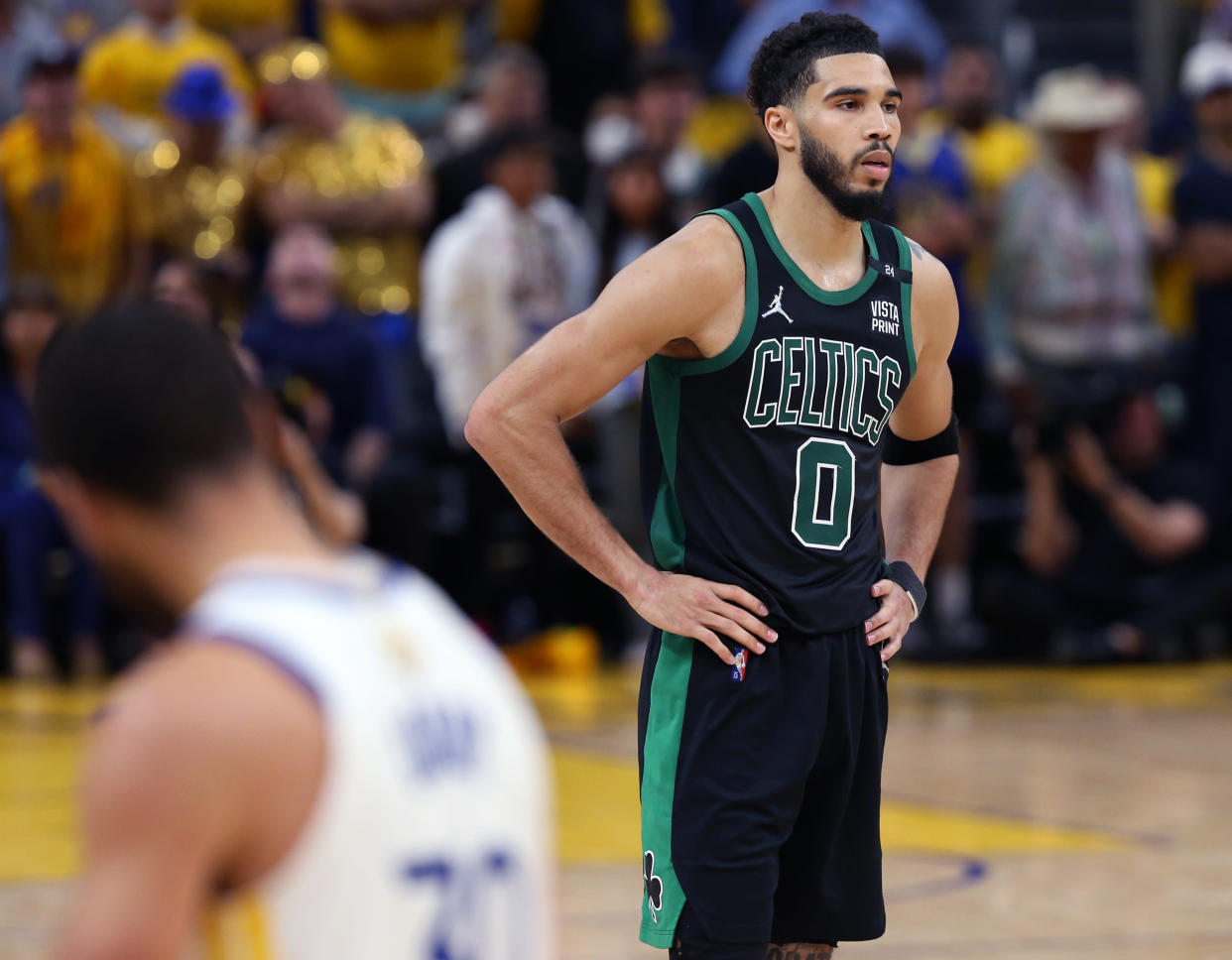 Golden State deserves credit for filling in the gaps on defense. Tatum and Brown, specifically, have repeatedly attempted to penetrate in tight windows with no high degree of success.

“Spacing was an issue with them being physical, especially in the first quarter,” Udoka said of the turnovers. “They kind of blew up some of our actions. We were playing basically on top of each other.”

Offensively, they’ve also been putrid, as Yahoo Sports’ Ben Rohrbach chronicled beautifully. It was as close to a must-win game as possible for the Celtics, and they came out and hit the scoreboard for a measly 16 first-quarter points.

Their third-quarter outburst of 35 points was the only frame they showed up for as the game would have been a rout.

“Yeah, that’s on us,” Tatum said of the start. “We got to obviously start better, not dig ourselves a hole. We gave ourselves a chance. We played extremely well in that third quarter. We were up six or seven at one point. Then just trying to sustain that level of play. We got to do it more often than not throughout the course of the game to give ourselves a chance.”

Offense comes and goes, but attention to detail and executing should never waver. That’s what’s happening with the Celtics’ giveaways.

This team is one of the most undisciplined teams to advance to this stage in quite some time. The next comparable team might be a decade ago, the young Oklahoma City Thunder in 2011-12.

Inexperience and fatigue are certainly issues, particularly with Udoka shortening his bench minutes. But the carelessness at this juncture remains inexcusable.

Boston could have been up 3-1 before faltering late in games. What makes them believe they can win the next two contests?

“I ain’t got no choice [but to believe],” Brown responded. “We don’t have no choice. It’s win or go home at this point. We worked incredibly hard all season to put ourselves in this position.”

Correction: Boston has worked incredibly hard to put the Warriors in this position. If the trend stands, the Celtics are 16 or more turnovers from giving the Warriors their fourth title in eight years on Thursday.

They have been preaching consistency throughout the series, but the one one consistent tendency has been giving the Warriors extra possessions.