The new president of the Australian Medical Association says many healthcare workers have been shocked by an attitude that stretched hospitals and exhausted staff are the cost of doing business in a pandemic. 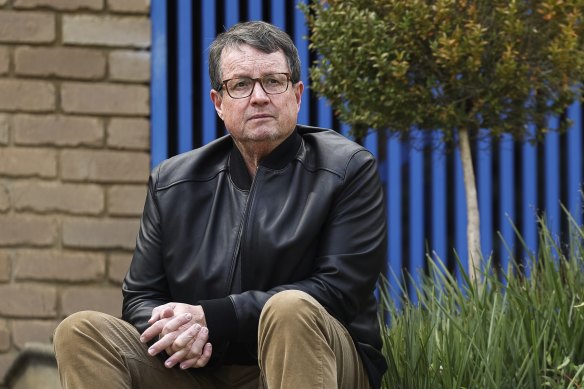 New AMA chief Steve Robson says he will continue to push the federal government to boost funding for public hospitals by billions each year.Credit:Alex Ellinghausen

In his first detailed interview with The Age and The Sydney Morning Herald, while isolating at home with COVID-19, he said trying to put a hospital staff roster together was “proving almost impossible” as many hundreds of COVID-19 patients continued to occupy beds that would otherwise be filled by people with other conditions.

“One of the things that’s been shocking for many healthcare workers is going to work and facing these incredible pressures … their leave is cancelled, they are working double shifts … and they leave [work] and they hear political leaders and business leaders saying, ‘Oh, nothing to see here’.

“I think that has been a shock to a lot of healthcare workers, that perhaps there is a sense that they don’t matter … and hospitals are absolutely stretched beyond the breaking point, but, ‘That’s okay, it’s the cost of doing business’.”

Robson disagreed with critics that the AMA had waning influence, as tensions between the Victorian and federal branches of the group persists, saying it had more influence than ever, because of its ability to bring a consensus view from the medical community.

Opinions on the management of the pandemic have varied widely, with doctors and infectious diseases experts sometimes among those airing their disagreements freely on social media.

Robson said he would continue to push the federal government to boost funding for public hospitals by billions each year. However, his top priority is reforming general practice as “one of the most cost-effective ways of keeping Australians healthy”.

The Albanese government has pledged $1 billion for a Medicare taskforce aimed at improving GP affordability and access, a move Robson described as a “down payment”.

Meanwhile, the 59-year-old said he was confident that it would be possible to resolve an issue with the Victorian branch of the AMA, which had established an “associate membership” for Victorian doctors allowing them to save money by only joining AMA Victoria. Ordinarily, half the fees should be sent to the federal body.

Victorian AMA president Dr Roderick McRae, who also stood in the federal election, said about 2000 of the 7600 members had taken up this option. However, he echoed Robson’s confidence that the issue could be resolved, saying there was “definitely every likelihood there would be an agreement reached”.

Several years ago, Robson spoke about his suicide attempt as a junior doctor decades earlier, which was thwarted by a visit from a caring colleague, in the hope that other people might learn from his experience.

“I have lost two colleagues in the last year to suicide, so it’s still happening. Particularly with the pressure that people are under at the moment, I think that we need to just really say it’s okay to own up to this, to seek help, and for other people who see someone struggling, to offer help.”

The former president of the Royal Australian and New Zealand College of Obstetricians and Gynaecologists said while he understood that everybody was “sick of everything to do with COVID” it was disappointing that more hadn’t been done to educate the public as mandates ended.

He said he would like to see a “massive campaign”, for example, with sportspeople, actors and other celebrities urging people to take steps to help protect others.

“I get politicians are very anxious. They think if we mandate mask-wearing, it’s difficult to enforce, and it brings out protesters … so I understand that, but I think at the same time, there are other ways around it.”

Robson takes the reins from Dr Omar Khorshid, whose entire presidency was served during the pandemic. Under his leadership, the AMA campaigned successfully for higher-quality face masks to protect frontline workers.

“Despite tons of anecdotal and scientific evidence, it took an awfully long time for our public policy leaders to accept the airborne spread, and that resulted in unnecessary branches of hotel quarantine, for instance,” Khorshid said.

The orthopaedic surgeon said mask mandates could have had a role in the latest Omicron wave, even if they weren’t enforced, by providing an “unequivocal statement” about what was expected.

“It’s obvious to us that our hospitals would be in a better position, there would be less people off work … and there would be minimal impact on individual lives. It’s not like a lockdown; we’re talking just ‘wear a mask when you’re in public in indoor venues’.”