A NEW Banksy-style artwork of a typewriter has been defaced in Reading – days after another painting by the artist was targeted by the same vandals.

The new work, which features the words 'cherish, love, hope', was spotted on a bridge in the Berkshire market town, delighting locals. 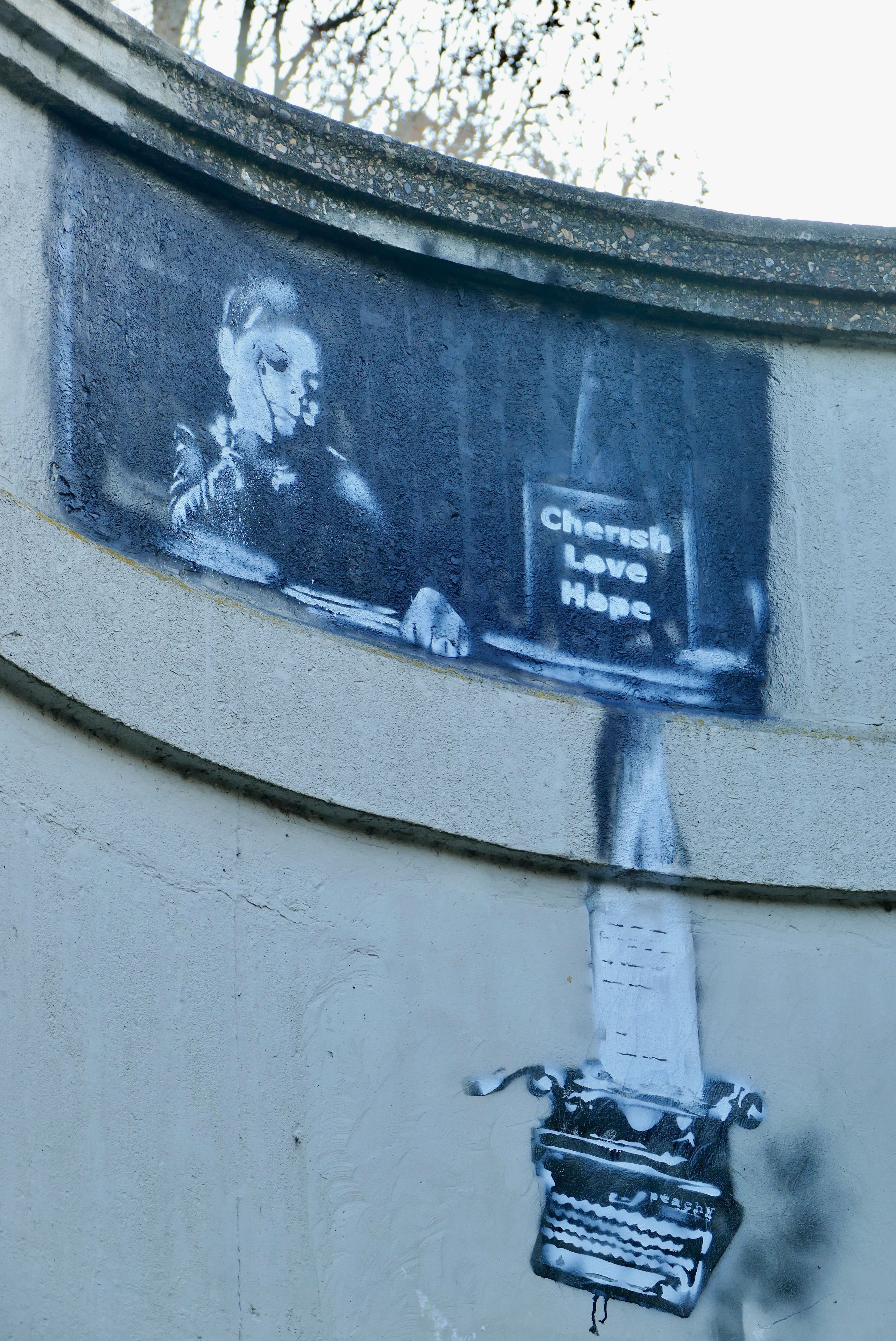 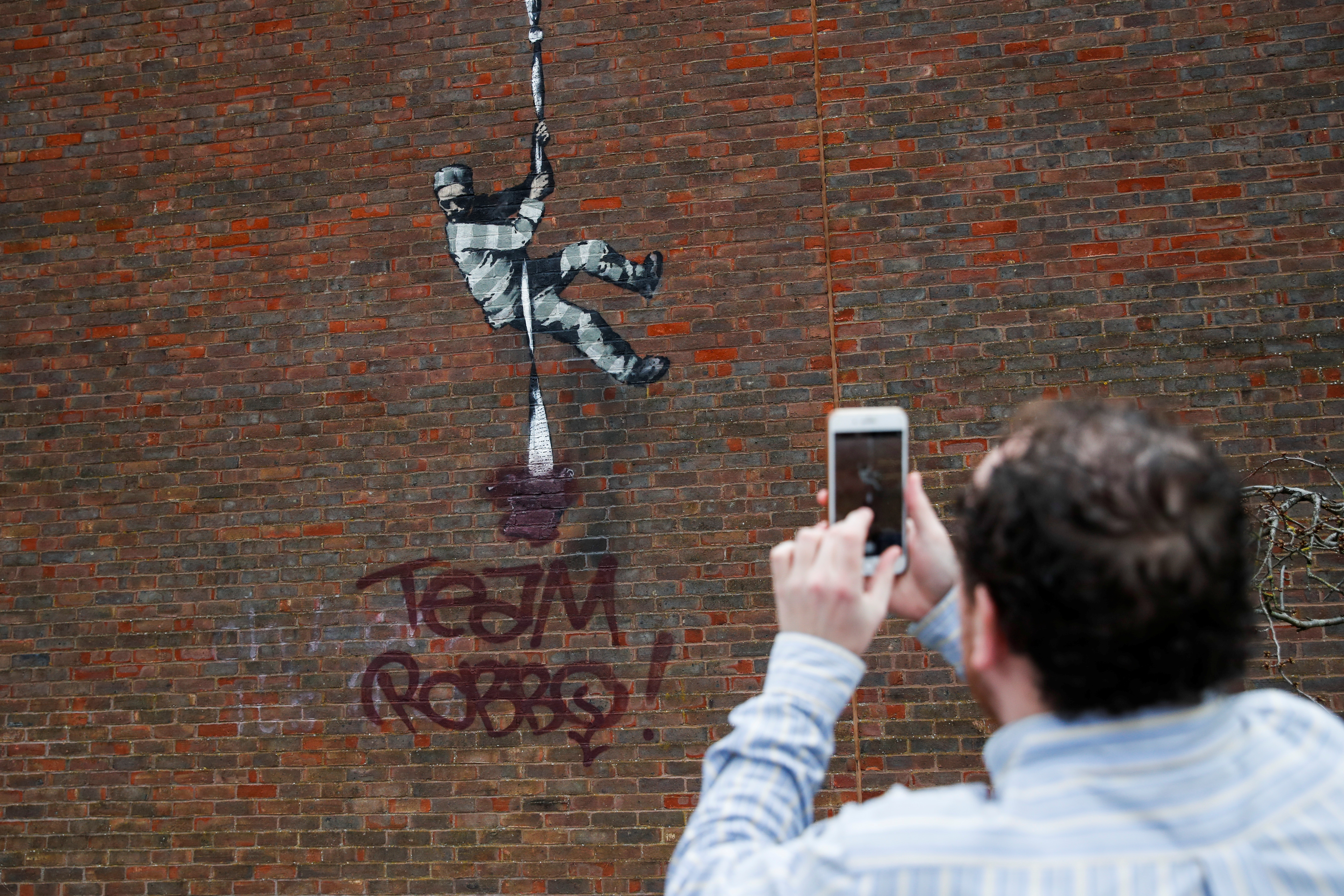 But it's already been daubed with paint – just a week after rivals graffitied the words 'Team Robbo' on an image of a prisoner escaping Reading Prison.

The guerrilla artist hasn't yet confirmed he's behind the new work, although the piece appears to be mirrored on the first image.

The original image on the walls of the jail, believed to be inspired by famous inmate Oscar Wilde, shows a man escaping on a rope of bedsheets tied to a typewriter.

Banksy confirmed he was behind the artwork through a video posted on his website.

The clip – entitled Create Escape – shows the piece being created under the cover of darkness, set to archive commentary from American painter Bob Ross.

But just days later, the typewriter was covered with 'Team Robbo' graffiti. Robbo was a graffiti artist involved in a long-running feud with Banksy. He died in 2014.

A second image of a typewriter then appeared on the walls of the bridge.

And it's already been partially covered with the word 'Team Robbo' in black paint, with the letters 'OFK' in a circle beside it. 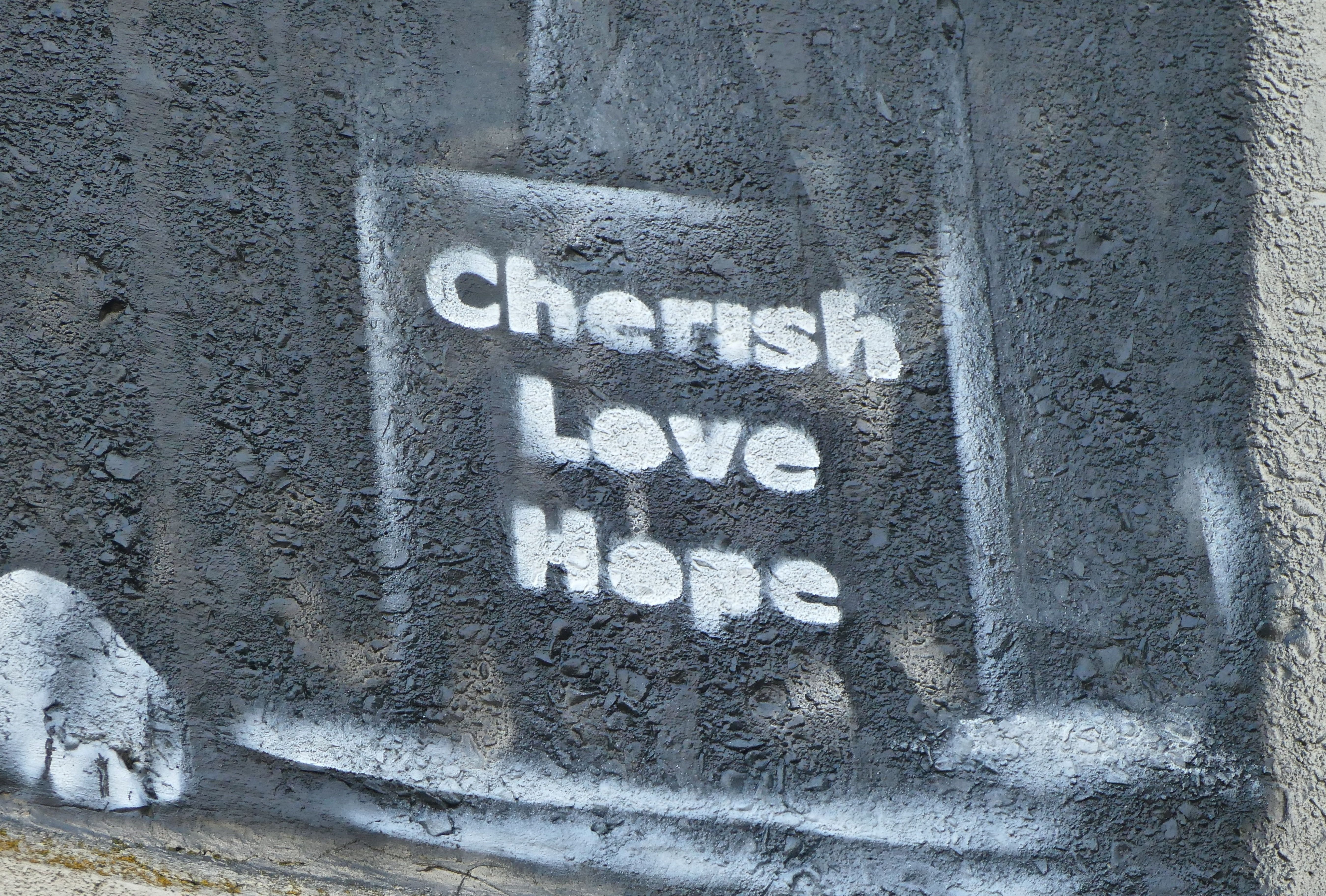 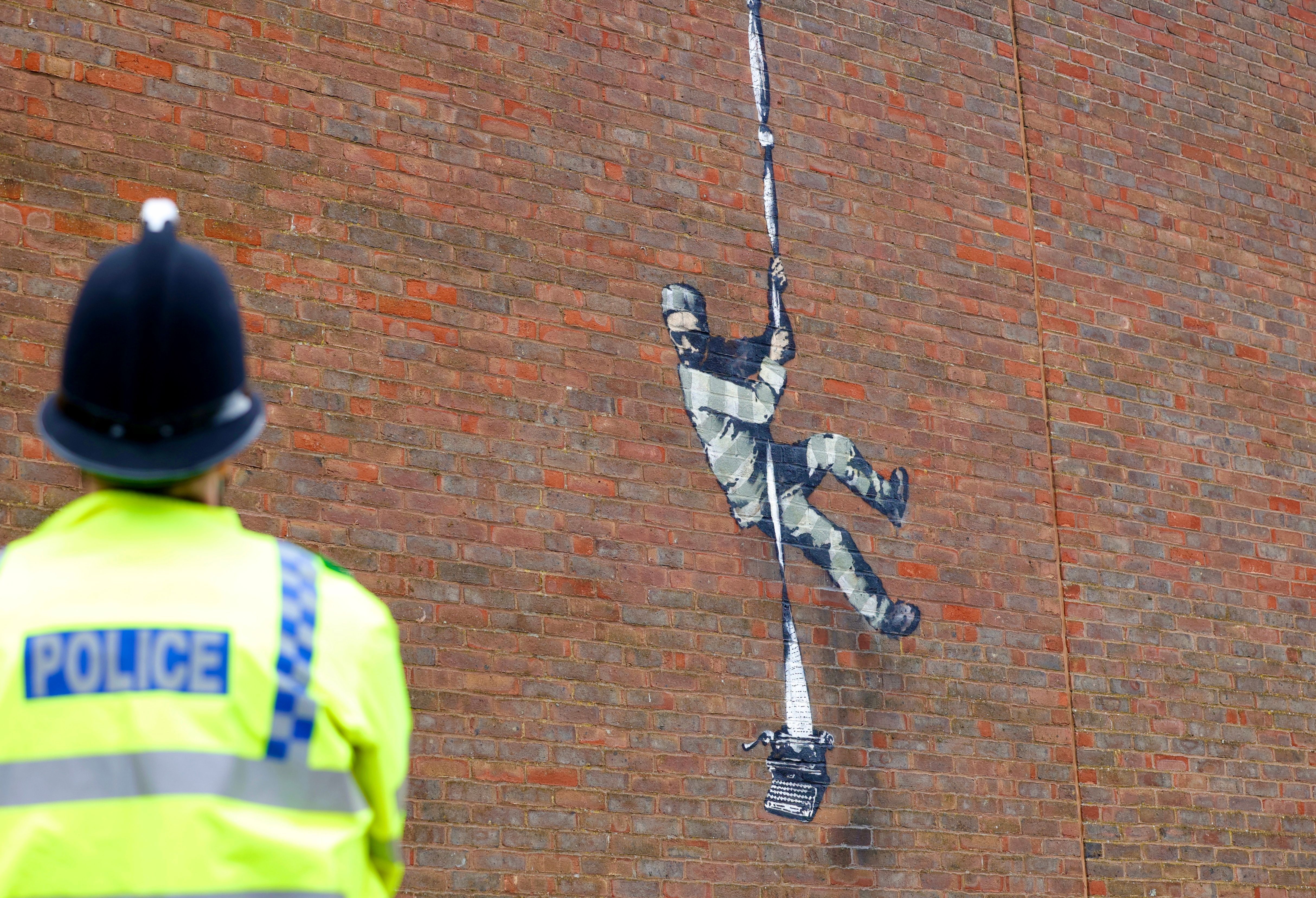 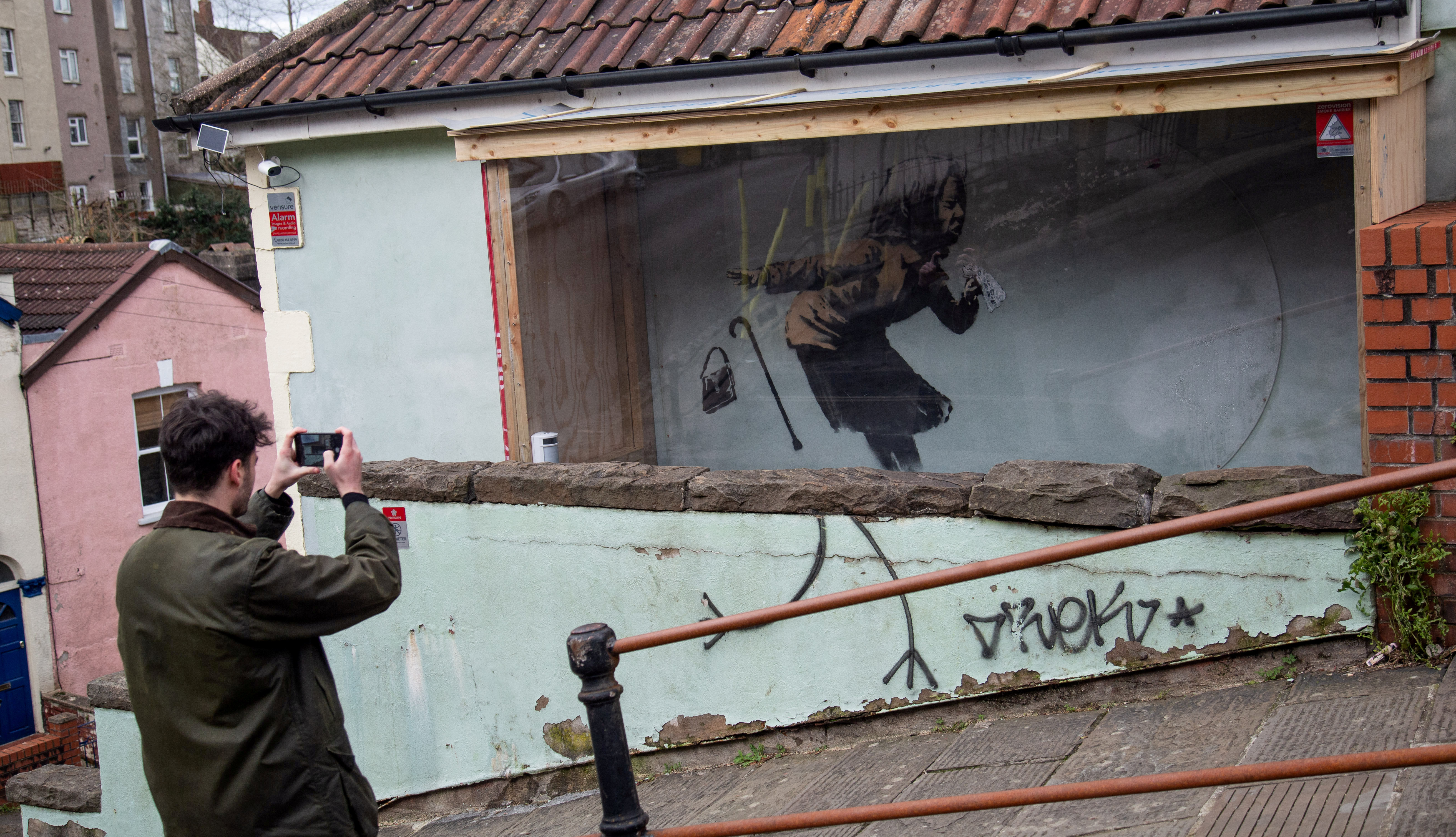 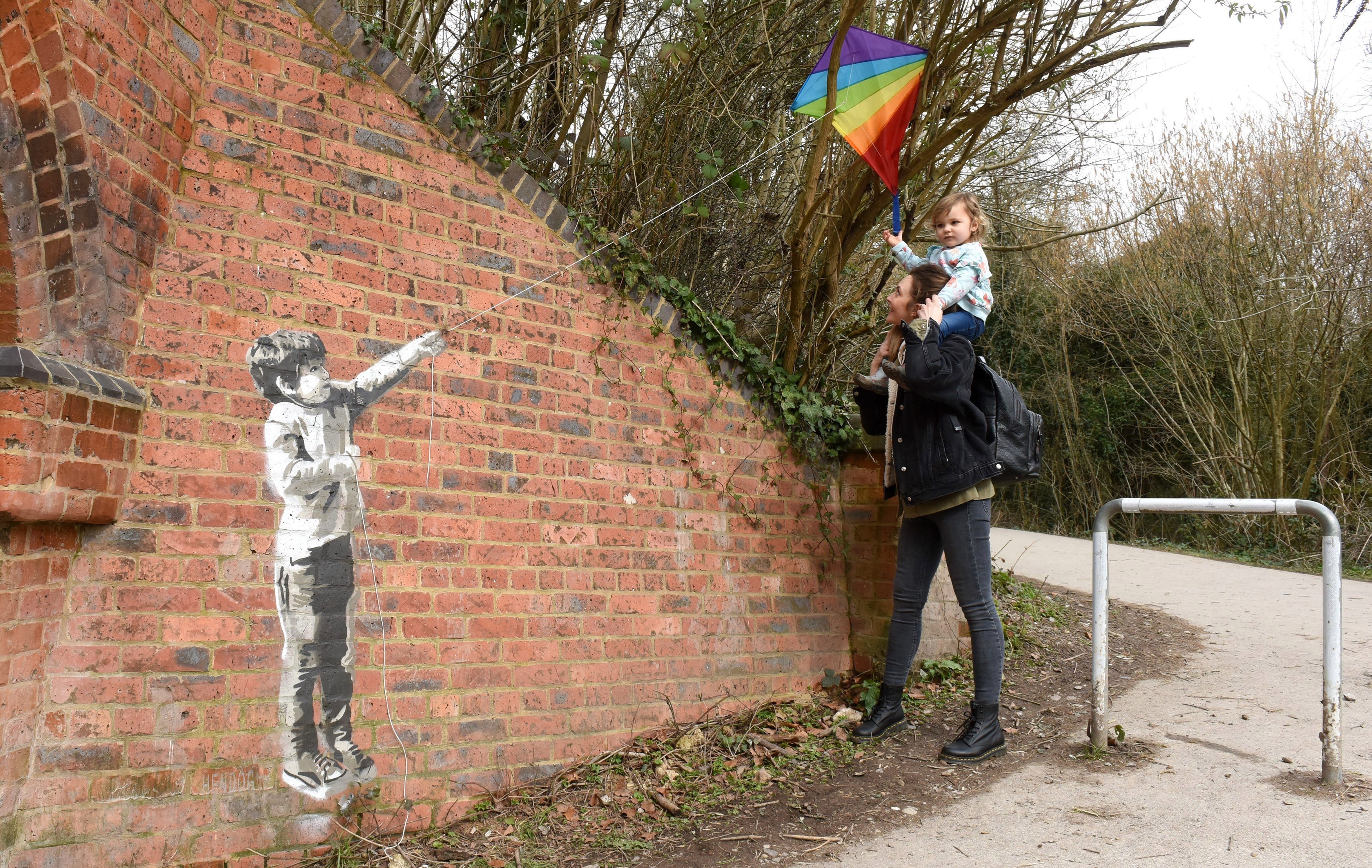 Reading East MP Matt Rodda said he was "deeply disappointed" by the vandalism.

He told GetReading he hopes the artworks can be restored to their "former glory".

Meanwhile, Ministry of Justice have put fencing around the artwork on the jail after Reading Borough Council called on the Government to protect the mural.

He said: “I remember the days of King Robbo and Banksy and the back and forth between them.

"I'm not sure tagging in Robbo's name now has the same effect.”

Movie star Kate Winslet, who was born in the town, said the artwork on Reading Jail must be preserved.

Banksy has never been unmasked and it is believed his refusal to reveal himself started as a way of avoiding prosecution for vandalism.

The elusive artist is believed to have given a glimpse of his identity in a 2003 interview  ahead of his Turf War exhibition.

He is wearing a baseball cap and has a T-shirt pulled over his lower face, but his eyes, eyebrows and forehead are visible.

He tells Gordon, who has since retired: "I'm disguised because you can't really be a graffiti writer and then go public.

"The two things don't quite go together."

Last year, Art Attack presenter Neil Buchanan was forced to deny he was the mysterious artist.

Speaking to the BBC, the Titanic star said that the “incredible Banksy piece of wall art” ought to remain and form part of the “legacy” of a new cultural hub.

“I just felt incredibly excited for Reading to have a Banksy,” she said.

“If Reading had a legacy space like that, to hand on to generation after generation, it could really be as valuable as some of those central London theatres.”

Banksy has created a series of surprise artworks throughout the lockdown.

Earlier this month, a suspected Banksy showing a child holding a kite appeared on a wall in Winchester, Hampshire.

Confirmed artwork Game Changer, a tribute to frontline nursing staff, is set to raise £3million for the NHS.

And in December, he daubed an image of an elderly woman sneezing on the side of a semi-detached home set to sell for £300,000 – causing the property's value to rocket to 'millions'.