Officers with the New York Police Department responded to a call about vandalism around 1:30 a.m. Friday at the building, located on East 91st Street. 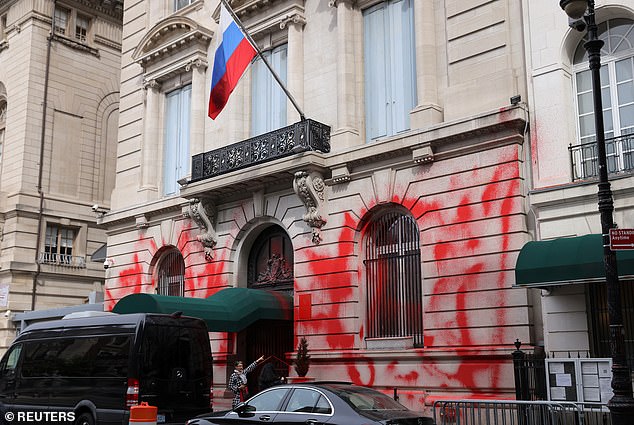 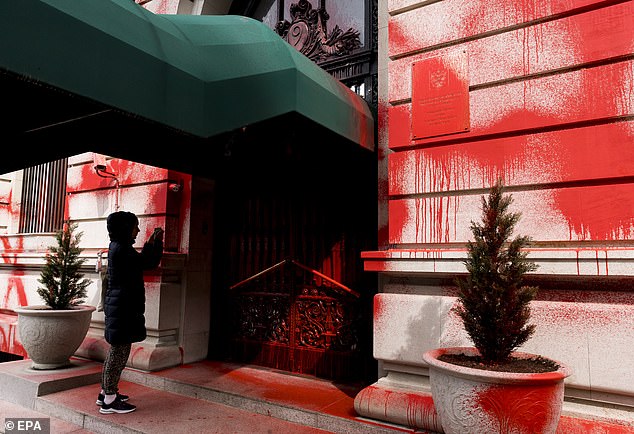 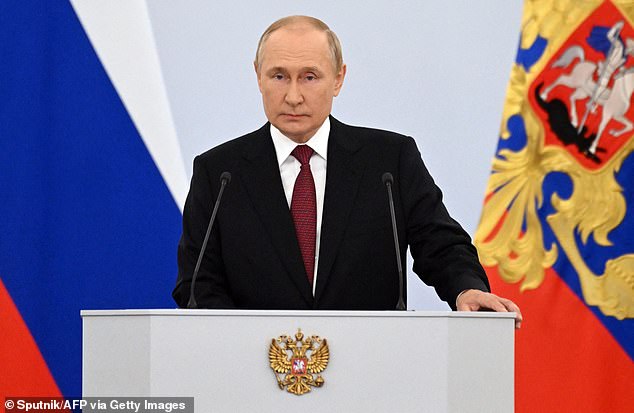 The vandalism did not contain any words or apparent pictures.

Alleged video of the incident surfaced online Friday, showing an unidentified man spraying the building with the paint.

That video appears to have been taken by a security camera for the building next door to the Russian Consulate.

The unknown suspect looks to be both masked and hooded, using a long-necked device to splatter the paint high up on the building.

DailyMail.com asked police if they had any footage that would be shared with the public, but they said they do not at this time. 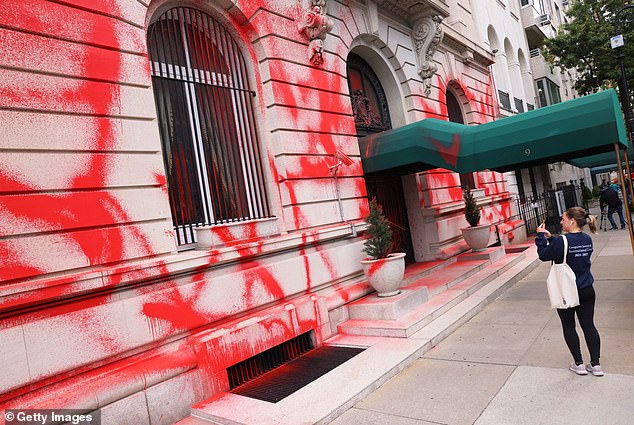 Photos of the building do show at least two cameras pointed at the street.

NYPD officials told the DailyMail.com that no suspects have been identified in this case as of yet.

This may not be the first incident of vandalism at the consulate, however. 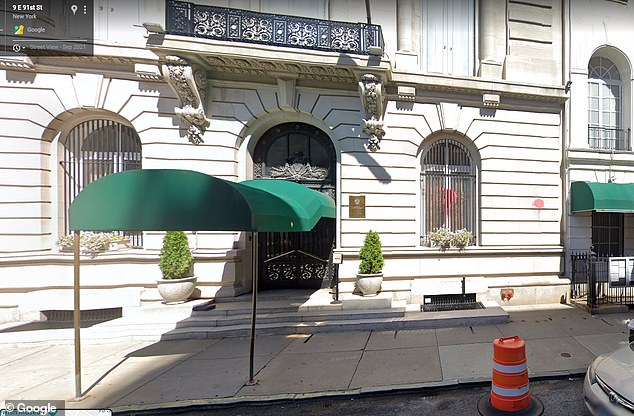 Photos from Google Maps of the Russian Consulate show what appears to be red paint on the right side of the building, covering the window and the facade

The incident came just hours ahead of when Putin proclaimed that four Ukrainian regions will be part of Russia and become Russian citizens forever.

On Friday, Zelensky submitted an application to formally become a member of NATO, utilizing a fast-tracked process

President Joe Biden also responded by announcing that a new round of sanctions would be imposed upon Russia following Putin’s actions. 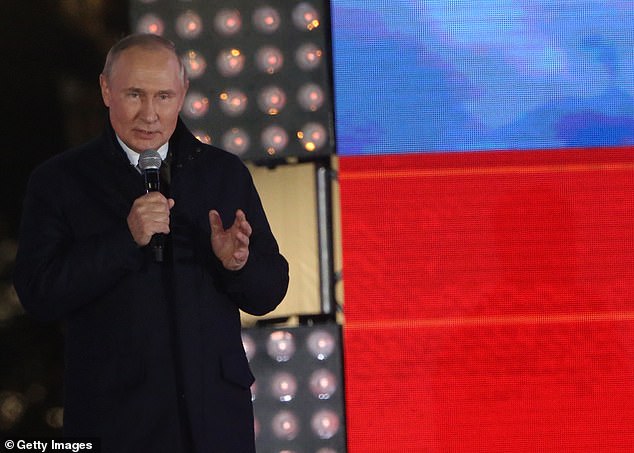 The areas Putin is looking to annex make up some 40,000 square miles of Ukrainian territory.

The Russian president said he plans to protect the regions in question by ‘all available means,’ creating even more worries among the West who would be forced to act should Ukrainian territory be invaded.

Biden said Friday the US is ‘prepared to defend every inch of NATO territory.’

Putin also accused the United States of creating a nuclear weapons ‘precedent’ at the end of World War II when the country bombed Japan. 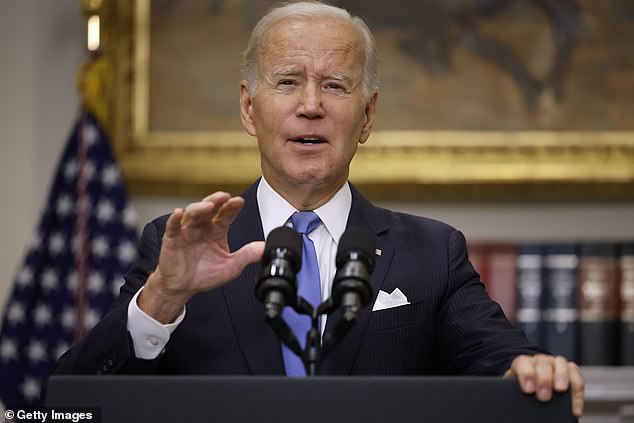 The Russian president’s comments worried many NATO members and US allies who fear that the conflict could be inching towards a massively destructive ending.

Putin blamed the West for his invasion of Ukraine because they believe Russia is a ‘colony’ and a ‘band of slaves, and wants to break it up into smaller states who ‘will be fighting against each other.’

President Joe Biden, in addition to a live press conference addressing Americans, released a statement Friday claiming that the annexations have ‘no legitimacy’ and will not be recognized by the U.S. He also announced a new set of sanctions in response to the move.

‘The United States will always honor Ukraine’s internationally recognized borders,’ Biden said in the statement, adding: ‘We will continue to support Ukraine’s efforts to regain control of its territory by strengthening its hand militarily and diplomatically.’ 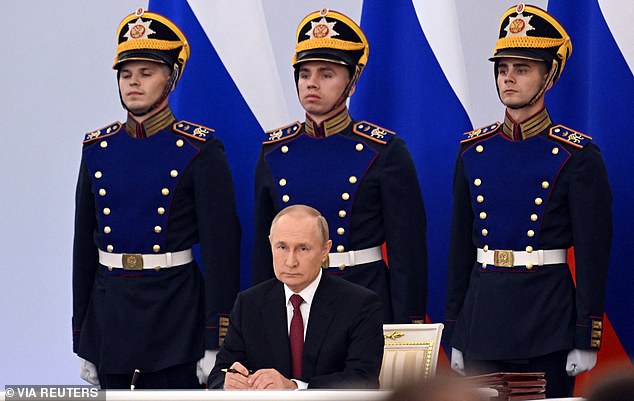 He underlined his comments by speaking to Putin directly, amid fears that the Russian leader could seek to further challenge the west by trying to go after a member of the NATO alliance.

That could once again put the alliance’s unity to the test, after nations have spent months rallying to the Ukrainian cause and shipping increasingly powerful weapons to the the nation on its eastern flank.

Biden said allies are ‘going to stay the course to provide military equipment so that Ukraine can defend itself.’ He pointed to the continuing resolution providing an additional $13 billion ‘to help the Ukrainians defend themselves and fight back.’

He also said any country who wants to ‘live by the rules of the United States’ are ‘political masochists.’

Putin even made the outlandish claim that the US is occupying Germany in downplaying the relationship between the two nations. 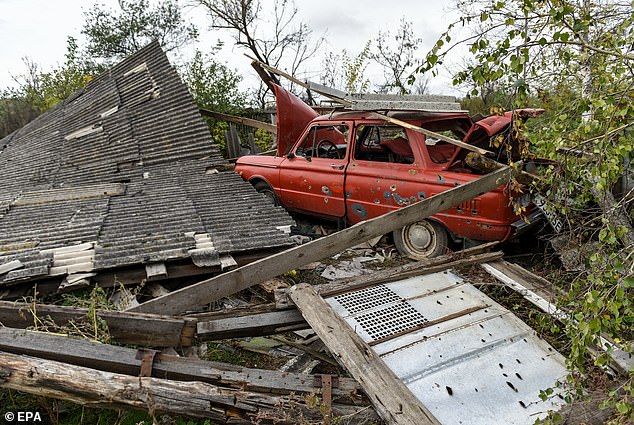 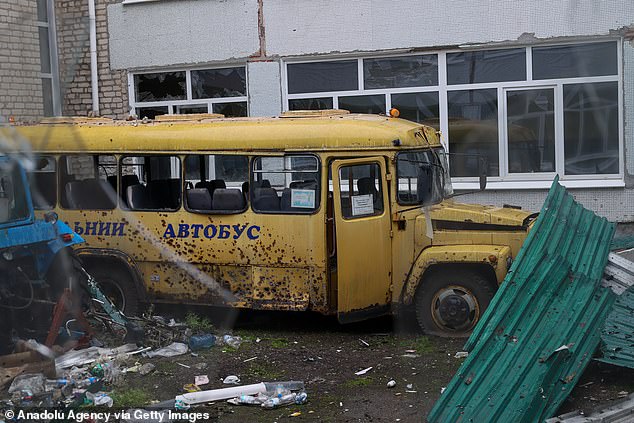 ‘Germany is still their vassal, but the United States is still calling them an ‘equal ally.’ This is a real shame,’ the Russian leader said.

Announcing on Friday that he was annexing four Ukrainian regions, Putin delivered a blistering speech claiming Russia would use ‘all the power and all the means’ at its disposal to defend its new lands from attacks by the West or Ukraine and to help liberate the world.

The Russian despot, speaking in front of his cronies in Moscow, declared that ‘millions of people’ had ‘opted’ to become vassals of Russia after staging sham referendums in which gun-toting troops went door-to-door with clear glass ballot boxes in order to force people to vote.

‘They are our people, forever,’ he said to a standing ovation inside the Kremlin’s grand Georgian Hall before calling on Ukraine and its Western allies to abandon hopes of re-taking them, repeating a threat to use ‘all forces’ to defend the ‘new territories’.

He said: ‘The West wants to see Russia as a colony, an unfree society.’

‘One of the reasons for the centuries-old Russophobia is that we did not allow ourselves to be robbed during the period of colonization, we forced Europe to trade on an equal footing,’ Putin added, claiming he has plans for ‘intervention.’

Putin slammed the US for being the only country to have twice used nuclear weapons against another nation and also accused America of leaving a ‘terrible mark on the history of Korea and Vietnam’ with engagements in conflicts in both conflicts. 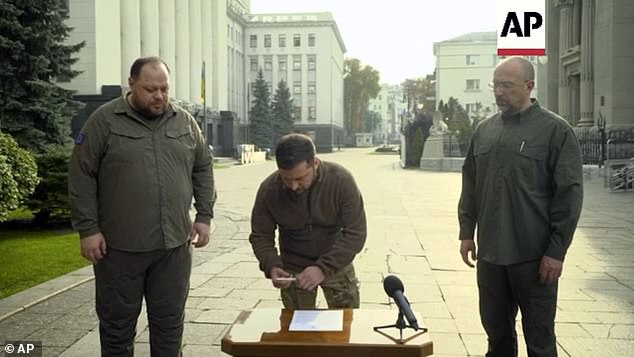 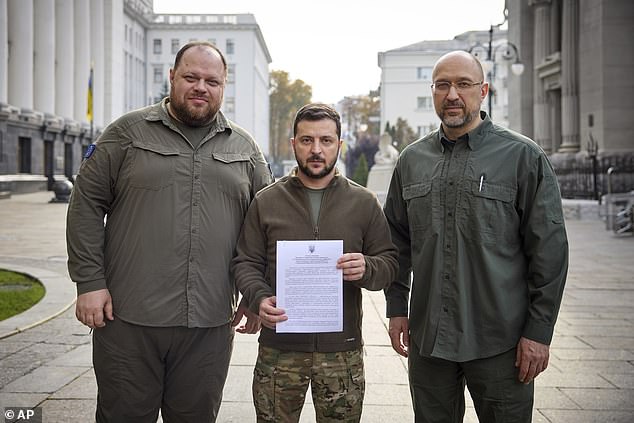 European nations, which have been reeling under soaring energy prices caused by Russia’s invasion of Ukraine, have noted that it is Russia, not Europe, that benefits from chaos in the energy markets and spiking prices for energy.

Putin claimed that the US is to blame for the bombing of the Nord Stream pipeline.

He also called the West ‘satanic’ because of the rejection of ‘moral norms’ in an attack on liberalism. Unlike Russia, he claimed that the US and other western nations have turned away from ‘traditional’ and ‘religious’ values.

At one point in the speech, he asked the assembled dignitaries if they wanted ‘children to be offered sex-change operations,’ a practice he implied was widespread in the West.

‘From the elementary grades, perversions were imposed on children, which lead to degradation and extinction,’ he said. ‘To be drummed into them that there are supposedly other genders besides the woman and the man and offered to have a sex change operation? This is unacceptable for us.’

In his two decades in power, Putin has routinely promoted what he says are ‘traditional values’ and suppressed LGBTQ rights through a number of laws and by backing ultra-restrictive social movements and initiatives.

Putin’s forces invaded Ukraine in February with claims that the nation wants to be united with Russia – and now he has claimed four regions have voted to be annexed to the Kremlin. 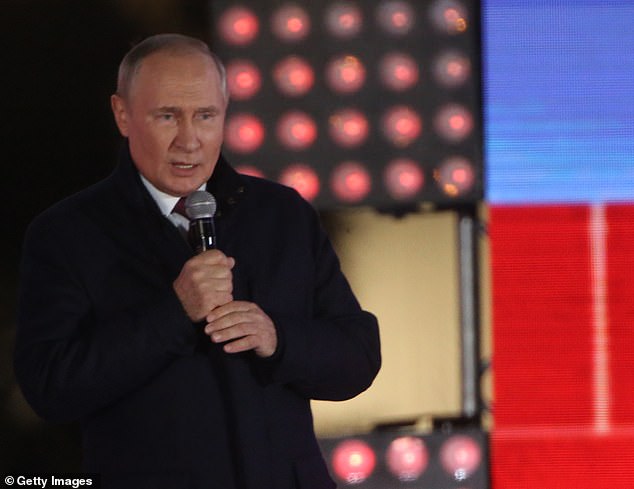 Russian President Vladimir Putin said the United States had created a ‘precedent’ by using nuclear weapons against Japan at the end of World War Two, in a speech filled with hostility towards the West delivered from the Kremlin on Friday

Putin’s promise to protect his ‘new territories’ will be put to an almost-immediate test, possibly within hours, as thousands of Russian troops are currently thought to be encircled in Lyman, in the Donetsk region.

The city is on the verge of falling with troops either being captured or killed in the process.

Russia is also continuing to attack the regions it now claims as part of its own country, firing a rocket at a humanitarian convoy of cars in Zaporizhzhia earlier in the day – killing at least 25 civilians and wounding 50 in the process. The cars were heading into Russian-occupied territory to distribute aid, Ukrainian officials said.

‘Only complete terrorists could do this,’ he claimed, telling Putin, ‘You will definitely answer [for it]. For every lost Ukrainian life!’

Putin promised in his remarks that Moscow would rebuild all the cities and towns in Ukraine that were destroyed by his assault on the eastern European nation.