Meet the newly-WETS! Bride and groom are drenched as plane drops a huge column of water on them in extraordinary wedding photo shoot

This is the incredible moment a plane drops water on a couple during a wedding photoshoot.

Footage shows a plane flying over the couple dressed in white during their rehearsal photoshoot in Sorriso, Brazil. 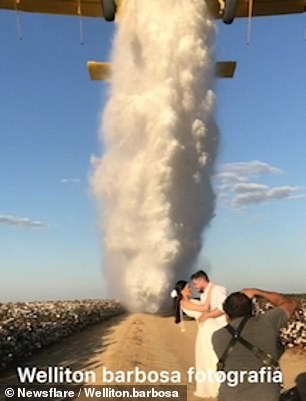 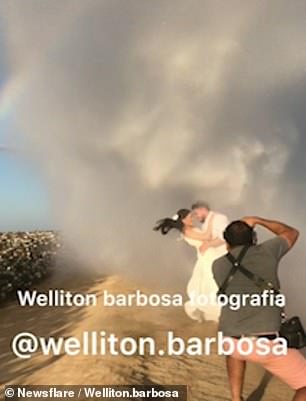 Photographer Wellinton Barbosa took the pictures of the couple, called Priscila Serraglio and Alisson Picinin, for a pre wedding photo shoot as they got drenched by a column of water

The yellow aircraft flies low behind them as they embrace and hold their pose for the camera on a dirt road between two fields of flowers.

The pair are soon engulfed in water and are no longer visible as a rainbow appears briefly over the top of them.

After the plane has passed overhead, the soaked couple cheer in excitement at the experience.

Pictures of the spectacular photography were uploaded to Instagram on July 18 and got over 21k likes.

Users loved the idea behind the shoot, with one commenting: ‘Seriously the most epic idea ever.’

The second video shows a couple at a similar backdrop who appear to be doing a  photo shoot for a gender reveal.

The aircraft flies behind a couple who are holding hands, and the woman has one hand placed under her baby bump.

Footage was uploaded to the photographer’s Instagram earlier this week and showed the aircraft emitting a trail of blue smoke. 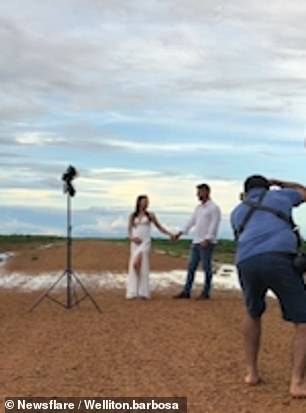 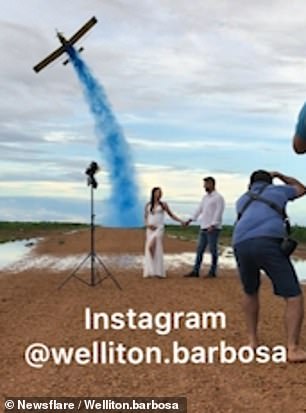