Newsnight’s Emily Maitlis reveals the secret behind getting that blonde bob TV-ready – only wash it once a week! 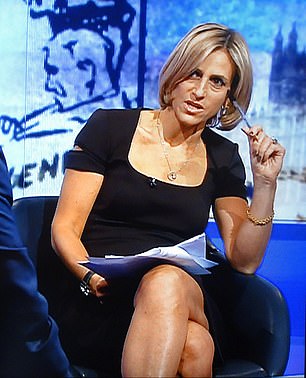 Fearless interviewer Emily Maitlis isn’t afraid to get her hands dirty during the cut and thrust of fierce political debate.

But it turns out that she’s happy to let her hair get a bit grimy, too – claiming she sometimes goes six days at a time without washing it.

Miss Maitlis, who became Newsnight’s anchor this week, claimed her bob looked better on screen when it was dirty, and that it was ‘easier’ not to bother washing it.

The 48-year-old added: ‘Sometimes on location, I have to run around hot, humid wet places and I find it easier not to wash my hair for six days as it sits better. Unwashed hair looks better on camera.’

She also admitted to crying after she comes off air, saying she wept frequently – and was becoming more tearful as she got older because of the ‘accumulated horror’ of the stories she has covered.

She even broke down during the interview in which she discussed the issue. The BBC presenter said: ‘I hold it together for interviews then digest it afterwards. I do weep then. It gets harder as you get older and you realise that everything is so vulnerable.

‘It’s partly to do with having children and that sense of accumulated horror.

‘Everything is so fragile and you have covered plane crashes and train crashes and terrorism and shootings and individual deaths and mass deaths and avoidable deaths and medical ****-ups and you can’t leave your human self at the door.’

Such emotional vulnerability presents a different face to the one the married mother of two presents on television, where she is known as a combative political interrogator.

She divided opinion this month when she rolled her eyes on air when Labour MP Barry Gardiner failed to give her a straight answer. It drew comparisons with famously aggressive former Newsnight host Jeremy Paxman. But Miss Maitlis denied that she used a similar approach.

She told The Times: ‘I wouldn’t call myself confrontational. You have to be forensic. The difference is I don’t feel the need to be bombastic, but if you haven’t had the answer then I think you’re entitled to point that out. I don’t pull my punches.’