Football superstar Neymar said Tuesday he always signed documents his manager father told him to, as he took the stand at his trial in Spain over alleged irregularities in his transfer to Barcelona in 2013.

‘My father has always been in charge’ of contract negotiations, Neymar said when questioned by prosecutors who are seeking a two-year prison sentence for the Brazil Paris Saint-Germain forward for alleged corruption over his contract.

He also said he did not remember if he took part in the negotiations which led to an agreement sealed in 2011 with Barcelona over his transfer two years later to the Catalan side from Brazilian club Santos. 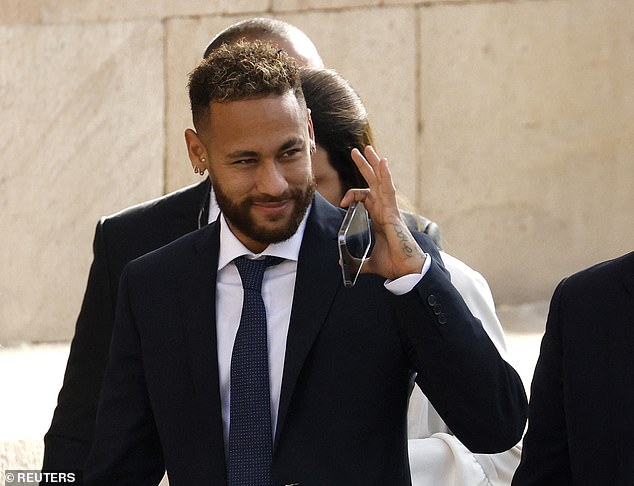 Pictured: Brazil’s Neymar arrives to stand trial in a corruption case over his transfer to FC Barcelona, October 18, 2022

The footballer, who agreed to be questioned in court only by the state prosecutor and his defence lawyer and not by lawyers acting for Brazilian company NIS, was on the stand for less than 15 minutes.

He spoke mainly in his native Portuguese through a translator.

He was asked whether he had participated in negotiations for a contract he signed in November 2011 while he was still at Brazilian boyhood club Santos where he agreed to play for Barcelona in 2013.

Neymar initially responded: ‘I don’t remember’ before adding in response to a second question from the state prosecutor about negotiations and contracts: ‘I didn’t participate. It was always my father who looked after that and was responsible for that. I sign what he tells me to.’

The footballer, who wore a dark blue suit with a matching tie over a white shirt, admitted: ‘I had offers from other clubs but my dream was always Barcelona. Real Madrid was one of the options but my heart was always for Barcelona.’

Neymar took the stand after Real Madrid president Florentino Perez was called as a witness and told the court the club offered 45 million Euros to sign the Brazilian International in 2011.

He insisted: ‘I don’t know Neymar, I’ve never spoken with him personally.

‘We were interested in signing Neymar about 10 years ago. Players go where they want. Neymar wanted to go to Barcelona and that’s why he went to Barcelona.’ 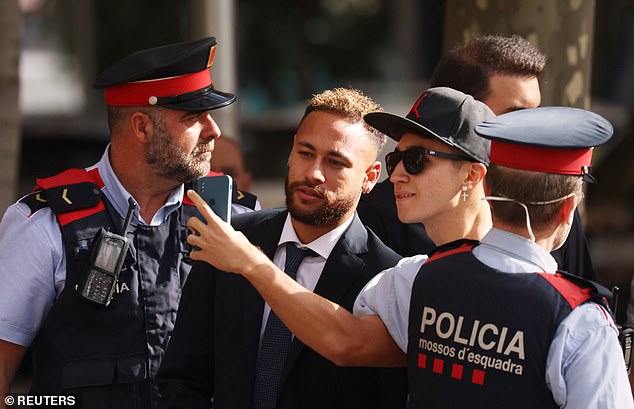 Pictured: Spanish police officers are seen standing around Neymar as a fan takes a selfie, as he arrives at court in Barcelona on Tuesday 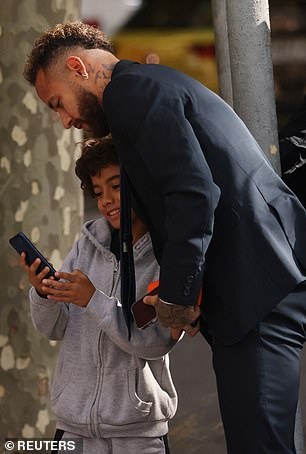 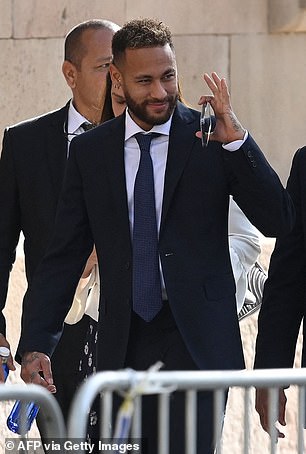 Neymar agreed to be questioned in court only by the state prosecutor and his defence lawyer and not by lawyers acting for Brazilian company NIS. He was on the stand for less than 15 minutes. Pictured: Neymar arrives to court on Tuesday

Yesterday, Neymar was allowed to skip the first day of his corruption trial after the judge took pity on the ‘tired’ footballer who scored PSG’s winning goal against Marseille on Sunday night.

Neymar’s defence lawyer, Maria Masso, said the striker had gone to bed in the early hours of this morning after scoring the only goal in the match against bitter rivals Marseille and undertaking a doping test before travelling to Barcelona for the trial.

Spanish prosecutors are seeking a two-year prison term for Neymar, a key member of the Brazil team that will be heading to the World Cup in Qatar next month, and the payment of a 10-million-euro ($9.7 million) fine.

The trial is the culmination of a years-long legal saga over Neymar’s 2013 move from Santos to Barcelona.

He then joined Qatar-owned PSG in a world record 222-million-euro transfer in 2017.

Neymar – one of the sport’s most recognisable figure – is one of nine defendants on trial on corruption-related charges, among them his parents and their N&N company, which manages his affairs. 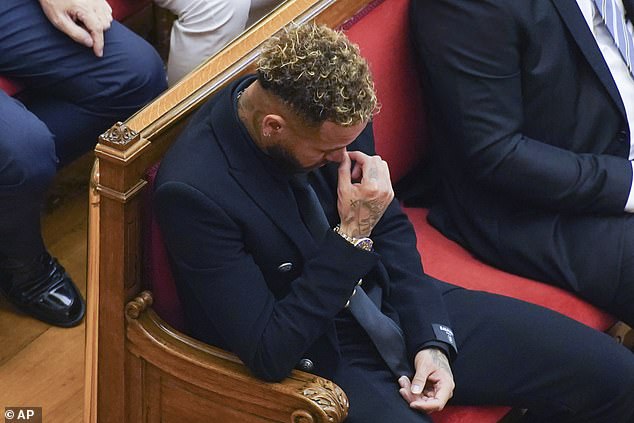 Lead judge Jose Manuel del Amo sparked laughter in the Provincial Court of Barcelona on Monday by telling the footballer he was free to leave after admitting: ‘He was scoring a goal and I was in bed. Pictured: Neymar rests his arm as he sits in the courtroom today

He had originally been set to testify on either October 21 or 28 but the Barcelona court hearing the case agreed to bring forward his hearing to avoid a clash with his commitments with PSG.

The player spent two hours at the court on Monday on the opening day of the trial before he was excused by the judge after his lawyers argued he needed to rest after playing Sunday night.

The player scored the only goal of the Ligue 1 match against Marseille.

Investigators began probing the transfer after a 2015 complaint filed by DIS, a Brazilian company that owned 40 percent of the player’s sporting rights when he was at Santos.

Barcelona said the transfer cost 57.1 million euros, but prosecutors believe it was at least 83 million euros. The club said it paid 40 million euros to N&N and 17.1 million to Santos, of which 6.8 million was given to DIS.

But DIS alleges that Neymar, Barcelona and the Brazilian club colluded to mask the true cost of the deal. 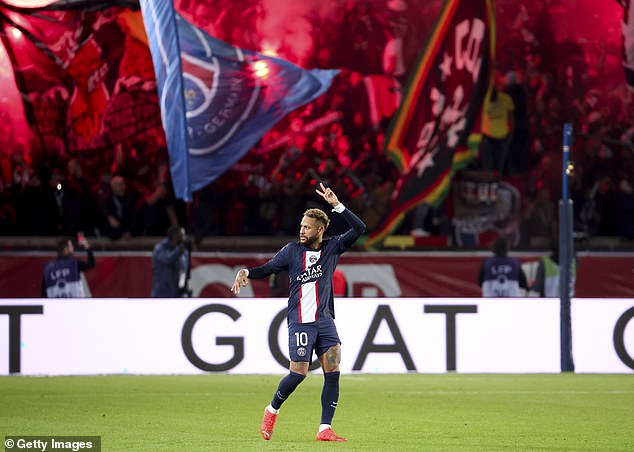 The company’s lawyer Paulo Nasser said last week that Neymar had ‘with the complicity of his parents and FC Barcelona and its directors at the time, and Santos FC at a later stage, defrauded DIS of its legitimate financial interests.’

Neymar’s lawyers insist their client is innocent, saying the 40 million euros was a ‘legal signing bonus which is normal in the football transfer market’.

They have said Spanish authorities lack jurisdiction to hear the case since the transfer involved Brazilian nationals in Brazil.

The trial is due to end on October 31.

Neymar’s abrupt departure for PSG five years ago sparked a string of legal disputes, with Barcelona withholding its contract extension bonus and suing the player for breach of contract, as Neymar countersued.

Both sides eventually reached an ‘amicable’ out-of-court settlement in 2021.

The footballer is having one of his best seasons since he joined PSG.

His goal against Marseille on Sunday was his ninth league goal of the season, and he has seven assists in 11 Ligue 1 matches.

Neymar is expected to play a key role for Brazil at the World Cup in Qatar, as the South American giants seek to win the trophy for the first time since 2002, and the sixth in total.

He will lead the Selecao into their Group G opener against Serbia on November 24.