Boko Haram fighters attacked two villages on outskirts of Maiduguri as well as a camp for internally displaced people. 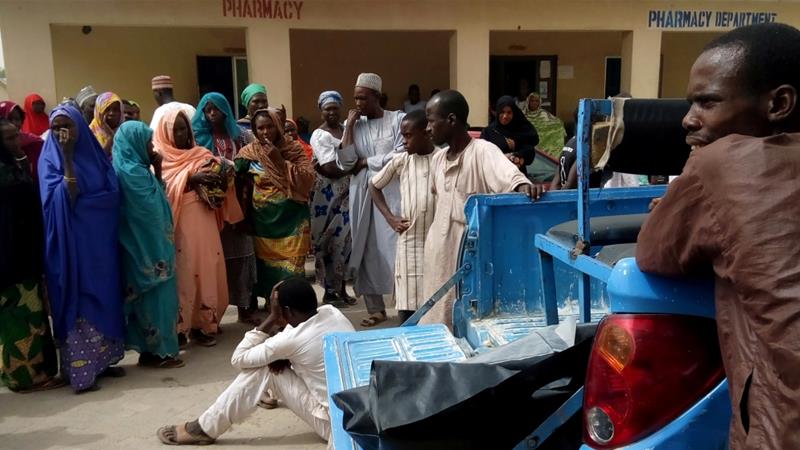 At least 12 civilians have been killed in multiple Boko Haram attacks targeting two villages and a camp for those displaced by fighting in northeastern Nigeria, according to residents and civilian militia.

Boko Haram fighters arrived in seven trucks late on Wednesday and attacked Bulaburin and Kofa villages, as well as a camp in Dalori village outside Maiduguri, the capital of Borno state.

“They killed nine people in Bulaburin, two people in Dalori, and one in Kofa and looted food supplies before setting them on fire,” Kolo said.

“They then moved to nearby Bulaburin where they gunned down nine people and burned the village after stealing food,” Goni told AFP.

“When the Boko Haram gunmen came they stopped on the road overlooking the camp and started firing,” Adamu, who took part in the fight, told AFP.

“Soldiers and civilian JTF (militia) at the gate engaged them in gunfight but were forced to withdraw into the camp because we were outgunned,” he said.

Residents were forced to flee and two were killed while several were wounded, according to Adamu.

The fighters invaded the camp after overrunning troops and the militia and “burned half the camp” by setting fires and firing rocket-propelled grenades on buildings.

“One grenade didn’t explode and is still lying in the camp, waiting for bomb disposal units to evacuate it,” Adamu said.

In a statement, Nigeria’s military said one civilian was found dead after Boko Haram had ransacked Dalori’s market, set buildings on fire and fled when soldiers approached.

The area has been attacked multiple times before by the Boko Haram faction loyal to Abubakar Shekau.

Despite government insistence that Boko Haram is near defeat, northern Nigeria is still beleaguered by heavy fighting.

Since the group launched its campaign in 2009, Boko Haram has killed more than 20,000 people and forced two million others to flee their homes in northeast Nigeria.

Over the years, the armed group – which wants to form a breakaway Islamic state – has kidnapped thousands of adults and children.