Downing Street are considering cutting VAT in a bid to help struggling families battle the cost of living crisis but the Treasury has warned it could fuel inflation.

The proposals to cut VAT from the headline figure of 20 per cent could reduce the tax bill for millions of people across the country and help ease the pressures faced by households as the cost of living crisis continues.

According to the Times, Steve Barclay – the Prime Minister’s chief of staff – suggested reducing the rate on a temporary basis.

However, the newspaper reports that the Treasury has warned the move could end up fuelling inflation by overstimulating the economy.

Inflation, which reached 9.1 per cent last month, is at its highest in four decades, contributing to strikes or threats of industrial action by workers across transport services, schools, postal services and hospitals.

It comes after official figures showed the number of people expected to be subjected to the higher tax bracket will reach 6.1million this year. 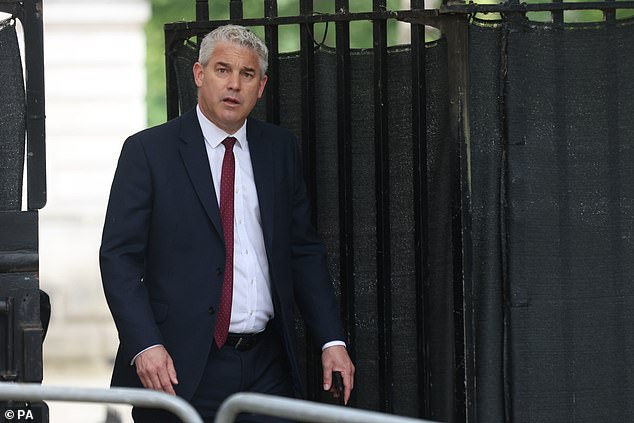 When Boris Johnson won the 2019 general election, some 4.3million people were paying the higher rate.

Experts warned it could hit more than seven million by 2024 – meaning one in five taxpayers would be on higher rates, an increase of around 70 per cent in this Parliament, according to the pension consultancy LCP.

LCP partner Sir Steve Webb, a former pensions minister, said: ‘Paying higher-rate tax used to be reserved for the very wealthiest, but this has changed.

‘People who would not think of themselves as being particularly rich can now easily face an income tax rate of 40 per cent.’

Chancellor Rishi Sunak and Boris Johnson are facing mounting pressure to set out a timetable for tax cuts.

Last year, Mr Sunak froze the top income tax thresholds until 2026 – a move criticised as a pay cut in real terms for millions of families already hit by cost of living increases. 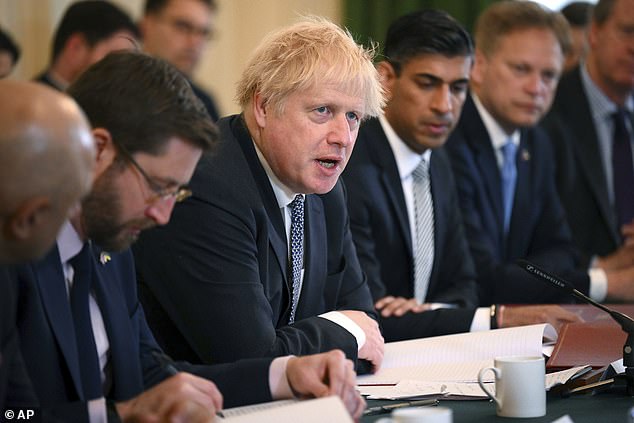 According to the Times, in his letter to party lawmakers on the day of a confidence vote last month, Boris Johnson said energy would be devoted to ‘reducing the biggest single household outgoing of all — the tax bill’.

He added: ‘It must come down, and it will, because that is the best way to deliver the growth we need.’

The number of top earners paying 45 per cent income tax is expected to rise by almost half to 629,000 over the same period.

The tax-free personal allowance is £12,570. The 40 per cent higher rate kicks in on salaries of £50,270 or more, and the additional 45 per cent rate at £150,000. The latest Office for National Statistics figures show that average wage growth was 6.8 per cent year on year. 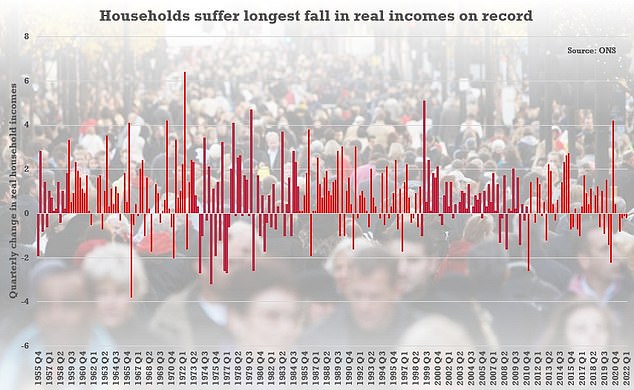 Real household disposable income was down 0.2 per cent between January and March, as income growth of 1.5 per cent was outstripped by household inflation of 1.7 per cent. It is the longest sequence of drops since official figures started being compiled in 1955 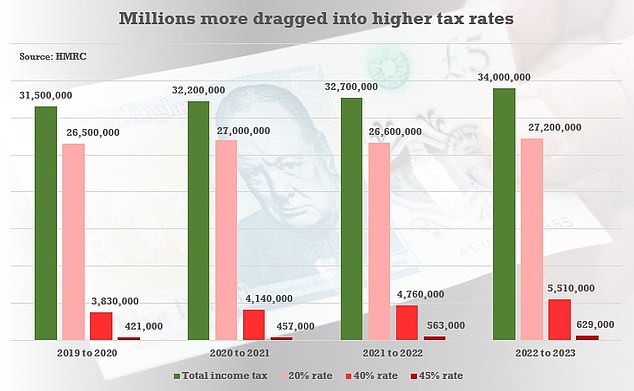 So someone on £47,500 last year would now be tipped into the higher tax bracket, according to calculations by AJ Bell.

Asked if the Government would cut taxes by next year Boris Johnson said: ‘Next month we’ve got a tax cut worth £330 on average for payers of National Insurance coming in. It will be a substantial tax cut.’

But Paul Johnson, of the Institute for Fiscal Studies think-tank, said it was a ‘fairy tale’ to think the Government may cut tax given its spending pressures.

It comes as it was revealed families are officially suffering the worst squeeze on record after real disposable incomes fell for the fourth quarter in a row.

Food tariffs ‘could go to ease cost of living’

Ministers could remove food tariffs to ease the cost-of-living crisis, Boris Johnson suggested today – as the UK was warned to brace for grim times to come.

The PM revealed he has held talks with fellow world leaders on removing trade barries, with oranges and bananas among the produce that could be made cheaper.

The comments, as Mr Johnson attends a NATO summit in Madrid, came as the Bank of England gave a stark warning that the country faces a worse slowdown and higher inflation than other rich countries.

In a bleak assessment, governor Andrew Bailey said the economy was at a ‘turning point’ following its post-Covid recovery as it is battered by a ‘very large national real income shock’.

And he said the Bank stood ready to hike interest rates more aggressively to get inflation under control.

The Bank is tasked with keeping inflation at 2 per cent but prices are now 9.1 per cent higher than a year ago – the biggest increase for 40 years. The headline CPI rate is expected to top 11 per cent by the end of the year.

Finances failed to keep up with soaring inflation once again at the start of the year, making it the longest sequence of drops since official figures started being compiled in 1955.

Real household disposable income was down 0.2 per cent between January and March, as income growth of 1.5 per cent was outstripped by household inflation of 1.7 per cent.

Household finances have now been under pressure for a straight year with costs of energy, food and other goods spiking after Covid and with the Ukraine crisis raging.

Meanwhile, HMRC figures have shown nearly two million people have been dragged into the higher and additional rates of tax over the past three years.

Underlining the burgeoning burden on workers, 6.1million are projected to be paying income tax at 40 per cent or 45 per cent in 2022/23.

Back in 2019/20, the total number of higher rate and additional rate taxpayers combined was approaching 4.3million.

Sir Steve Webb, a former Liberal Democrat pensions minister who is now a partner at consultants LCP (Lane Clark & Peacock) said: ‘Paying higher rate tax used to be reserved for the very wealthiest, but this has changed very dramatically in recent years.

‘The starting point for higher rate tax has not kept pace with rising incomes, and the current five-year freeze on thresholds has turbo-charged this trend.

‘People who would not think of themselves as being particularly rich can now easily face an income tax rate of 40 per cent and around one in five of all taxpayers will soon be in the higher rate bracket.’

The latest figures came as the ONS confirmed its earlier estimation that GDP rose by 0.8 per cent in the first quarter of the year – although it is since believed to have stalled.

This marked a decline in growth from 1.3 per cent in the previous three months, but means GDP remains 0.7 per cent above the last quarter of 2019, before the pandemic struck.