Chester, who was one of only a handful of Coalition MPs to improve their margins at the federal election, told The Age and Sydney Morning Herald on Tuesday that he was still considering whether to enter the race for the Nationals leadership but promised to be a less combative leader and bring a significant change to the top job. 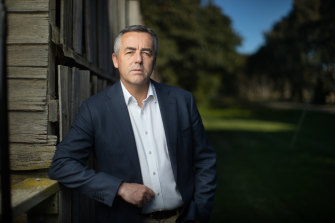 Darren Chester said that as the Nationals’ leader, he would aim to “build consensus” in Canberra.Credit:Simon Schluter

Joyce is expected to face a challenge when Nationals MPs meet in Canberra on Monday.

The National Party held on to all 16 lower house seats in Saturday’s federal election but the Liberal Party lost a string of blue-ribbon electorates as voters turned towards independent candidates who campaigned for more ambitious climate policies.

“I don’t think there’s any doubt whatsoever that the commentary of some of my colleagues, including the leader, hurt the chances of moderate Liberals in suburban areas,” Chester said.

“We have no reason to celebrate the weekend results because instead of being inside the room where big decisions are being made, we are now outside [it].”

Chester said the only way the Coalition could return to government was for the Liberals to retake inner-city seats. “If we want to be in government, our Coalition partners have to win their seats too.”

Several National Party MPs, speaking on the condition of anonymity, told The Age and Herald that deputy leader David Littleproud was also expected to enter the leadership contest and potentially run on a ticket with Chester as his deputy. Littleproud did not return calls from The Age but, in a radio interview, refused to rule out running for leader.

Former Nationals leader Michael McCormack has confirmed that he will also consider a tilt to regain the leadership he lost to Joyce in June 2021, lashing out at Joyce and Senator Matt Canavan over their behaviour during the election campaign. 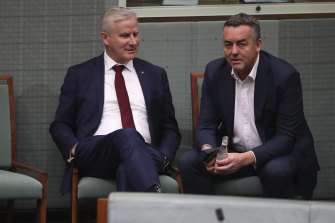 Former Nationals leader Michael McCormack (left) is also considering a tilt at the leadership, which he lost last year.Credit:Alex Ellinghausen

McCormack said Joyce had been weaponised by Labor and independent candidates in blue-ribbon Liberal seats and that Canavan had been “nuts” to declare mid-campaign that the Coalition’s policy to reach net zero greenhouse emissions by 2050 was “dead”.

McCormack said the Nationals were in a “despairing” position now the Coalition was out of government.

“We are a partner in a Coalition that served Australia well. We now find ourselves in a groundbreaking defeat,” he said. “You cannot deliver in opposition, when you are not on the Treasury benches arguing for services for regional people.”

Chester said he will take a few days to decide whether to contest the leadership but outlined his vision for the party, promising to “build consensus” in Canberra. He said he had already reached out to new Prime Minister Anthony Albanese offering to keep him informed on regional issues given Labor’s low number of rural seats.

“If I were to run, and I was successful, it would be a significant change in leadership style,” Chester said.

“I wouldn’t approach the role in the same way I have approached my position in Gippsland, and that is to put forward a positive and constructive agenda for the future of regional Australia rather than seeking to divide our communities.”

Chester said that if he was elected leader, Joyce would remain on the frontbench.

A source close to Joyce said while he was expecting a challenge from Chester next week, he was confident the Victorian would be “overwhelmingly rejected” by the party room.

“I think he would get a maximum of six votes,” the source said. “I don’t think he has Buckley’s [chance].”

A group of 21 or 22 party room members will choose the next Nationals leader.

On Tuesday, Joyce continued to rebuff criticism that his comments surrounding the net zero emissions target had harmed the Liberal Party. He also refused to rule out a Coalition split but said his preference was to continue the partnership with the Liberals.