NORTH Korea is expected to hold its largest ever military parade tomorrow during which it may unveil new nuclear weapons.

Kim Jong-un’s army will goose-step en masse to mark the 75th anniversary of the founding of the North Korea’s ruling Communist Party. 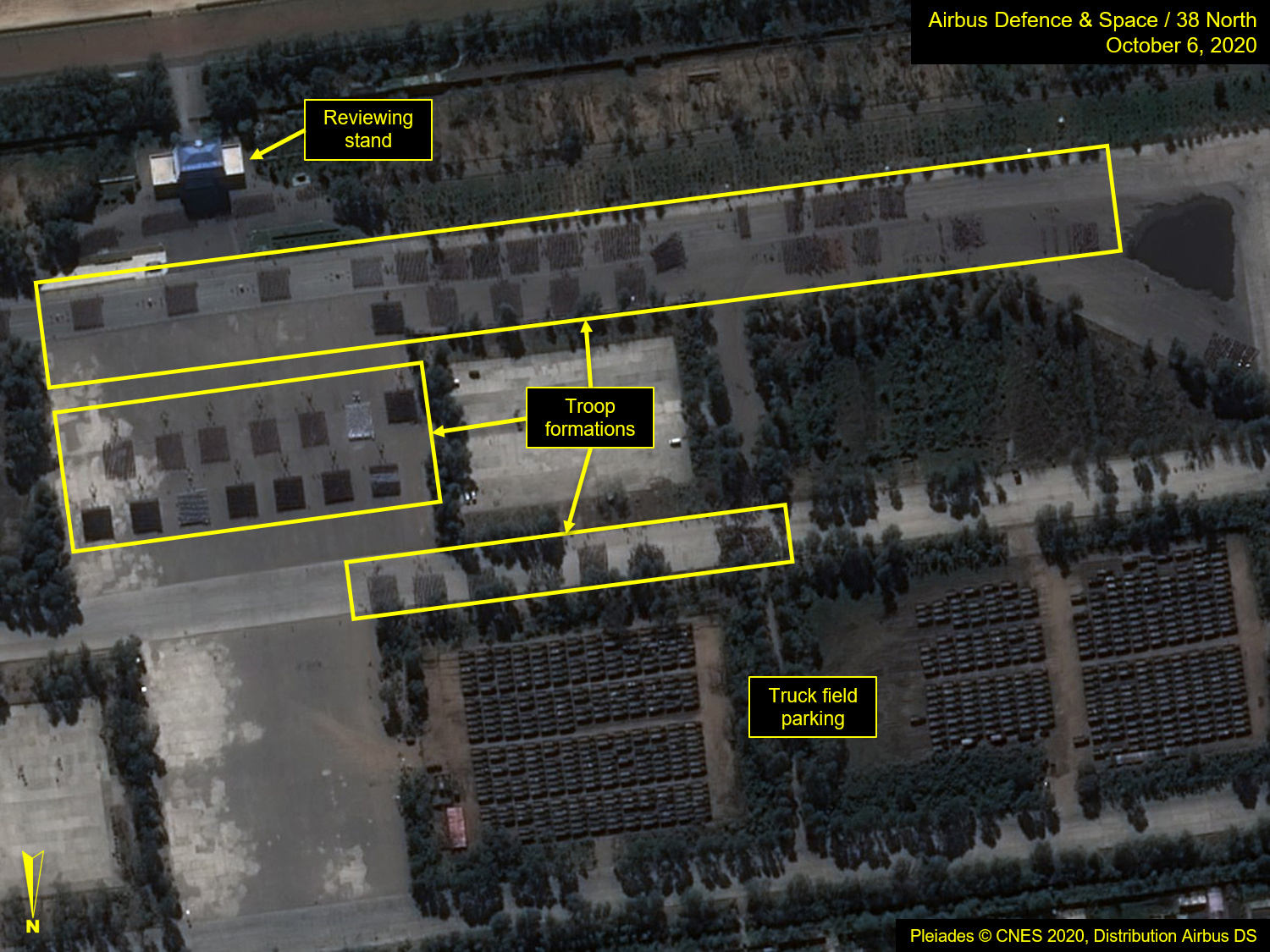 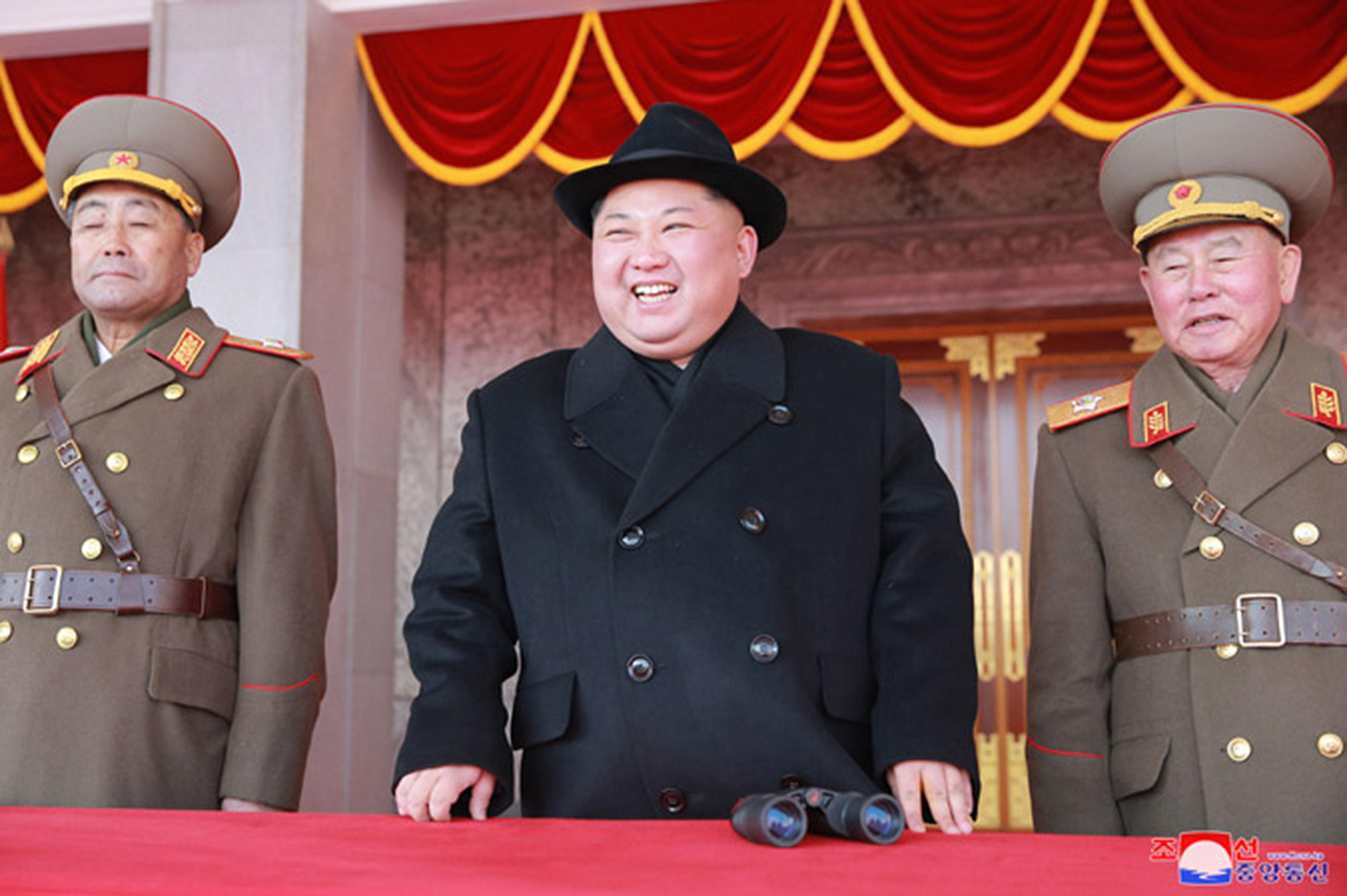 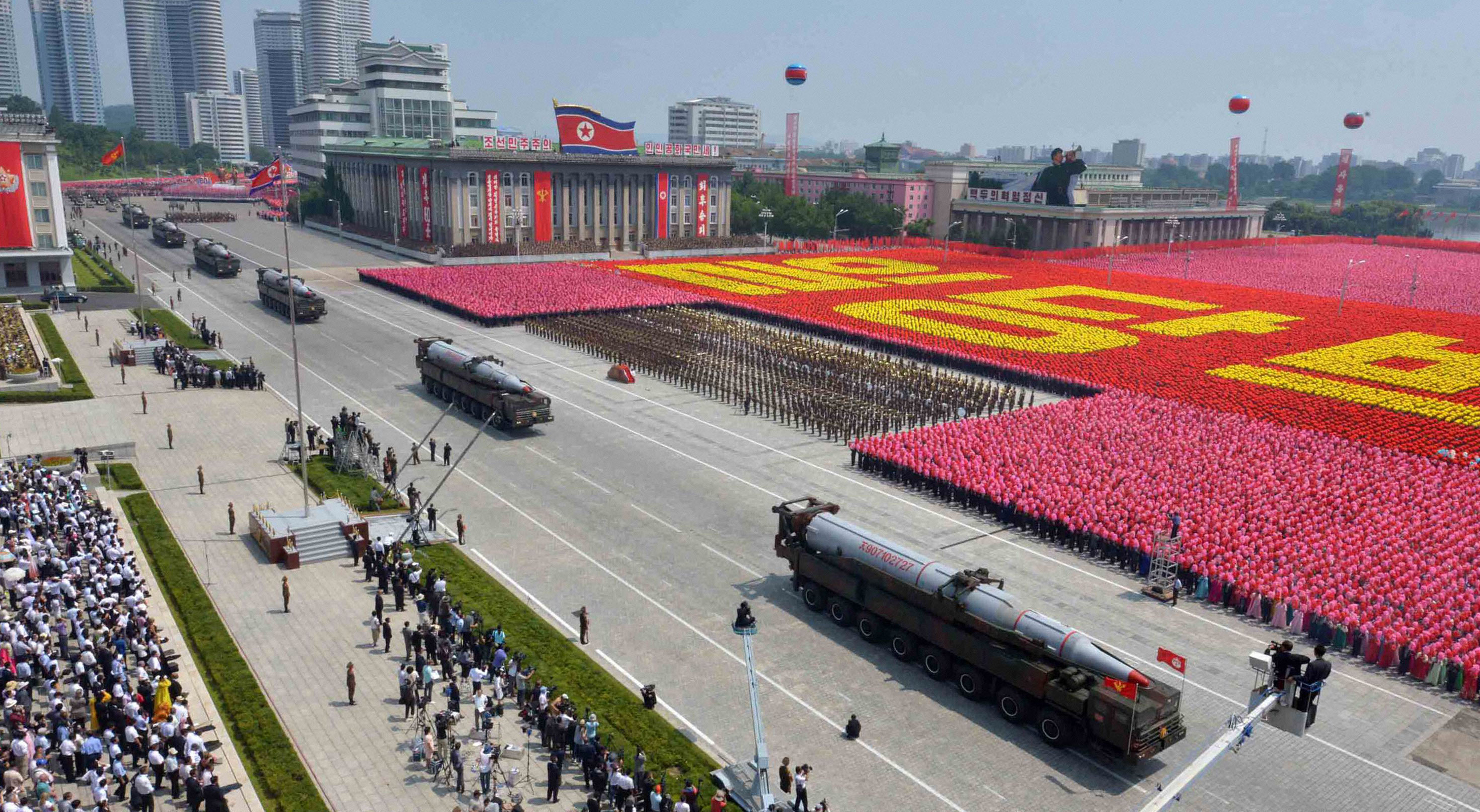 Satellite pictures show massive preparations are still ongoing, with formations of thousands of troops preparing to march through Pyongyang.

It comes as The Sun Online revealed experts believe North Korea may use the event to unveil a new nuclear missile.

South Korea and US intelligence have reportedly warned a missile "larger" than the Kim's biggest nuke has been spotted being moved near Pyongyang.

Kim may also use the parade as a chance to throw down the gauntlet to either Donald Trump or Joe Biden ahead of the US election on November 3.

North Korea watchers 38North have spotted some 40 formations of troops practicing in a replica on Pyongyang's Kim Il Sung Square.

Some 69 coaches along with other trucks and vehicles have also been spotted parked up amid the preparations.

Vehicle netting to camouflage any movements can be seen strung between garages, and a fleet of trucks can be seen nearby parked up.

Roads also appear to be closed off as thousands of people can be spotted moving around the parade route which has been sealed for security reasons.

Kim is expected to attend Saturday's events along with other senior members of the Communist Party.

Work is finished on a lavish viewing stand for VIPs, and it also appears North Korean builders have completed construction on Pyongyang General Hospital.

38North have describe the medical centre as "one of the main propaganda pillars" for the weekend's festivities as it was built in just 200 days. 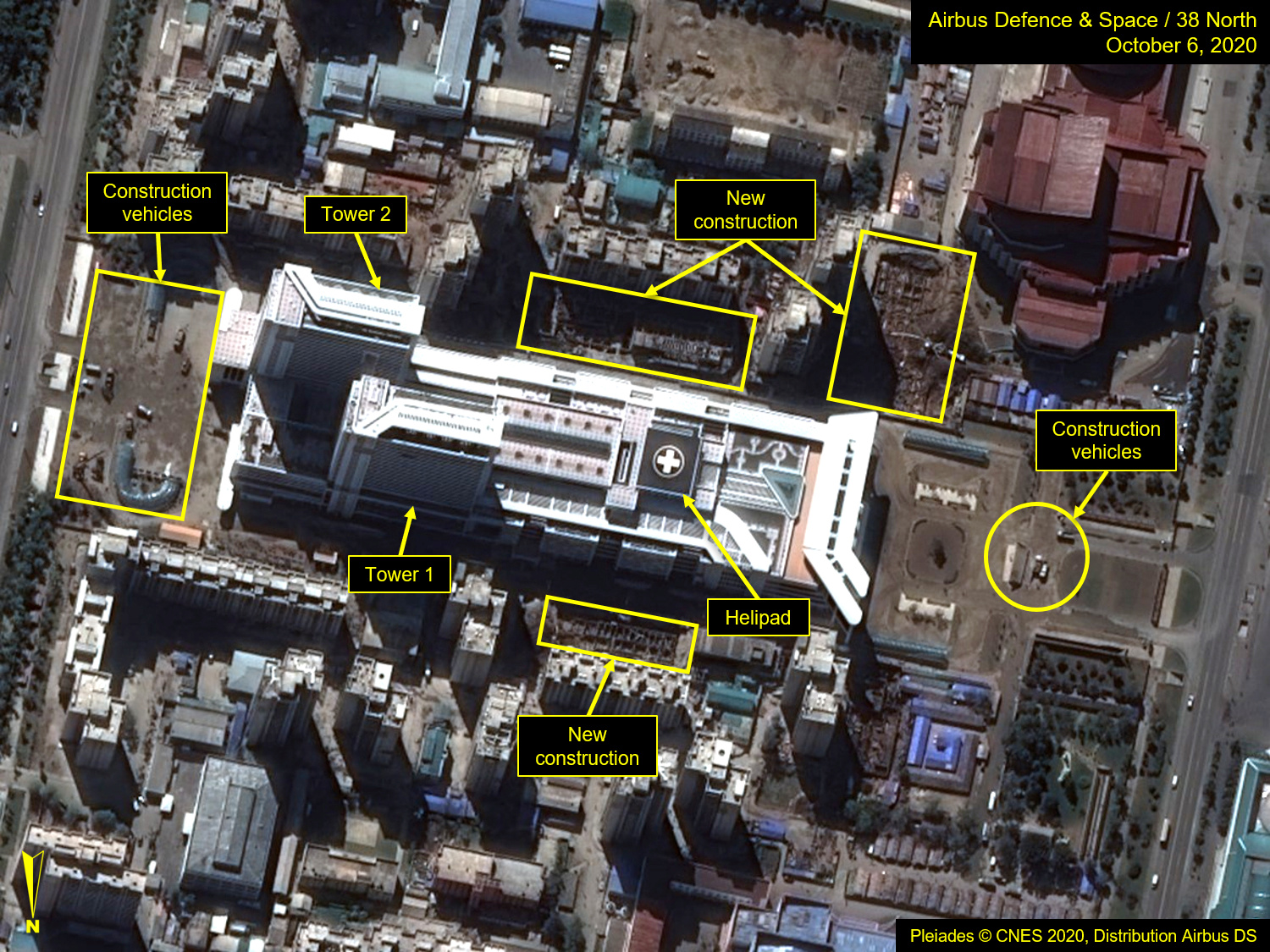 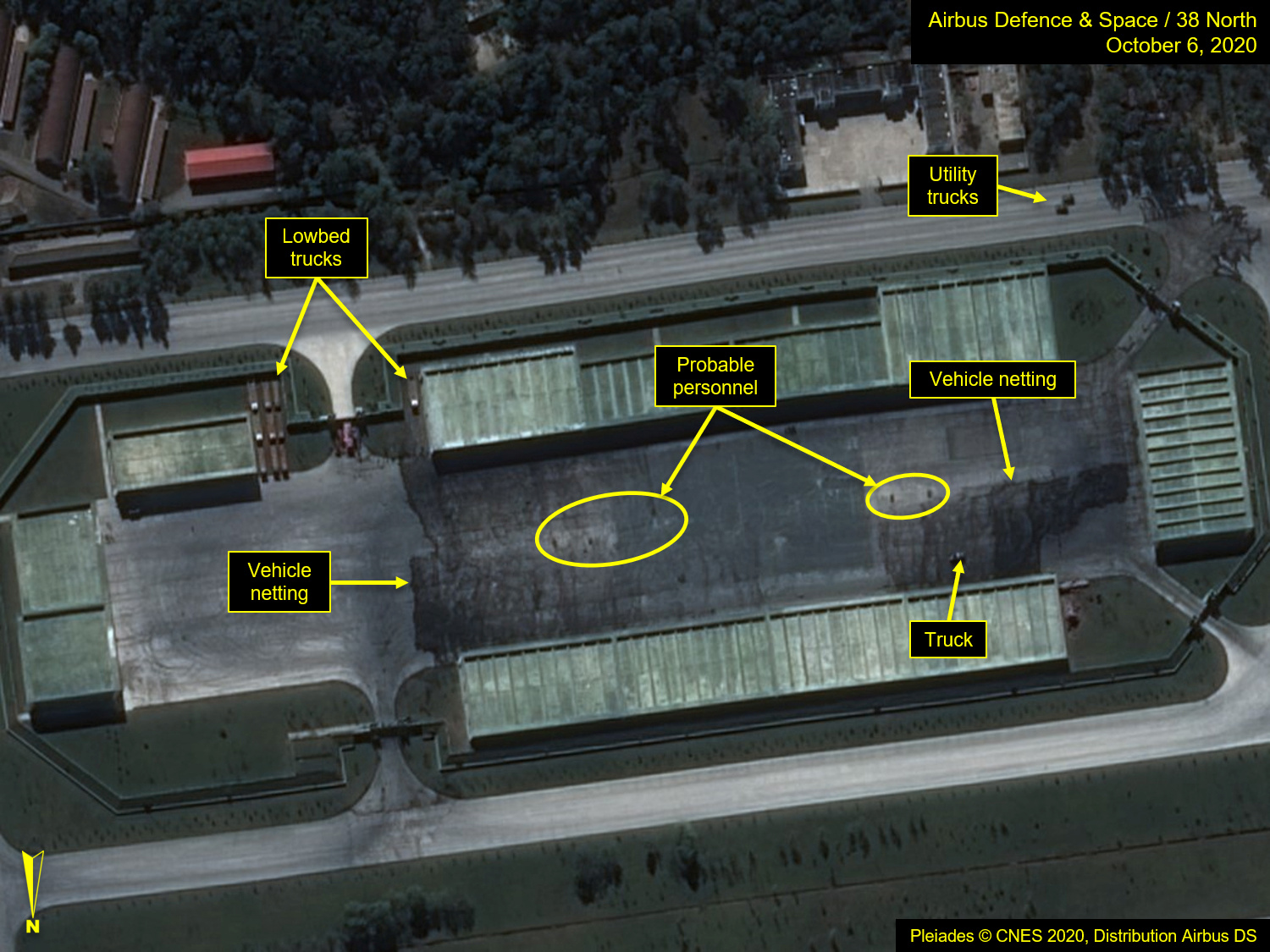 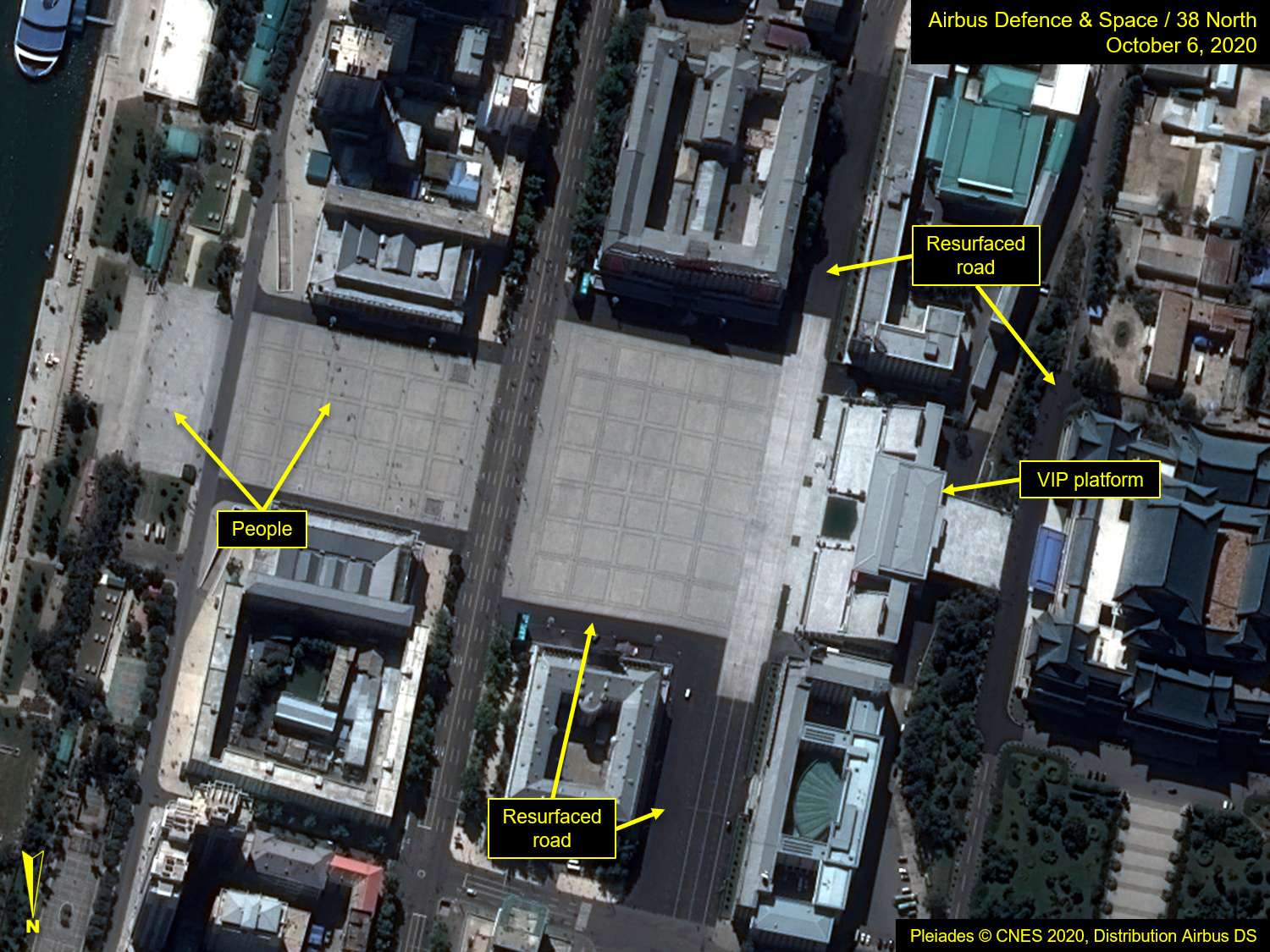 However, the experts note it is unclear if the hospital is completely finished as there have been no pictures of the interior – meaning it could just be a shell.

The new hospital comes as Kim has boasted about his handling of the coronavirus pandemic while North Korea still claims it has seen zero cases.

However, it has also been warned the massive parade could be a "super spreader" event for an Covid-19 outbreak.

He said: "I think they will unveil something new, intelligence tells us that it probably will be an ICBM."

The expert described now as the "perfect time" for North Korea to reveal the new weapon.

He said it will allow them to capitalise on the 75th anniversary, to make good on promises of a "surprise", and to distract from the country's dire domestic situation. 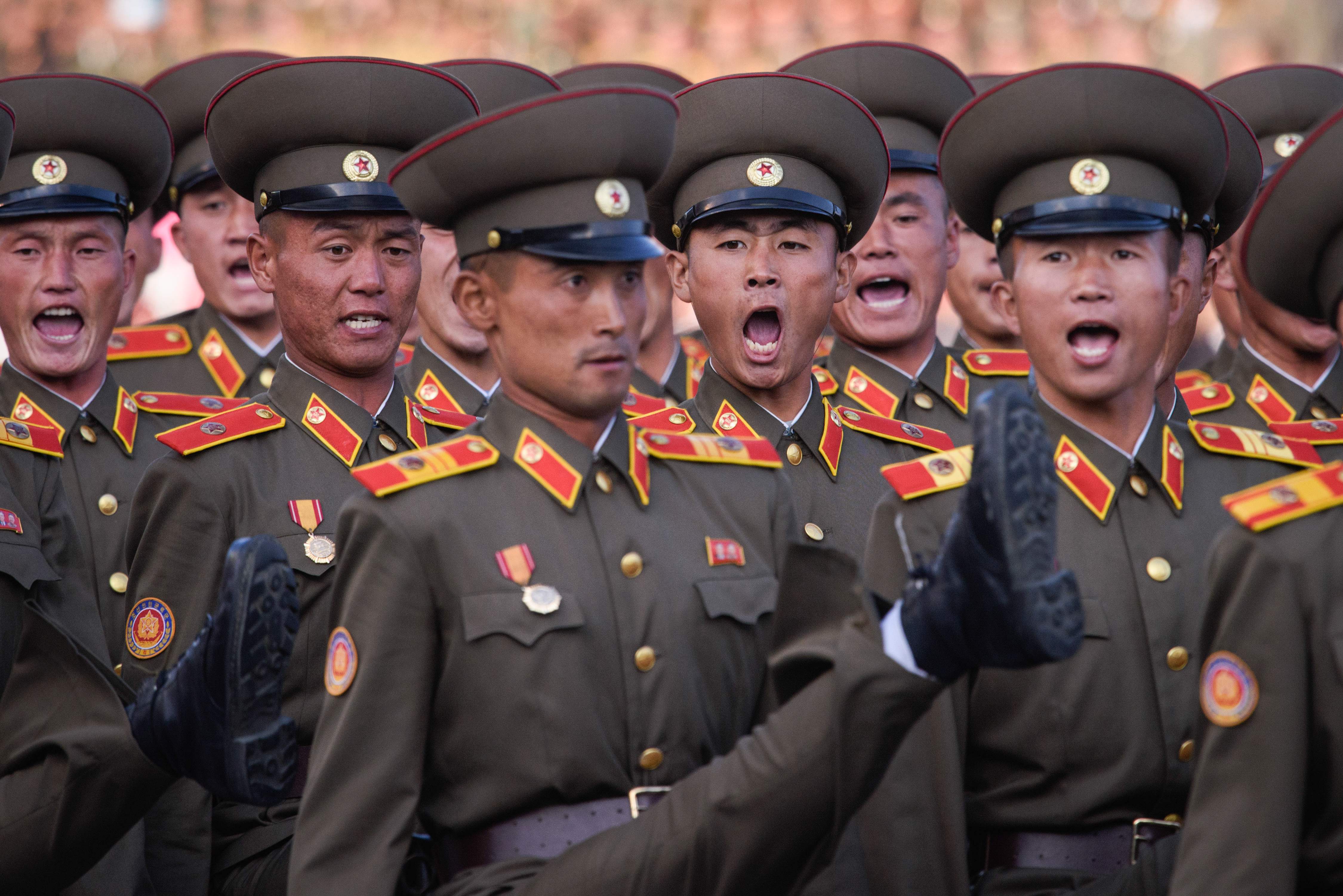 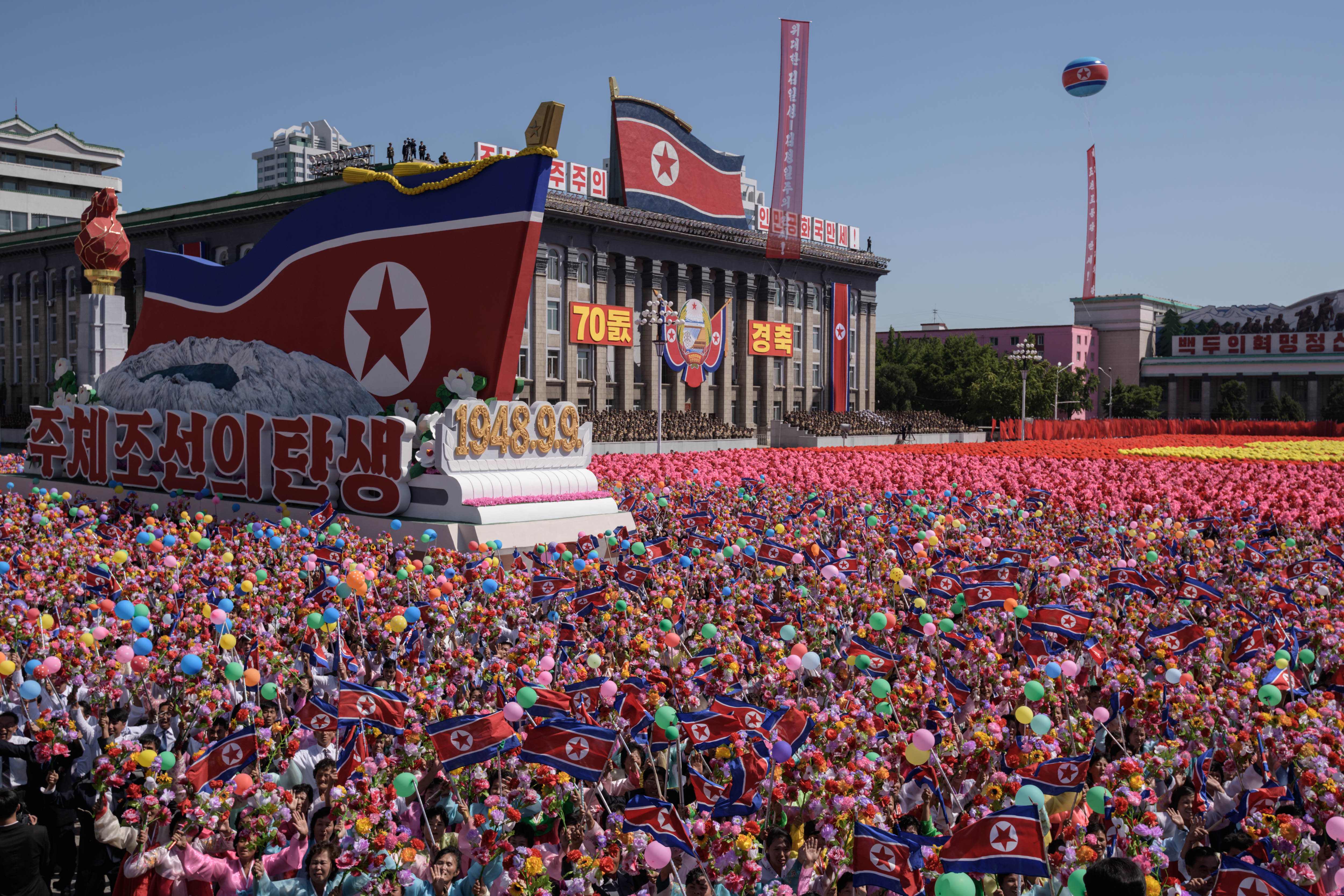 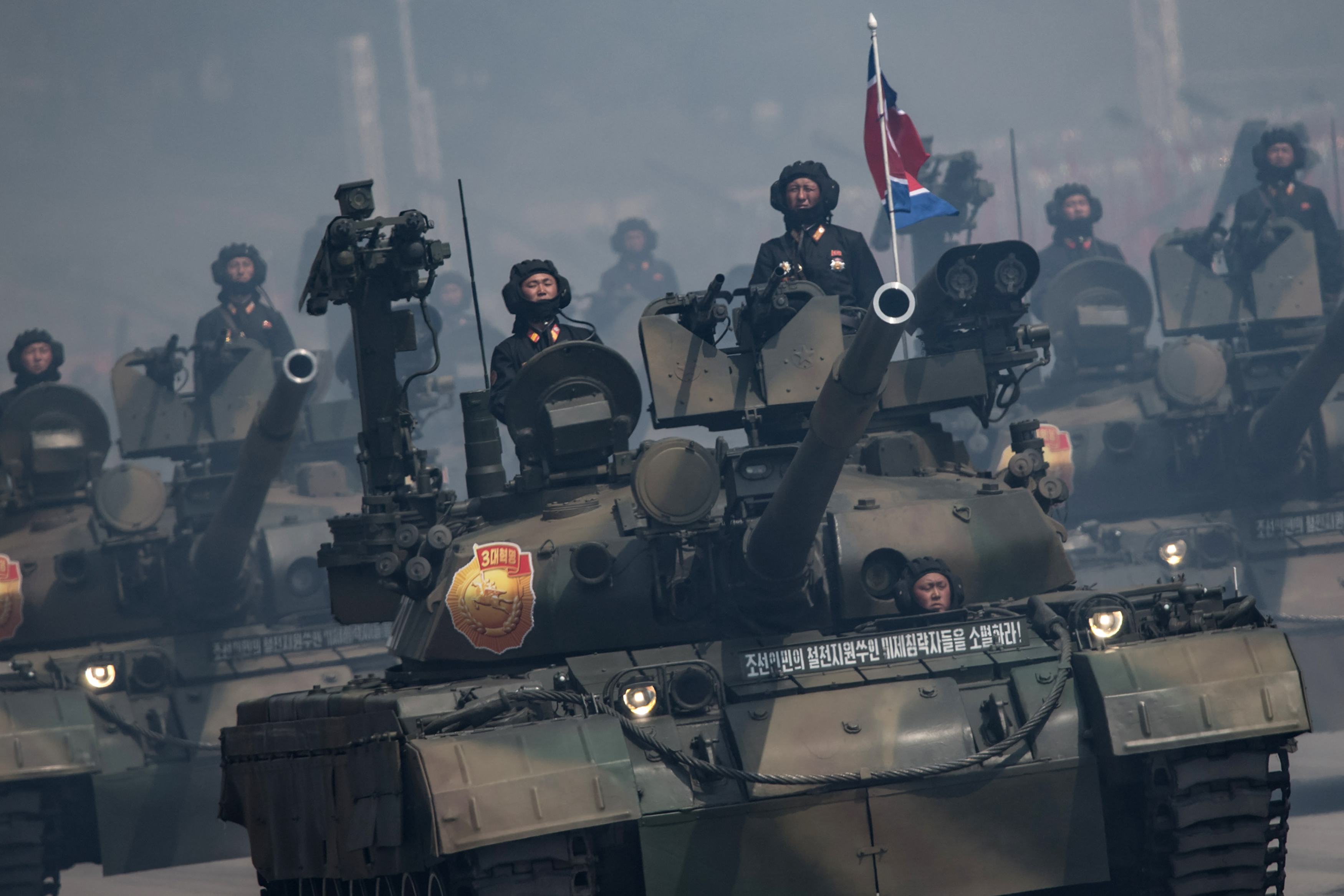 North Korean state media had called for "scientists and technicians to glorify the great October festival" with a breakthrough in "field of national defence" back in February.

Satellite pictures have previously shown what is believed to be a missile carrying vehicles at the Mirim Parade Training Ground outside Pyongyang ahead of Saturday.

Kim also vowed at the start of the year to unveil a new unspecified "strategic weapon" and cryptically promised a "gift" last December.

Edward Howell, a researcher in International Relations at the University of Oxford, suggested previous plans by North Korea for a new weapon may have been put on hold due to the coronavirus pandemic.

But Mr Howell said the world still may see a new weapon on Saturday, however added that Kim may wait until after the US election.

Tom Plant, director of proliferation and nuclear policy at the Royal United Services Institute, told The Sun Online he expects North Korea to unveil a new weapons system soon – but said it may not be on Saturday.

He said: "North Korea has a pretty good heritage of giving the incoming US President something to think about so it pushes them up the agenda.

"Whether they do that now, or they until November – who knows." 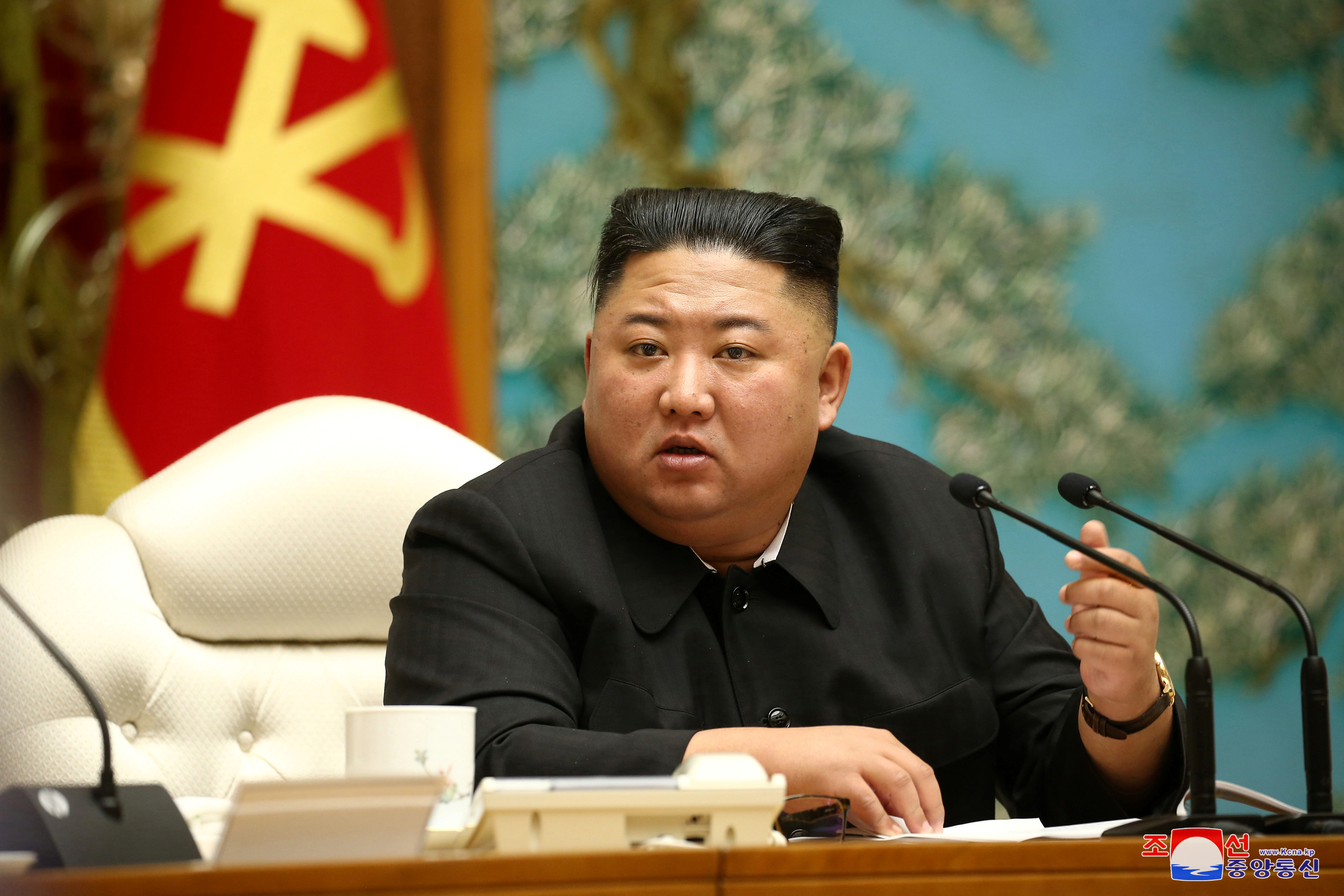 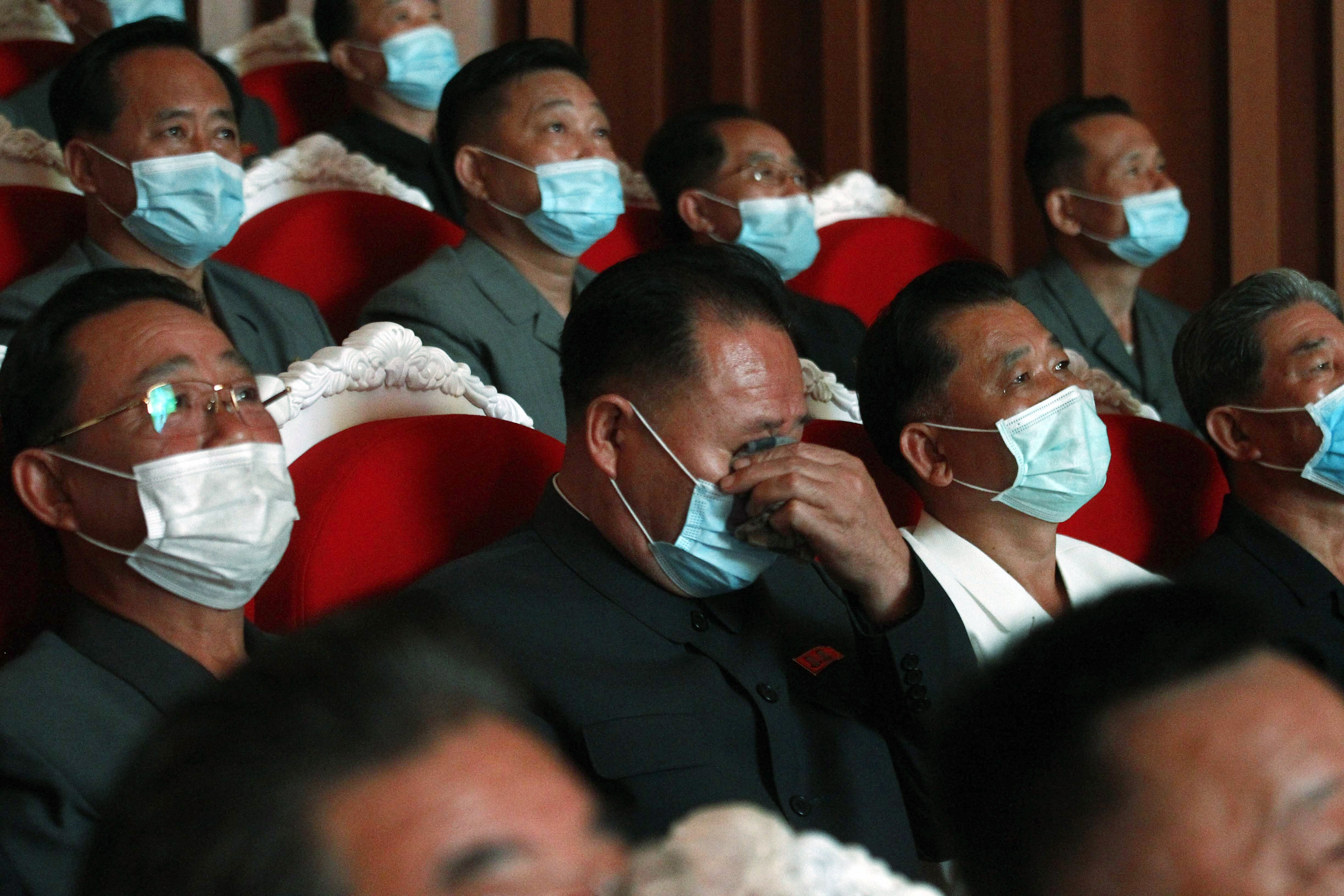 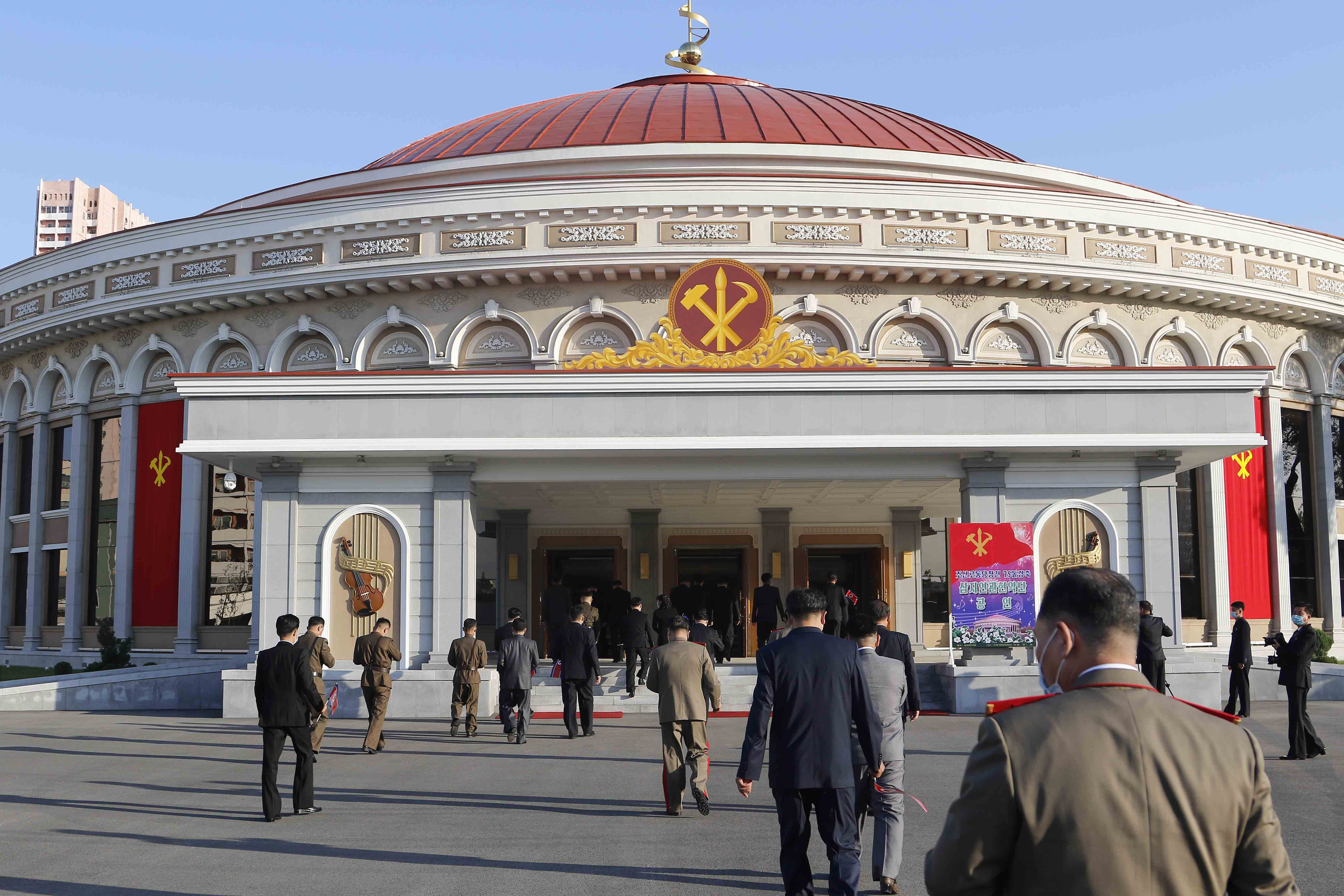 Harry Kazianis, a North Korea expert at the Centre for the National Interest, warned there was a risk of coronavirus spreading at such a large parade.

"Such an event is extremely risky in that if only a few people were Covid-19 positive in the crowd they could create a deadly super-spreader-like event—putting potentially thousands of people at risk for infection," he told Express.co.uk.

He added: "I would argue this parade is a big mistake on the part of the Kim regime and could come back to haunt them unless extreme precautions are used.

"However, as is the nature of a parade to demonstrate military might to the entire world, that seems pretty unlikely. Clearly, masks and missiles don’t mix."

North Korea is notoriously secretive but it is believed the regime is being stretched to the brink despite preparing to show off its military on Saturday.

Floods have combined with the coronavirus pandemic, the ongoing famine, and a buckling economy amid heavy trade sanctions.

It is believed some 60 per cent of North Koreans, around 15million people, live in absolutely poverty, according to a recent study by Vienna University.

Its GDP per capita is estimated to be around $790 – while in the UK it is around $41k – despite the extraordinary wealth of Kim and the country's elite.