Hong Kong: Hong Kong’s embattled chief executive, Carrie Lam, said it was her government’s decision, and not Beijing’s, to respond to a single protester demand and withdraw the extradition bill.

Fronting the media on Thursday, Lam repeated many of the points she had made when announcing the formal withdrawal of the bill in a pre-recorded televised address the night before. The withdrawal would be formally announced in the Legislative Council by the security minister when the legislature resumed in October and would not require a vote, she said. 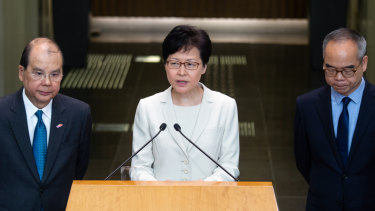 The decision to withdraw the bill was not a change of mind because she had already pronounced it “dead”, she said. The central government in Beijing supported her decisions in handling the crisis, she said.

But Lam said she did not agree to another key protester demand – establishing an independent inquiry into police conduct. She continued to insist the matter be dealt with by an existing police oversight body and denied the watchdog was pro-government.

She said her plan would include holding dialogue with community leaders and had “one purpose – to find a way to break the impasse in Hong Kong, but it needs citizen’s cooperation”.

Lam said police would continue to take action against protesters to “stop violence”.

The withdrawal announcement came after 13 weeks of protests that have grown increasingly violent, and amid speculation she is preparing to introduce emergency laws.

Overnight petrol bombs were thrown at the gate of the home of Jimmy Lai, the media tycoon who has been repeatedly attacked by Beijing state media as a “black hand” behind the protests.

Prince Charles left royal fans shocked and marvelled by his commitment to his patronages and charities after Clarence House issued an update on Twitter. The…

The US coronavirus death toll could reach 100,000 to 240,000 even if social distancing guidelines are maintained, the White House projected Tuesday, as President Trump…

SINGAPORE – Individuals can apply to their banks and insurers to defer repayment of property loans, as well as premium payments for life and health…