There is no constitutional crisis. Don’t even bother mentioning the R-word.

Looking regally down from above the terracotta fireplace, Her Majesty, like her great-great-grandmother, would likely not have been amused. Actually, the word Daniel Lahood uses is “disappointed”. 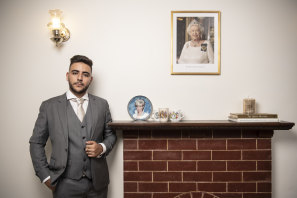 Young monarchist Daniel Lahood, 20, at his home in Ashbury.Credit:Wolter Peeters

Australians are looking to the historic Oprah Winfrey interview of Prince Harry and his wife Meghan to interpret what it means for the nation’s future. Monarchists believe the country will have even more respect for the Queen, while republicans argue it proves the institution does not fit with modern Australia.

Mr Lahood, 20, is Inner West Council’s 2020 Young Citizen of the Year. He is a second year UTS law student and is a passionate advocate for social justice. He is also an ambassador for Australians for a Constitutional Monarchy.

“I was very disappointed,” Mr Lahood said. “As a royalist, I was hearing stuff that didn’t add up.”

What of the claims that a member of ‘The Firm’ (apparently not the Queen or the Duke of Edinburgh) asked about how dark the skin of Meghan’s baby would be? “It’s a family issue. We haven’t heard the other side of the story. If that was said, obviously it’s not the right thing to say, but we all say stuff sometimes we don’t mean or that comes out the wrong way. There’s always another side to the story.” 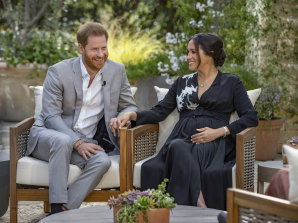 Prince Harry, left, and Meghan, Duchess of Sussex during the controversial interview. Credit:AP

Did it give any fuel to the argument that Australia should be a republic? “No. I think it has given Australians more respect for the Queen.”

And the future for Harry and Meghan? “I think it comes to the point of no return. Once members betray the family it is hard to come back. Once you overstep that mark there is no coming back. Family issues should stay in the family.”

Andrew Fraser, who is a member of the national executive of the Australian Republic Movement, said it seemed strange “that this guy’s [Harry’s] grandmother is Australia’s head of state.” 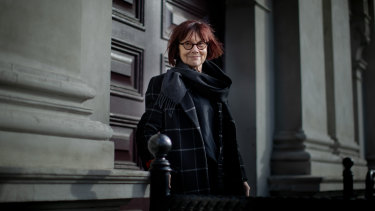 “A lot of people have been asking what characteristics the baby would have but it wasn’t meant in a racist manner.”

He added: “It’s been taken out of context. A lot of Australians have more or less written Harry and Meghan off. People see it for what it is.”

Jenny Hocking, author last year of The Palace Letters into the dismissal of Gough Whitlam, is also on the national executive of the Australian Republic Movement and regards the interview as an “eye-opener”.

“I know through my court case, it took a High Court action to prise the royal grip off letters in our own archive, it is very, very difficult to break through royal secrecy and to get to really see what happens behind that sort of veneer.”

Of the racism element, she said: “It is clearly a view that was conveyed to Harry and Meghan and a very distressing one and I think that is enormously damaging. The stark failure to respond appropriately to a clear mental health issue and a cry for help, I think that also is deeply damaging.

“This highlights the fact that it is quite absurd having a foreign monarch as Australia’s head of state that is very much out of touch with modern Australia and also modern notions of democratic accountability and transparency.”