A bull rider has been awarded almost $300,000 in damages after a judge found a high-powered fellow member of the rodeo community implied on social media he was a “kid killer”.

Matthew Doak, a bull breeder and rider from the Central Tablelands, filed the civil matter in the NSW District Court earlier this year against Joshua Birks over posts about an incident at a rodeo in the state’s west in March.

During the Coonabarabran rodeo, which was run by the Australian Bushmen’s Campdraft and Rodeo Association (ABCRA), a boy aged about 12 was thrown from a bull in a junior competition. The boy suffered mild injuries, but was not taken to hospital and was back riding bulls within a week. 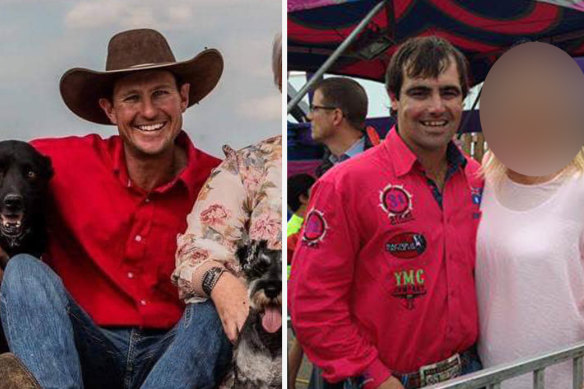 The two bull riders at the centre of the defamation proceedings, Matthew Doak (left) and Josh Birks (right), have known each other for more than 15 years and first met as juniors.Credit:Facebook

Doak’s company had supplied the mini bulls, which are specifically bred to train junior rodeo riders.

In the days after the rodeo, Birks posted a seven-second video of the boy falling off the bull on Facebook along with the caption: “Not my bull not my kid but I think the rest of you will understand why it’s been put up!!!! Feel free to send Matthew Doak a message and give him a peace (sic) of your mind. [But keep in mind] you can’t teach STUPID!!!!”

This video received 163 likes, 204 comments and nine shares on Facebook.

In another post, Birks wrote: “I’m sure something will be done, or we won’t have any kids here in 5 years. We don’t got (sic) enough now let alone killing them off now.”

In the judgment handed down on Monday, District Court judge Judith Gibson ruled Birks implied Doak was recklessly endangering children by providing bulls “too dangerous for the children to ride”.

The judge ruled Birks responsible for not just his two posts, but also 13 defamatory responses to his posts made by other users. Multiple comments made by the other users also described Doak or his bulls as “kid killers”.

The judge’s decision to rule Birks responsible for the defamatory comments of others – as well as his own posts – comes after a landmark High Court ruling in 2021.

Former juvenile detainee Dylan Voller settled a case against three media outlets, including this masthead, which ruled publishers could be held liable for defamatory comments on their social media pages.

In Monday’s outcome, Doak was awarded just over $283,000 in damages. In assessing the figure, Gibson said Birks’ comments held significant weight and labelled him a “household name” within the Australian rodeo community, having success in both domestic and international competitions.

Gibson said Doak became the subject of harmful comments because of the posts. In one case a stranger came up to him at a rodeo and said “don’t go killing any kids this week” while another in November said words to the effect of “what kid killers did you bring this weekend?”

Gibson also ruled Doak had suffered significant damage to his business Doak Bucking Bulls and had not received any invitations from ABCRA since the Facebook posts were made.

The court heard Doak now had to travel to Queensland – five to six hours from his home – because of the damage to his reputation in his own state.

“He has not been invited to any of their rodeos or to tender as a stock contractor for any of [ABCRA] events. This is unusual, in that, in his experience, he would normally attend about 10 such functions each year,” the judgment stated.