NSW has reported 1281 new local coronavirus cases on Monday, as Premier Gladys Berejiklian revealed modelling which showed infections in NSW were set to hit a peak “in the next week or so”.

The Premier said the modelling, informed by the work of the Burnet Institute, also showed the state would require its highest number of intensive care beds in early October. 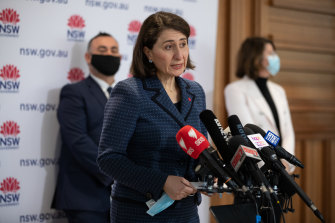 “I do want to qualify that to say that modelling depends on a number of things; a number of variables,” the Premier said.

“If too many of us do the wrong thing, there are too many superspreading events, we could see those numbers higher.”

Within the areas of concern, NSW Health is expecting it will record cases of 1100 to 2000 a day until mid-September.

Dr Nhi Nguyen, clinical director of the Intensive Care Network NSW and physician at Nepean Hospital said clinicians have been on a “journey” since the start of the pandemic in early 2020.

“You would have heard well reported that we were aiming for the 2000 ICU beds [at that time] … and we breathed a sigh of relief in April, where we reached the maximum number of 50 patients in intensive care, and only 20 of them were ventilated,” she said.

Today, there are 1071 COVID-19 cases admitted to hospital, with 177 people in intensive care, 67 of whom require ventilation.

Dr Nguyen said workforce will “continue to be our biggest challenge”, noting registers have been established to call people back to the intensive care workforce and colleagues in operating theatres, emergency and coronary care are being brought into the field due to their corresponding skills.

She said the system would need to work differently to cope.

“When you hear stories of patients needing to be diverted elsewhere … that is actually a sign that system is working,” she said.

“The system is working because it is recognition that to provide the best and timely care for those patients is actually not at an ambulance, you know, in the driveway of an ED, it may be that it is to divert across the city.”

The federal government opened 10 new mental health clinics across Greater Sydney on Monday, as the region enters its 11th week of lockdown.

The clinics, located in Lakemba, Hurstville, Kingswood, Thornleigh, Blacktown, Parramatta, Bankstown and Liverpool, as well as Shellharbour and Tuggerah, come a year after 15 HeadtoHelp clinics were opened in Victoria to provide mental health support during the state’s long second lockdown.

“The current lockdown is also having a huge impact on students preparing for their HSC,” he said. “The clinics will provide vital access for year 11 and 12 students who are facing their final years of schooling and may need additional mental health support.”

Data released by the federal government at the end of last week showed aged care staff testing positive to COVID-19 in Sydney and regional NSW facilities had largely not passed it on to residents.

Twenty-seven aged care facilities in the state currently have positive cases, although only nine of the outbreaks involved residents.

Advantage Care Prestons Lodge, in south-west Sydney, had 12 residents test positive last week – there were 16 active resident cases at the facility on Friday, up from four the week before. Two additional staff have also tested positive.

Australia’s former deputy chief medical officer Nick Coatsworth told 2GB earlier on Monday morning the country was at a turning point where it could “gently take the foot of the accelerator with restrictions” as vaccination rates improve.

Dr Coatsworth also said the arrival of summer would reduce the risk of transmission as COVID-19 spreads less in warmer weather.

“We still need to keep an eye on the restrictions we’ve got in place [but] for our mental health, for our physical health, we need to [get] outdoors,” he said. “I think we are at a policy turning point, and the Australian community will realise that, with vaccination rates coming up.”

There were 246 new local cases reported in Victoria on Monday, including 125 without a known source.