NSW has reported 594 new local coronavirus cases, as daily infections in the state continue to decline.

A man in his 60s and two men in their 80s have died after acquiring their infections at the Allity Beechwood aged care facility at Revesby. 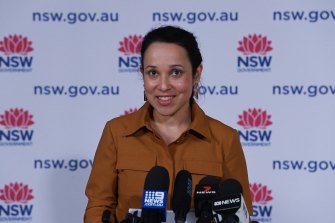 Another man in his 70s who died at Westmead Hospital was the second resident of Northcourt aged care facility at North Parramatta to die in its outbreak.

One of the reported deaths was receiving care at the Alfred Hospital in Melbourne. She had been transferred there after acquiring her infection in the Edward River region, where she lived, in the south of NSW.

Dr Gale said the ministry was “really pleased to see the case numbers stabilising and going down” but warned people would need to continue to exercise caution when the state reopens next week.

“This is really important to make sure that the gains that we’ve made in these difficult months are retained into the future,” she said.

The state’s new premier, Dominic Perrottet, met with health experts for the first time on Wednesday.

Before the meeting, Mr Perrottet told Ben Fordham on 2GB he had a “very constructive discussion” with Health Minister Brad Hazzard after his swearing-in ceremony on Tuesday.

The newly elected Liberal leader said there were a number of issues he wanted to raise, including people visiting sick and dying loved ones.

While palliative care and end of life visits are allowed under the restrictions governing aged care facilities, in hospitals these decisions are made on a case-by-case basis.

Last month, a NSW Health spokesperson said these visits were accommodated in hospitals “wherever possible” but the decision was made locally at individual facilities.

“NSW hospitals will return to normal visiting arrangements as soon as it’s safe to do so,” the spokesperson said.

Asked about compulsory mask-wearing in offices, scheduled to remain in place until December 1, Mr Perrottet said there was no doubt the requirement was an “impediment” on people returning to the Sydney and Parramatta CBDs, but he did not want to pre-empt any decisions ahead of the state’s crisis cabinet meeting later on Wednesday.

“There’s a number of issues that I want to raise with our health officials this morning; whatever we do, we want to make sure it’s done in a way that keeps people safe,” Mr Perrottet said.

Mr Perrottet said he expects the state to bounce back quickly, given built-up demand heading into December and summer, and a “strong economy out the other side”, with an economic recovery plan to be announced in the next couple of weeks.

There were 1420 new local cases reported in Victoria on Wednesday and 11 deaths. Dozens of cases in the state have now been linked to the state’s construction industry protests held last month.