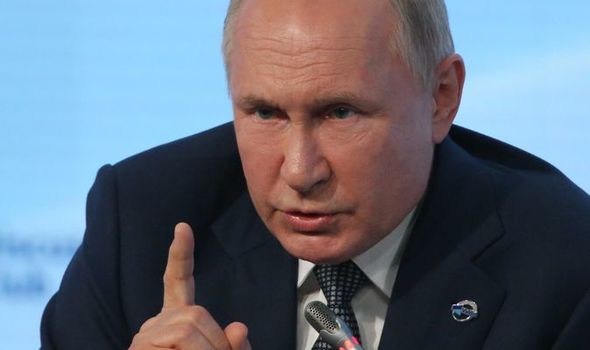 Tensions between Moscow and Kiev reached boiling point earlier this year after Russia massed more troops near the contested borders. Since 2014, more than 14,000 people have been killed in the conflict in eastern Ukraine.

In September, Ukrainian President Volodymyr Zelenskiy warned an all-out war with Russia could be a “possibility”.

Speaking at the Yalta European Strategy (YES) summit, Mr Zelenskiy said: “I think there can be.

“It’s the worst thing that could happen, but unfortunately there is that possibility.”

Now, Russia’s deputy foreign minister, Sergei Ryabkov, has warned if tensions between Moscow and Ukraine continue to rise, there could be a repeat of the Cuban missile crisis.

He said: “You know, it really could come to that.

“If things continue as they are, it is entirely possible by the logic of events to suddenly wake up and see yourself in something similar.”

His comments come just hours after Moscow accused Ukraine of moving heavy artillery towards the front line of fighting with pro-Russian separatists and failing to engage in a peace process.

Kyiv denied Russian accusations that it plans to seize back territory by force and Mr Zelenskiy said this week that he was hopeful of reaching a new ceasefire deal.

Mr Putin said talk of an invasion is “provocative” and accused Ukraine and NATO of fanning tensions.

The head of the Russian armed forces, Valery Gerasimov, was quoted by Russian news agencies as telling foreign military attaches that the situation in eastern Ukraine was escalating and Kyiv was to blame.

He said: “Deliveries of helicopters, unmanned aerial vehicles and airplanes to Ukraine are pushing the Ukrainian authorities to take sharp and dangerous steps.

“Any provocations of the Ukrainian authorities by way of a forced settlement of the problems of Donbass will be suppressed.”

On Thursday, US President Joe Biden and his Russian counterpart, Vladimir Putin, went head to head in a video call as the relationship between the two nations began to sour.

After the call the 46th US president said: “I made it very clear, if in fact [Putin] invades Ukraine, there will be severe consequences.

Mr Biden also stated the US would increase American presence in NATO countries.

He continued: “In addition to that, I made it clear that we would provide the defensive capability to the Ukrainians as well.”

Mr Biden is believed to have said the US would also “provide additional defensive material to the Ukrainians … and we would fortify our NATO allies on the eastern flank with additional capabilities in response to such an escalation”.

US National Security Adviser Jake Sullivan suggested this could include additional deployments of US troops to eastern European NATO allies, he added after the two-hour meeting.

Implementing sanctions have also been discussed as a measure.

The Cuban missile crisis was a one-month, four-day confrontation between the United States and the Soviet Union.

Despite the short time frame, the Cuban Missile Crisis remains a defining moment in US national security and nuclear war preparation.

The confrontation is often considered the closest the Cold War came to escalating into a full-scale nuclear war.