'We will be back': National leader

"Three years will be gone in the blink of an eye," National leader Judith Collins said. "And I say to everybody, we will be back."

"Tonight is the start of the next campaign, bring on 2023," she concluded.

As she leaves the stage, supporters cheer her name.

National leader Judith Collins has phoned Jacinda Ardern to congratulate her on the "outstanding result".

"New Zealand is in for a tough economic ride and it is going to need better for school policy than we have so far seen," she said. "The National party will take time to reflect and we will review and we will change."

"We will take time to reflect and we will review and we will change," she said. "National will reemerge from this loss a stronger, disciplined and more connected party."

"I promise you, the National Party will be a robust opposition"

'We always knew it was going to be tough': National leader Judith Collins

National leader Judith Collins has arrived at National Party headquarters. Many of her supporters cheered as she entered the room and chanted her name.

"We always knew it was going to be tough," she said. "With that sort of welcome, anyone would think we had won."

Collins thanked her volunteers for their work, particularly over the last few months, and everyone who voted National.

"The next three years will be an op for us to repay that trust and we will make you proud that you support us during this tough time," she said.

"To all our candidates who have not been successful tonight, thank you for your hard work." She said it takes courage to put your hand up and do the job."

She also thanked her husband and son, both of whom are on stage with her.

National leader Judith Collins has just left a hotel for National Party headquarters. As she was leaving, reporters asked if it was time to concede, she did not respond.

'Heading towards a pretty incredible result'

Labour MP and Finance Minister Grant Robertson has addressed a group of supporters saying it looks like the part is "heading towards a pretty incredible result".

Mr Robertson is leading the vote count in Wellington Central with 16,437 votes, while the second-placed candidate, Nicola Willis, has 5119 votes.

He has said the party has faced its fair share of challenges this year, including the pandemic and economic downturn.

In a short speech, Deputy Prime Minister Winston Peters has thanked all those who voted for New Zealand First, but unfortunately he has not received enough votes to get into parliament.

"Elections are about democracy .. and we should never stop trusting the people," he said. "We committed ourselves three years ago to being a constructive partner in government. To provide certainty and stability in a fast-changing world," he said.

"To those who have been successful tonight, congratulations and our best wishes."

His party, New Zealand First, has received 2.4 per cent of votes, not enough to get seats in parliament.

Deputy National leader Gerry Brownlee is on track to lose his seat to Labour’s Sarah Pallett in one of a series of extraordinary results in the 2020 election as Jacinda Ardern’s Labour surfs a red wave to victory.

Brownlee, a political veteran and former senior minister, has held the seat since 1996.

He conceded that "no one has a mortgage on the seat, no one has a right to it" and that he had not spent as much time on the ground in his electorate this time around.

"It’s not so much that things have gone wrong for us…once the lockdown came our polling position virtually did a 180 degree turn."

Crowds gather outside Ardern's home as Labour has strong lead

Crowds of supports have gathered outside Jacinda Ardern's home in Auckland, hoping to catch a glimpse of the woman who they hope will lead New Zealand for another three years.

Only 38.5 per cent of the votes have been counted, but Labour has a strong lead of 50.3 per cent. 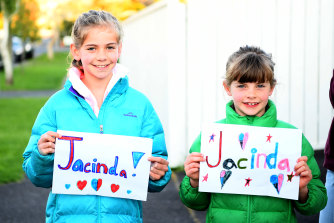 What about those two referenda?

TV NZ host Hilary Barry has delivered an important reminder to people keeping an eager eye on the results of the two referenda held today: "keep your jazz cabbage on hold".

Polling has suggested euthanasia legalisation is likely to win majority support, with the current PM Jacinda Ardern and two of her recent predecessors – Labour’s Helen Clark and National’s John Key – among those backing the change.

But public polling has bounced all over the place on the question of whether to legalise pot for home use, and in designated shops (medicinal cannabis is already legal).

The New Zealand Election Commission is not due to publish preliminary results of the referendum until Friday, October 30, so there’ll be sign word on the results tonight.

It's almost two hours since the polls closed and 31.5 per cent of the votes have been counted. Here's what the current results show:

Jacinda Arden may address the media at 7pm Australian time.