Victorian health officials are concerned for the safety of 46 asylum seekers and refugees detained at Park Hotel in Melbourne after almost half had tested positive to COVID-19 by Sunday afternoon.

Federal authorities are yet to provide adequate information to the state’s public health team about the levels of infection prevention and control in place to protect the detainees, prompting state Health Minister Martin Foley to write to the Commonwealth about Victoria’s concerns. 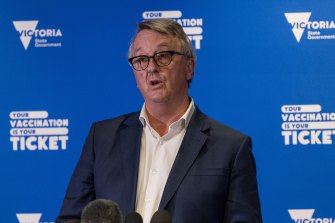 Three more asylum seekers tested positive to the coronavirus on Sunday, bringing the outbreak tally to 20.

“We’re quite concerned about that facility, and the infection prevention and control team met and sought some assurances from the Commonwealth and operator, and we’re looking forward to those issues being addressed,” Mr Foley said.

“What we’re concerned about is the measures in place at the facility need to be the same, or at least the same kind of standard, that we would expect in other arrangements. We’re not saying that isn’t the case, but we just don’t have the clarity of oversight, and we’re seeking some assurances.”

Azizi, a refugee detained at the Park Hotel who has contracted COVID-19, said the virus had been circulating for at least a fortnight, but the 46 detainees were only tested a week ago.

He said he asked the agency responsible for the medical treatment of asylum seekers, International Health and Medical Services, for a COVID-19 test about two weeks ago when he fell ill, but staff offered him pain relief medication instead.

And on Sunday, when he asked staff for pain relief, they told him there was none left, Azizi told The Age. International Health and Medical Services has been contacted for comment. 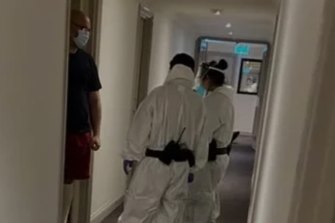 Inside the Park Hotel, where 46 asylum seekers and refugees are detained.

“Long time not good [at the hotel]. Food was expired, not have good food, not have fruits, windows doesn’t open. They didn’t have fresh air, windows closed, no sunshine, dirty hotel. They put me into one room, no medicine, no doctor.”

Azizi said two weeks on, he still had some chest pain and a headache.

Federal Health Minister Greg Hunt said there was a “ring of containment”, including testing during 14-day quarantine, to protect detainees.

“In terms of vaccination of staff, that’s been a fundamental focus of the states,” he said. “Secondly, we test those that are coming to Australia before they come and the testing regime while they’re here.” 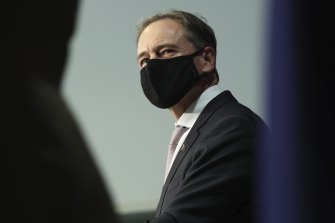 Federal Health Minister Greg Hunt on Sunday said there was a “ring of containment” to protect asylym seekers. Credit:Alex Ellinghausen

Ian Rintoul, a spokesman for the Refugee Action Coalition, said with 20 confirmed cases, the outbreak was likely to grow, and he urged the Australian Border Force to transfer asylum seekers and refugees to a safer facility.

He said some detainees were hesitant to get a COVID-19 vaccine because it was a precondition from the Papua New Guinean government to return to Manus Island or Nauru. Some chose not to get the jab so they would not be forcibly removed from Australia.

“The refugees are victims of medical negligence and there needs to be immediate action to take Park Hotel out of the control of the ABF,” he said.

“Everyone is extremely worried because they’re quite sure that everyone has been exposed, and the fact more people become symptomatic raises their anxiety and confirms their worst fears.

“There’s a lack of medical supervision – the nurse only sees them once a day, there’s no effective means of communicating, they have to remain in their rooms. People asked for Panadol today and nurses told them they didn’t have any.”

A spokesman for the Australian Border Force said the situation was under investigation by relevant health authorities.

“This includes providing all requested information during site assessment visits and the involvement of the Victorian Public Health Unit in the Melbourne APOD [alternative place of detention] daily outbreak management team overseeing the outbreak response.”