Olivia Newton-John was one of those rare local superstars to make it big in the wider world, and while it’s nearly 50 years since she abandoned Melbourne for Malibu (via London), her ties to Australia bent but never severed. 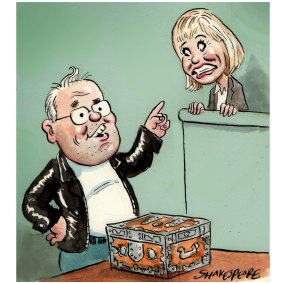 Why else would Newton-John endure the quintessentially Australian awfulness of question time, waving down to star-struck, bickering pollies from the public gallery during a visit in 2019?

Scott Morrison, ever the cringe opportunist, even used it as a chance to sprinkle a Grease reference at the dispatch box.

While Newton-John had been in Canberra as part of her long-running advocacy for cancer research, the trip may have had other consequences. The star would take credit for the Australian Capital Territory’s 2019 decision to legalise cannabis – she had been a firm proponent of medicinal marijuana, to which she was introduced after her breast cancer returned five years ago.

Newtown-John’s face is still splashed across the retreat’s website, but when CBD called to inquire if there were any events planned to commemorate her life, we were told nothing … yet.

Everyone who spent half a second in the same room as Newton-John will be rolling out their memories to anyone who will listen this week. But Age reader Dave Miller takes the cake. Working as a personal trainer in 1984 at Kerry Packer’s exclusive Hyde Park Club, he was wowed by celebrity attendees such as West Indies cricketers Viv Richards and Joel Garner, but couldn’t believe his luck when he was asked to give one-on-one sessions to Newton-John.

Training Australia’s Princess Diana for only a few weeks, he was amazed by her warmth, friendliness and beauty, but also … her lack of physical exertion.

Another of Miller’s clients, former England cricket captain Tony Greig, would turn “as red as a beetroot” in workouts, but Newton-John was the polar opposite, he says, rarely breaking a sweat. “I had visions of the Physical film clip … but no way. She didn’t push herself too hard, she didn’t need to.”

Lawyers are an industrious bunch. None more so than defamation lawyers working on the plaintiffs’ side.

Last Thursday, Sydney silk Sue Chrysanthou, SC, wrote to the NSW Department of Communities and Justice complaining about reforms to the Defamation Act that have been in operation for more than a year.

Chrysanthou’s views are hardly a shock: charities should be able to sue more easily. She bemoans that plaintiffs have to wait a full 28 days before they can commence litigation, and that the new process is so complex that counsel often has to charge $10,000 to write the first letter. Quelle horreur!

You’ve got to admire the persistence. After failing to get their way during the two-year reform process, Chrysanthou’s cohort circulated a briefing note to state MPs condemning the changes as “fundamentally flawed” and calling for them to be scrapped.

Undeterred by a rebuff from NSW Attorney-General Mark Speakman, Chrysanthou and co had a meeting with the department in December last year to have another whinge. It has taken seven months to follow up on that meeting with last week’s letter.

The delay is perhaps unsurprising, as Chrysanthou must have been terribly busy unsuccessfully appealing a costs order in relation to her conflict in acting for both Jo Dyer – a potential witness to the rape allegation against Christian Porter – and for Porter himself. (At least she only has to go halves with Porter’s secret donor.)

Hard to imagine, but it’s a tough time to be an Australian fund manager. Looking across the ASX-listed majors, share prices are tanking.

But not too far behind is the freshly merged Regal Funds Management.

Sydney investment guru Phil King said it was a good-time to be shorting stocks when his company merged with bad boy Robert Luciano’s VGI earlier this year. Perhaps he’s now wishing he shorted his own company.

Regal shares are down more than 54 per cent over the past 12 months, and have only continued to tumble since the tie-up. CBD has obtained a recent note to clients, signed by King and Regal chief executive Brendan O’Connor, that shows six of Regal’s 10 funds have slipped into negative returns over the six months to June.

Clients were told short-term pain is “never pleasant” – you don’t say – but never fear, because happier times are just around the corner.

While hedge fund managers are no strangers to volatile times, some market watchers are not so convinced.

“Their main fund has fallen off a cliff, the share price has been decimated,” one well-placed source tells CBD. “That’s going to be a pretty unhappy marriage.”