Niamh (Irish, pronounced Nieve) had been picking apples with friends Jess and Brodie camping at Batlow Caravan Park near Tumut in southern NSW to earn casual money on a gap year. A talented student with high HSC results, she had a place at UTS to study film production. The youngest of six sisters and a brother, she’d planned to head home to Armidale via Sydney for Easter.

She didn’t arrive. The gap turned into a chasm.

Twenty years ago her parents, Anne and Brian, posed with for a photo in the Herald appealing for information. They have made 15 trips from Armidale to Tumut conducting searches with a metal detector. 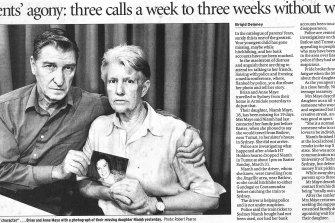 Brian and Anne Maye as they appealed for information on their daughter, in the Sydney Morning Herald on April 19th 2002

They posed again this week. It was their golden wedding anniversary last year, both are aged 81. Anne lights a candle every day for her daughter and Brian has Parkinson’s. There have been weddings and grandchildren and celebrations tainted by Niamh’s absence. 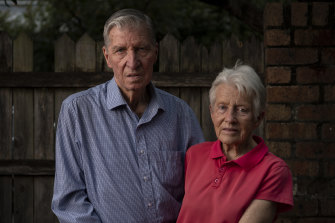 Things started to go wrong for Niamh when her journey home hit problems. Older sister by two years Fionnuala Haggerty, married with two children, said Niamh, calling from a phone kiosk, rang both her and their mum on March 27.

“She called to let me know the CountryLink bus she had reserved for the following day had been on-sold because she hadn’t got back into Batlow to pay for it in time,” she said. “She booked the next available ticket on Easter Sunday.” (March 31, 2002).

Two men, Jason “Jack” Nicklason and Garth Gemmell arrived earlier at the campsite in a 1969 black Holden hearse. Friend Brodie had headed to Victoria and Jess headed to Byron Bay. Jess, Jessica Ribeiro a Melbourne-based musician, told the Herald how she grew up in Armidale with Niamh. She describes her as petite, fearless, outspoken, creative and confident.

“We wanted to do a bit of a road trip adventure before uni the following year,” she said. “We went to the caravan park where we knew older people from school and where we could pitch a tent and get a job.

“I remember the day they [the hearse] arrived at the caravan park.” 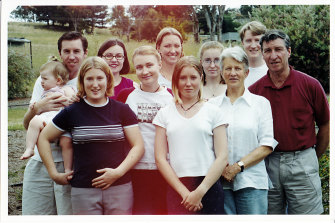 Niamh travelled on Good Friday (29 March) to camp with other fruit pickers and took a lift with Nicklason and Gemmell in the hearse to Jingellic campground. Nicklason agreed to drive her back to Batlow the following morning and they were seen leaving between 10 and 11am. When a friend turned up to wave her off on Sunday, Niamh didn’t arrive.

Six months later Nicklason, who claimed to have dropped Niamh off near Tumut, was in police custody having been arrested in Brisbane for raping a 19-year-old woman. He jumped from a third storey car park outside Brisbane police headquarters taking his life.

But the investigation continued. Ten years later in 2012 there was an inquest in Glen Innes before Coroner Hugh Dillon. The officer in charge delivered an entirely new theory revealing in shocking detail the apparent location and manner of Niamh’s death yet there have been no new searches and no arrests.

The court recorded that Niamh “died on or about March 30, possibly March 31st 2002 and that her death took place somewhere in the vicinity of Tumut”. 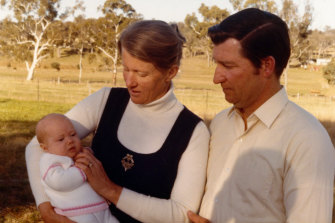 Brian and Anne Maye with Niamh as a baby.

Mr Dillon, now retired who has conducted some 300 inquests, speaking to the Herald on Friday, demonstrated a clear memory of the hearing. He said where the new evidence came from had remained unclear.

“Police are very reluctant to reveal who informers are so there was this cloud of obscurity surrounding all of this,” he said. “I remember reading a lot of material but I didn’t have any real witnesses to talk to or to cross-examine at the time. We kind of came to a dead-end which was frustrating. 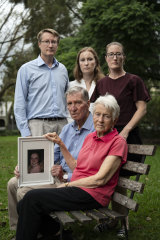 “The one thing you hate doing if you are running an investigation of that nature is to come up short because what you hope to do is find the answers for the family.”

The latest twist in the investigation came last year with reports that someone had years previously seen what could have been a grave on farmland in the area. A one-day search with a police cadaver dog found animal bones.

Det Senior Constable Stan Wall, the current officer leading the inquiry who is due to leave the force this year, said: “The greatest thing to finish my career would be able to give to Brian and Anne some part of their daughter so that it can give some final rest to them.”

Tumut detective Steve Rose, the initial investigator for five years and now retired, said resources were soon depleted by another missing person investigation in the area.

Of the new line evidence at the inquest, he said: “From my understanding, I don’t know how much proof or evidence was involved in that, apart from hearsay.

“I just appeal to anyone who may know something to just remember that this was a girl who went missing 20 years ago and that her family really needs to be able to lay her to rest in the way that they would like.”

Brian said he knew from the moment she was missing that she was no longer alive.“Even after all these years if you are looking for an outcome it’s to close that loop of information to actually be able to say what happened. If you can find out what happened you know where she is and then we can bring her home.” 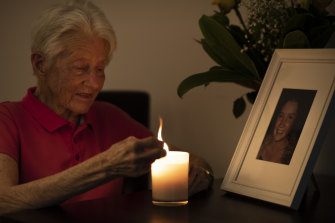 Anne Maye lights a candle each day for her daughter Niamh Maye.Credit:Wolter Peeters

Anne, asked how she had coped for the last 20 years said: “Children are a gift and you never how long you will have them for.

Niamh was very positive, she was looking ahead…so I thought we’ll look at all the positives. We knew that her spirit was with us every day. If she’s in that forest, that’s good, she’d be comfortable with it to some extent. I light a candle every morning and that’s it. None of us use the word closure, it is a meaningless word. It happened and we just have to accept it.”

A website missingniamh.com is launched by the family today and a podcast “Missing Niamh” will be launched later this year.