Terry Branstad says he will work on behalf of President Donald Trump but not in any official role. 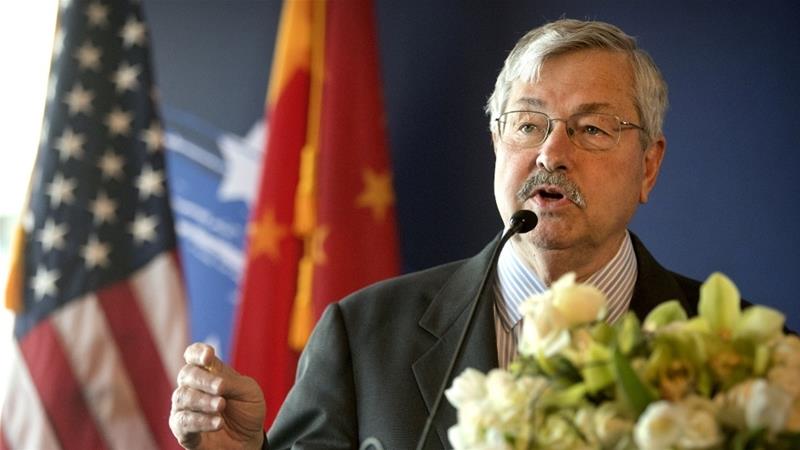 Outgoing United States Ambassador to China Terry Branstad says he will help out Republicans campaigning in his native Iowa after returning home next month.

Branstad also told Hong Kong’s Phoenix TV he considered the phase one trade deal between China and the US as the biggest achievement of his three years in China.

Branstad, 73, said he would be working on behalf of President Donald Trump, Senator Joni Ernst and others, but not in any official role.

“My son is very involved in [Trump’s] campaign, and I will be a volunteer to help him, to help Joni Ernst and other friends for the election in Iowa. But I will strictly be a volunteer,” Branstad told the station in a report broadcast on Thursday.

Ernst, the state’s junior senator, is locked in a tight race, with Democrats hoping to capture her seat on the way to flipping the Senate.

As Iowa’s governor, Branstad was an early Trump supporter and has served as his top envoy to China during the most tempestuous period in relations since diplomatic ties were established in 1979.

Branstad was governor of the major farming state for 22 years over two spans, from 1983 to 1999 and 2011 to 2017. Early in his first term, he met Xi Jinping, now China’s leader, when the then county-level Communist Party official visited Iowa on a 1985 trade trip.

The phase one trade deal reached between the US and China in January amid the continuing tariff war between the sides represented a truce but did not address the more fundamental complaints of the American side.

Still, Branstad said he believed it was ultimately in the best interests of both sides to follow-through with it.

“This was a long and difficult process,” Branstad said. “They worked long and hard to reach an agreement that I think is fair and reciprocal. And it’s going to make a difference for both of our countries.”

Branstad will leave at a time when tensions between the sides are also running high over Taiwan, the South China Sea, the coronavirus pandemic and allegations of spying and technology theft. In July, the US ordered the closure of China’s consulate in Houston, calling it a “center of malign activity”. China retaliated by ordering the shuttering of the US consulate in the southwestern city of Chengdu.