An Eton College paedophile teacher was told he had committed ‘the most gross breach of trust’ as he was jailed for five years today for late-night abuse of pupils.

Matthew Mowbray, 49, was found guilty of eight counts of sexual activity with a child after admitting downloading hundreds of indecent images of children.

He had run a photography club and took pictures of pupils before combining them with child abuse images to create his own indecent creations.

Mowbray – who taught geography at the £42,000-a-year college – had been branded a ‘skilful and deceitful manipulator’ during the harrowing trial at Reading Crown Court.

‘In what was the most gross breach of trust, over a period of years and in respect of a number of children, you breached their trust, the trust of the families who placed their children in your care and the trust of the school which had appointed you.

‘Depression, anxiety, stress, nervousness, a loss of confidence, embarrassment, physical and psychological distress, sadness – are all descriptions given by your victims in their personal statements as they describe their feelings now.

‘For you, your actions brought sexual gratification.’ 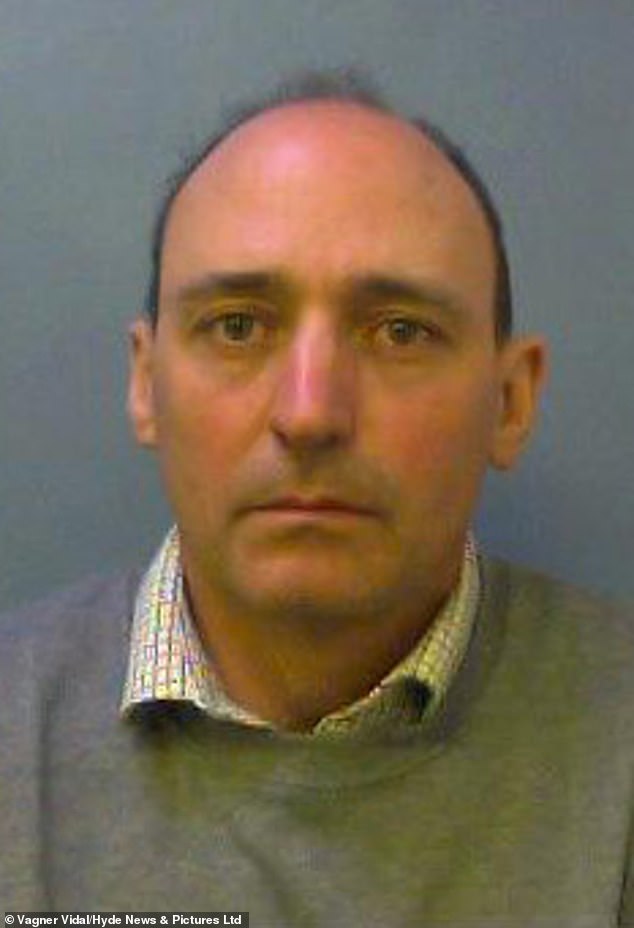 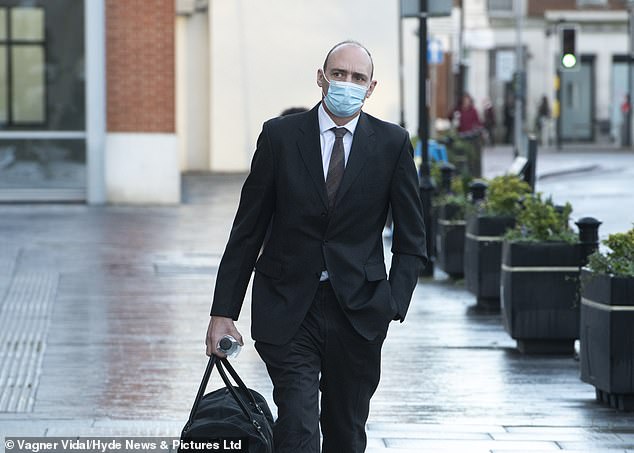 Simon Henderson, the headmaster at Eton College, had paid tribute last month to the ‘extraordinary courage and dignity’ shown by his victims.

Mowbray, from Southampton, had admitted downloading hundreds of indecent images of children, as well as superimposing pupils’ faces on to the naked bodies of unknown children on his computer.

But he denied nine counts of sexual activity with a child against four boys and one girl over a period of several years forcing the court trial to take place.

A jury of six men and six women found Mowbray guilty on eight of the charges and not guilty of one count of sexual activity with a child against a girl.

Mr Henderson said: ‘As Head Master I am outraged at the way Mr Mowbray abused his position of trust and betrayed those in his care.

‘I have offered those individuals involved my unreserved apologies on behalf of the school and we will continue to do all we can to support them moving forward. 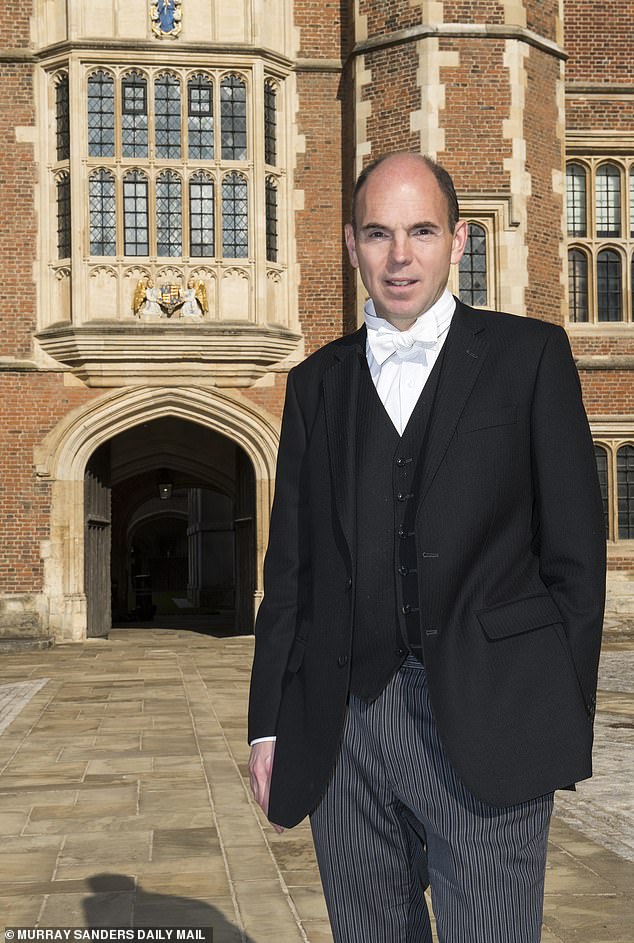 Simon Henderson (pictured), the headmaster at Eton College, paid tribute to the victims

‘It is a difficult truth that many of us – colleagues, pupils and parents – trusted a man who succeeded in hiding his criminal conduct for so long.’

Mr Henderson spoke of a ‘palpable sense of betrayal’, ‘shock’ and ‘deep regret’ the offending was not stopped earlier.

He added: ‘Mr Mowbray was believed to be a caring and professional House Master but we now know that he was a skilful and deceitful manipulator of both young people and adults.’

Mowbray entered boys’ rooms on the pretext of discussing schoolwork before touching them for his own ‘sexual gratification’, the court heard.

The pervert, who wore a dark suit, white shirt and dark red tie, clutched a facemask in his hands and remained expressionless as the verdicts were read out.

The jury reached their verdicts after deliberating for six hours and 34 minutes.

Presiding judge Heather Norton QC had warned Mowbray it was ‘inevitable’ that he would receive a prison sentence, adding: ‘You should prepare yourself for that’.

During the trial, jurors heard that one of the victims told police the teacher ‘put his head on my arm, basically laid down on me without putting his legs up’.

After a boy made a complaint about Mowbray touching him, prosecutor John Price QC said the teacher sent an email to the deputy headmaster in which he wrote: ‘A big part of the awful feeling I have of the situation is that, regardless of whether it’s true or not, it would be impossible to stop the rumours that will inevitably spread among the boys and around the school.

‘It leaves me with a feeling I will never go back to normal unless this is managed very carefully.’

Mr Price told jurors: ‘When he spoke of (the victim’s) complaint being managed very carefully so that he can get back to normal, did he mean prevent it coming out to minimise risk of others coming forward?’

Another victim told the court Mowbray made physical contact with him during late-night visits to his bedroom on ‘five to six occasions’.

In a statement read out in court, the victim said Mowbray came into the room ‘in the dark’ and sat on his bed while chatting to him.

He said: ‘While he was doing so he would gently put his hand down on my thigh and knee and rub his hand up and down my thigh over and over.

Mowbray had previously pleaded guilty to six counts of making indecent images of children and one count of voyeurism in relation to a series of covertly filmed images showing a boy getting dressed at the school near Windsor in Berkshire.

On the charges the former geography teacher denied, defence counsel Sallie Bennett-Jenkins QC said: ‘There’s no covert, surreptitious behaviour, no overt sexual touching, no words to accompany the touching such that it was to convert it into something sexual.’

She said Mowbray was ‘well-respected’ by students and that he had sat and chatted with the boys and occasionally put his hand on them ‘as a gesture of comfort’. 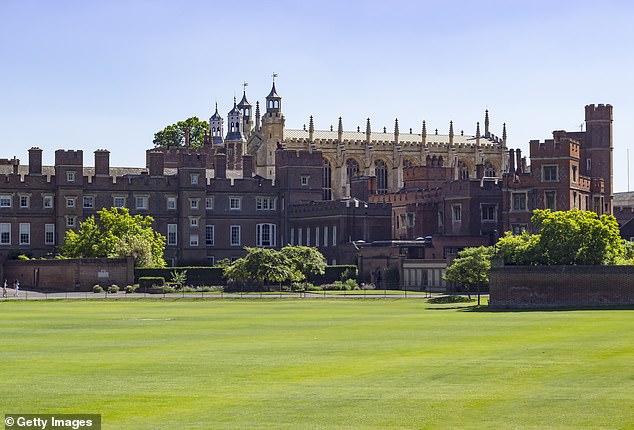 Since 1945, five prime ministers have been educated at Eton (pictured), including Boris Johnson, while the Duke of Cambridge and the Duke of Sussex also studied there

The defendant had previously been described by an ex-pupil as a professional who helped boys ‘flourish in their careers’.

But a jury found he entered boys’ rooms late at night on the pretext of discussing school work before touching them for his own ‘sexual gratification’.

Called as a witness in the defence case, ex-student Arthur Croft said the former geography teacher was respected by other boys at the college.

Giving evidence in court on Monday, Mr Croft, who is also known as Archie, said: ‘I got along with him and there was no trouble.’

He added: ‘We all got along well, you got a sense it was a nice place to be.

‘He took his duties seriously. He was entirely dedicated to every aspect of his work, basically helping boys to flourish in their careers. He was someone who could be relied upon being seen regularly.

‘He was a professional, the atmosphere was happy and it was a secure place, there was not a culture of bullying. I last had contact with Mr Mowbray around three years ago,’ he said.

Mr Croft, who left Eton in 2012, returned to the college to work as a teaching assistant in 2015 for two years.

The witness recalled studying at the esteemed institution where senior geography teacher Mowbray banished a tradition which mocked young boys.

‘There was a tradition of a dance, on one of their first evenings the new boys would have to dance in front of the rest of the boys who would shout at them. They would do it one-by-one or in pairs before a winner was crowned.

‘I do not think Mr Mowbray liked it because of the effect it had on boys’ opinions of the new boys in the year. He made a decision that it should be outlawed on the basis it encouraged bullying – he put a stop to it,’ the former pupil told defence counsel Sallie Bennett-Jenkins QC.

Another former student, Alexander Kintzer, 21, described Mowbray as a ‘parental figure’ who he could talk to about personal issues.

Giving evidence by video-link from the US, Mr Kintzer said he is aware of the charges Mowbray has pleaded guilty to.

Mowbray has admitted downloading hundreds of indecent images of children, as well as creating pseudo-images of boys at the prestigious public school by superimposing their faces on to the naked bodies of unknown children obtained online, the court previously heard.

Asked what he thought of Mowbray checking on students at night, Mr Kintzer said he would check on boys to ‘enforce bedtime’ and ensure ‘academically we were comfortable and on track’.

Mr Kintzer said he came out as gay to Mowbray during a one-to-one meeting which he was nervous about doing because of his religious background, but he described being comfortable bringing it up with the teacher.

‘I felt comfortable talking to him about any range of issues, from personal, academic, domestic, he really acted as a parental figure,’ he added.

In a statement read out in court, Mr Kintzer’s mother, Jennifer Bestor, said her son was ‘well looked after’ by Mowbray.

She said she would on occasion see Mowbray enter her son’s room while she was on a Skype chat with him between 10pm and 11pm, and that he would always knock first.

She said Mowbray was ‘a father I would pick for Alex, not that my husband wasn’t brilliant’.

Defence counsel Sallie Bennett-Jenkins QC told the court that Mowbray would not be giving evidence in the trial.

Jurors previously heard that Mowbray had made pupils ‘freeze’ and feel ‘really uncomfortable’ as he allegedly fondled them in the dark during night-time visits to their bedrooms.

In a witness statement read to jurors, one alleged victim said: ‘I felt really uncomfortable and just froze. The room was dark, the curtains were shut, and the door was closed.’

Mowbray, of Locks Heath, Southampton, was dismissed from his role at the £40,000-a-year school, near Windsor in Berkshire, following his arrest.

He had admitted six counts of making indecent images of children and one count of voyeurism.

The voyeurism offence relates to a series of covertly filmed images showing a boy at the elite boarding school getting dressed.

Since 1945, five prime ministers have been educated at Eton, including Boris Johnson, while the Duke of Cambridge and the Duke of Sussex also studied there.

Marc Thompson, from the Crown Prosecution Service said: ‘Mowbray’s victims described feeling uncomfortable with his nocturnal visits to their rooms. Whilst not overtly sexual acts, they knew the touching was wrong, but were at a loss to know what to do.

‘Mowbray’s intentions became clear with the discovery of the indecent images on his computer. It was through this evidence we were able to prove to the jury that the manner in which he touched the boys was intended to satisfy his own sexual desires.

‘This has been a distressing experience for the victims who were let down by someone they should have been able to trust. We thank them for their help during the investigation and for their courage in giving evidence which has helped to secure today’s convictions.’

Investigating officer, Detective Constable Kathryn Webb, of the Child Abuse Investigation Unit, based at Windsor police station, said: ‘These convictions are a result of an 18 month investigation that was supported by a transparent working relationship with both Eton College and the local authority.

‘The offences were committed whilst Matthew Mowbray occupied a position of trust which he betrayed.

‘The victims and witnesses, many of whom are children, had the courage to come forward and provide evidence on very personal matters and in challenging circumstances.

‘They should be commended for their bravery and take the credit for preventing Matthew Mowbray from committing any more offences against children.’