Economists have warned the remarkable $10 billion stamp duty windfall that bolstered Victoria’s budget position this year will not last and that some of the state Treasury’s economic forecasts seem “optimistic”.

Analysts from UBS investment bank are sceptical of the projections of Victoria’s economic growth in the state budget handed down by Treasurer Tim Pallas on Tuesday and say the vital stamp duty revenue stream is likely to decline in the coming years, instead of increasing as the budget papers indicate.

The bank warns of “downside risks” to the property taxes – with land tax another big earner – that state governments have become heavily reliant on, as the nation’s real estate boom cools and interest rates rise.

Economists from the ANZ bank also issued a briefing note about the budget on Wednesday, taking a more upbeat view than their UBS counterparts. The ANZ analysts predict that the state’s employment performance would beat the government’s projections.

Pallas spoke on Tuesday of being “often pleasantly surprised” by the recovery of Victoria’s economy and budget from the COVID-19 crisis and Treasury planners have twice had to revise this year’s stamp duty forecasts upward as property prices surged and sales volumes soared.

Last year’s budget forecast that $6.7 billion would flow into the state’s coffers through the tax but revised the projection up to $7.6 billion in December’s mid-year update and now believe that nearly $10.2 million will be raised by the end of June.

Stamp duty revenue is then projected to drop off sharply in 2022-2023 as the property market continues to cool before returning to a growth trajectory – of an annual 2 per cent a year for the following three years – although Treasury has noted volatility risks from movements in the market.

But the UBS team, led by the bank’s chief economist George Tharenou, are more convinced by the forecasts of NSW Treasury, which believes its stamp duty revenue – which is also forecast to spike this year – will steadily decline over the four-year forecasting period.

“The recent softening in both dwelling prices and volumes in April, before the impact of looming RBA rate hikes, suggests downside risks for property-related tax revenues,” the UBS team wrote. 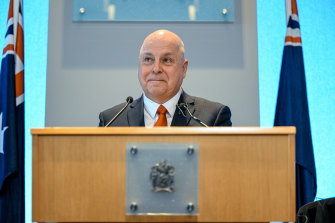 “This seems optimistic compared to our forecast for national real gross domestic product of 3.9 per cent, year-on-year, in 2021-2022,” the team wrote.

“But a faster rebound in net overseas migration would support Victorian population growth and increase the likelihood of economic outperformance.”

The ANZ economists were broadly more accepting of Treasury and Finance’s numbers but the bank had a more optimistic view of the potential of Victoria’s employment market than their public service counterparts.

“The labour market forecasts suggest further room for strength. The unemployment rate is forecast to bottom out at 4 per cent in 2022-2023 and gradually lift to 4.75 per cent by 2025-26.

“While we broadly agree with the direction, we think labour market outcomes will be more robust than the budget estimates,” the ANZ team wrote. “We forecast the unemployment rate to be in the 3s in 2022-2023, which could bode well for Victoria’s economy.”

Cut through the noise of the federal election campaign with news, views and expert analysis from Jacqueline Maley. Sign up to our Australia Votes 2022 newsletter here.