A laboratory study suggests that the South African variant of the coronavirus may reduce antibody protection from the Pfizer Inc/BioNTech SE vaccine by two-thirds, and it is not clear if the shot will be effective against the mutation, the companies said on Wednesday.

The study found the vaccine was still able to neutralize the virus and there is not yet evidence from trials in people that the variant reduces vaccine protection, the companies said.

Still, they are making investments and talking to regulators about developing an updated version of their mRNA vaccine or a booster shot, if needed.

For the study, scientists from the companies and the University of Texas Medical Branch (UTMB) developed an engineered virus that contained the same mutations carried on the spike portion of the highly contagious coronavirus variant first discovered in South Africa, known as B.1.351. 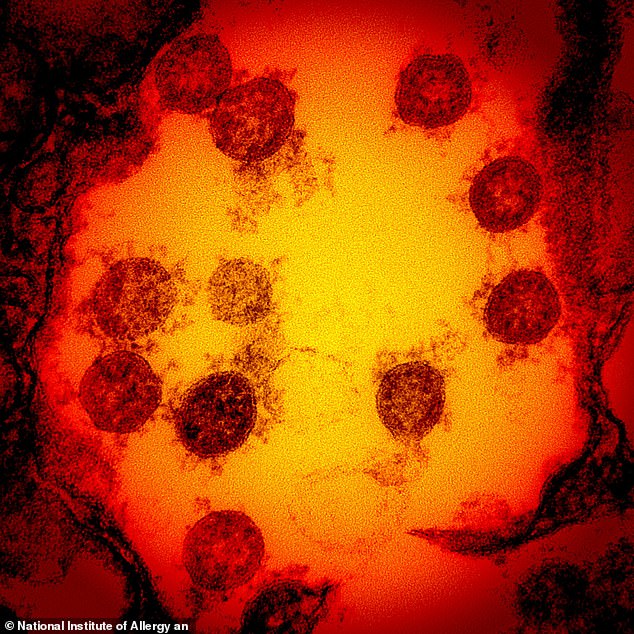 The image above is an undated handout photo showing a transmission of coronavirus particles isolated from a patient. New research suggests that the COVID-19 vaccine produced by Pfizer and BioNTech is not as effective against a variant of the virus found in South Africa

The spike, used by the virus to enter human cells, is the primary target of many COVID-19 vaccines.

Researchers tested the engineered virus against blood taken from people who had been given the vaccine, and found a two- thirds reduction in the level of neutralizing antibodies compared with its effect on the most common version of the virus prevalent in US trials.

Their findings were published in the New England Journal of Medicine (NEJM).

Because there is no established benchmark yet to determine what level of antibodies are needed to protect against the virus, it is unclear whether that two-thirds reduction will render the vaccine ineffective against the variant spreading around the world. 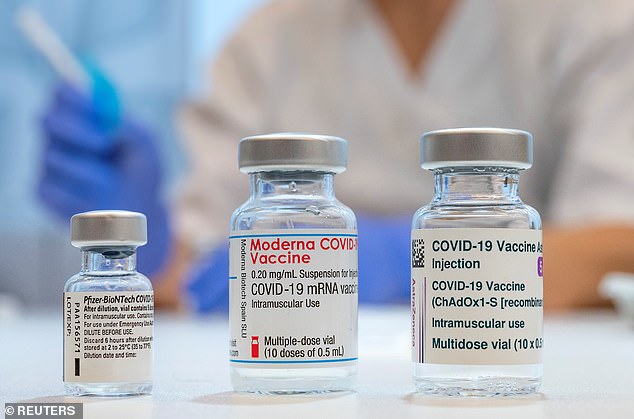 The study found the vaccine was still able to neutralize the virus and there is not yet evidence from trials in people that the variant reduces vaccine protection, the companies said. The image above shows empty vials of the coronavirus vaccine

However, UTMB professor and study co-author Pei-Yong Shi said he believes the Pfizer vaccine will likely be protective against the variant.

‘We don’t know what the minimum neutralizing number is. We don’t have that cutoff line,’ he said, adding that he suspects the immune response observed is likely to be significantly above where it needs to be to provide protection.

That is because in clinical trials, both the Pfizer/BioNTech vaccine and a similar shot from Moderna Inc conferred some protection after a single dose with an antibody response lower than the reduced levels caused by the South African variant in the laboratory study.

Even if the concerning variant significantly reduces effectiveness, the vaccine should still help protect against severe disease and death, he noted.

Health experts have said that is the most important factor in keeping stretched healthcare systems from becoming overwhelmed.

More work is needed to understand whether the vaccine works against the South African variant, Shi said, including clinical trials and the development of correlates of protection – the benchmarks to determine what antibody levels are protective.

Pfizer and BioNTech said they were doing similar lab work to understand whether their vaccine is effective against another variant first found in Brazil.

Moderna published a correspondence in NEJM on Wednesday with similar data previously disclosed elsewhere that showed a sixfold drop antibody levels versus the South African variant.

Moderna also said the actual efficacy of its vaccine against the South African variant is yet to be determined.

The company has previously said it believes the vaccine will work against the variant.

The US is vaccinating an average of 1.7 million Americans per day against COVID-19, up from under 1 million a month ago.

New figures from the White House show a steady increase in the pace of vaccinations over President Joe Biden’s first month in office.

Much of the increase, according to data from the Centers for Disease Control and Prevention, comes from people receiving their second dose.

The pace of first-dose vaccinations has been largely steady over the past several weeks, hovering around an average of 900,000 shots per day. 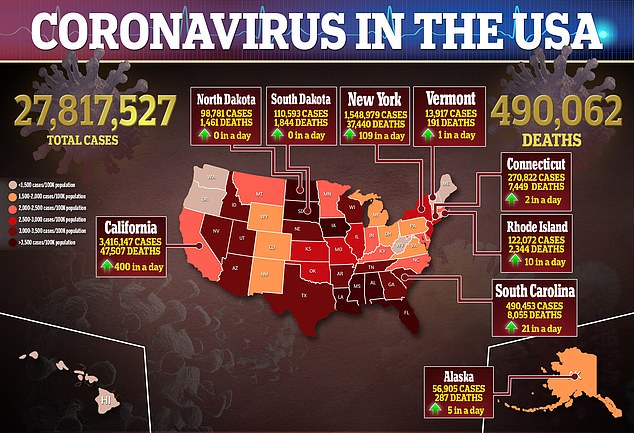 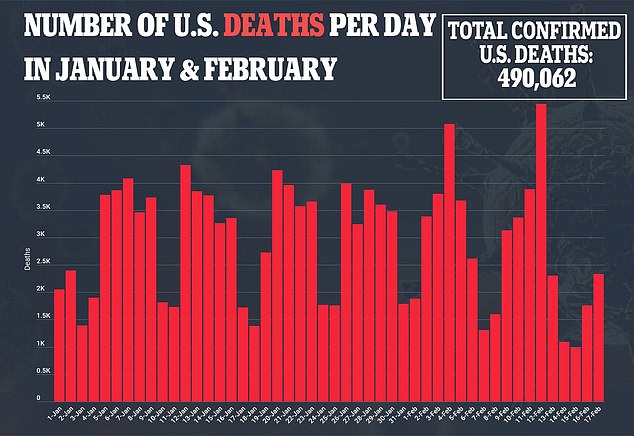 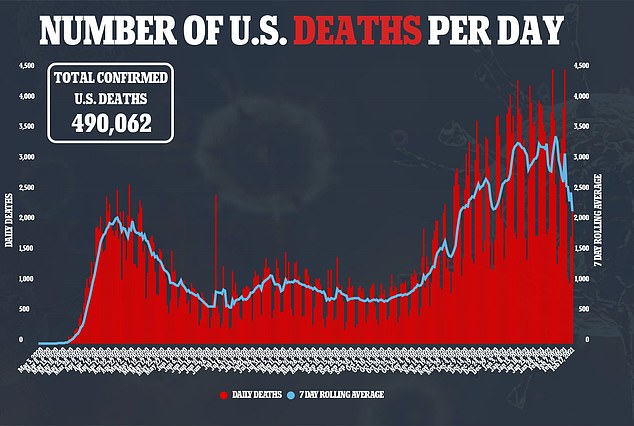 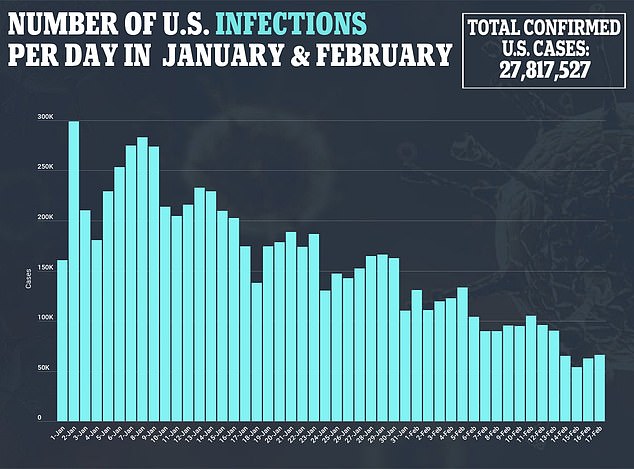 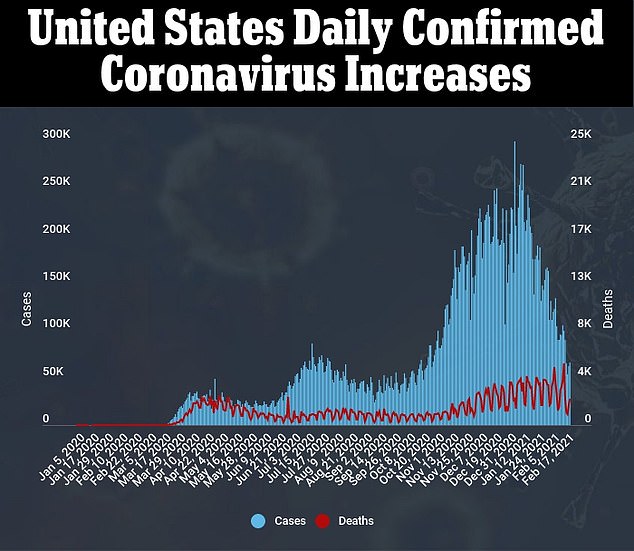 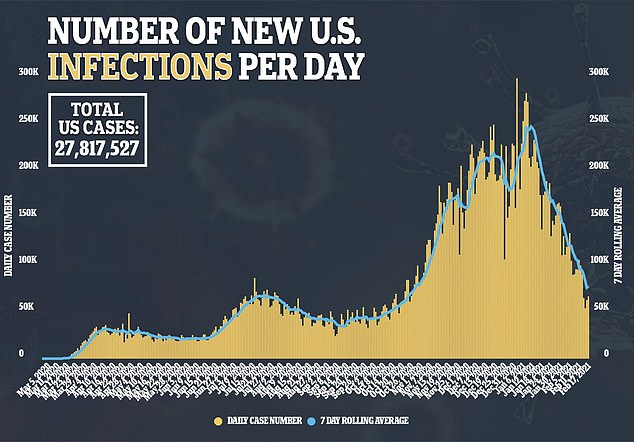 Biden is on track to blow past his goal of 100 million shots in his first 100 days in office – though the pace must pick up even further to meet his plans to vaccinate nearly all adults by the end of the summer.

The White House also said the government will ramp up genetic analysis of coronavirus samples from around the country to gain information on where more infectious and potentially deadlier mutations may be spreading.

According to data from Johns Hopkins University, there were 62,398 new COVID-19 cases and 1,756 deaths in the US on Tuesday.

As of Wednesday, more than 27.8 million Americans have been infected with COVID-19 since the start of the pandemic. Of those, more than 490,000 have died.