Health Secretary Matt Hancock hailed the numbers as ‘remarkable’ after a ‘heartbreaking and difficult year.’

The research by Public Health England showed that vaccines prevented at least 11,700 deaths in those aged 60 and older from December up to April.

Mr Hancock said: ‘In only a few short months, our Covid-19 vaccines have saved the lives of over 11,700 people and stopped over 33,000 from being hospitalised.

‘After a heartbreaking and difficult year, that is remarkable.

‘That’s tens of thousands of parents, children, siblings, friends and loved ones saved – and millions more who haven’t had to feel the impact of that horrible loss too.

‘This is further proof that getting a vaccine is one of the most important things you will be asked to do in your lifetime.’ 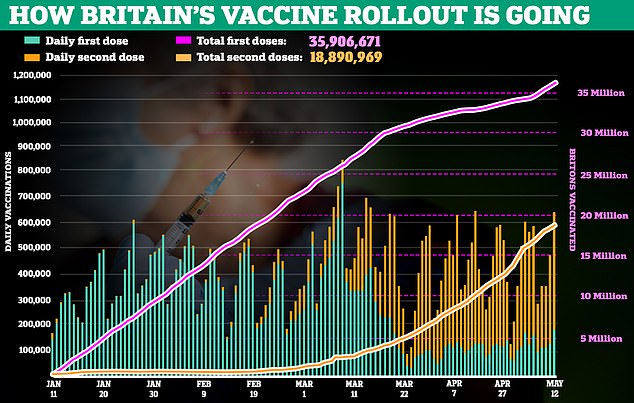 Another 184,210 people got their first doses on Wednesday along with 452,437 booster jabs, meaning 35.9million — two-thirds of adults — have had at least one vaccine and 18.9m are fully immunised 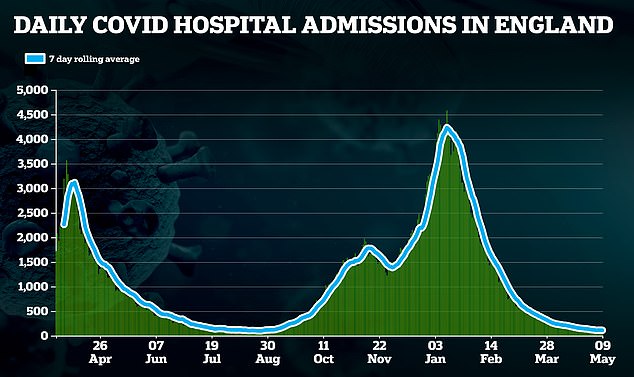 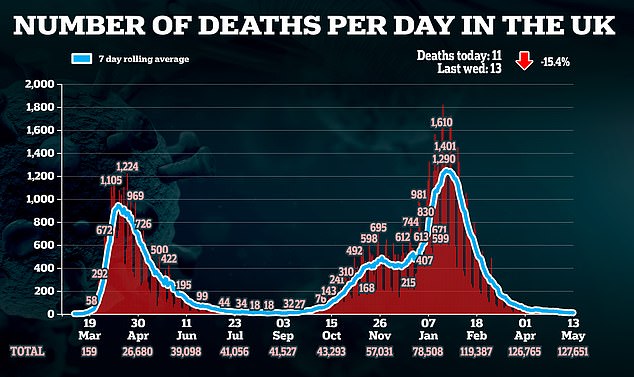 Government figures yesterday showed that a further 11 people had died from the virus, the same as the previous day.

This latest research compared the actual number of deaths with those which would have likely occurred had the vaccines not been available.

PHE said the increasing evidence that vaccines help reduce transmission of the virus means the true figures could be even higher.

Dr Mary Ramsay, head of immunisation at PHE, said: ‘The vaccine has already saved so many lives and we can now see the huge impact it has had on preventing people becoming seriously ill and therefore also protecting our hospitals.

The coronavirus vaccine programme in England opened to people under the age of 40 for the first time yesterday.

NHS England said around a million adults aged 38 and 39 would be invited to come forward for their jab.

They will be offered either the Pfizer or Moderna vaccine on the back of guidance from medical regulators last week.

The Joint Committee on Vaccination and Immunisation (JCVI) said under-40s should be given an alternative to the AstraZeneca jab due to its link to rare blood clots.

People who qualify for a jab will be invited via a text from ‘NHSvaccine’, which includes a web link to the health service’s online booking service.

Those who can’t access the internet can call 119 instead to get an appointment at one of 1,600 sites administering the vaccines across England.

So far more than a quarter of the entire UK population – 18.1million – has been fully vaccinated against Covid and more than half – 35m – have received the first dose.

NHS national medical director Professor Stephen Powis said the success of the rollout was owed to ‘careful planning and precision of NHS staff’.

‘As these figures highlight, getting your vaccine could save your life or stop you becoming seriously ill from Covid-19.

‘It will also significantly reduce your chances of getting infected and infecting others. It is vital to get both doses of your vaccine when you are offered it.’

Vaccines minister Nadhim Zahawi added: ‘The Covid-19 vaccination programme continues at its record-breaking pace and it’s fantastic to see the incredible impact it’s having on the country already.

‘Wherever you come from, whatever your religion, ethnicity or background, make sure to book in your vaccine when the time comes.’

A Government-commissioned study by Imperial College London on Thursday revealed that the vaccine rollout slashed infection rates among people over 55 during April and experts said it has broken the link to hospital admissions and deaths.

The REACT survey found that infections plummeted by 50 per cent between March and April and infections fell most sharply – by two thirds – in the 55 to 64 age group as millions of them received their first dose of a vaccine.

The study found that overall one in 1,000 people in England tested positive in the final two weeks of April.

This was down from one in 500 at the end of March and one in 64 at the beginning of January.

One of the study’s authors, Imperial College epidemiologist Professor Paul Elliott, said: ‘There has been a halving of the prevalence in the period from the end of March to mid-April and the beginning of May…

‘There is a fall in all age groups except the 25 to 34-year-olds, with a particularly significant fall in 55 to 64-year-olds and, of course, this coincides with the rollout of the vaccine programme to that age group.’

He added: ‘We saw falls earlier in the older people who had been vaccinated and there was an uncoupling of infections from hospital admissions and deaths. We are seeing the effects of vaccines in our data.’