Deadly tornado storms in Kentucky are believed to have blown an 80 year-old photo 150 miles away to Indiana.

Katie Posten, 30, of New Albany, Indiana, situated across the Ohio River from Louisville, Kentucky, was walking to her car on Saturday morning when she noticed the 1942 photo on her windshield.

Posten grabbed it and saw it was a black and white photo of a woman in a striped sundress and headscarf holding a little boy in her lap. On the back, written in cursive, it said, ‘Gertie Swatzell & J.D. Swatzell 1942.’

A few hours later, Posten would discover that the photo had made quite a journey – almost 150 miles on the back of monstrous winds. 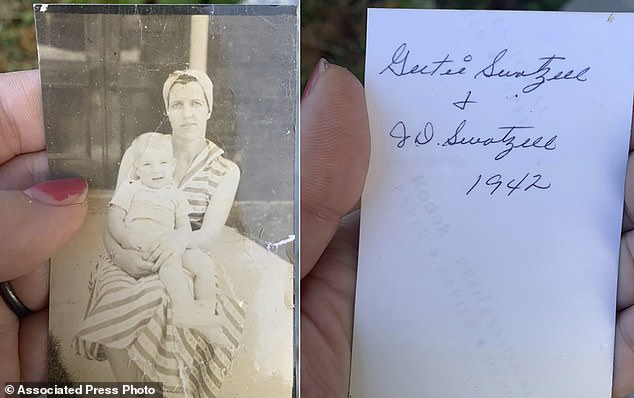 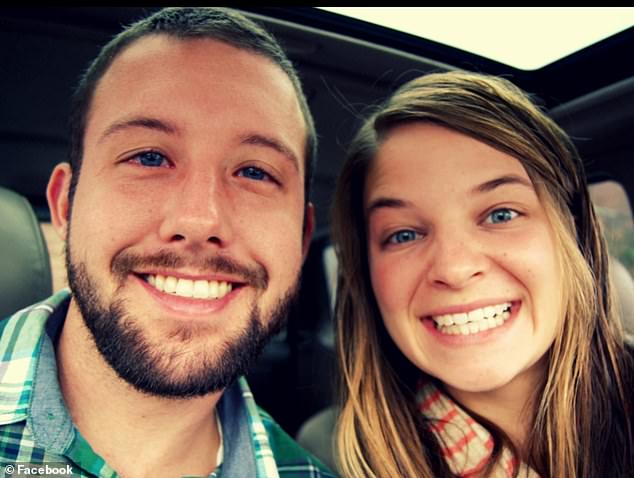 Katie Posten, 30, (right) found the photo stuck on her windshield in New Albany, Indiana, a town about 150 miles from Dawson Springs 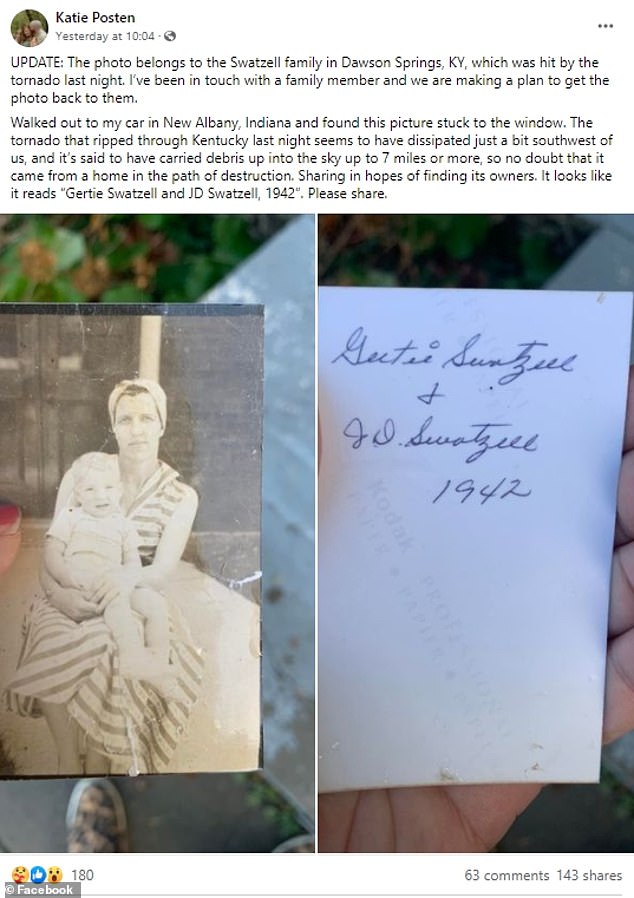 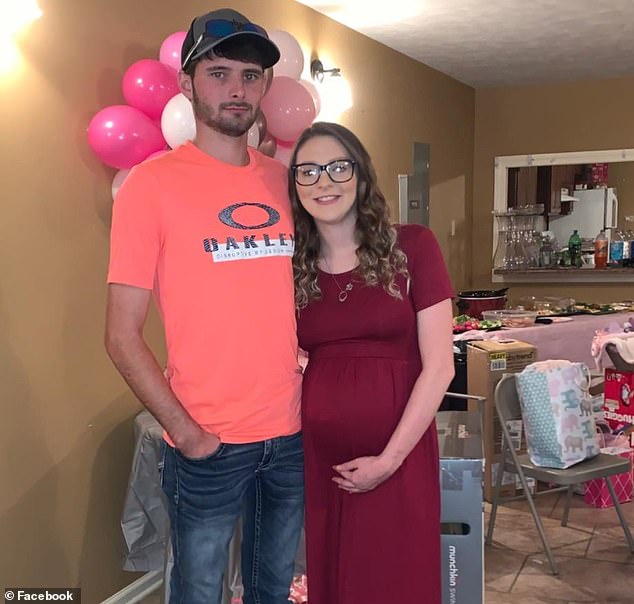 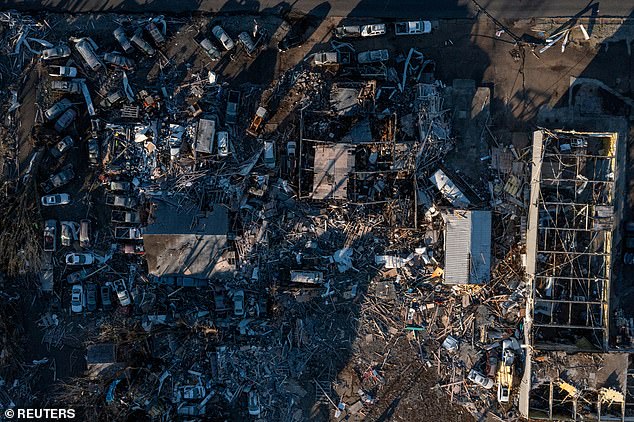 The epicenter of Friday night’s storm was in Mayfield, Kentucky, about 70 miles from Dawson Springs, which saw massive destruction

She had been tracking tornadoes that hit the Midwest on Friday night which killed dozens of people across five states.

When she first noticed the photo on her windshield, Posten had assumed it was a piece of debris from the storm as it resembled a note or a receipt.

‘Seeing the date, I realized that was likely from a home hit by a tornado. How else is it going to be there?’ Posten said in a phone interview Sunday morning. ‘It’s not a receipt. It´s well-kept photo.’

Posten posted an image of the photo on social media sites such as Facebook and Twitter and asked for help in finding its owners.

She said she was hoping someone on social media would have a connection to the photo or share it with someone who had a connection.

The connection was made with Cole Swatzell of Dawson Springs, Kentucky, after he commented on her post that the photo belonged to his family.

‘A lot of people shared it on Facebook. Someone came across it who is friends with a man with the same last name, and they tagged him,’ Posten said.

Posten plans to return the photo to the Swatzell family sometime this week. Swatzell says he isn’t clear which of his relative’s homes the snap came from, so its further details on its astonishing journey have yet to emerge.

‘It´s really remarkable, definitely one of those things, given all that has happened, that makes you consider how valuable things are – memories, family heirlooms, and those kinds of things,’ she said.

‘It shows you the power of social media for good. It was encouraging that immediately there were tons of replies from people, looking up ancestry records, and saying ‘I know someone who knows someone and I´d like to help”.’

The town of Dawson Springs, located 60 miles east of Paducah, had seen traces of destruction from the storm including homes leveled and trees splintered as well as search and rescue teams continuing to scour the community for any survivors.

The epicenter of the destruction was the town of Mayfield, a town of about 10,000 people in the far western part of Kentucky, which is 70 miles from Dawson Springs. 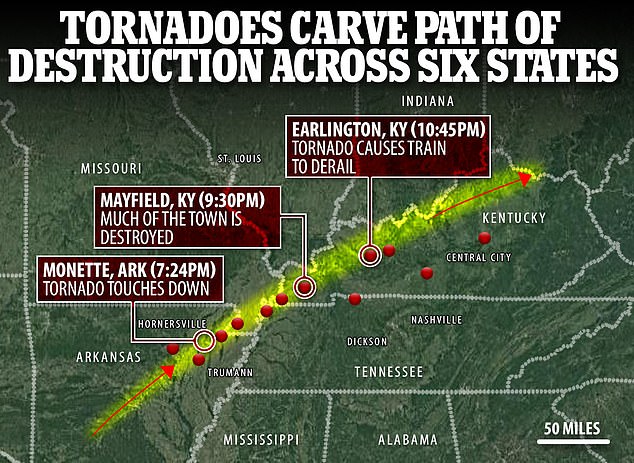 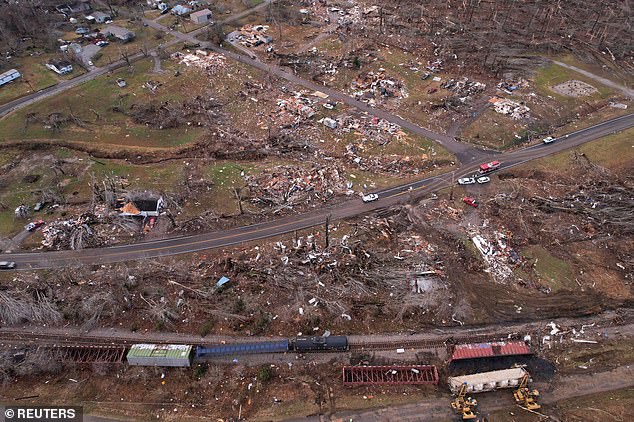 A derailed train is seen in Earlington, Kentucky amid damage and debris after a devastating outbreak of tornadoes 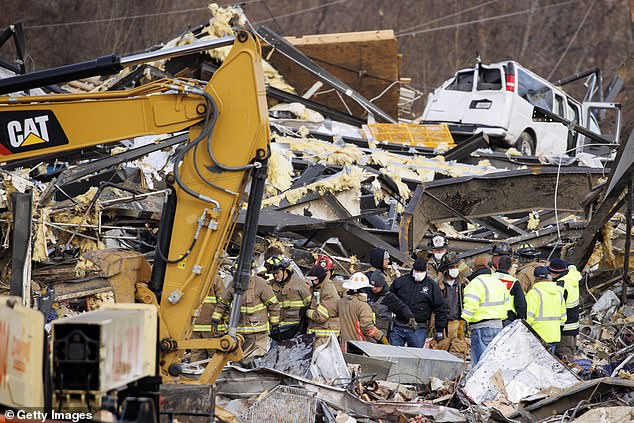 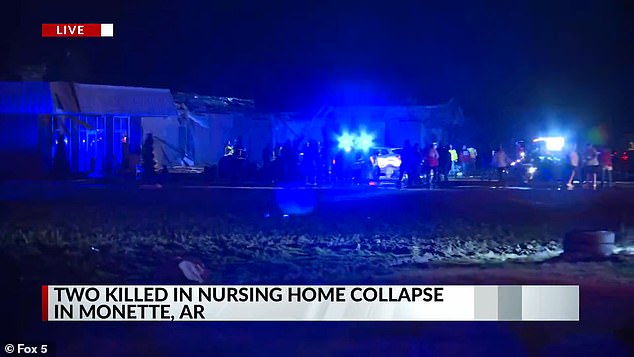 Emergency crews were on the scene in Monette, Arkansas, where two people died in a nursing home collapse

The Amazon warehouse in Edwardsville, Illinois, was pictured on Friday night with its roof ripped off after a tornado swept through the area

More than 80 people are confirmed dead in Kentucky alone, many of them workers at a candle factory in Mayfield, Governor Andy Beshear said Sunday morning as he raised the confirmed toll by 10 fatalities.

It shatters the prior record for the deadliest tornado in Kentucky history, set in 1890 when a twister killed 76 in the Louisville area, according to National Weather Service records.

‘(The death toll) is going to exceed more than 100. This is the deadliest tornado event we’ve ever had,’ Beshear told CNN, adding that in the town Dawson Springs alone, the list of the missing is eight pages long, single-spaced.

‘I’ve got towns that are gone – that are just, I mean, gone,’ he said. ‘You go door-to-door to check on people and see if they’re okay. There are no doors. The question is, is there somebody in the rubble of thousands upon thousands of structures. I mean, it’s devastating.’

One twister carved a track that could rival the longest on record, as the stormfront smashed apart a candle factory in Kentucky, crushed a nursing home in Arkansas and flattened an Amazon distribution center in Illinois.

Beshear said that one tornado was on the ground for 227 miles, 200 of which were in Kentucky, which would break the prior global tornado-track record of 219 miles.

The death toll across five states also includes six people in Illinois, where an Amazon facility was hit; four in Tennessee; two in Arkansas, where a nursing home was destroyed; and two in Missouri. 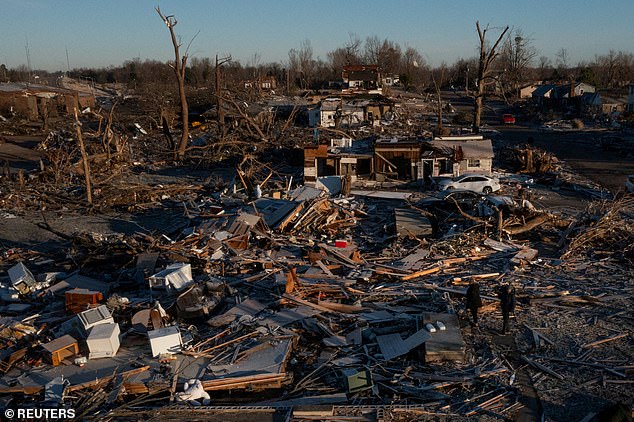 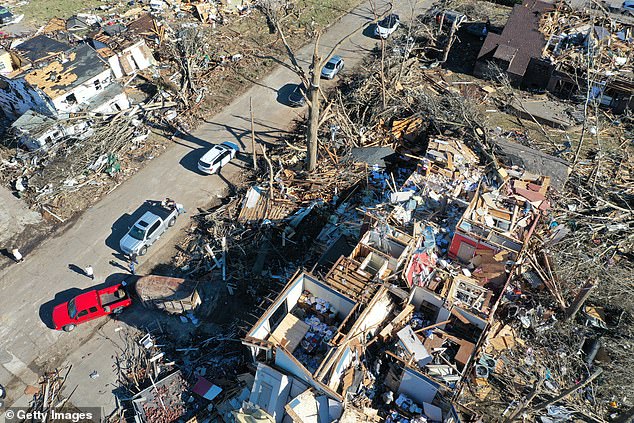 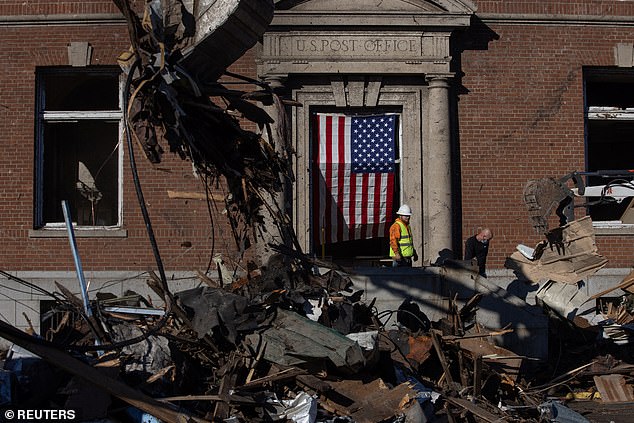 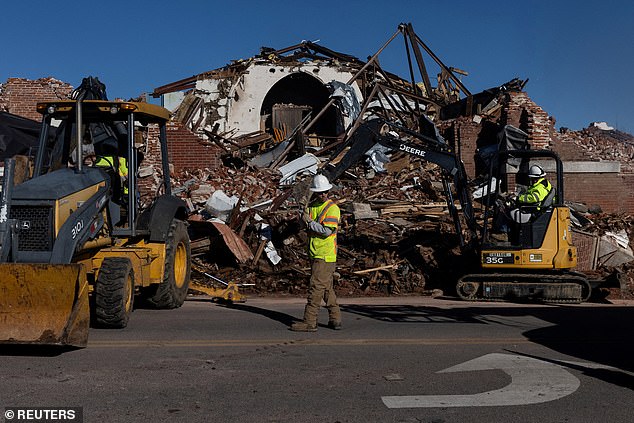