Why did Trump have band-aids on his hand? Photos suggest president may still be receiving IV fluids or drugs – despite claiming to be ‘medication free’ after his battle with coronavirus

President Donald Trump has been spotted with band-aids on the back of his hand, suggesting he is receiving intravenous fluids despite claiming to be ‘medication free’ after his battle with coronavirus.

The flesh-colored bandages were seen on the back of Trump’s right hand as he delivered remarks from a balcony at the White House to supporters on the South Lawn on Saturday.

The bandages were placed in a spot that is commonly used to deliver IV fluids or medications. Much less commonly, it could be used as a site to draw blood for tests, if veins in the arm were difficult to access, a medical expert told DailyMail.com.

The expert noted that it is possible the bandages were placed over an accidental cut or scratch, thought the location would be highly coincidental.

It’s unclear what medication could have been delivered through the presumed IV, but it is unlikely to be the steroids that Trump says he is no longer taking, because they are widely available in oral form.

‘We don’t know what he’s being treated with, but I will say that if they went through the trouble of starting an IV *just* to give him fluids, that’s a major reason for [alarm]— there’s no need for that *if* he’s holding down fluids on his own,’ tweeted Dr. Jorge A. Caballero, a clinical instructor of anesthesiology at Stanford Medicine. 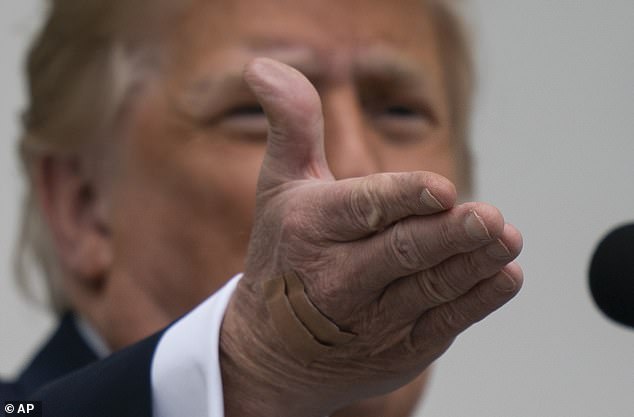 President Donald Trump has been spotted with band-aids on the back of his hand, suggesting he is receiving intravenous fluids despite claiming to be ‘medication free’ 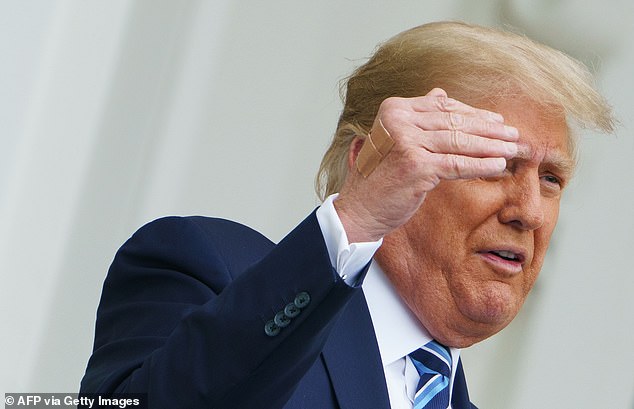 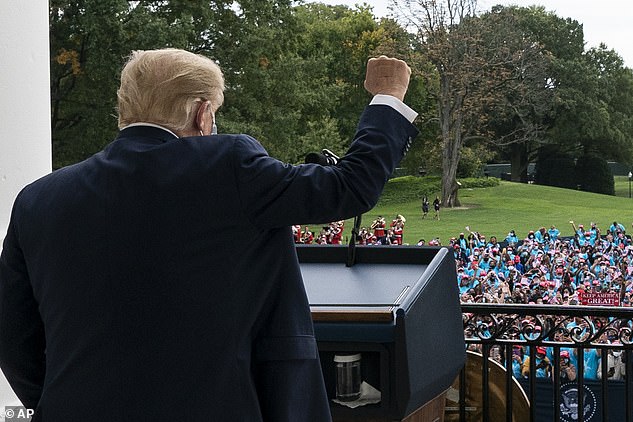 President Donald Trump pumps his fist to the crowd with a bandages on his hand, before speaking from the Blue Room Balcony of the White House to a crowd of supporters, Saturday

The bandages were not seen after Trump’s release from hospital on Monday, and bandages over his hand suggest an IV in the past 24 to 48 hours, Caballero said.

Aside from the steroid Dexamethasone, which is typically taken orally, Trump’s main medications that were publicly announced were Remdesivir and an antibody cocktail made by Regeneron.

Remdesivir is typically administered in a five-day course, and the Regeneron cocktail is a one-time dose, leaving it mysterious what medication, if any, Trump would have taken in the past 48 hours.

Intravenous access is used to administer medications and fluid replacement which must be distributed throughout the body, especially when rapid distribution is desired.

Although Trump was discharged from Walter Reed National Military Medical Center on Monday, the White House is equipped with a full suite of medical equipment, and his doctors would easily be able to administer IV treatment there.

On Friday, Trump said in an interview ‘right now I’m medication free, I’m not taking any medications as of eight hours ago,’ adding ‘which frankly makes me feel good, I don’t like medication.’

However, when asked a second time what medications he was taking in the interview with Fox News contributor Dr. Marc Siegel, Trump hedged, saying ‘I think pretty much nothing.’

Trump did say that he was no longer taking the powerful steroid Dexamethasone, which some medical experts had warned can have psychological side effects including confusion and aggression.

‘I tolerated it very well, I don’t take it anymore. It was pretty short term,’ Trump said of the steroid, which the CDC recommends for treating coronavirus only in cases where a patient is admitted on supplemental oxygen or requires ventilation.

Earlier on Friday Nancy Pelosi had said Trump is ‘clearly under medication’ and claimed he is an ‘altered state.’ 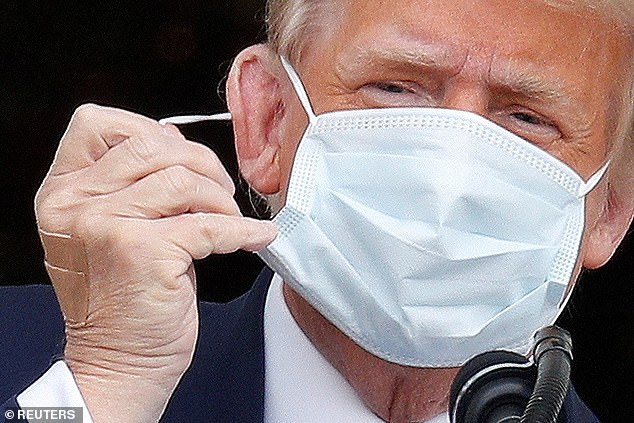 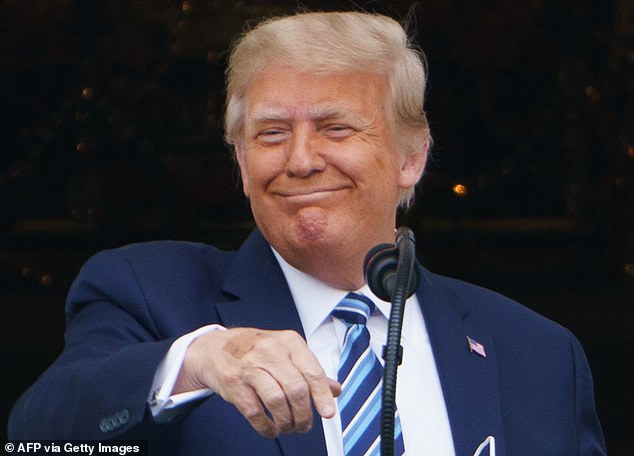 Trump takes his mask off before speaking from the South Portico of the White House in Washington, DC during a rally on October 10, 2020

At Saturday’s White House event, Trump took off his mask and told a crowd of hundreds of fans ‘I’m feeling great’ and the coronavirus is ‘disappearing’.

It was his first public event since his COVID diagnosis last week.

The president spoke for just 17 minutes at his much-anticipated return to re-election campaigning, which was organized in partnership with Candace Owens’ Blexit group, a campaign urging black Americans to shift their support from Democrats to Republicans.

During the unusually short speech from Trump he laid into ‘sleepy Joe’ Biden, claimed he has achieved great things for black communities across America and hit out at Black Lives Matter protesters calling them ‘leftwing fanatics’.

This marks the first major event at the White House since the ‘superspreader’ event in the Rose Garden on September 26 where Trump unveiled Amy Coney Barrett as his Supreme Court pick and at least nine attendees later tested positive for the virus.

It comes as Trump vowed to get back to business as usual after being hospitalized last week for COVID-19, in defiance of social distancing and quarantine rules.

WHAT ARE THE DRUGS TRUMP IS BEING TREATED WITH AND WHAT ARE THEIR SIDE EFFECTS?

President Trump has been given at least three potent drugs since announcing he tested positive for COVID-19 on Thursday night: Regeneron’s cocktail of lab-made antibodies, the antiviral remdesivir, and the steroid dexamethasone.

Two of those medications are still experimental for treating COVID-19, and have given emergency use authorization by the Food and Drug Administration (FDA).

And White House physician Dr Sean Conley admitted on Monday that he would not disclose every single medication that the president is currently receiving (citing HIPAA patient privacy laws, which suggests that Trump himself gave Dr Conley permission to disclose some of his medications, but not all of them).

Remdesivir, dexamethasone and the antibody cocktail are all in ongoing trials – but it’s unclear if anyone besides the US Commander-in-Chief has ever been treated with all three.

Those three drugs are ‘as much as we know [about the president’s treatment regimen] – but I found it all really confusing, based on the reports,’ Dr Mark Poznansky, an infectious disease specialist at Massachusetts General Hospital told DailyMail.com.

When asked if there was any precedent for treating a COVID-19 patient with all three drugs, Dr Poznansky replied, ‘no.’

‘But the individual decisions are based on the individual patient, and all bets are off when you’re dealing with the president, the commander-in chief,’ he added.

‘The implication is that the doctors believe that the risk of using these is outweighed by the potential benefit.’

And while we have some clarity on the potential side effects of each of the  drugs, how they might interact is a mystery, ‘because they just haven’t been used frequently enough…we don’t know about the combination,’ Dr Poznansky said.

But even on their own, the side effects of these drugs could be particularly concerning for the president, considering that the steroid can cause mood swings, confusion and aggression.

The drugs he was treated with and their potential side effects are:

WHEN HE GOT IT: Trump received a single 8 gram dose of Regeneron’s cocktail of lab-made antibodies on Friday.

WHAT IT DOES: REGN-COV2 is a combination of two lab-made versions of antibodies that help block the coronavirus from entering cells.

The hope is that the treatment drives down viral load, keeping it from overrunning the body and sending the immune system haywire, and preventing the infection from becoming severe.

WHAT THE DATA SAYS: REGN-COV2 is still in early trial phases, but the first data from its clinical trial found that it dramatically lowered viral load within a week and cut recovery time in half in patients that weren’t sick enough to be hospitalized.

Regeneron has not yet studied the drug in severely ill patients.

THE POSSIBLE SIDE EFFECTS: The main concern is these types of treatment occasionally trigger ‘antibody-dependent enhancement,’ which means the intended therapeutic actually helps the virus invade cells.

So far, the trials don’t suggest that REGN-COV2 is causing this phenomenon.

WHEN HE GOT IT: President Trump was given his first dose of a five-day treatment course on Friday evening, after he was transferred from the White House to Walter Reed National Medical Center.

He has since received his second and third dose of the drug.

WHAT IT DOES: Remdesivir is an antiviral therapy originally designed to treat Ebola.

Scientists are not entirely sure why, but it helps to prevent coronavirus from making more copies of itself.

WHAT THE DATA SAYS: Late-stage clinical trials of remdesivir found that patients treated with the drug were more likely to recover within 11 days than those who did not get the drug.

Their survival odds were about 40 percent better. In May, the drug became the first to get emergency use authorization from the FDA for treating severely ill patients. That approval has since been expanded to any hospitalized patients.

THE POSSIBLE SIDE EFFECTS: It can cause nausea, vomiting, chils, sweating or light-headedness. The drug also may harm liver function, meaning that patients have to be closely monitored.

There was some suggestion the Trump’s liver and kidney function were suboptimal last night, but Dr Conley said Monday the president was just ‘dehydrated.’

DEXAMETHASONE, THE $6 STEROID WITH COMMON PSYCHIATRIC SIDE EFFECTS

WHEN HE GOT IT: The president got a dose of dexamethasone on Saturday after he developed a high fever and his blood oxygen levels dropped below 94 percent on two occasions.

WHAT IT DOES: Dexamethasone is a cheap steroid known to tamp down inflammation. It’s already approved for use in other conditions in the US.

WHAT THE DATA SAYS: Although it hasn’t yet been given emergency approval in the US, dexamethasone is the most promising treatment yet for coronavirus.

For that reason, many doctors were alarmed to see President Trump treated with the drug because using it suggested either that he was very sick, or that doctors were taking a risk in giving it to him early.

These mood changes include aggression, agitation and confusion.

‘Steroids are always very dangerous medications to use,’ Dr Edward Jones-Lopez, an infectious disease specialist at the University of Southern California in Los Angeles, told Reuters.

‘That is why it (dexamethasone) is used in severe to critical patients… There can be neuropsychiatric side effects. These are medications that we use very, very carefully.’