ANOTHER Truss U-turn? PM REFUSES to stand by pensions triple lock as Hunt warns ALL departments will face brutal £40bn squeeze in Halloween Budget – but keeps vow to hike defence spending to 3% of GDP by 2030 after ministers threaten to quit

Liz Truss looks to be on the verge of yet another U-turn after Downing Street refused to stand by her vow to keep the triple lock on pensions.

The PM’s spokesman pointedly insisted the government is ‘not making any commitments’ when asked about the key policy.

The dodging will alarm pensioners who rely on the long-standing promise to increase payments by the highest out of inflation, wages, or 2.5 per cent.

It comes as new Chancellor Jeremy Hunt warns that no departments will be exempt from an ‘eye-watering’ £40billion squeeze expected in his Halloween Budget.

Mr Hunt announced yesterday that he was reversing £32billion of Ms Truss’s tax cuts, in a bid to quell market panic.

But the huge tightening is less than half of the estimated £72billion black hole in the public finances.

Treasury sources stressed not even health and defence will be exempt from the savings drive, with No10 refusing to repeat Ms Truss’s commitment to spending reaching 2.5 per cent of GDP by 2026.

However, the spokesman made clear that the vow to be spending 3 per cent of GDP on the military by 2030 will be kept.

Earlier, armed forces minister James Heappey threatened to resign if the idea was dropped. His boss Ben Wallace – seen as a leadership contender – has been making similar noises. 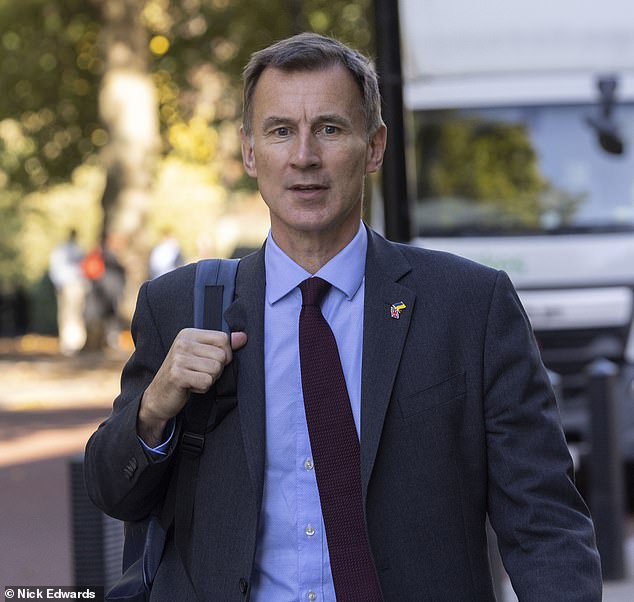 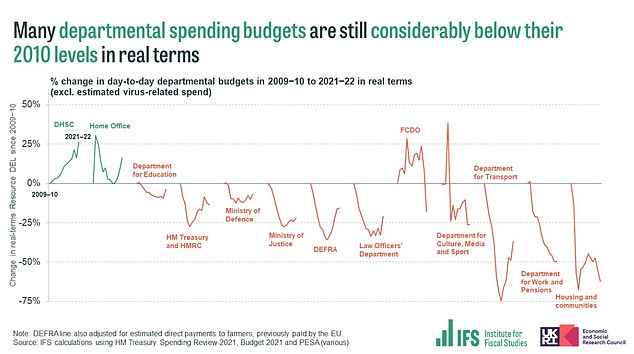 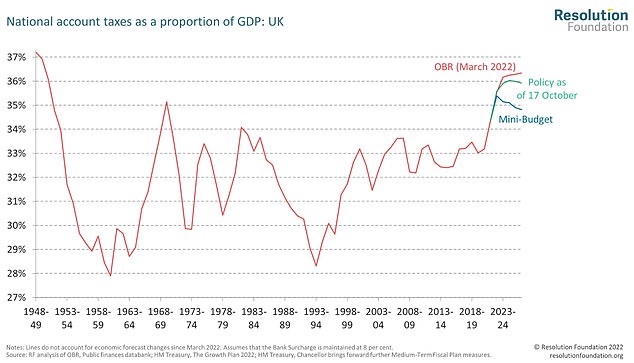 Now tax cuts have been jettisoned, the burden as a proportion of GDP is set to surge to a level not seen since 1950

Cabinet had a 90-minute discussion on the fiscal situation this morning, as ministers face making their submissions to the Chancellor.

Downing Street repeatedly refused to say whether the PM remained committed to the pensions triple lock.

The official spokesman said: ‘We are very aware of how many vulnerable pensioners there are.

‘Our priority ahead of this fiscal plan will be to ensure we continue to protect the most vulnerable in society.

‘The Chancellor has been clear – the Prime Minister and the Chancellor are not making any commitments on individual policy areas at this point.

‘But, as I say, the decisions will be seen through the prism of what matters most to the most vulnerable and we will be coming forward with further detail at the end of the month.’

Pressed on why Ms Truss was apparently ditching a commitment she made during this summer’s Tory leadership campaign, the spokesman added: ‘The Prime Minister is aware of the commitments made in this area and, indeed, to how many vulnerable pensioners there are.

‘The decision she has taken is to prioritise economic stability.

‘Her view and the Chancellor’s view is, at this point, it is not right to start pre-empting a collective piece of work that needs to be carried out across Government on all spending.’

The Prime Minister’s official spokesman said: ‘You’ve heard from the Chancellor on this.

‘We are obviously committed to maintaining the UK’s position at the forefront of Nato, that’s why the PM committed to raise defence spending to three per cent of GDP by 2030.

‘The shape of that increase will be set out at future spending reviews in the normal way and the Chancellor has obviously broeugh forward the fiscal plan to 31st October.’

Pressed on what he meant by the ‘shape’ of the increase to defence spending, the spokesman added: ‘The structure of how we get to that three per cent increase over a number of years will be determined in conjunction with the Ministry of Defence and the Treasury.’

Asked if No10 was backing down on the 2.5 per cent target by 2026, the spokesman replied: ‘The PM remains commited to increasing defence spending to three per cent by 2030.’

Meanwhile, the grim situation faced by Britons has been underlined with warnings that average energy bills could hit £5,000 a year, after Mr Hunt U-turned on the ‘guarantee’ to cap them at £2,500 until late 2024.

Now tax cuts have been jettisoned, the burden is also set to surge to a level not seen since 1950.

The Resolution Foundation think tank warned spending cuts could be as deep as those after the 2009 financial crisis, and that middle-income families may be unable to pay energy bills next year.

Chief executive Torsten Bell told BBC Radio 4’s Today programme there was a fiscal black hole of around £30billion even after the Government scrapped nearly all of its mini-budget.

‘These are big numbers. If we are talking of spending cuts between £30-40billion then they’re not that far off the scale of the cuts announced by George Osborne back in 2010,’ he said.

On the scaling down of energy support, Mr Bell said: ‘It’s a big deal, if he (Chancellor Jeremy Hunt) did scrap all of that he’s saving up to £40 billion, but it’s a big deal for households too because our bills are due to hit £4,000 in April. 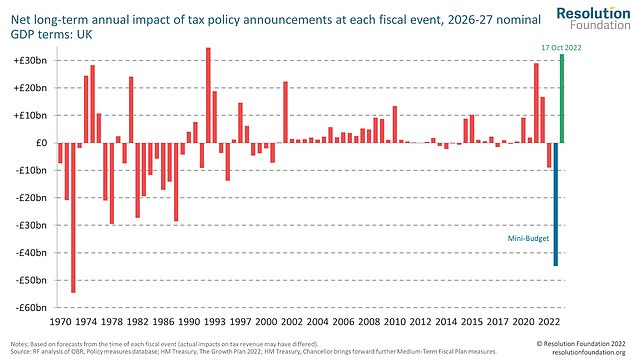 ‘I think really £4,000 is so large that even middle-income households won’t be able to afford those bills next year.

‘So he’s done the easy bit, scrapping the existing scheme, what he’s got to do is some hard work about how he intends to provide support for lower and middle-income households next year.’

Analysts Auxilione have forecasted average bills could hit £5,078 next year, while other estimates have predicted the Ofgem cap will be £4,350 in April.

In a round of interviews this morning, Mr Heappey stressed the Government still backs the defence spending target.

But asked if he would quit , he told LBC: ‘Yeah.

He insisted he would quit if that changed though, saying: ‘Yeah, we need to be spending 3 per cent of our GDP on defence of our nation by 2030 because there is no prosperity without security.’ 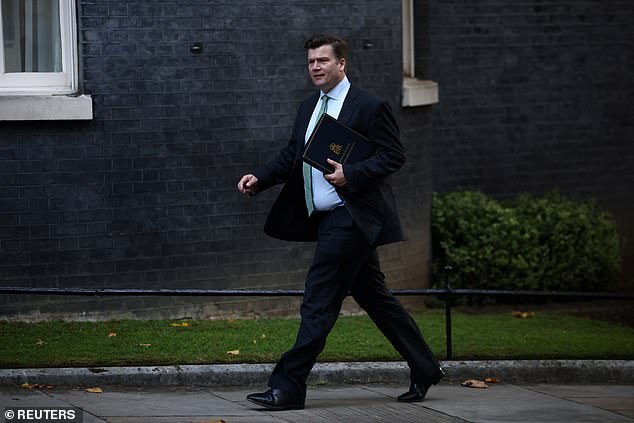