Victoria Police say internal investigations into the pepper-spraying and arrests of photographers at an anti-lockdown protest in Melbourne in 2021 have finished and no disciplinary action will be taken against the officers involved.

Police confirmed the officer who drenched Age photographer Luis Ascui in oleoresin capsicum (OC) spray was not reprimanded and was cleared of misconduct by the integrity unit despite the force paying a settlement to Ascui after he filed a lawsuit. 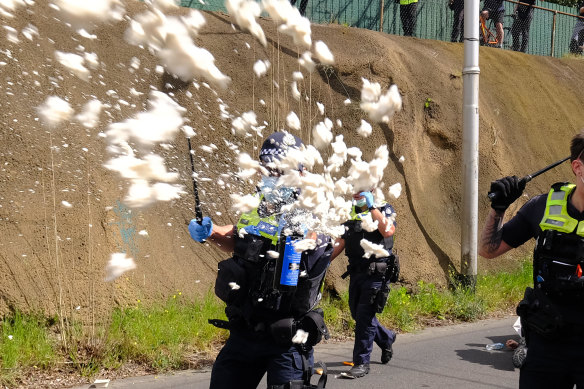 Age photographer Luis Ascui captures the moment he was doused in OC spray by police.Credit:Luis Ascui

Ascui was covering a protest in Richmond on September 18, 2021, when – after protesters broke through a police line – he took photos of an officer pepper-spraying a demonstrator lying on the ground before being sprayed himself.

The protest also resulted in 10 officers being injured and six being taken to hospital, while 235 demonstrators were arrested.

There has also been no disciplining of officers after two other photographers, Jay Kogler and Michael Currie, were doused with pepper spray, arrested and subsequently released without charge during the same rally in September 2021.

The Age can also reveal that police investigations into the incidents involving Ascui, Kogler and Currie were monitored by the Independent Broad-based Anti-corruption Commission.

IBAC has yet to finalise the outcome of its oversight, a spokeswoman said.

“There will be no further action taken,” the spokesman said.

On September 18, 2021, Kogler watched Currie get pushed against the wall and arrested in Waterloo Place off Swan Street, in Richmond, after demonstrators and media were funnelled into an alleyway. Prompted by the arrest, Kogler went in for the close up and was also arrested, he said.

“I looked down and I’m being grabbed around the collar by a police officer and I’ve got one on the other side of me. I’m like, ‘OK, I’m being arrested,’” Kogler said.

“They start putting my hands behind my back, but I’m still holding my cameras, and then they kick the back of my legs, and, like, throw me to the ground. I’m wearing a helmet and my head smacks into the ground.

“Then they punch me in the stomach and they yell stop resisting.”

They had both been working, Currie for Speed Media and Kogler for Alamy Live News, and had lanyards and media patches on their clothing. 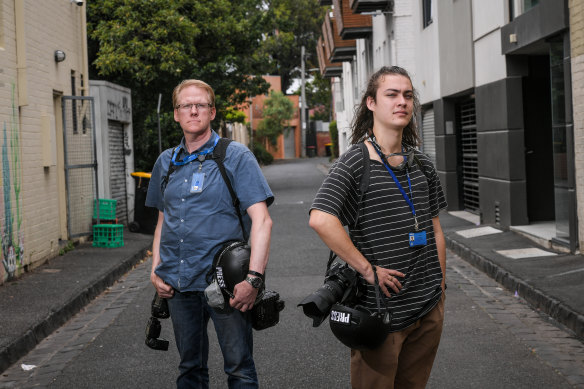 Before the photographers were arrested that day, a police line had been broken by protesters and bottles and debris had been thrown at officers.

Currie, not resisting and facing the wall, was counselling the arresting officer. He told the officer that he was part of the media, he said, and calmly put his hands behind his back.

A video shows Kogler being yanked from the pavement and thrown to the ground just a few seconds later after taking a photo of Currie’s arrest.

The use of OC spray is governed by strict rules that officers must adhere to.

“Police may also deploy spray where a person is involved in violent or other physical conduct and likely to seriously injure themselves or result in suicide.”

The Age also obtained and compared the two letters sent to Ascui and Currie by the Professional Standards Command, Victoria Police’s integrity unit, in response to their complaints. The letters were identical, including the reference number of the complaint. 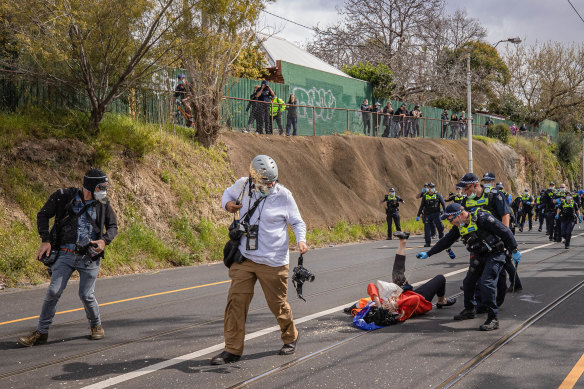 Age photographer Luis Ascui walks away after being pepper-sprayed by police during an anti-lockdown protest in Richmond.Credit:Jason Edwards/Herald Sun

“They just want to sweep it under the carpet. It is hugely important that these officers are brought to account, so we can continue to have media that can freely report on events without barriers. This is hugely in the public interest.”

Earlier in 2021, Herald Sun reporter Olivia Jenkins and senior photographer Jake Nowakowski were handcuffed and escorted from a park while covering an anti-vaccination protest at Fawkner Park.

Victoria Police quickly issued an apology and instituted a media accreditation system for reporters, which was subsequently scrapped.

“We learnt from this situation and put the necessary steps in place to ensure in future, more thorough briefings are delivered to members to avoid this situation happening again,” a police spokesman said. 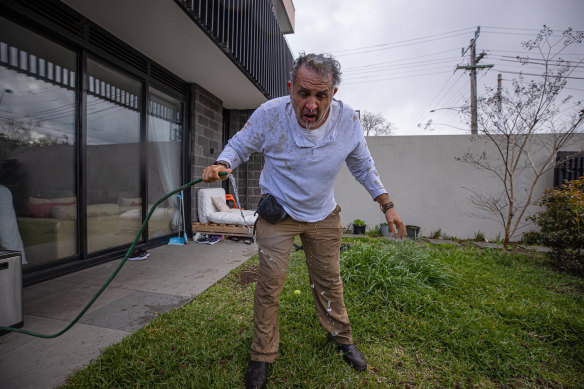 Luis Ascui washes his eyes out with water from a garden hose after being spray with OC foam.Credit:Jason Edwards/Herald Sun

Cassie Derrick, the director of Media, Entertainment & Arts Alliance (the union that represents members of the media), said journalists needed to have faith that when their rights were infringed by over-zealous policing, there would be action taken to send a message to all officers that it was unacceptable.

“It is disappointing that these grievous affronts to press freedom do not appear to have been taken seriously enough by Victoria Police to result in any sanctions or other action against the officers responsible,” she said.

“An apology is not enough. Journalists provide an essential service in keeping our community informed.”