Police are searching for protesters who lit flares, threw objects at police and damaged buildings during demonstrations against vaccine mandates after Victoria recorded 1252 new coronavirus cases and five deaths from the virus on Saturday.

Victoria Police said that on September 18 at 1pm, an unknown male set off a flare towards police officers during a protest on Bridge Road in Richmond. 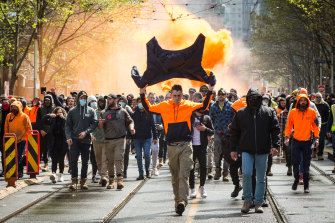 Another man sought by police launched a firework towards officers during demonstrations on top of the West Gate Bridge in Melbourne on September 21.

Police are also seeking two men after several cars were damaged on Rathdowne Street in Carlton on September 21. A spokeswoman for Victoria Police said during the incident, “several people charged at the Public Order Response Team and Highway Patrol vehicles”.

The CFMEU offices on Elizabeth Street were significantly damaged after “several people threw objects and missiles” into the front of the office.

Detectives have released images of the men they believe may be able to assist with their enquiries into the various events.

Investigators are urging anyone with information that may help identify these people, to contact Crime Stoppers on 1800 333 000 or submit a confidential crime report at www.crimestoppersvic.com.au

There are 299 people in hospital across the state with COVID-19, with people 22 on a ventilator. Of those in an intensive care unit, 42 still have an active case of the infection, while 48 have been cleared of the virus.

Victoria now has 11,257 active cases of the virus. More than 57,200 people were tested for COVID-19 across Friday, while just 4938 were vaccinated at a state run centre.

Protesters are expected to walk through the Melbourne CBD to Treasury Gardens on Saturday at 12pm for an event ‘against mandatory vaccination and passports’.

Victoria’s increase in active cases comes after World Health Organisation declared the new strain of COVID-19 that emerged in South Africa a variant “of concern” and named it Omicron, after the Greek letter.

WHO’s Technical Advisory Group said Omicron had a large number of mutations that made it concerning, and that preliminary evidence suggested “an increased risk of reinfection” compared to the other variants of concern, including Alpha, Beta, Gamma and Delta.